On the 20th anniversary of its founding, Alibaba will issue the "New Six-Vein Sword"

[TechWeb] on September 5, Alibaba announced today that on the occasion of the 20th anniversary, that is, September 10, it will be officially released to the public. 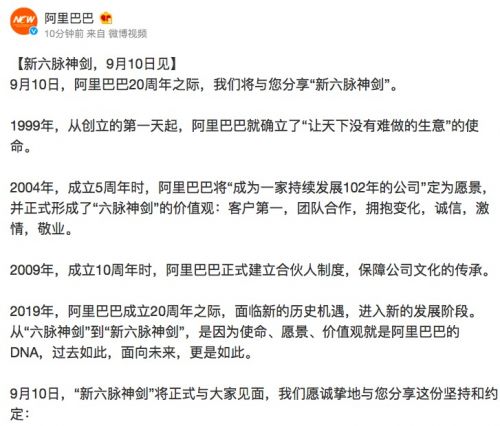 In 1999, from the first day of his founding, Alibaba confirmed

As far as we know,

Zhang Yong said, "We spend so much money and such a big investment to do this thing, the most important purpose is to find our fellow travelers, go to the future, go to 102 years, and go well in the next 5 years, 10 years, 20 Year of the same person. ”

Related news
HIV CURE FOUND
Huawei Xu Zhijun: new IP is a pure technical subject
Why does Huawei's "new IP" encounter new problems?
New street, a research institute, said: the research paper on pinduoduo has been seriously distorted by individual media
Anomaly six, an American company, resells mobile phone user information to the government
Hot news this week
Qualcomm lobbied the US government to lift the ban on the sale of components to China
Tencent re racing e-commerce, but does not want to make the next pinduoduo
Wechat in Apple's Google App store may be banned. What if wechat can't be used on iPhone
Tencent's response to wechat ban issued by the United States: under evaluation
Foreign media revealed White House documents: the ban may make apple and Google "off the shelves" tiktok
Xiaomi 10 supreme commemorative edition press conference Lei Jun's live rehearsal
After the sesame seed, Alipay's "financial points" is officially launched: let's see how much you have.
The United States blocked tiktok and wechat one after another: This is the real purpose!
Tencent launched the largest school recruitment in history, and these positions are most popular
Votebymail is dedicated to helping American voters easily apply for postal ballots
The most popular news this week
Samsung Galaxy Tab S7|S7 the launch of a new generation of flagship tablets
Samsung launches Galaxy budds live Bluetooth noise reduction headset: from 1199 yuan
Blood oxygen electrocardiogram monitoring Samsung announced Galaxy Watch 3 price of 2999 yuan
Samsung releases Galaxy Note 20 series of mobile phones :12 512GB emperor's edition 9999 yuan
Blue light not only hurts the eyes: it can also increase the risk of depression
Is it feasible for Huawei's "Tashan plan" to beautify 45 / 28nm production line?
Huawei is just 30
Net profit of Netease in the second quarter was 5.2 billion yuan, up 33.3% year on year
Why does the game book need 144hz high refresh rate? Lu Weibing hit the nail on the head
Foxconn: "the era of China as the world's factory is over" is an over interpretation of the media