Hefei, China,5 September (Reporter: Wu Lan) China Science and Technology University and the China Polar Research Center Research Team, for the first time in the world, made a clear observation of the most bright objects in the universe

This achievement, which has made important progress in the research of fuel supply for quasar central engines, was published in the international authoritative academic journal Nature on the 5th.

There are supermassive black holes in the center of each galaxy. 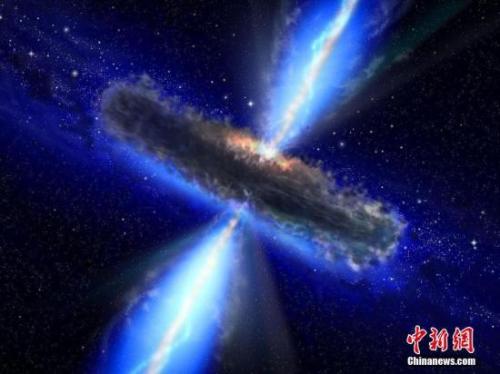 The process by which quasars convert matter into energy through accretion disks is clear, but the mechanism by which accretion disks continuously obtain material supplies remains unclear. Astronomers assume that the supply of this material is inward. However, the last piece of mosaic is still missing in the verification of the inward flow: the inward flow near the accretion disk has never been clearly observed because of its too small apparent scale to be spatially distinguished.

Using this absorption line as a probe for the inflow gas, the researchers detected the influx in the host galaxy of eight quasars, and calculated the velocity of the inward flow of matter as high as 5000 kilometers per second based on the size of the Doppler red shift, and the velocity was continuous between 0 and the highest velocity, and it was clear by further calculation that the black hole did this.

It is reported that the results will provide a new starting point for understanding the problems of quasars and supermassive black holes. At the end of the meeting, the