Most hard drives andSSDExposing its storage capacity through a block storage interface, where the driver stores blocks of fixed size (usually 512 bytes or4KB) and they are identified by logical block addresses, usually 48 or 64 bits. The key-value driver extends the model so that the driver can support variable-size values instead of fixed-size LBA, and variable-size values instead of fixed 512B or 4kB blocks. This allows key-value drivers to be used more or less as alternatives to software key-value databases such as RocksDB and as backends for building applications on key-value databases.

When used to replace software - based key - value databases, key - value SSDs are possible from.The serverCPU unloads a large amount of workload. More importantly, moving the key-value interface to SSD itself means that it can be tightly integrated with the flash conversion layer of SSD, thus reducing the overhead of analog block storage devices and tiering variable size storage systems. This means that key-value SSD can run at lower write magnification and higher performance than the software key-value database, with only one layer of discarded data to be collected in the stack, not one layer in the SSD and one layer in the database.

Samsung has been working on key-value SSD. They have been developing open source software to support key-value SSD, including the basic libraries and drivers needed to access key-value SSD, as well as sample benchmarking tools and the back end of Eph. Samsung platform development suite software for key-value SSD initially only supports Samsung's own software API. Today, it also supports supplier-neutral SNIA standard API. It is an API independent of advanced transmission and can use NVMe, SAS or SATA interfaces. 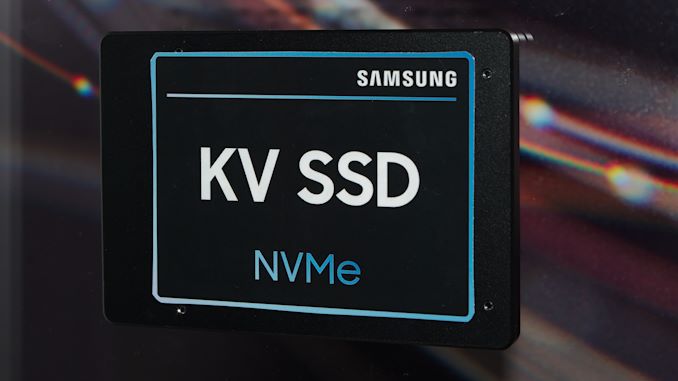 Related news
Huawei self-developed SSD secret: the only domestic TOP10!
PCIe 4.0 SSD is unprecedented prosperity! Regret for not supporting it
Samsung announced the release of key-value SSD prototype that meets industry standards
Lenovo notebook mixed with Samsung and domestic SSD official response: general practice in the industry
Microsoft xsx host creates a new category of SSD Seagate hard disk
Hot news this week
Yao Ting, a "gifted girl" who won Huawei's 1.56 million yuan annual salary, responded: what does salary not mean
Qualcomm lobbied the US government to lift the ban on the sale of components to China
Tencent re racing e-commerce, but does not want to make the next pinduoduo
Tencent's response to wechat ban issued by the United States: under evaluation
Xiaomi 10 supreme commemorative edition press conference Lei Jun's live rehearsal
Wechat in Apple's Google App store may be banned. What if wechat can't be used on iPhone
Ali 88vip bought value: you can get Netease cloud music black glue annual card for free
Tencent launched the largest school recruitment in history, and these positions are most popular
The United States blocked tiktok and wechat one after another: This is the real purpose!
Votebymail is dedicated to helping American voters easily apply for postal ballots
The most popular news this week
Lei Jun gave a 4-hour speech on Xiaomi's 10th anniversary
Lei Jun gave a 4-hour speech on Xiaomi's 10th anniversary
The second half of Xiaomi's 10th anniversary speech
"Go ahead" of Xiaomi 10
The world's first mass-produced transparent TV: millet transparent TV price: 49999 yuan
Nokia mobile phone maker HMD received $230 million investment from Google and Qualcomm
Parallels Desktop 16 Release Support Big Sur Better Performance Multi-touch Gestures
The latest statement by the founder of SMIC: the ability of the United States to restrict China is not so strong, but it should not be taken lightly
Don't do the next TikTok Zoom Give up China and choose India
Google: making 34 billion dollars a year can't stop the middle-aged crisis