along withIntelWith the launch of the 10th generation Core processor, RedmiBook 14 is a step forward. It is not only the first light book to carry 10 generations of Core processor, but also continues to maximize the performance-to-price ratio. And in addition to the previous moonlight silver, new deep space ash, if snow powder two colors, to meet the personalized needs of different users. This is the protagonist of our review today, the RedmiBook 14 enhanced lightweight notebook. 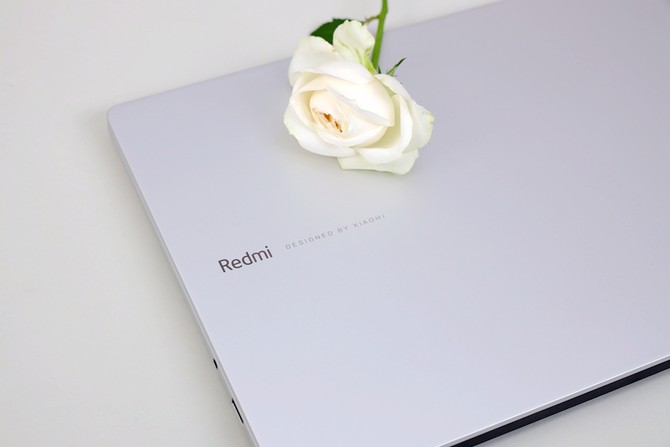 Less than a month after the launch of the mobile version of the 10th generation Intel Core Processor, major brands of light notebooks are ready to launch, and the enhanced version of RedmiBook 14 is the first batch of notebooks equipped with the 10th generation Core Processor, which is an excellent opportunity for users who want to experience new products in the first time, not only It's exciting and happy. 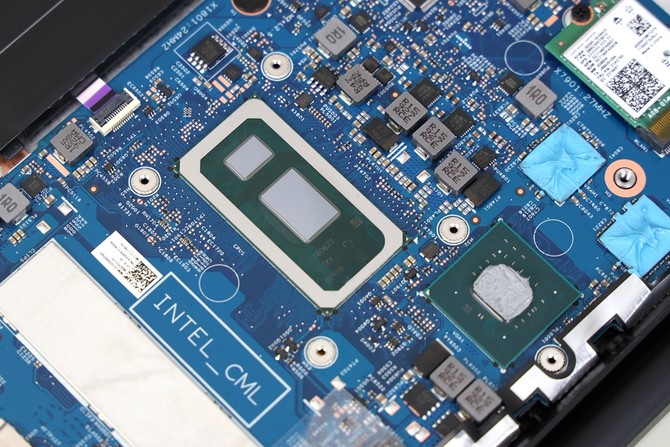 Intel has officially announced a 10-nm process at the Taipei Computer Exhibition at the end of May this year, code Ice Lake's 10th-generation Core processor, but the system-level features and specifications, as disclosed at the time, are not specific to the product model, parameters. In early August, Intel has officially released up to 11,10-generation Core processors, designed for lightweight notebook designs, including low-power U-series and ultra-low-power Y-series. The Comet Lake architecture, a 14-nm process processor, will take the lead as a pioneer in the 10-generation Core to meet with you, and then launch a 10-nm, Ice Lake-based product. 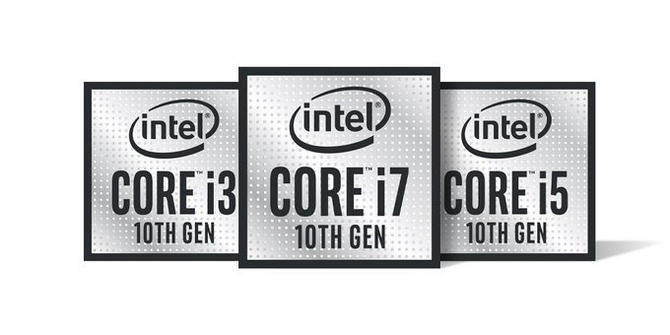 The 10th generation of Core processors began with changes in stickers, after blue stickers were replaced with flattened technology silver, with CORE i3/i5/i7 and a 10th generation logo on the stickers. In addition, 10 generations of Core have changed a lot in naming rules, and there is no longer much popularity here. You can see that the five-digit segment at the beginning of 10 is the 10-generation processor, and we still return to this new RedmiBook 14 enhanced version, as well as Intel Core i5 ≤ 10210U. 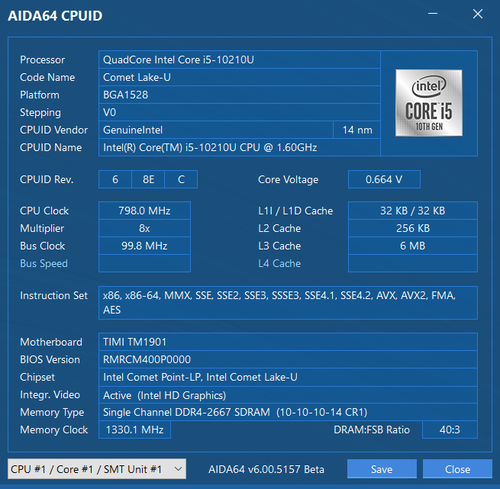 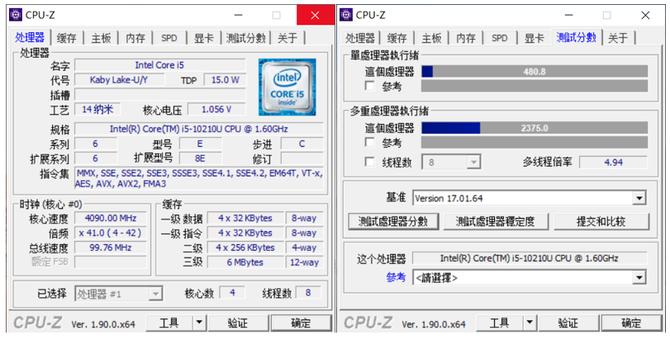 This processor is basically the same as the previous generation i5-8265U in terms of parameters. In addition to the changes in the architecture, the three-level cache increased to 8MB, the frequency also increased, and the integrated graphics card also changed, which means that UHD graphics card no longer involves digital models. In addition, in terms of memory support, Core i5-10210U can support DDR4-2666 specifications. 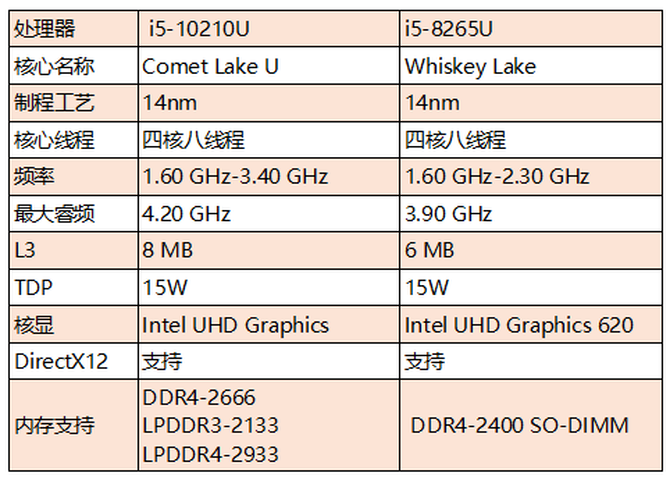 Next, I'll take a look at the performance of this 10-generation Intel Core i5 / 10210U processor.

Fritz Chess Benchmark is a software to test the processor's multi-core processing ability. The test method mainly depends on how many steps a computer can take in a second. Intel Core i5-10210U has 4 cores and 8 threads. The final score is 13636 steps. The multi-core performance is 20% higher than i5-8265U. 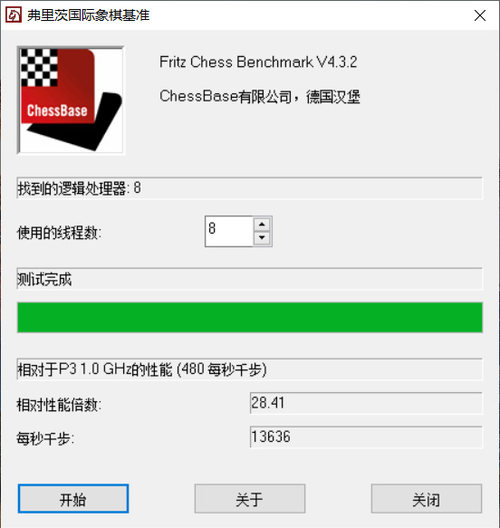 The Cinebench R15 is also a software that tests the performance of the processor, where Intel Core i5-10210U has a multicore performance score of 736cb, up 10% from the i5-8265U. 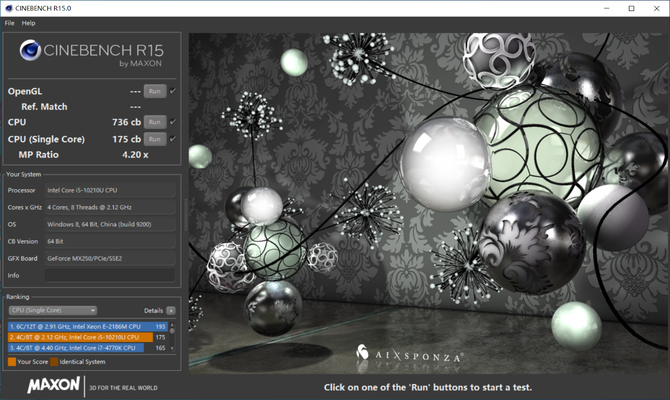 Cinebench R20 is the latest version, which can make greater use of the computing power of the processor, but the result can not be directly compared with or converted to the result of inebench R15. The final score of R20 was 1607 CB for multi-core tasks and 427 CB for single-core tasks. Overall, its performance has been significantly improved compared with the previous generation. 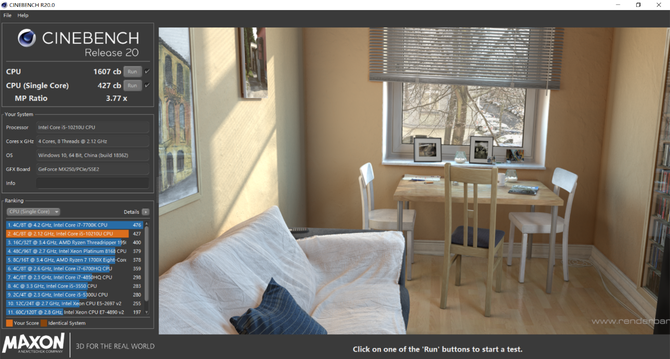 The launch of the 10th-generation intel's core processor has made lightweights more robust in multitasking, and has given lightweight laptops a new lease of life, as well as the launch of new mobile processors that stop squeezing toothpaste and continue to take the lead in the mobile pc camp.

This RedmiBook 14 enhanced notebook is all standard with Nvidia GeForce MX250, which is consistent with the previous generation. It is also a high-end lightweight notebook. The specific parameters of MX250 graphics card are no longer mentioned. After all, it is a high performance-cost graphics card that has been launched for a long time and can withstand the test. 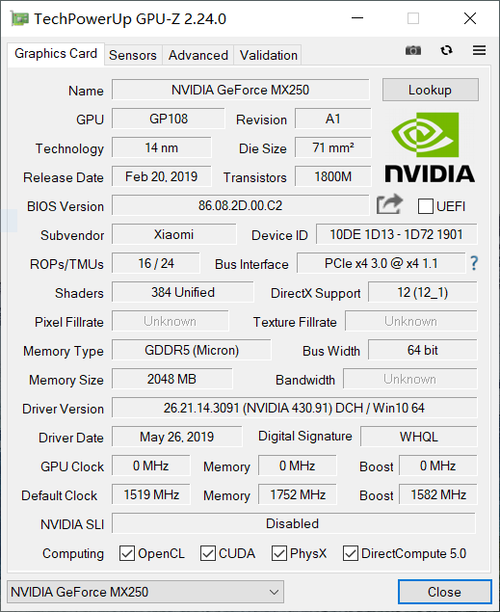 This time we selected the professional mode test in 3DARK 11, the final score P4918, and the combination of the 10-generation processor MX250 also has a powerful performance. 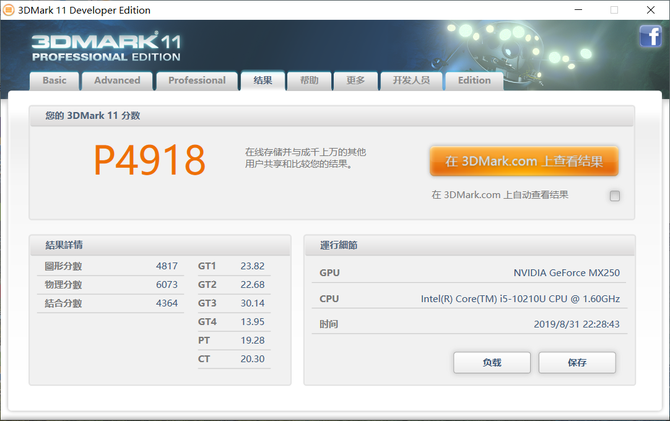 In the latest advanced version of 3DMARK, we tested Fire Strike and Ice Storm Extreme, with final scores of 3461 and 59919, respectively, so that the proud performance of this notebook, especially the graphics card, can be evaluated comprehensively. Such achievements also mean that the enhanced version of RedmiBook 14 has sufficient confidence and assurance in dealing with daily work and entertainment.

With the addition of the 10th generation Core processor, as well as MX250 independent graphics card, will there be some improvement in the performance of the game? Next, let's take a look at League of Legends, who is most familiar with you. At the beginning of the game entry or relatively smooth, man-machine mode, 1080p full screen, medium quality.

In the course of the game, the number of frames occupied 30% of FPS, processor resources, 72 °of temperature, 56% of graphics card resources and 64 °of temperature. The game runs smoothly and the picture quality is clear. The comprehensive experience has been slightly improved compared with the previous generation i5265U MX250 combination, which is also a good performance for the 10th generation i518210U, which is located on the mobile office platform.

In terms of memory and hard disk, the RedmiBook 14 enhanced version is basically the same as the previous generation. Single-channel 8GB DDR4 memory, 256/512GB solid-state hard disk, although good in terms of capacity, but single-channel memory and SATA interface solid-state hard disk, obviously pulled down the grade, fortunately, the performance of its testing and experience is quite good as far as the configuration is concerned, and there is no pressure to deal with daily office and entertainment.

The sequential reading speed of the hard disk is 550 MB/s and the writing speed is 529 MB/s, which exceeds the nominal parameters. So we see that RedmiBook 14 is configurated in accordance with the principle of ultra-high cost-effective, so that users can save the budget that should not be wasted when they use it sufficiently.

Finally, let's take a look at the heat dissipation and durability of this enhanced version of RedmiBook 14. The thermal power consumption of the 10-generation Core i5-10210U processor is 15W, so there is no need to change the heat dissipation solution. It can be seen from the disassembly that the enhanced version of RedmiBook 14 uses a larger diameter heat dissipation.electric fanThe integrated connection of radiator tube from CPU to graphics card, wide diameter and short distance, together with the design of rear heat sink, makes the whole machine have excellent performance in heat dissipation, such as in the ultra-long, multi-task mode, the whole machine can still be used smoothly.

The AIDA64 is very stable for 20 minutes, and the processor utilization is 100%, but the temperature is always below 70 °.

After that, the maximum temperature of C plane is 51.4 °, which is located at the heat sink in the back of the notebook, and the keyboard area is basically unaffected. The highest temperature at the bottom is 54.5 °, which is also the area of CPU, which is perfectly covered by the ventilation grid in the four areas at the bottom.

In terms of endurance, the enhanced version of RedmiBook 14 contains a 48Wh, 3220 mAh lithium-ion battery.

The condition of the test is to close the wireless and Bluetooth connection, the screen brightness is 25%, the stay is still clearly visible, the battery usage mode is the power-saving mode, and the remaining time is about 9 hours and 35 minutes from the battery icon.

Although it has a strong performance, the RedmiBook 14-Plus, after all, faces a young user, such as a student group, a new job, and so on, so it's also attractive in terms of appearance. So let's look at the design of the RedmiBook 14-enhanced version, after all, and a lot of users may be in first contact.

In addition to moonlight and silver, the new RedmiBook 14 enhanced version of the light and thin notebook computer adds two new colors: deep ash and snow powder. Consistent with previous generations, the design is still very small and fresh. The LOGO of A-side Redmi and the tail of Design By XIAOMI both show identity and make the whole A-side more low-key and luxurious. All-metal lightweight fuselage to 1.5kg, travel, or students brought to the library, classroom, handbags, wherever they go will not become a burden.

Full-size keyboard, integrated touch panel, delicate feel, smooth and accurate control. The power button is located in the upper right corner of the keyboard area, which integrates with the keyboard to make the whole C surface more concise. It would be better if we had an LED backlight.

In the lower right corner of the palm support is the 10th Intel Core processor sticker. It is worth mentioning that this notebook is not only pre-installed in the original versionMicrosoftWindows10 family Chinese version system, also pre-installed value 748 yuanHome and Student Edition, which can be used free of charge, greatly reduces the user's expenditure, but also saves a lot of maintenance time.

In terms of interface, the enhanced version of RedmiBook 14 is also practical, with 2 USB 3.0, 1 USB 2.0, 1 full-size HDMI and 1 3.5 mm headhole. It's a pity not to have a Type-C interface, probably considering that this is not a necessary configuration for everyone.

It is also worth mentioning that the enhanced version of RedmiBook 14 also carries DTS professional audio system, so it provides quite good audio-visual experience in video entertainment. Whether it's without headphones or sharing videos with students in the dormitory, the sound effects of this notebook will certainly not disappoint you.

Personalize and interact with one anothe

In the RedmiBook 14 notebook, there are two personalized application interactions, one is the pre-installed "millet pictorial" application, and the other is millet intelligent unlock 2.0.

Xiaomi Illustrated is mainly to provide users with a large number of high-definition desktop wallpaper, and through the settings, you can also choose the wallpaper rotation update time. This allows your desktop to maintain a different face every day, even unknown wallpaper, will make you have a feeling of expectation.

Millet Pictorial provides recommendation, discovery, popular and local menu in navigation. It can not only browse the local picture library, but also browse more massive wallpaper library. Click on a wallpaper, you can also view wallpaper-related information; click on the following smalltelevisionThe icon can also set this wallpaper as a desktop, very sweet and fun.

Another is the application of Millet Intelligent Unlock 2.0, which is also a continuation of the features of the previous RedmiBook 14. We know that the system login mainly includes account password, PIN code, fingerprint identification, Windows Hello face recognition, etc. Account and PIN password are the most basic, but they are the most cumbersome and unsafe two kinds of login. The application can be quickly unlocked and secret-free login by binding with millet Bracelet 3. In addition, for the latest millet Bracelet 4, firmware will also be updated in the near future to achieve binding with RedmiBook 14 enhanced notebook.

After all, thanks to the large user base of the Xiaomi bracelet, if you also have the Redmi Book 14 enhanced version of the notebook at the same time, and Xiaomi bracelet 3 binding settings, when you need to log in to the system, in a certain range, the computer sense the bracelet, no need to enter the PIN code, you can quickly log in to the system.

The RedmiBook 14 Enhanced Light and Thin Notebook has opened its appointment and will be available on September 6 at 10:00 a.m. for sale on a full-platform basis.

Recent users who want to start notebooks, pay attention to cost-effectiveness and appearance, can use millet mall, millet home, quality, milletJingdong/ Skycat/SuiningFlagship stores and other channels for booking, don't forget, September 6 at 10 a.m. to buy, less than 5,000 yuan price can immediately have the latest 10-generation Intel Core Processor laptop, RedmiBook 14 enhanced version, you deserve to have!