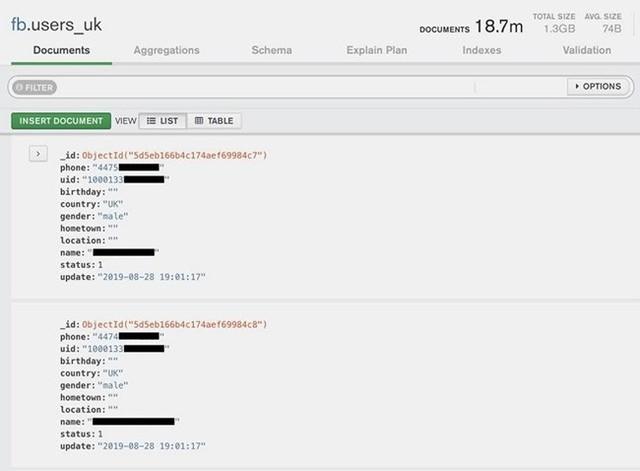 Among the information related to the Facebook account disclosed this time, it contains 133 million Facebook users in the United States, 18 million British users and more than 50 million Vietnamese users.

The spokesman said the survey found that only about 210 million of the 419 million public Facebook accounts were actually leaked user data, while the rest were mostly repetitive. At present, the Facebook related team is further investigating the matter.

It is worth mentioning that Sanyam Jain, a security researcher, found that through these leaked Facebook accounts, attackers are likely to use the ID account of their logged-in users to modify their passwords.Mobile phoneAnd other information to turn it into a fraudulent account.

A Facebook spokesman said that despite this[计] serveIt has been made public on the Internet, but there is no evidence that a Facebook account has been hacked and the database has been urgently deleted.

Related news
Facebook's share price rebounded after being fined $5 billion by the U.S. government
More than 419 million account information leaked Facebook response: database deleted
Another scandal on Facebook: 270 million user names and phone calls flow to the Internet
Why does "one more thing" Apple make its own chips?
Hot news this week
Wechat has not done this function for N years! Use this app to make up for the defects of wechat
IPhone 12: it's more like throwing away the charger
Gree's response to "being disqualified from winning the bid": a mistake made by the bidder in sorting out the materials
NASA's face touching Necklace: vibration warning to prevent the spread of new coronavirus
Microsoft official free data recovery tool windows file recovery experience
Apple wants to know: what do you do with the charging head of the old iPhone?
Amazon cancels disposable plastic products in India
Luo Yonghao comments on ideal one: Tesla Model 3 is not a car of a level at all
Tencent magic change Yang surpasses video self mockery: I'm a simple and honest fake spicy sauce lost 16 million
A 400-brand evacuation Facebook： the internet giant strangled?
The most popular news this week
Global digital camera sales dropped 90% in 10 years! Cell phones are killing the camera
The endless fall of Chinese Internet people in the dark under the Indian ban
Tesla's autopilot suddenly accelerates into a truck! Car owner picks up a life recorder video exposure
Small power technology to be listed on the gem: Tencent shares about 10% or become the first share of shared powerbank
WeChat announces 20 million official account "to be successful"
A new version of the Windows 10 experience with a new start menu and a redrawing icon refresh the system
how to enable Windows 10 brand new start menu?
Tencent PK old Ganma: the storm is suspended, the question remains
Windows 10 new start menu design more information exposure
Behind Intel's "out of stock" wave: is it really a false alarm?