Is the university's "knock-on brick" gone? After the suspension of the NOIP competition, the Chinese Computer Society introduced alternatives 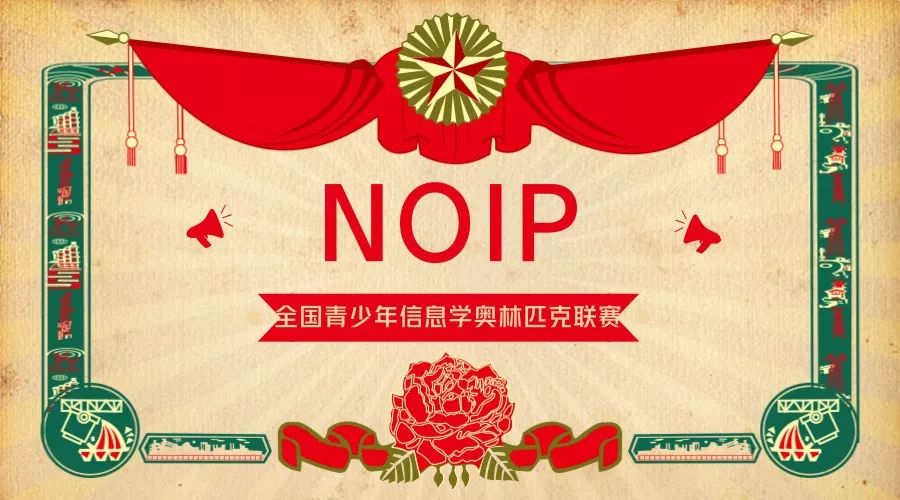 [Introduction to Xin Zhiyuan]Last month, the CCF website announced that

In the middle of last month, the Chinese Computer Society (CCF) released its official website and Wechat Public Number.《CCF Announcement on Suspension of NOIP CompetitionThe full text of the announcement is very brief with only one sentence:

As soon as the news came out, many computer students, practitioners and former NOIP contestants were surprised and puzzled. What exactly caused the CCF not to disclose, but the outside world speculated and 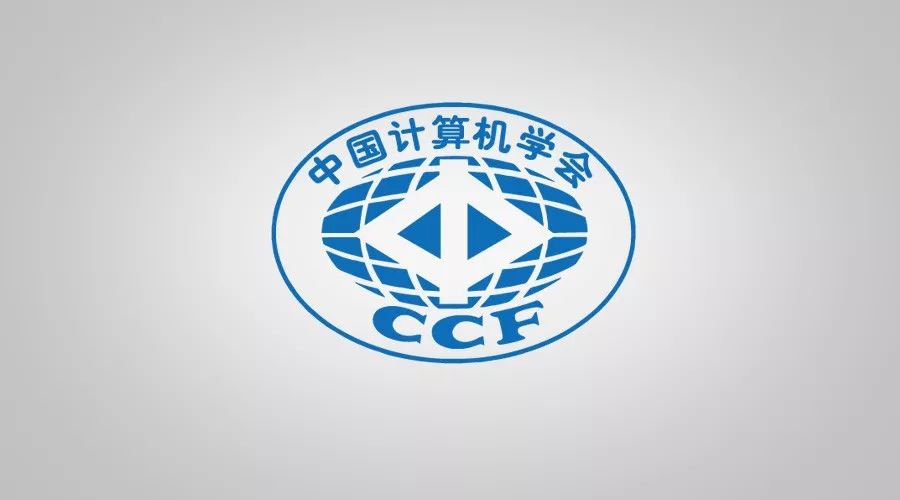 Just yesterday, CCF released the CCF Registration notice for hosting CSP-S/J, and netizens speculated that it was NOIP's.

According to the introduction, CSP non-professional level is simpler than professional level, divided intoCSP-J(entry level, Junior) andCSP-S(Senior) Two levels.Both involve algorithms and programming.。 Anyone can sign up. CSP-J and CSP-S hold two rounds respectively: CSP-J1, CSP-S1, CSP-J2 and CSP-S2. The authentication methods are on-site authentication and non-network authentication. To participate in the second round of CSP-J/S, the first round must be attended first, and only those who have reached a certain score can participate in the second round. In 2019, the first and second rounds of CCF CSP-J and CSP-S will be held in October and November respectively.Registration time:The deadline is 24:00 on September 6-26, 2019.Registration website:Http://rg.noi.cn/Authentication process: 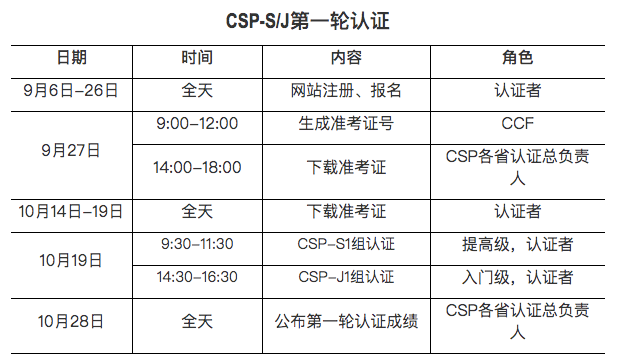 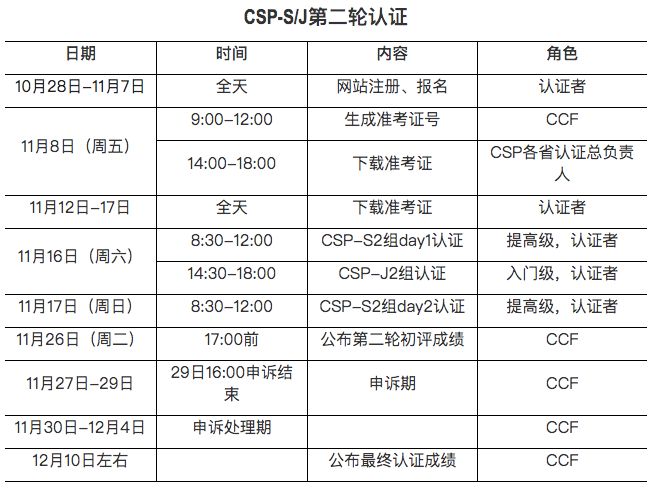 The organizer is still the original NOIP organizer. CSP-S/J wins prizes or fails to qualify for college escort.

Network transmission, the Chinese Computer Society has authorized the original NOIP provincial and municipal sponsors to be CSP-J/S certification units, so it can be inferred that the sponsors of CSP-J/S are still the original NOIP organizers. 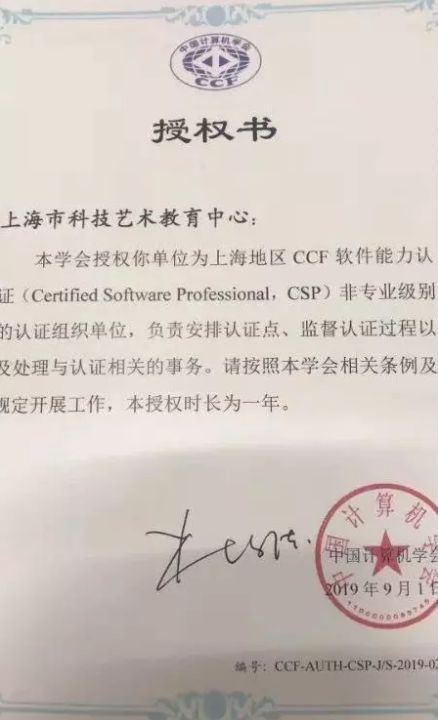 Secretary-General of CCF and Researcher of Institute of Computing, Chinese Academy of SciencesDu ZideThe circle of friends forwarded the CCF notice and commented:

After the suspension of NOIP competition, there was a small disturbance in the society. Some people asked: Why did it stop? Answer: No money! Many parents call and ask: Without NOIP, what will our children do? Answer: Don't be impatient later! No, here it is! Sign up now! If you ask: Who, who and who approves? Ask: Who, who, who and who? Now let's tell you the final answer: If your child is not received, no one can approve it. If you're not sure, don't take this one. Suggest taking the Computer Level Examination. That's acceptable. By the way, that's not free. 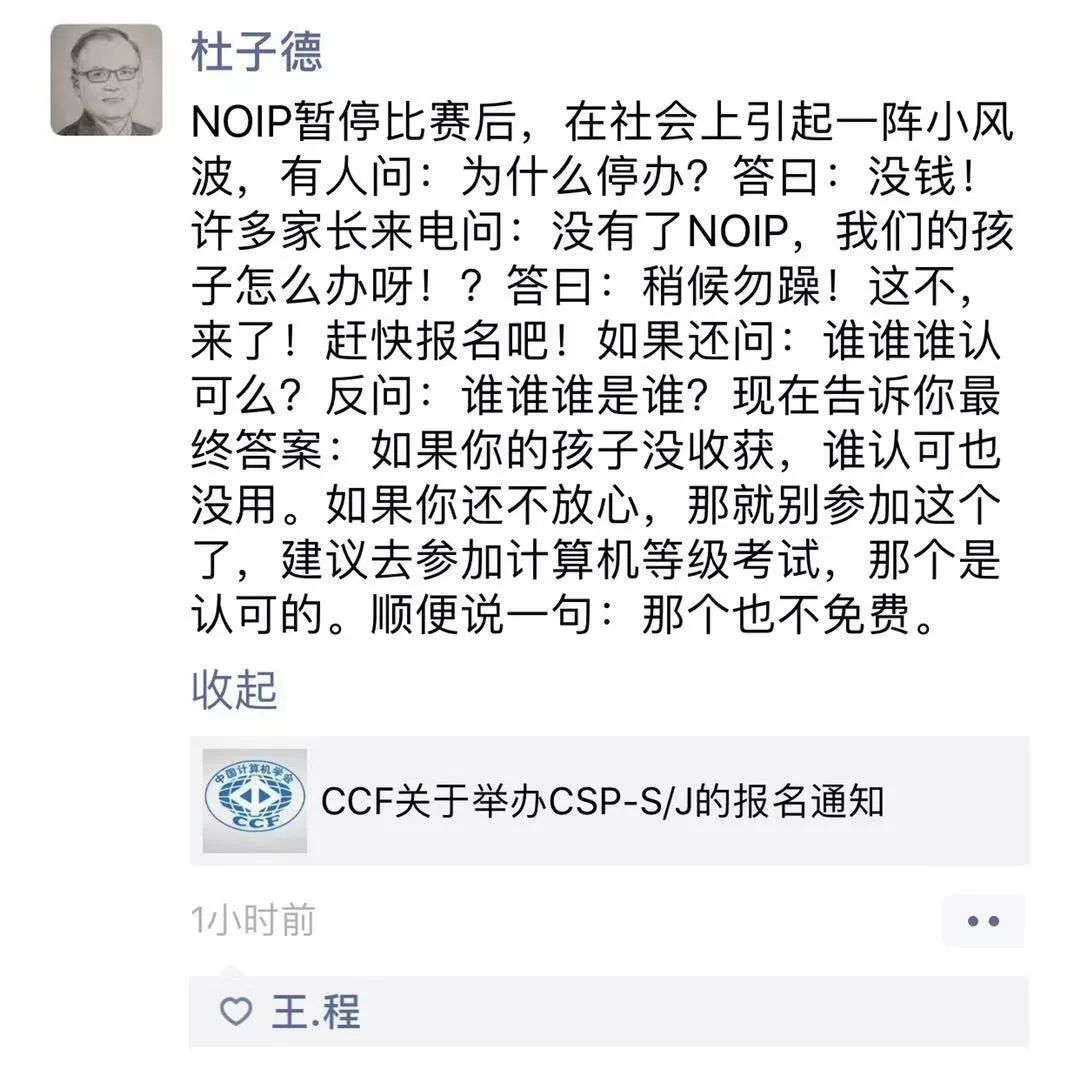 At present, the biggest difference between CSP-S/J and NOIP is probably thatCan you get the qualification of College escortNop is of great significance to contestants and is regarded as a university 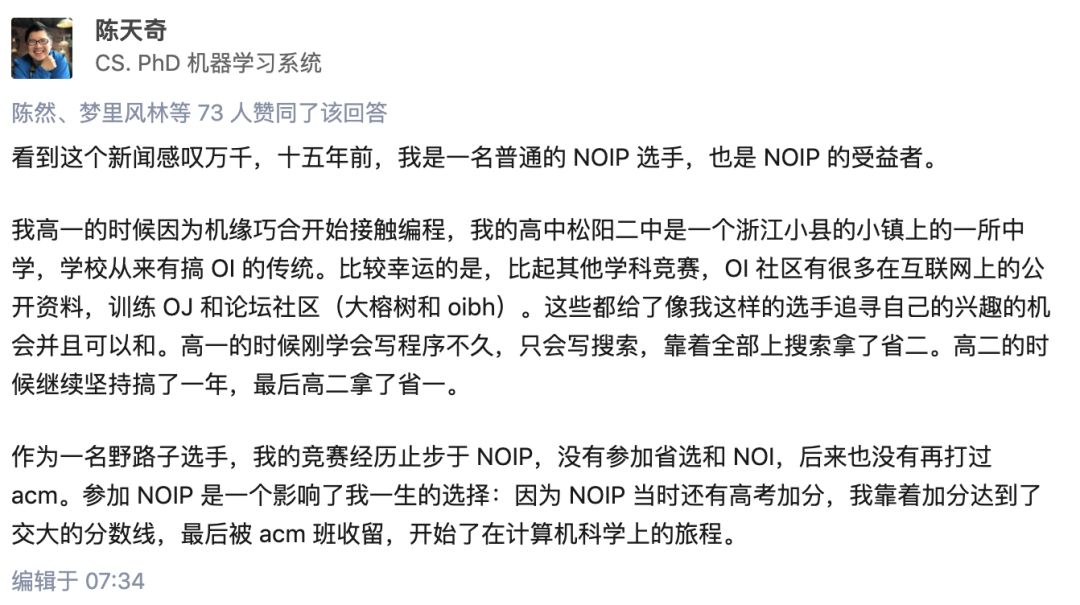 According to Wikipedia, NOIP is an informatics contest and popularization activity for middle school students in China. Its sponsor is CCF, the Chinese Computer Society. The Society was founded in 1962. It is a national first-level society with an independent corporate body. It belongs to the Chinese Association of Science and Technology. It is a promotion of computer academic progress and technological success. The academic organization of fruit application.

CCF officials say the purpose of NOIP is

At present, contestants can choose to use C, Pascal three programming languages, the initial language test questions are different, the rematch test questions are the same. The specific content is reflected in the outline of the competition.

Examination forms are divided into preliminary and secondary competitions; according to the participants, they are divided into popularization group (mainly junior high school) and improvement group (mainly senior high school) but not limited to grade. It is slightly more difficult to improve the group than to popularize the group. Beginning this year, the preliminary contest will be changed from written test to computer test.

NOIP is of great significance to contestants, who generally regard NOIP as a university.

Before 2011, the Chinese college entrance examination paid more attention to the winners in all kinds of Olympic competitions.

According to the current regulations of the Ministry of Education on the selection conditions of students on escort in the Measures for Recruitment and Delivery of Higher Learning Institutions, all the senior high school graduates who have won the first prize of NOIP have the qualification of escorting them into higher learning institutions. This year, there are also many outstanding students who are escorted to the Yao class and the Intellectual Class in Tsinghua through the informatics competition.

In the future, we still have to ask whether the CSP-S/J first prize can be guaranteed to enter colleges and universities. But as Du Zide said:If your child doesn't get it, it's no use for anyone to approve it.。

Related news
Is the university's "knock-on brick" gone? After the suspension of the NOIP competition, the Chinese Computer Society introduced alternatives
Stop running Informatics Olympic League and launch New Certification by Chinese computer Society
Microsoft bet that Windows 10 IoT: provides smart edge computing support for Society 5.0
IEEE Computer Magazine will be published in Chinese in 2020
Hot news this week
China's second-biggest retail channel for smartphones in May Huawei is a step away
Huawei cloud's industrial Internet business experience: how to make the cloud serve the entire "circle of friends"?
After the total ban, the United States announced the arrest of Fujian Jinhua General Manager Chen Zhengkun!
Most people don't know that the hole at the bottom of the original mobile phone also has this function
Japanese legislation forbids walking and playing mobile phones: mobile phones in public places should stand still
A reporter from the United States who was infected with the new coronavirus took part in the trump campaign rally
Synergy Research released 2020Q1 China public cloud market report Baidu Intelligent Cloud stable third
Japanese media: invest 800 billion yuan in ten years, Tsinghua Ziguang self research memory will come out in 2022
Most people don't know that the hole at the bottom of the original mobile phone has this function
Is the market value of hundreds of billions of dollars really overestimated?
The most popular news this week
How to solve the advertising bombing of the circle of friends? These wechat tips are very useful
5g's first evolution standard announced completion of integration of Chinese wisdom into international standards
Microsoft's push Edge browser has turned users into angry Chrome
Facebook develops neural supersampling technology to counter DLSS
Apple will launch a new local gold iPhone 12: high end version only
Internet Association calls for no unilateral digital tax in future Anglo American trade agreements
Tencent after raising geese in Guizhou: we raise "chicken" in Qingyuan
really need a WiFi 6 router?
Microsoft launched Pylance improve Python experience in VS Code
Apple may launch new gold color for iPhone 12 Pro Max to complement bronze note 20 ultra