Review of Apple's Autumn Release: New iPhone Hardware Pricing Up and Down Pro Suffix for the First Time

If the hardware that is updated every year isAppleThe beautiful body, then the system software, content service is Apple's interesting soul. 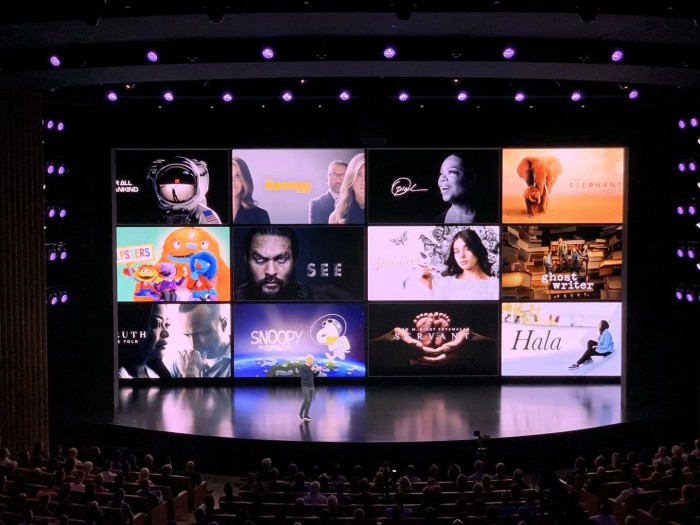 Accompanied by a theme: "Provide to the end of the userBeautiful"Products, users can create perfect things" short film, Cook arrived as scheduled, began the conference. First of all, we will focus on launching the Apple Arcade Game Store again. The exclusive games in the store are compatible with the whole platform of Apple and can run on the iPhone at the same time.IPadMac and Apple TV. The interface of the game store is similar to that of the App Store homepage. It has a personalized recommendation page. Every user can find his own game.

Subsequently, Colome, Capcom, ANNAPURNA and other game makers came on stage to introduce their own game Demo. Apple Arcade's exclusive game makes full use of the performance of Apple devices in terms of graphics and sound effects, bringing about relatively immersive effects. Apple Arcade will be launched on September 19, and the Family Solution will be able to enjoy games in stores for $4.99 a month.

Then came the Apple TV Plus service, which introduced a few of the first home-made dramas. From the choice of actors to the script, they were all selected by Apple and broadcast exclusively in Apple. These dramas have a good media reputation. Cook also announced on the spot that the first home-made drama will be launched on November 1, followed by a monthly new drama, which the family plans to sell for $4.99 a month, and Apple products can be purchased for free to members for a year. 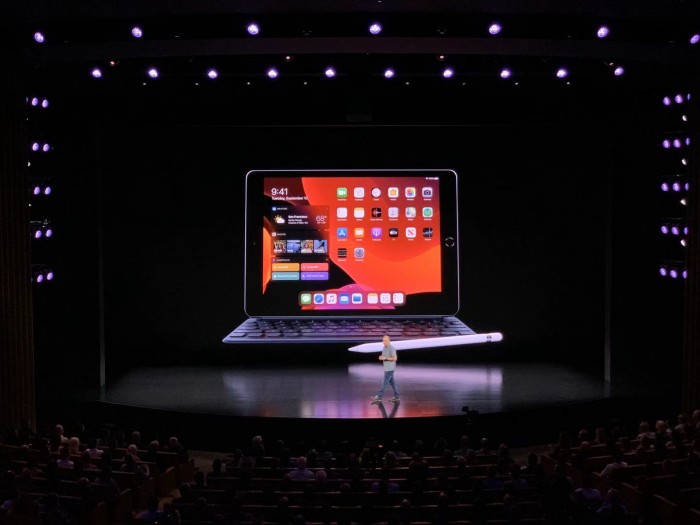 WIt is not surprising that Apple attaches so much importance to the iPad OS, on C as a system that was reborn in June. In order to adapt to the new features of iPad OS, the seventh generation iPad, the new entry-level iPad., has been brought in the field. The machine is upgraded to a 10.2-inch retinal display screen with nearly 105000 display pixels, while the new entry-level iPad has smart contacts that can be protected and expanded using the official keyboard fittings of a machine, iPad Pro can do most of the work. The new machine, equipped with an A10 Fusion processor and made of 100 per cent renewable aluminum for 2699 yuan, can be booked today and sold at the end of the month. 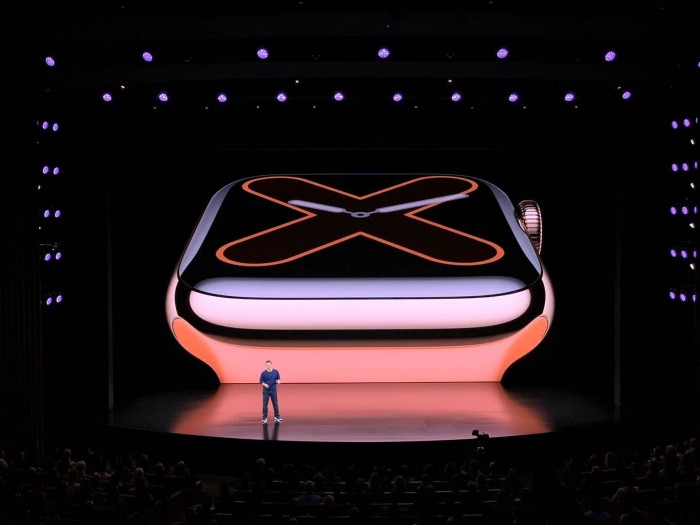 This was followed by the launch of the new Apple Watch, which focuses on health fitness and communications. At the beginning of the show, a short film was shown, inviting some users to share the changes that Apple Watch has brought to them in terms of health and fitness, which is what Apple wants the Apple Watch to do.

In terms of health function, Apple has launched three new research directions, including hearing, female physiological period, heart and mobile research, which are all collaborated with professional organizations in the United States to obtain more professional data judgment indicators. It also launched an App that allows users to share their health data and provide sample data for Apple's research.

Then the protagonist officially appeared, Apple Watch Serise 5. With a brand new display screen, it can be permanently lit. The original watch needs to be lighted by lifting the wrist. Now it can be maintained constant brightness. New watches carry the industry's first: low-temperature polysilicon oxide displays. With energy efficient drives and good energy management, it can keep the screen bright on the basis of 18 hours a day. So it's more convenient to use watches in more scenes, such as when you can't lift your wrist or exercise.

At the same time, Apple has built in more applications for watches, such as compass and emergency SOS. On Apple Watch Serise 5, every cellular network model can make an emergency international call directly. When you encounter a crisis, this function can alert you at any time in more than 130 countries.

Apple Watch Serise 5 uses 100% recycled aluminium to build the case, while introducing a new titanium model, with original and deep-air grey colors, as well as a new white ceramic case. Hermes Co-op also launched a dark-black match, in the choice of color, material than the previous generation more. 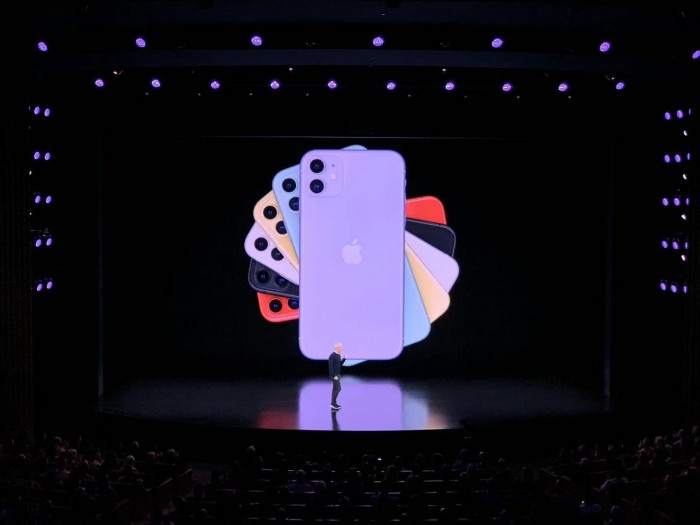 After the experience of the iPad and Apple Watch, the protagonist's new iPhone has finally arrived.

IPhone 11 follows the design of iPhone XR's anodized alumina front and rear glass, with six colors: purple, white, black, green, yellow and red. Equipped with a 6.1-inch Liquid display, with space audio technology, the sound is more immersed when watching the video. The rear uses a dual camera, has a 12 million pixel wide angle lens, and a 12 million pixel ultra wide angle camera, can achieve a wider career when shooting, and physically has twice the optical zoom.

With the new generation of Samart HDR technology and the learning of neural network, the iPhone 11 can take multiple photos at the same time, intelligently optimize the details of the picture, and use color mapping technology to bring better color and light performance. At the same time, the night mode that Android camp has already popularized is introduced. The camera can automatically recognize the shooting environment, automatically turn on the night mode at night, and increase the exposure of photos. Wide-angle lens can be shot4KVideo and theater-level shake-proof, live broadcast a pure hand-held film, the picture looks very stable.

The front-facing camera is updated to a 12 million-pixel ultra-wide-angle lens, allowing for more characters to be taken in selfies, as well as 4K, 60 frames of video and slow motion video.

The site also officially introduced the A3 bionic chip on the new iPhone, which is officially claimed to be intelligent.cellphoneThe fastest CPU and GPU ever. Giant Network was also invited to demonstrate the large-scale hand tour "Pascal Contract", which is a third-person perspective 3D game, visual impression shock, but also fully invoked the GPU performance of A13.

When it comes to battery life, iPhone 11 takes an hour longer than iPhone XR, knowing that iPhone XR is already a pretty good presence in the iPhone camp. 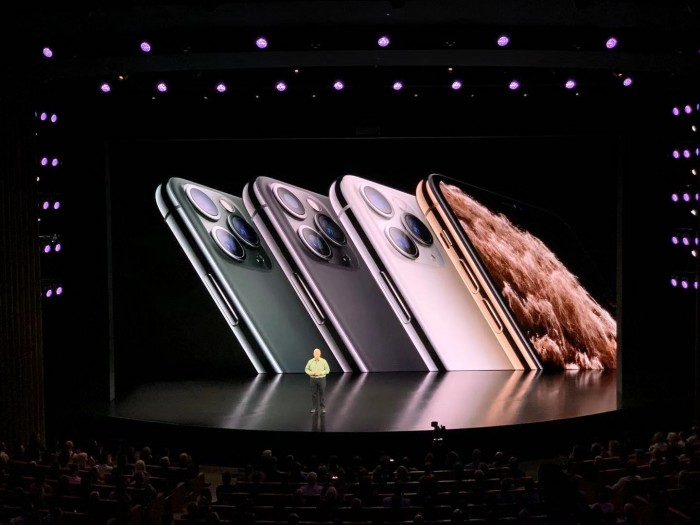 Then came the iPhone 11 Pro, which Apple emphasized was the first iPhone suffixed with Pro. Stainless steel fuselage design, with midnight green, deep air ash, silver and new gold. With 5.8-inch and 6.5-inch hyperretinal XDR displays, the brightness and contrast are improved significantly.

Batteries have long been criticized as the focus of the iPhone. The battery life of the iPhone 11 Pro is four hours longer than that of the XS. At the same time, the official 18W fast charger has been equipped to get rid of the control of Wufu Yi An.

Camera module, with a wide-angle lens, an ultra-wide-angle lens and a long focal lens, the pixels of all three lenses are 12 million pixels. Both the ultra-wide angle and the long focus lens can provide twice the zoom distance, which adds up to 4 times the optical zoom distance of the iPhone 11 Pro, and an additional long focus lens compared with the iPhone 11. Apple also stressed that with the enhancement of optics and algorithm, the three cameras can take colors and expose photos of the same performance, while the transition between the three cameras is very natural and there is no abrupt change.

In the photography algorithm, the neural network learning synthetic photo function is introduced to increase the performance of the photo. Before pressing the shutter, several short exposure pictures have been taken, and at the time of pressing the shutter, another long exposure picture has been taken, which has been synthesized through neural network learning, bringing excellent details. 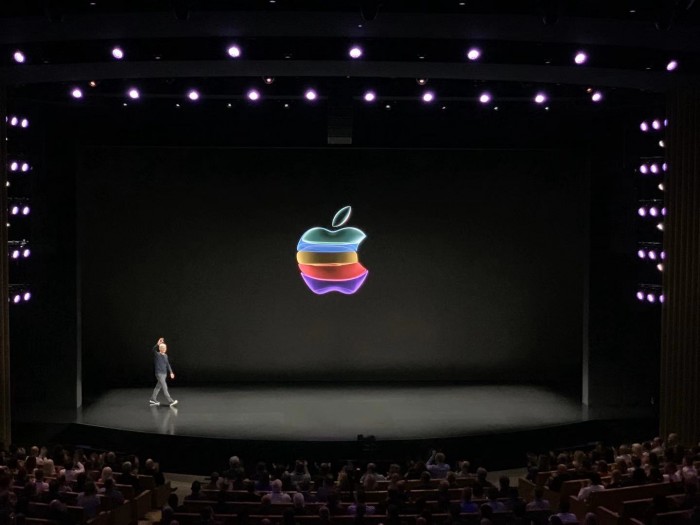 With the increasing pressure on hardware sales, Apple has gradually shifted its focus to services. If Apple originally attracted you to buy by its excellent hardware to experience Apple's services, then the Arcade and Apple TV Plus services focused on this time are more like users entering the Apple device ecosystem in order to experience exclusive content. This change of thinking can give Apple renewed vitality in the increasingly saturated mobile hardware market.

On the hardware side, even if you don't have the new features that brighten your eyes, the new iPhone has upgraded all the current features to the best in the industry. The fastest processor, the best screen, the experienced three-shot system, and the more perfect endurance time are enough to match the new iPhone with the suffix Pro.

For Chinese consumers, although Apple has slowed down a step on 5G, these three iPhones are still attractive enough this year, especially the return of product pricing, which may lead to more than expected sales performance.

Related news
Review of Apple's Autumn Release: New iPhone Hardware Pricing Up and Down Pro Suffix for the First Time
Hot news this week
Asustek 11 b460, 4 H410 motherboards: 649 yuan, 10 generations of core
Samsung global starting Intel Lakefield 5 core processor :10 nm 22nm mashups
Sony's Xperia 1 Ⅱ US version costs 8600 yuan! But only 4G network is supported
Samsung Galaxy fold waterproof case patent exposure
Huawei TSMC hired two white house lobbyists for its second largest customer
New screenshot of microsoft flight simulation focuses on Boeing 747
Combination of Wi Fi 6e and Bluetooth 5.2! Qualcomm announces the fastest wireless solution in the world
The company has just been "blocked" by the United States, and then its limit has been increased. Net friend: the U.S. Department of Commerce helps to select stocks?
Not only Huawei Kirin 710 domestic 14nm, but also the second customer: USB 3.2/pcie 3 all in one
Lenovo small new pro 13 sharp dragon version uses phase change silicone grease: CPU copying machine is stable, 35W performance is improved by 4%
The most popular news this week
Tencent AI's first show leads the new children's song of China
3 minutes to show you what might be the highlights of iPhone 12
In less than half a day, the turnover of tmall 618 has exceeded that of last year: apple, Huawei, etc. have broken through 100 million
West Fifth Street app won the 2020 China Golden fingertip "best innovative entertainment app" award
Baidu searches big data: World No Tobacco Day is more concerned about the harm of e-cigarettes
Amd sharp dragon 7 with 16GB Tianxuan to launch a new hot configuration
Analysts expect Tesla to deliver about 70000 electric vehicles in the second quarte
Apple urges iPhone users to install IOS 13.5 update as soon as possible
The cheap version Yoga Duea： Lenovo Surface Pro less than 7000
It's said that the US beat Huawei to delay the 3nm process for half a year, TSMC denied