Apple Watch 5 goes online like this: Anxiety or Strategy?

One thing to wonder about is that when, Apple Watch 5 was launched on the official website, Apple Watch 4 was removed. Why on earth is it?

The biggest highlight is on the screen.

Compared with Apple Watch 4, Apple Watch 5 has little change in appearance, and the biggest highlight is screen design.

According to official information, the, Apple Watch 5 case has two new materials, titanium case and white precision ceramic case. The screen uses the LTPO screen, does the permanent bright display, raises the wrist or touches the case is the normal brightness, the other time will reduce the brightness display. The new low-power driver, ultra-efficient power management combined with the new ambient light sensor, allows the watch to still have power from early to late 18 hours while the display screen continues. 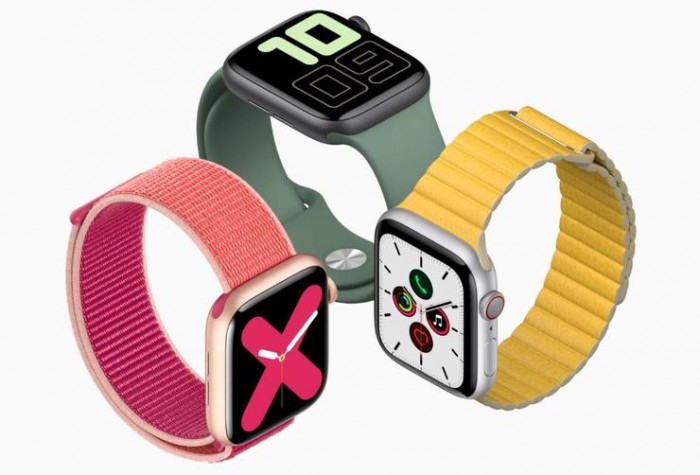 In terms of health monitoring capacity,AppleContinue to emphasize that the core function of Apple Watch series is health monitoring, critical moment can save lives. Apple has also teamed up with the World Health Organization, the University of Michigan and the National Institutes of Health to do professional research on hearing and women's health. In addition, it can support SOS emergency calls in more than 150 countries and call for help when danger is detected.

In terms of chip updates, each new Apple Watch comes with a new system chip (SoC), to provide faster performance and better battery life. Although not mentioned at the launch early this morning, the new Apple Watch 5 did use a new Apple S5 chip: a 64-bit dual-core processor that brings powerful running speed and sensor processing power, twice as fast as the S3 processor, according to people familiar with the matter. In addition, a small detail has been added, with a built-in compass.

An endless stream of new products

In August, Samsung released its latest smartwatch, the Galaxy Watch Active 2, with a minimalist design that suits different scenes such as business and leisure.

In the dial part, Samsung Galaxy Watch Active2 achieves the maximization of screen size through ingenious digital design, which further improves Super AM.The browsing convenience of the display screen. At the same time, users can easily select common applications by rotating the dial clockwise and counterclockwise. In addition, the upgraded One UI interface is more concise and clear, allowing users to have a more intuitive and natural operating experience.

In addition to the improvement of function and material, Samsung Galaxy Watch Active2 has brought a variety of choices for the pursuit of personality and fashion wristwatch style. it not only has interesting dynamic dial design, but also can download more dial through Galaxy Wearable software, so that users can match their own style according to different shapes every day.

As an excellent smartwatch, Samsung Galaxy Watch Active2 can handle both dial design and professional improvements.

The, Fitbit Versa 2 uses faster processors than the previous generation, while the AMOLED screen has been expanded to bring clearer color and visibility to consumers. At the same time, the anodized alumina watch frame used in Versa 2 is exquisite and modern, waterproof up to 50 meters, which can fully meet the needs of ordinary consumers.

Fitbit Versa 2 carries the latest sleep features to help consumers better understand their sleep. In addition, there are all-weather heart rate monitoring, more than 15 goal-based exercise patterns to help consumers stay healthy. It went on sale on September 15 at a price of $200.

In addition, the, Fitbit Versa 2 uses a Alexa,AMOLED display and has a five-day battery life. Versa 2 has a concise design, a new sleep feature and a Spotify application for paying users. Spotify allows you to control playback, change playlists, such as songs, and switch music output anytime and anywhere. Versa 2 can also store and play more than 300 songs from a personal music library and download Pandora Radio. And add Deezer playlists.

And recently,Huawei While introducing Harmony OS (Hong Meng System) at a media event in London, UK, a new smart watch was announced to be launched in overseas markets.According to foreign media, the smartwatch carrying Hongmeng OS will soon be available to consumers, the Watch GT2 smartwatch, released with Huawei's Mate30 series on Sept. 19. Huawei Watch GT2 will no longer carry Android Wear, but Hongmeng OS.

In addition, Watch GT2 will be equipped with a circular OLED screen with a narrower frame, a dual physical crown, a significantly reduced thickness, a slight increase in battery capacity, and an integrated heart rate monitoring sensor.

According to the Global Smart Watch Market Share Report released last month by Strategy Analytics, a market research company, global smart watch shipments in the second quarter were 12.3 million, up 44% year-on-year, while Apple accounted for nearly half of the market share, far ahead of other smart watch manufacturers, riding in the market. No dust. 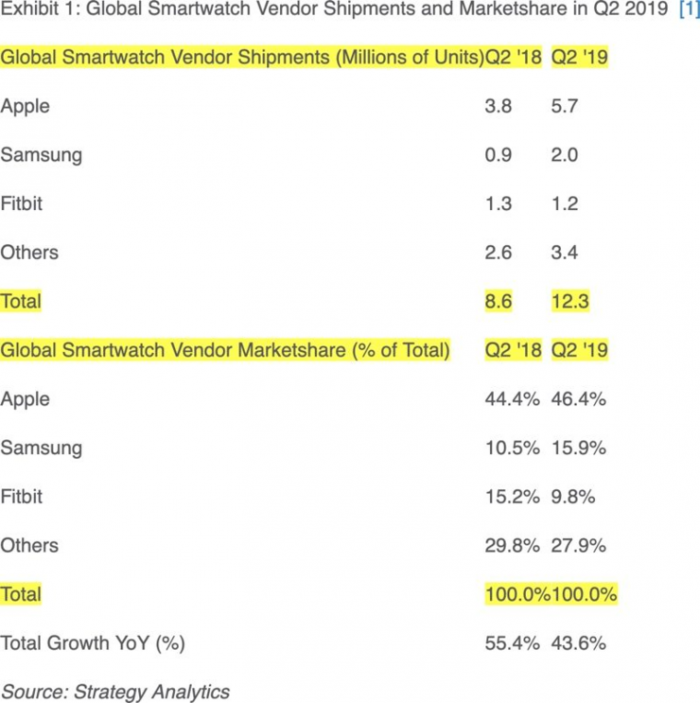 However, this definitely does not mean that Apple can rest assured.

Fitbit, a foreign wearable device maker, is not as well known as Apple Watch and Samsung in smartwatch, but his performance on smartwatch is equally impressive, and the release of Fitbit Versa 2 is also worth noting. In addition, Huawei, Huami and so on have also stepped in, whether in the product performance upgrade, or in the technical innovation have changed greatly, played out their own style.

With the release of Samsung Galaxy Watch Active2, Fitbit Versa 2, Huawei Watch GT 2 and Huami Amazfit smart sports watches, it is hard to say that the players of these smart watches will not have a big jump in market share as Samsung did in the second quarter.

Apple's Apple Watch 5, on the whole, is not much better than the previous generation.

According to industry sources, Apple is likely to take into account the Apple Watch 4 and Apple Watch 5 in terms of product upgrades, the overall bright spot is not enough, only the screen part is worth mentioning, if rashly to the former price reduction sales are likely to have a negative impact on the market sales of new products, so decisively removed the Apple Watch 4.

Is this an anxiety that Apple is constantly challenged by endless new products, or a defensive strategy that Apple Watch 5 is fighting in the market?

Related news
Strategy Analytics: Global shipments of 5G smartphones will reach 5 million this year
Strategy Analytics: Assuming the ban continues, Huawei's global mobile phone shipments will fall 24% year-on-year.
Apple Watch 5 hardware will not significantly upgrade new features to lead the way forward
Apple Watch 5 goes online like this: Anxiety or Strategy?
Apple Watch sold more than the Swiss watch industry last year How Swiss watches have developed
Global smartphone shipments fell 17% in the first quarter of Strategy Analytics：2020
Strategy Analytics: Global smartphone shipments fell 17% in the first quarter of 2020
Data in the first quarter of 2020: Apple watch strengthens its market advantage in the smart watch market
What has Apple watch changed me?
Hot news this week
Too many questions! Apple has changed the timing of the official release of iOS 16 series
Monkey acne cases have ranked first in the world that the United States has announced the emergency state of public health
Tencent and Logitech cooperation of the cloud game console Revelations: equipped with Android system configuration is low
Credit card points rule intensive adjustment online transaction points more "valuable"
High reserves and low cost experts: calcium ion batteries replace lithium batteries to stand up to the daily
Alibaba executives interpret financial results: the focus of the consumer side is no longer to attract new, but to do a good job in stratified operation
Losses in a single quarter of $ 23.4 billion a record, SoftBank did not carry the plunge of technology stocks and the devaluation of the yen
Sources say Samsung's Galaxy Z Fold4 is going up in price: a 512GB top unit will cost more than 13,000
The prevention and control of the American Monkey epidemic has failed. What should I pay attention to?
Is the micro -business headache? WeChat friends are suspected to have a big move: 7 can only be posted a week
The most popular news this week
After selling Tesla for $6.9 billion, Musk said he was not selling it, but a survey said he was still selling it. The title of the world's richest man may not be guaranteed next ye...
Distributed database OceanBase announced 4.0 product release, single -machine deployment performance is super mysql
The three major indexes of the US stocks opened sharply: ROBLOX fell more than 4%, Twitter and Tesla rose more than 3%
Japan has confirmed that China has overtaken the US for the first time in the world's top three indicators of scientific papers
A wake-up call for Apple? Foxconn says it is feeling the sting of slowing demand for smartphones
Joining Chip Alliance could serve as bridge, says South Korean Foreign Minister
Joe Biden also mentioned Chiplet? An unexpected A-share buzzword in A White House briefing
Nio Li Bin responds to mobile business rumors: This should be the definition of other people's imagination to us
Amazon is pushing a feature called "swipe to pay" that scans your palm to pay in seconds
Text message color, picture quality compression! Google calls out Apple for improving cross-device messaging