Nearly 3/4 of Oracle's revenue comes from cloud computing services and licensing support, and the company is trying to break into the competitive cloud computing market.

On the day of the release of the results, Oracle also announced that Hurd would be on leave for health reasons. Hurd joined Oracle as president in 2010, after he worked inHewlett-Packard 公司总部所在地：美国 主要业务：计算机 The company has been chief executive for five years. 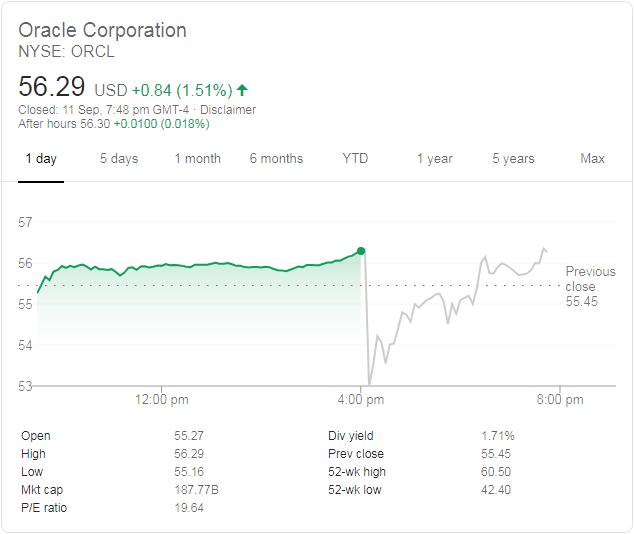 Oracle did not specify Hurd's health problems, nor how long he would be away, nor did a spokesman for Oracle respond immediately to requests for comment.

In a regulatory filing Wednesday, Oracle said Hurd would continue to enjoy company benefits during his vacation, earning a total salary of $108.3 million in fiscal year 2018, mostly from options awards.

Oracle shares fell about 5 percent after the announcement on Wednesday, but the stock has risen about 25 percent so far this year.

Related news
Oracle Linux 8.0 release
Is the Ali database really better than Oracle?
Amazon completely removes Oracle Database: migration completed
Thinking behind AWS abandoning Oracle
The death of commercial database: Oracle facing difficulties
Hot news this week
Qualcomm lobbied the US government to lift the ban on the sale of components to China
Tencent re racing e-commerce, but does not want to make the next pinduoduo
Wechat in Apple's Google App store may be banned. What if wechat can't be used on iPhone
Tencent's response to wechat ban issued by the United States: under evaluation
Foreign media revealed White House documents: the ban may make apple and Google "off the shelves" tiktok
Xiaomi 10 supreme commemorative edition press conference Lei Jun's live rehearsal
After the sesame seed, Alipay's "financial points" is officially launched: let's see how much you have.
The United States blocked tiktok and wechat one after another: This is the real purpose!
Tencent launched the largest school recruitment in history, and these positions are most popular
Votebymail is dedicated to helping American voters easily apply for postal ballots
The most popular news this week
Understanding Xiaomi's AB side in ten years with 12000 words
Huawei surpasses apple to win the first place
Samsung Galaxy Tab S7|S7 the launch of a new generation of flagship tablets
Samsung launches Galaxy budds live Bluetooth noise reduction headset: from 1199 yuan
Blood oxygen electrocardiogram monitoring Samsung announced Galaxy Watch 3 price of 2999 yuan
Samsung releases Galaxy Note 20 series of mobile phones :12 512GB emperor's edition 9999 yuan
Blue light not only hurts the eyes: it can also increase the risk of depression
Is it feasible for Huawei's "Tashan plan" to beautify 45 / 28nm production line?
Huawei is just 30
Net profit of Netease in the second quarter was 5.2 billion yuan, up 33.3% year on year