Huawei is not short of money to issue bonds, but to tell you how rich I am. 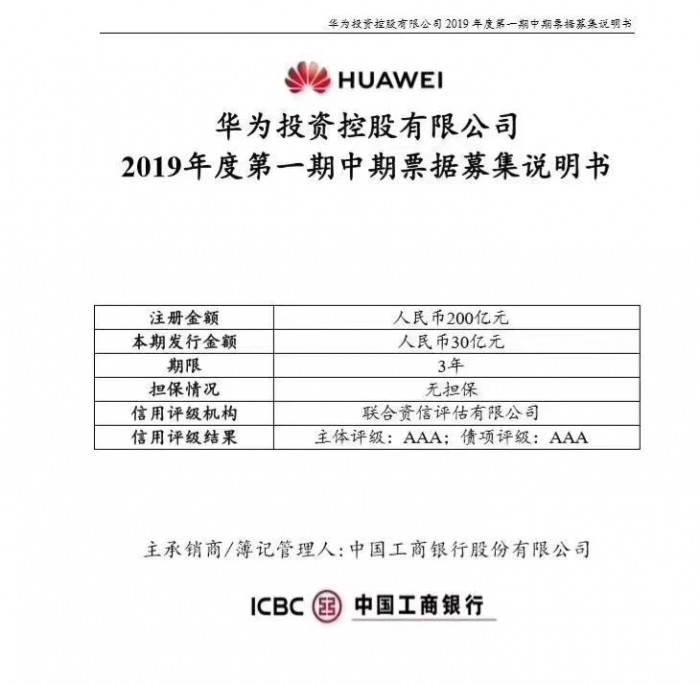 The release of this information stirred waves among the major trading institutions. A senior bond market practitioner told reporters that after reading the bond issuance brochure, the company basically did not understand the technical aspects, but the financial situation is good. Such private enterprises can be said to be one in a million.Huawei It itself represents a kind of strength.

According to the prospectus, Huawei issued four U.S. dollar bonds overseas in 2015, 2016 and 2017, totaling $4.5 billion, which were not due; there were two single dim sum bonds, totaling RMB 2.6 billion, which had been paid off. Huawei has not had any experience of issuing bonds in China before, so the issuance of the winning ticket will be its first show in the domestic bond market.

The prospectus also indicates that the purpose of the two instalments is to supplement the working capital of the company's headquarters and subsidiaries, mainly due to the fact that "the company's various businesses are expected to maintain a steady growth trend in the future and the financial support will be further increased ". In addition, ICBC and CCB are the lead underwriters of the two installments, and the maturity of the bonds is three years. 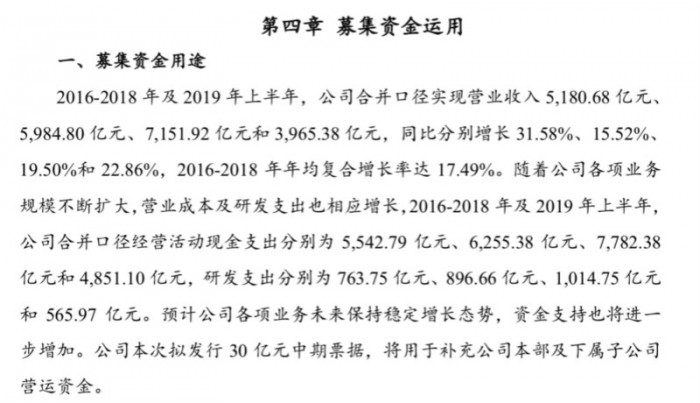 It is worth noting that Huawei's unknown financial situation has also been unveiled in the announcement of the winning ticket.

In addition, among the current assets, monetary funds reached 249.731 billion yuan at the end of June 2019, an increase of 65.644 billion yuan, or 35.66 percent, compared with the end of 2018. In terms of book funds alone, Huawei is not short of money. With regard to the growth of monetary funds, Huawei said, "mainly because the company is based on liquidity management needs, the monetary funds held as the size of the business increases to ensure business demand."

As for the subscription of the winning ticket, the bond veteran said, "it is estimated that the bank will take the big head, most of the non-silver is to watch a lively, after all, when making a buyback, it is not necessarily possible to bet on it."

Joint Credit Assessment Co., Ltd. gives AAA ratings to both the main body of the bond and the debt. Joint Credit said that in recent years, Huawei's core operators have been operating steadily, consumers and businesses have expanded rapidly, and have strong overall profitability, cash acquisition and Reinvestment capabilities; assets and equity scale has continued to grow, cash assets are abundant, and debt burden is relatively light.

Joint Credit also mentioned some of the operational risks the company may face.

But on the whole, "the risk of debt service of the main body of the company is very low, the repayment ability of the current medium-term note is very strong, and the risk of default is very low." That's what the joint credit rating says.

Related news
The new HUAWEI MateBook E is coming with the support of Luan 850 platform.
The new HUAWEI MateBook E evaluation: light office era self-help green paper
Hot news this week
Wechat has not done this function for N years! Use this app to make up for the defects of wechat
Gree's response to "being disqualified from winning the bid": a mistake made by the bidder in sorting out the materials
Apple wants to know: what do you do with the charging head of the old iPhone?
IPhone 12: it's more like throwing away the charger
ASUS main board leads Rog day fans Carnival highlights
Luo Yonghao comments on ideal one: Tesla Model 3 is not a car of a level at all
A 400-brand evacuation Facebook： the internet giant strangled?
The dotcom bubble? U.S. technology stocks surpassed their 2000 highs relative to the S & P 500
Tesla's warranty service suddenly shrinks: touch screen and media control unit halved to two years
Samsung and research team found a new semiconductor material: amorphous boron nitride (a-bn)
The most popular news this week
NVIDIA 451.67 video card driver release: fixing 23 bugs, saving 144hz HDMI display
Epic plus three: free 3 games and torch light 2 next week
How difficult is it for Tesla Model 3 owners to protect their rights when they speed up to crash into the muck and FSD is suspected to be reduced?
Tian Suning talks to Intel's former CTO: where is 5g's "killer app"?
Trojan program with the help of game download station again spread cloud control malicious module
China's first Ku band high-throughput broadband commercial communication satellite "Asia Pacific 6D" launched successfully
European Supreme Court: YouTube does not need to submit user information for publishing pirated films
NVIDIA surpasses Intel for the first time! A victory for fabless and AI
Duty free iPhones are delicious, but you should also pay attention to these "holes"
Google launches open usage commons IBM has objection to trademark transfer