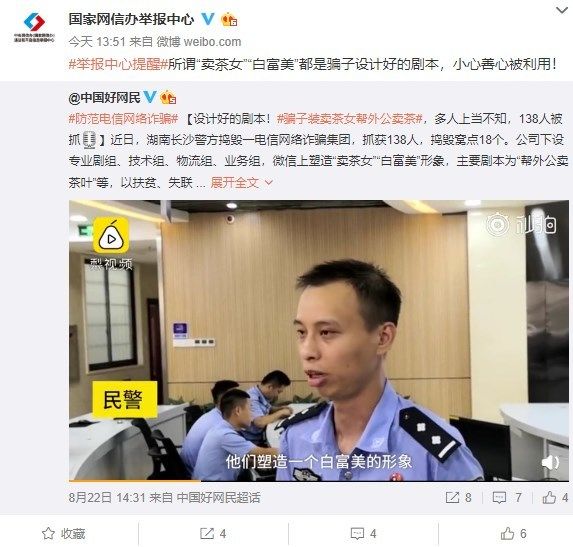 Previously, there have been "beautiful women" cheaters in the name of "supporting education" in several parts of the country, which makes people defensible. After being exposed, this routine has been upgraded in recent years.

Reporters in Zhengzhou Shangjie District Procuratorate learned that one day in March, the number of migrant workers working at a construction site in Shangjie District was less than that, and their Wechat was added by a friend named Xiaofang. Xiao Fang said that she had just broken up with her boyfriend when she was teaching in the mountains, which was less sympathetic than comforting Xiao Fang. 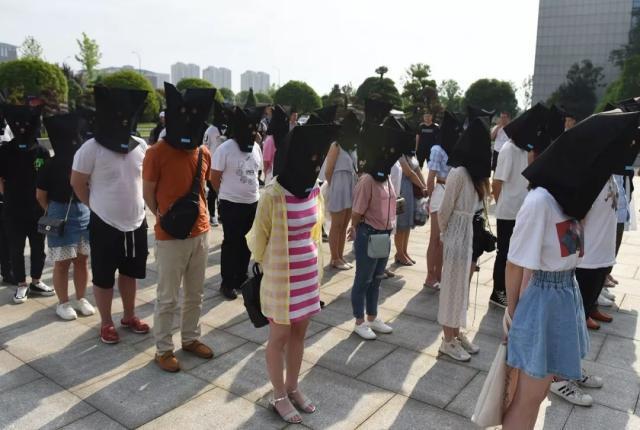 _Changsha County police removed the tea-selling women's nest in Wuhan, and many of the people involved were taken away. Map for Changsha County Public Security Bureau 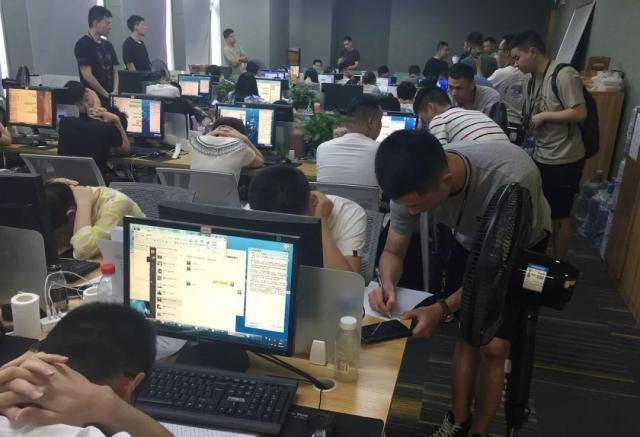 In the process of Wechat conversation, Xiao Fang felt gentle and kind, especially after seeing the pictures of her friends'circle supporting the church, she was deeply moved. During the next period of time, they had a very happy conversation, and their feelings quickly warmed up, less than feeling that he had met true love. Therefore, when the "support girls" put forward the needs of granny's birthday red envelope and buying gifts for her birthday, they issued red envelopes successively, ranging from 10 yuan, 20 yuan, 30 yuan to 520 yuan and 1314 yuan, less than the slightest doubt.

Next came the big show. Xiaofang said that her biological mother died and left a tea house for herself before she died. Now she is competing with her stepmother for the right to operate the tea house on the condition that the turnover within a month must reach 50,000 yuan, otherwise her stepmother will sell the tea house. Xiao Fang also showed Xiao Xiao a tripartite agreement on Wechat.

In order to help him, he also purchased 1000 yuan of tea from Xiaofang, and later did receive tea. A few days later, when Xiaofang put forward that the turnover was still 10,000 yuan short, he helped him less than he thought.

"The end of the story can be imagined, less than the transfer, Xiaofang quickly pulled it black. Only one month, less than the price of 134,000 yuan, and finally wake up. Zhao Shasha, procurator of Shangjie District Procuratorate of Zhengzhou City, revealed that Xiaofang was actually a gang, which in less than half a year cheated "good-hearted people" for nearly 300,000 yuan. At present, nine suspects in the case have been arrested by the Shangjie Procuratorate in accordance with the law.

Reporters learned that, in fact, the so-called support girls and tea sellers are all characters carefully designed by fraudulent gangs. According to Zhao Shasha, in the aforementioned cases, Momou and other three suspects in the case set up a special studio. First of all, they went undercover to "peer" company and got a script called "Fourteen Days Friends Circle", which is actually a fraud script. These scripts are carefully designed according to the process of interpersonal communication and trust cultivation. According to the plot of the script, the suspects step by step build trust with the victims, win sympathy and commit fraud. According to the Speechbook, it only takes about 14 days for the suspect to contact the "target customer" and finally commit fraud.

"The fraudulent group purchased the Weixin account with a large number of Weixin friends, hired beautiful models to take a lot of photos of life and work, hired a group of'salesmen'to use a number of social application software to push Weixin, add Weixin friends everywhere, and then chat with customers according to the'verbal' routine to develop'target customers'. ” Zhao Shasha introduced that this is the so-called wide-ranging Net-casting focused fishing, once the "potential target" of insufficient social experience is found, they frequently ask for money to satisfy their selfish desires, cheating one is one.

In fact, many of these "salesmen" are men. They first disguise themselves as beautiful girls, such as beautiful teachers, kindergarten teachers, and so on. They also create pure and lovely, positive and filial parents. According to the rhetoric, they chat with "customers" to cultivate feelings, and distribute the field of daily work and life of the circle of friends. Then, he cried that he had been abandoned mercilessly by his boyfriend, so as to win sympathy; then he tried to win the victim's sympathy and trust by pretending to be sick and having a birthday, and demanded red envelope; finally, he made up his own mother's death and competed with his stepmother for the right to operate the tea plantation, provided that he reached one within the deadline. Fixed turnover, otherwise the stepmother would sell the teahouse, falsely claimed that the turnover was thousands of yuan short, and pleaded with "customers" to buy to help them achieve their wishes.

"This kind of fraud based on emotion, through tea as a barter, proceeds step by step, adopts the way of layers of transition, slowly advancing, and the victim is difficult to realize that he has been cheated for a long time." Zhao Shasha said.

"Through the analysis of the telecommunications fraud cases recently investigated and dealt with, the main methods of fraud are network billing,'guess who I am'and impersonating the staff of public prosecution law organs. Zhao Shasha said that although the deceiver's routine is outdated, the deceived are still "successive".

In order to let more people know the "routine" of cheaters, recently, the procuratorate of Shangjie District of Zhengzhou City launched a law popularization campaign in Fenggou Village, Xiawo Town, Zhengzhou City. Zhao Shasha explained in detail the types, routines and ways of identifying fraud crimes to the villagers based on the above practical cases.

Reporters in the interview learned that, unlike everyone's imagination, on weekdays everybody fears that the elderly will be fraudulent by telecommunications, in fact, young people are the high-risk group. It is reported that in recent years, according to the cases investigated and dealt with, it is not the elderly who are the most fooled, but the young people in their twenties and thirties, followed by the middle-aged. In Zhao Shasha's opinion, the main reason for this situation is that young people use the Internet more frequently on weekdays and have more opportunities to encounter routines than the elderly.

"Compared with the one-to-one mode of traditional fraud crime, network fraud makes full use of the anonymity, cross-regional and real-time characteristics of the network itself, making it more deceptive and concealed. The huge economic losses, the wide range of victims and the great social harm it causes far exceed the traditional fraud crime. ” Zhao Shasha introduced that in the first half of this year alone, the procuratorial organs of Shangjie District handled many cases of telecommunication network fraud, involving tens of millions of dollars in funds and more than 50 people.

So, how to distinguish emotional fraud and how to prevent it in online social networking? In Zhao Shasha's opinion, first of all, we should cultivate awareness of fraud prevention, be alert to economic contacts and not transfer money to strangers; secondly, we should protect personal privacy and not easily disclose information about our own property status; at the same time, we should maintain correct investment and financial management psychology, avoid high-risk and unrealistic impulsive behavior; and, we should be vigilant. Beware of unknown two-dimensional codes, links, Apps sent by the other party, not easy to click, not easy to scan code, to avoid property losses.

"In addition, I think strangers'applications for Wechat friends should be rejected all the time." Zhao Shasha said that young people should also care more about their elders and convey their knowledge of safety and precaution to them in a timely manner. In addition, we should pay more attention to the elders'online payment, ensure property security and stop loss in time.