Google employees complain that TypeScript: type checking is not good

Recently, the Google employee named Evan Martin published a report on TypeScript in the GitHub repo of TypeScript. 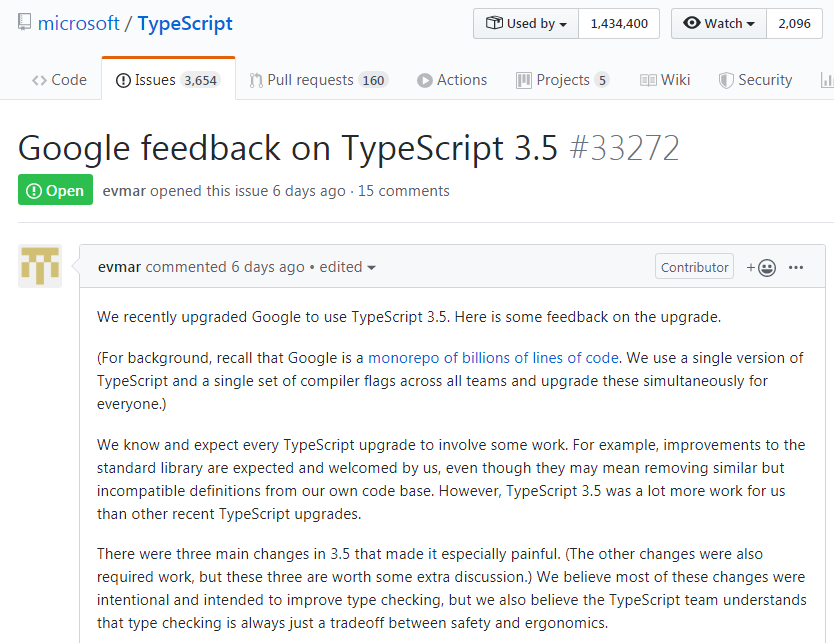 thoughTypeScript 3.5 releaseIt has been three months (the latest stable version 3.6 was released at the end of last month), but the Google development team has only recently upgraded to version 3.5. After a period of use, developers feel that they do not vomit, so there is a high quality feedback on the use of this article. Yes, the project mentioned here is the Google that is used by people.

The project facing the development team is Google, which has billions of lines of code. Within the team, all members use the same version of TypeScript and the same set of compiler flags across all platforms. If upgraded, members will help upgrade these flags for all at the same time.

Evan said that he, like everyone else, would expect some improvements from the new version of TypeScript. For example, Evan said he wanted and welcomed improvements to standard libraries, even if that might mean removing similar but incompatible definitions from code libraries. However, the team found that the upgrade to TypeScript 3.5 resulted in much more additional work than previous upgrades.

To this end, Evan hopes that this large code base-based TypeScript will use feedback to help the TypeScript team better assess similar situations in the future and provide some suggestions.

Let's look at three major changes that Evan says will affect the team in Version 3.5.

This feature is a devastating change in version 3.5, and Evan believes that the reason for the problem here is that the generics of the code are not relevant to what the code does. For example, suppose there is some code with Promise parsing, but it doesn't care about the value that Promise parses:

Because generics are unbound, in 3.4In 3.5, the code becomes。 If the user of this function writes this type of Promise anywhere:

This will result in type errors.

in addition, there is also a method known as that

But in the end, it was not feasible.

The two may look very similar. But imagine a function that accepts a predicate and returns an array filter and uses it as the code above:

In version 3.4, by definition,TfromAnyTurn intoMyFilterAnd become a byAny[]reachAny[]Function. But in version 3.5,TOnly generics are retained.

In TypeScript 3.4, the following code:

Will return one。 However, a change has occurred in TypeScript 3.5 to enableLib. es2015. iterable. D. TSWith removalAnyThe effect then causes the generic to change the description above and deduce the type asUnknown。

This change is ultimately difficult to fix, because the final type error sometimes falls far short of the actual problem. For example, in the following code:

We will receive the information about it.Array.fromType error prompts, but what actually needs to be fixed isNew Set ()。

Evan said they were very satisfied with TypeScript, and the feedback was only intended to provide some reference for the team in designing new features to better develop TypeScript.