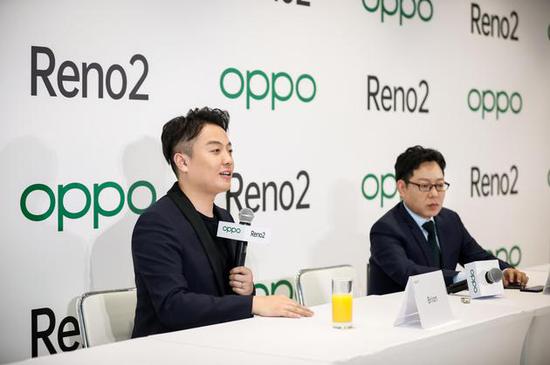 Shen Yiren, vice president of OPPO and President of global marketing, said that Reno 2's main video shooting and video clipping application Soloop were also in preparation for the outbreak of video scenes in the 5G era.

Earlier, OPPO had announced that it would launch 5G mobile phones in China in the third quarter of this year. Reno 2 did not start 5G this time, which means OPPO's 5G strategy has been adjusted.

Wu Qiang said in an interview that OPPO must be able to market 5G commercial products, Reno 2 does not support 5G is not a matter of ability, but the choice of time point. The establishment of 5G ecology needs the whole industrial chain, upstream and downstream to construct the network ecology together.

"We can also officially commercial 5G products at any time in China." Wu Qiang said, but it is more important to choose the right time to cut in. On the one hand, OPPO can experience the Reno 5G version at any time in more than 100 experience stores across the country, and OPPO will also launch Qualcomm's dual-mode 5G scheme this year.

Wu Qiang also predicted that in 2020, nearly 20% of China's market opportunities will be 5G products, and all flagship models will basically be launched 5G. But in the long run, the coexistence of 4G mobile phones and 5G mobile phones will continue for some time.

Shen Yiren emphasized that although Reno 2 did not support 5G, OPPO was already exploring 5G applications. In his view, with the promotion of 5G network and the increase of traffic, video will be the scene that consumers can feel most directly. Viewing, producing and sharing videos will become the first key threshold for 5G applications, and Reno 2 will explore and develop in this area first.

In addition to preparing for the 5G outbreak, Shen Yiren also revealed that OPPO has launched 6G related technology research and development and reserves.

Behind the Adjustment of Architecture: Adapting to the Operation of Globalization

Shen Yiren said that at present OPPO products have been sold to more than 40 countries and regions worldwide, accounting for more than 40% of overseas sales. OPPO has been globalized objectively, but selling products globally does not represent a globalized company. "We have changed from two networks of domestic and overseas markets to two-tier networks of global marketing and sales."

Wu Qiang further said that in the past, for historical reasons, OPPO was the first market to develop in China and the overseas market to move forward step by step. In the past, OPPO focused more on the development of China, Southeast Asia, India and other markets. Since it entered the Western European market last year, it means that the development of OPPO has formally entered the global market.

"The next two to three years, three to five years is a very important turning point for OPPO." Wu Qiang said. The operation of globalization has put forward higher challenges and requirements for OPPO itself. OPPO is developing towards globalization in terms of products, planning, operation, brand communication, promotion, construction and talent.

In fact, OPPO upgraded the R series to Reno series as an example. From Reno, Reno 5G version to Reno Z, then Reno 2, and Reno Ace, which will be released in October, OPPO is constantly combing its product line to build a globally unified product line and brand image.

Wu Qiang emphasized that the maturity of OPPO in local brands varies with different stages of market development. Therefore, OPPO will not adopt a one-size-fits-all strategy in promoting global markets, but will adopt the most practical local way according to the characteristics of each market. "The idea of internationalization of landing brand and localization of operation is our way of thinking." A very important strategy for the next few years.

For example, in China and Southeast Asian markets, OPPO used to be more of a thinking and operation mode of 2C. But after entering the European market, it needs to focus on operators, change the operation mode, build 2B capabilities for operators, and change a series of links such as product development, production and manufacturing. He revealed that OPPO has entered 10 European countries and has cooperated with 13 operators, and will continue to strengthen cooperation with operators in the future.

In addition to globalization, promoting the upgrading of channels and brands is another focus of OPPO in recent two years.

Prior to this, OPPO has opened three super flagship stores in Shanghai, Shenzhen and Beijing to upgrade the offline channel system. Wu Qiang said that on the one hand, OPPO will complete the layout of super flagship stores by the end of this year. On the other hand, due to the impact of the Chinese market environment and changes in business format, OPPO has been actively shutting down some remote and small stores to optimize the channel structure.

In addition, the form of offline stores in the mobile phone industry is also evolving into Shopping Mall-style integrated stores. Wu Qiang disclosed that OPPO has now stationed 400 Shopping Malls in the Chinese market, which will exceed 600 by the end of this year and 1,400 by the end of next year.

OPPO has maintained restraint in the IoT category, with the first two categories of smart headphones and smart watches defined.

As for smart watches, Wu Qiang said that OPPO will focus on areas related to human health, in addition to exercise, cardiovascular and diabetic health.

Shen Yiren further revealed that the development of OPPO's smart watch has been advancing for some time, and the products related to sports health may be displayed at next year's Bazaar. He also said that in addition to focusing on mobile phones, smart headphones and smart watches, the future does not exclude more areas.