Is Huawei short of money?

The 21st century economic reporter inquired and learned that Huawei issued two interim bills with a total amount of 3 billion yuan and a total of 6 billion yuan, with a period of three years. The total registered amount of the two phases is 30 billion yuan, of which the main underwriter of the first phase is Industrial and Commercial Bank of China and the second phase is underwritten by China Construction Bank. Rating agencies also give AAA long-term credit rating and debt rating.

To put it simply, Huawei has to raise money by issuing bonds. This important move is not only a new layout of Huawei's financing channels, but also a better understanding of Huawei's corporate structure, ownership structure, capital position and so on.

Huawei also responded to the 21st century economic reporter that the capital needed for Huawei's operation mainly comes from the accumulation of enterprises'own operation and external financing, mainly from the accumulation of enterprises' own operation (about 90% in the past five years), and supplemented by external financing (about 10% in the past five years). The company operates steadily and has ample cash flow.

As Huawei does not and does not intend to go public, the outside world has always been curious about Huawei. Although Huawei regularly publishes financial statements and gives detailed introductions to the company every year, more details are disclosed in the offering manual and Huawei's posture is more open.

So, what information did Huawei reveal, what are the reasons behind its debt issuance, and what are the future layouts? Let's take a look at the data.

1, Huawei financing, how to use the money?

First of all, where is the financing going?

Huawei said the funds received from the bond issue would be used to continue to focus on ICT infrastructure. According to the statement of the offering statement, the medium-term note will be used to supplement the working capital of the company's headquarters and subsidiaries.

It can be seen that management, R&D and so on need a large amount of funds, followed by the 5G construction, artificial intelligence research, are required to inject funds.

Take a look at Huawei's main projects under construction and proposed projects.

There are five major projects under construction, namely, the Guian Huafei Cloud data Center project (with a total investment of about 7.9 billion yuan, which is expected to be completed in 2021).

There are two projects to be built, Haiqingpu R&D project and Wuhan Haisi factory project, with a total investment of 12.785 billion yuan.

Second, is there a shortage of money?

So is Huawei issuing bonds because of tight capital? According to the disclosed financial data, Huawei is not short of money. The two words disclosed by the data are: rich. 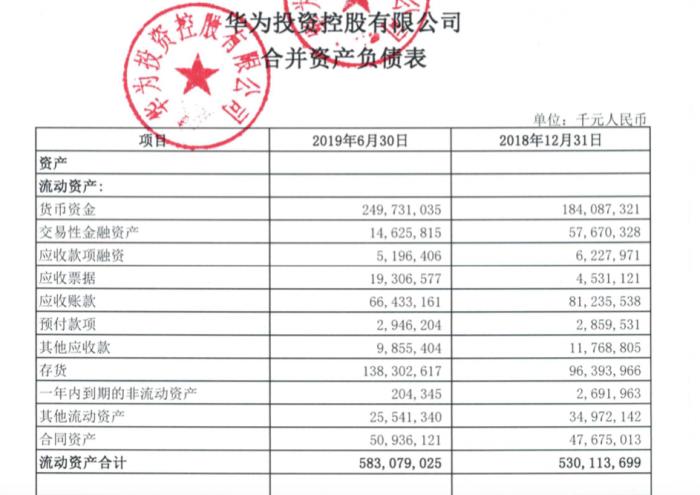 At the same time, some insiders pointed out that short-term cash flow is still some pressure.

Fang Jing, an analyst at China Merchants Securities, told the 21st Century Economic report: "Huawei's financial position is very good. In the first half of 2019, the company's balance sheet, currency, capital, book balance was 249.731 billion yuan, trading financial assets reached 14.626 billion, and there was plenty of money on the account. However, as the company increases its R & D investment so far this year, it is ready to actively prepare the goods in advance to deal with the impact of US trade sanctions. Therefore, the net operating cash flow reported in 2019 is only 5.448 billion yuan, which is quite different from the net profit of 34.904 billion yuan in the first half of the year. It is also understandable to issue bonds to supplement the cash flow at this time. On the one hand to ensure that they have sufficient funds, on the other hand to ensure the smooth operation of their business. The next delivery can be guaranteed to the greatest extent possible. " 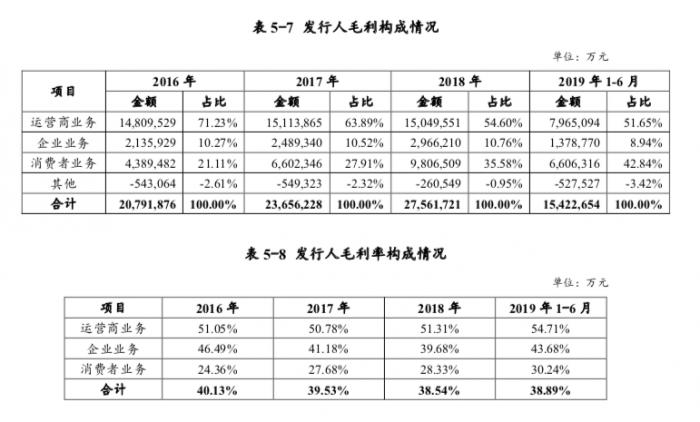 The operating profit margins were 8.81%, 9.52% and 10.47%, and the net profit margins were 7.15%, 7.93% and 8.30%, respectively. Mainly due to the rapid growth of revenue scale, the proportion of high-end intelligent terminal sales of consumers has increased, and the operational efficiency brought about by continuous change has been improved.

Current consumer business, includingcellphoneFor the first time in 2018, smart terminals such as Huawei became the dominant force, exceeding 50% of the total revenue. However, from the figure below, in terms of gross profit, the operator business is still the main force, but the proportion is decreasing year by year, while the gross profit of consumer business is increasing.

In the first half of 2019, the gross profit of consumer business was 66.063 billion yuan, accounting for 42.84%. The terminal Legion is gradually becoming the pillar and the growth point in the future.

This is also the first time Huawei has disclosed the gross profit and gross profit margins of the three major lines of business.

If the gross margin of consumer business andmillet ,AppleBy contrast, the gross profit margin for Q2 millet was 14 percent in 2019, while Apple was above 35 percent. It can be inferred that Huawei's mobile phone gross margin is in the first tier and continues to grow to the high end of the market.

Overall, Huawei's business is very healthy. Fang Jing also said: "We believe that this issuance of bonds is Huawei's first contact with the domestic capital market. First, China's domestic bond market has developed rapidly. At present, the market capacity is the second largest in the world. Bond financing has become an important financing channel in China. Second, Huawei is at the core of the ongoing trade frictions between China and the United States. Huawei takes precautions to enrich financing channels through domestic debt issuance, optimize the overall financing layout, and supplement cash flow to deal with future uncertainties.

In addition, can not be ignored, through debt issuance, but also can show the results of the company, play a muscle role. Huawei is still doing well under pressure, with inventories up 41.9 billion in the first half of the year from the end of last year, partly defusing concerns about Huawei's total stock, and Huawei is proving itself through comprehensive strength. "

3. Just show your muscles? Why issuing debts in China at this time?

The two issues of 6 billion bonds are just drizzle for Huawei, which holds a lot of cash. So, yesterday, everyone was asking, is Huawei pure muscle?

Of course, it's not just about showing strength. Firstly, for enterprises, they don't need financing until they have no money. Huawei has always prepared for Plan B. Today, a company is facing a blow from a country in the United States. In the long run, Huawei also needs to build high walls, accumulate large quantities of grain and open up more financing channels.

Huawei needs to maintain high growth every year to ensure high salaries and welfare of its employees, which is also the core element of Huawei's talent attraction. Through bonds, we can make some cash flow supplements, support R&D investment, and prepare for the next step. Naturally, there are many benefits.

It is also common for wealthy companies to issue bonds, such as Apple's plan to issue $7 billion in bonds in early September. It is understood that after issuing $5 billion in bonds in 2017, Apple recently announced that it would issue five batches of senior unsecured bonds maturing in 2022, 2024, 2026, 2029 and 2049, amounting to $7 billion.

You know, Apple has more than $200 billion in cash flow. Considering taxes and costs, Apple has also chosen to issue bonds to finance it. Apple said the funds raised by the bond will be used for general commercial purposes, such as stock repurchase, dividend payment, support operations, capital expenditure and so on.

Overall, even large companies holding cash are increasing their cash reserves amid a slowdown in the overall environmental economy. For example, in 2019, Tencent's cash and cash equivalents reached 122.838 billion yuan, up 17.41 percent from a year earlier, and continued to raise money. In the early days of Q2, Tencent raised the total principal limit of the global medium-term note program from $10 billion to $20 billion.

Secondly, at present, the domestic financing cost is relatively low, and the market interest rate is low. Some insiders believe that the financing environment of overseas markets has become less friendly, and Huawei has turned to explore the domestic market. Now that we are going back to the domestic market, let's have an interaction with the capital market and try for 6 billion yuan.

Third, as far as Huawei's business is concerned, the proportion of business in the Chinese market is also getting heavier and heavier. Recently, Huawei executives told reporters that from the perspective of future consumers and industrial trends, the domestic will be the focus.

In January this year, Ren Zhengfei, founder of Huawei, said in an interview, "We are not listed companies. We don't care much about beautiful financial statements." "If they don't want Huawei to enter certain markets, we can scale it down. As long as we can survive and support our employees, we will have a future."

The subtext is that the Chinese market has enough volume. A key sign, according to Huawei's 2017 earnings data, is that Huawei's revenue from China has outpaced the international market for the first time since 2005, accounting for 50.5 percent. By the end of June 2019, revenue in China was already above 58%.

With the growth of consumer business in China this year, it is expected that the domestic share will continue to increase. First, there is good interaction in the capital market, which is also conducive to the subsequent expansion of the domestic market.

Fourth, Huawei is also increasing the transparency of the company's information. Ren Zhengfei has always stressed that Huawei is not listed, such a large number of companies are not listed, especially so that foreign countries do not understand. Long-term bonds, Huawei will disclose more corporate information, let Huawei into the homes of ordinary people, known to the outside world. At the same time, it also makes Huawei's attention be improved in all directions.

Fifth, from a policy point of view, the central bank recently announced a reduction, and on September 16, 2019, it comprehensively reduced the deposit reserve ratio of financial institutions by 0.5 percentage points (excluding financial companies, financial leasing companies and automobile finance companies). This reduction released about 900 billion yuan of long-term funds. The real economy is the direction of financial support, supporting the development of private enterprises and small and micro enterprises. Therefore, the financing also has a policy background.