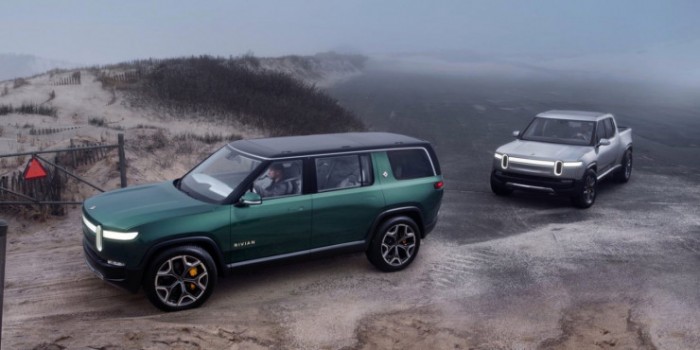 Sandy Schwartz, chairman of Cox, said: "We are impressed by Rivian's unique way of building electric cars and are willing to help Rivian expand its influence around the world to drive the electrification of the world as a whole."In addition to getting a stake and participating in Rivian's business operations, Cox also occupies a seat on Rivian's board of directors.

Under the leadership of RJ Scaringe, a 36-year-old young CEO, Rivian has become an absolute novelty in the U.S. automotive market. Its products are the most popular pickup trucks (R1T) and SUV (R1S) models among American consumers.

When it comes to Rivian's most attractive technology, it can't bypass its variable modular platform, skateboarding. The platform can integrate battery pack, drive module, suspension and cooling and braking system at one time. Such a design can not only reduce the center of gravity of the vehicle, improve the driving stability, but also excavate more riding and storage space.

That may be why the giants are betting on Rivian. In February, Rivian received $700 million from Amazon. Two months later, Ford also smashed $500 million on Rivian.

Cox has a wide range of businesses, including some that are closely linked to car sales services. Such as Kelly Blue Book, a familiar consumer information website, Dealer.com and Dealertrack, the data services of Autotrader, retailers, and Manheim., the car auction business.In the future, Cox will do its best to help Rivian explore the most suitable service operation, logistics and digital sales path.

Although it is a new company that has broken into public vision in the past two years, CEO Scaringe, a graduate of MIT's Department of Mechanical Engineering, became obsessed with the development of electric vehicles more than a decade ago.Rivian is likely to become Tesla's main competitor in the future, with Amazon's traffic portal, Ford's manufacturing experience and Cox's operating service network. Most importantly, in addition to the hottest pickups and SUVs, Rivian plans to develop 18-wheeled electric heavy-duty semi-trailer trucks whose direct competition formally targets Tesla Semi.

It is reported that the R 1T and R 1 S models will start mass production by the end of 2020. To boost capacity as soon as possible, Rivian bought a Mitsubishi plant in Illinois in 2017, which is currently under renovation. Now that Rivian has more than 1000 employees, Rivian will enter the international market in 2021 if the products are produced smoothly.

Rivian's momentum in recruiting talent is equally fierce.As far as we know,According to British data, Rivian has dug dozens of employees from Ford, McLaren and Tesla, and 12 of them have gone to Rivian, along with Baiton, which is as good as money. However, Faraday's future is the most injured in the "digging war", with at least 34 employees recruited by Rivian. Interestingly, Rivian's newly appointed CTO Mike Bell once held the post.appleVice president.

After embarking on the road of financing, Rivian seems to have suddenly had the "big law of absorbing stars." Before getting Amazon and Ford, Rivian finalised a $450 million round of financing, plus $350 million for Cox, with at least $2 billion in hand. However, the company declined to disclose current valuations and the number of shares in Scaringe (but to be sure, Rivian is still an independent company).

In the future, a new unicorn is expected to emerge in the field of electric vehicles in the United States.

Related news
Ford invests $500 million in Rivian to build electric cars on the Rivian platform
Ford invests in electric pickup truck company Rivian for $500 million
Rivian's "Star-sucking Act" with a total financing of more than $2 billion has been completed
Tesla competitor rivian raised $2.5 billion and Amazon continued to follow suit
Tesla's rival rivian built a new factory: with a capacity of 200000 vehicles and a minimum annual salary of 360000 workers
British PM meets Bezos: Wants' Tesla killer 'Rivian to build factory in UK
U.S. electric pickup brand Rivian is a major shareholder in Amazon and Ford, which are IPO-listed
Tesla rival rivian will produce its own battery, and a new factory is under construction
Tesla killer Rivian hits Nasdaq, up more than 53% at one point
Hot news this week
Templates for creating new Twitter in the future? Musk's praise of WeChat has triggered a heated discussion on the whole network
Tencent Music's TME live will re-screen Jay Chou's concert on may 20 and 21
Sony's new LinkBuds S headset parameter exposure: only 4.8 grams of comprehensive battery life 20 hours
Weak demand in the mobile market! Domestic shipments of mobile phones fell 40.5% in March to a two-year low
Henan 4 village bank line cannot withdraw cash? CBRC responds! The public security organs have registered an investigation
Baidu: In 2021, an average of 56 billion malicious information of all kinds will be intercepted every year
"Chinese version of LV" is re -executed 680 million! Reporting the property clues of the chairman, up to 8.66 million yuan
Pig companies continue to increase technology, just launched the smart pig farm, another 100 million to set up a technology company
The Jingdong Express bulk order sent to Shanghai across the country is completely static? JD.com: Not true No such information has been published
"Tencent's more than 30-year-old employees account for nearly 60% of them" on the hot search Netizens: Don't mention 35 years old, start to mention 30 years old
The most popular news this week
The domestic screens are rolled to the 2K screen. Why don't Apple follow the roll?
Meizu 19 series coming? Meizu mobile phone appearance patent disclosure: the return of secondary screen
Jingdong crowdfunding 10000mAh mobile power supply: with Apple Lightning and Type-c dual wires
Mobile phone chip CPU energy efficiency ranking: it is comparable to A14
What can we learn about m& # 111nkeypox cases in many countries around the world?
Alibaba Daniel Zhang connects 300 platform merchants: do more practical things for merchants
At the age of 58, he was elected as the chairman of Everbright Bank! Former President of Bank of China and Construction Bank
Buy An Audi or a Tesla? Audi's new electric vehicles are on sale: from 300,000
The first domestic Tianji 1300 mobile phone did not fire first! More than 260,000 people made reservations
The Chinese team officially made up for the bronze medal in the Tokyo Olympic relay! Su Bingtian responded excitedly