What does Huawei do to solve the core problem of AI?

OpenAI's recent research shows that people's demand for computing has increased by more than 300,000 times in six years since 2012 alone, an average of 10 times a year, far faster than Moore's law.

As we all know, as AI's post - entrant,Huawei boldly proposes to provide for the industry.

This is also an important reason why the upcoming 2019 Huawei full connection Conference has attracted much attention.

In the late 17th century, the British mining industry, especially coal mines, has developed to a considerable scale, relying on manpower alone, animal power has been difficult to meet the requirements of removing mine groundwater, and there are rich and cheap coal as fuel. The need for reality motivates people to commit themselves to

One hundred years later, Americans invented and realized the widespread use of electricity, which led to the second industrial revolution in the 19th century.

In 1946, with the invention of the first binary computer in the world, human beings entered the third industrial revolution in the 20th century. The development of information technology, especially the popularity of mobile Internet, has greatly changed human life.

In the 21st century, human beings are ushering in the fourth industrial revolution represented by intelligent technology. New technologies such as artificial intelligence, Internet of Things, 5G and bioengineering are integrated into all aspects of human society, driving changes in global macro-trends, such as sustainable social development, new momentum of economic growth, smart cities and industrial numbers. Characterization transformation, consumption experience, etc. 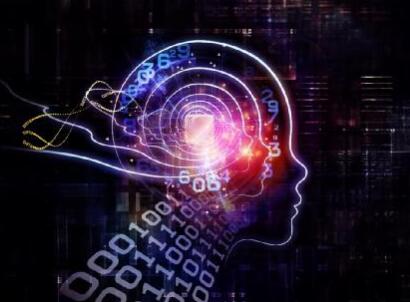 The times seem to have returned to the 17th century, when there was a great demand for non-living power in the mining industry. In the 21st century, artificial intelligence also put forward a strong growth demand for computing power, according to the latest analysis by OpenAI, from 2012 to 2018, the largest artificial intelligence training operation in the use of computing power increased by more than 300,000 times, will double every 3.5 months, far exceeding the growth rate of Moore's Law (every 18 months the performance of the chip doubled). There is a huge contradiction between the rapid increase in demand for AI computing power and the slow increase in conventional CPU computing power (10% per year), which has caused a global movement of core-making, accelerated cost reduction of computing power and the popularity of AI applications.

The three aspects of artificial intelligence (industrial cloud computing and edge computing), data (industrial big data) and algorithms (industrial artificial intelligence), in China, based on population size and economic development, are in the leading position in data and industrial applications in the world. However, AI computing resources are scarce and expensive, and more and more powerful AI computing power is needed in various industries. There are three bottlenecks in AI development at present: expensive computing power, difficult use and difficult access to resources.

Major manufacturers of large-scale AI training chips in the industry, such as Invida, Google and Huawei, have launched their own AI training chips. Nvidia Tesla V100 GPU provides up to 125 TeraFLOPS in-depth learning performance with a maximum power consumption of 300 watts. At the Google I/O 2018 Developer Conference, Google launched the third generation TPU 3.0, providing up to 90 TeraFLOPS in-depth learning performance. Huawei released the Rise and Rise 910 AI processor for AI training scenarios at the Full Connection Conference in October 2018. Rising 910 AI processor is the single chip with the highest computing density. It is suitable for AI training. It can provide 256 TeraFLOPS with the maximum power consumption of 310 watts. 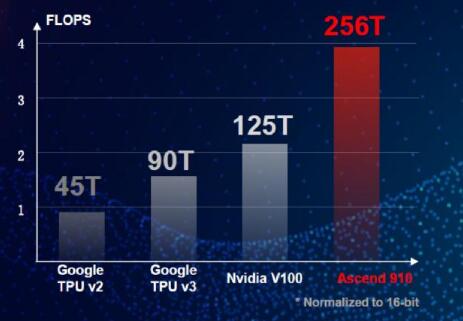 Huawei has focused on ICT infrastructure research and development and construction for decades, with a deep understanding of the use scenarios of operators and enterprise users to

Based on a unified Leonardo da Vinci architecture, Huawei can support chip specifications such as Ascend-Nano,Ascend-Tiny,Ascend-Lite,Ascend-Mini,Ascend-Max, with smooth expansion from tens of milliwatts of IP to hundreds of watts of chips, naturally covering the end, edge, and cloud deployment.

The time-consuming of AI training is strongly related to the complexity of the model, the allocation of data sets and hardware resources. In large-scale training such as astronomy research, autopilot training, weather prediction, oil exploration, etc., hardware resources are particularly important. The rapid development of AI benefits from the improvement of hardware and cloud computing technology. It is beneficial to the training model of a large amount of data brought by the digitization of various industries. The development platform requires from raw data to annotated data, training data, algorithms, models, reasoning services, to realize the life cycle management of tens of millions of models, data sets and service objects.

At the same time, without intelligence, the development of the whole stack is deep, AI has become the basic business of the cloud, to achieve cloud training and reasoning. Deploy on the cloud to support online and batch reasoning to meet the requirements of large-scale concurrent complex scenarios. Cloud, AI,IoT coordinates enable blue sea market, in intelligent home, Internet of things and car networking and other scenarios, build a comprehensive solution of cloud AI IoT, open up a new artificial intelligence market.

Huawei Global Industry Outlook (GIV) report shows that the global data volume will grow rapidly from 32.5ZB in 2018 to 180ZB in 2025. For enterprises, AI computing demand doubles every three months, and the application rate of AI will reach 80% by 2025. It is not difficult to find that Huawei, which has made breakthroughs in the field of arithmetic, stands above a tremendous fashion of the times.