According to Li Qin's high frequency of using shared charging treasure 2-3 times a week and the price after the industry's price hike, her spending on charging in the past month has been enough to buy a brand charging treasure.

But Li Qin remembers that he first contacted the shared charging treasure in 2017. At that time, the monster charged with the Alipay under the ant's gold clothing and launched the "1 cents charging 1 hours" activity. Not only is the consumer price low, but also the deposit-free can be achieved through sesame credit points, which has attracted a large number of users, including Li Qin, who are heavily dependent on Charging Bao, and quickly "accustomed" to the habit that users no longer take Charging Bao with them when they go out.

According to iiMedia Research, in 2018, the number of users of shared rechargeable treasures in China reached 196 million, which will increase to 305 million in 2019 and 408 million in 2020. 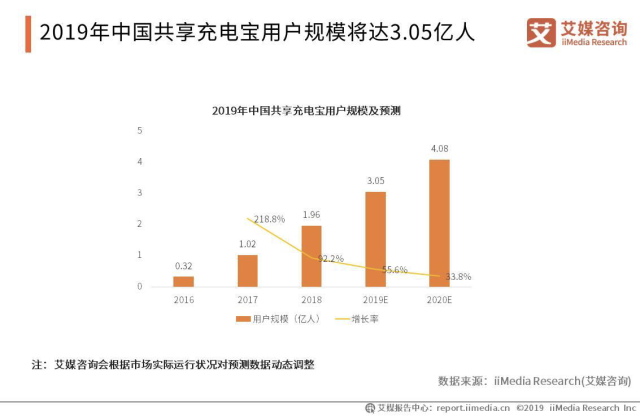 The industry generally believes that behind the rapid rise of the share charging treasure industry scale, deposit-free is one of the "merits" that can not be ignored.

A special research report on China's Shared Charging Bao Industry in the first half of 2017, also published by Ai Media Consulting, shows that the distribution of factors affecting the type of equipment selected by users of Shared Charging Bao, and "deposit" ranks first. 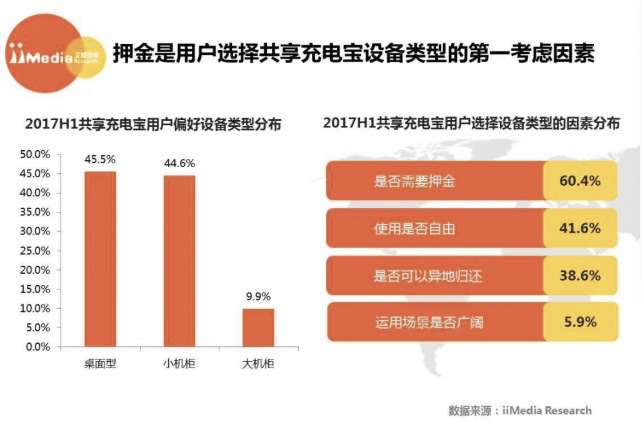 According to Tech Planet, the conversion rate of orders increased by 30% after the monster charges were exempted from credit. In other words, "deposit or not" affects about 30% of users'decision-making.

"If I had to pay the deposit, I would not have used it." Li Qin said firmly.

"After sesame credit is separated, we want to find some scenarios to let users feel the credit life." Chen Libin, head of operation of Sesame Credit Sharing Charging Bao, said that before that, the Sesame Credit Team had tried to buy a batch of Charging Bao, umbrellas and other small items to put in McDonald's, KFC and other places, so that creditworthy users can enjoy no deposit loan. But the effect is not warm.

The turning point took place in 2016, when Sesame Credit found the owner of a Shenzhen playground and came up with the idea of putting portable battery into the playground. The other side said that there is a company called call Technology also offered to release their own portable battery, they have more mature hardware. Therefore, under the introduction of the playground owner, sesame credit and calling technology reached a consensus on sharing portable battery cooperation. After three months of communication, collision, the two sides jointly developed the underlying code of credit lease.

December 20 of the same year, call Technology and Sesame Credit announced in Beijing that the two sides reached in-depth strategic cooperation. At the press conference, Wang Xi, general manager of Sesame Credit Life Department, said that deposit is the poison of shared economic development, relying on deposit easily makes the shared economy fall into the unhealthy business model of drinking poison to quench thirst; exemption of deposit is gradually becoming the standard allocation of shared economy, which can not only lower the threshold of use, bring more new users for partners, but also help them seize the tuyere of future credit dividend in advance.

According to the public information, more than 60% of the total orders from Sesame Credit account for more than one year later, and more than 10 billion deposits are deducted for Sesame Credit users.

"In product design, we saw some problems with the deposit of bicycles, so from the very beginning we directly contacted Sesame Credit to do credit exemption." Cai Guangyuan, founder and CEO of Monster Charging, mentioned it publicly.

Founded in March 2017, the monster recharged and worked with Alipay for 5 months after the company went online for 1 hours to recharge 1 hours.

When users use the monster to charge, they only need to turn on the Bluetooth, and then use Alipay to scan the two-dimensional code. The charging treasure provides two charging lines and six interfaces, which can satisfy six parts simultaneously.Mobile phoneCharge.

Chen Libin said that after entering the industry of shared charging treasure with sesame credit exemption, it soon became the industry standard, "We basically removed the deposit from this industry."

Nowadays, in addition to Head Shared Charging Bao's "Three Electricities and One Beast" (Street, Call, Small Electricity and Monster Charging), at least dozens of small regional Shared Charging Bao brands have access to Sesame Credit. And the threshold of sesame credit score is reduced from 600 to 550.

In addition, when the user reaches the upper limit when using the charge treasure, Alipay will deduct 99 yuan from the user's Alipay account (approximately the cost of a charging treasure) to the corporate account.

In this way, the credit score of sesame not only facilitates users on the free charge, but also guarantees the interests of enterprises on the supporting functions.

Trustdata, a large data monitoring platform for mobile internet, published in July this year the Development Analysis Bulletin of China's Shared Charging Industry in 2019, shows that 95.4% of the orders for credit deposit-free share charging have reached, and the overdue rate is less than 0.5%. Among them, 66.8% of users chose to use Alipay rental sharing charging device. 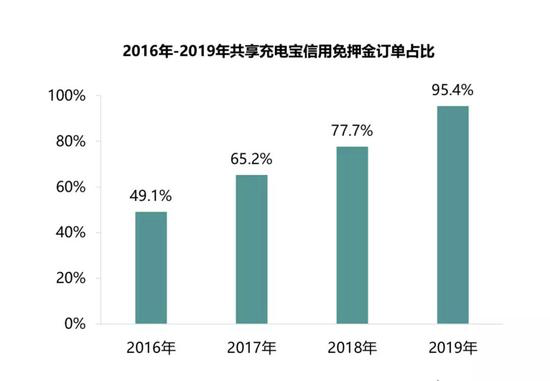 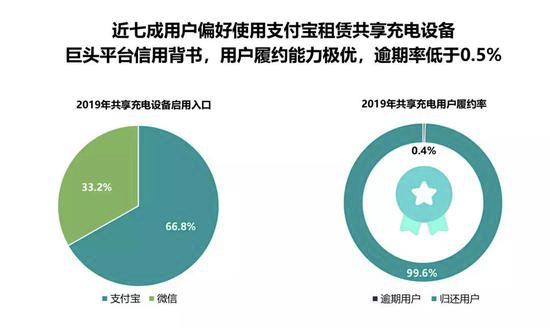 Photo Source: Trustdata 2019 Analysis of the Development of shared charging Industry in China

IResearch AI consulting statistics show that in the first quarter of 2019, Alipay accounted for 53.8% of the third party mobile payment transaction market in China, and ranked second in the first place, accounting for 39.9% in WeChat. 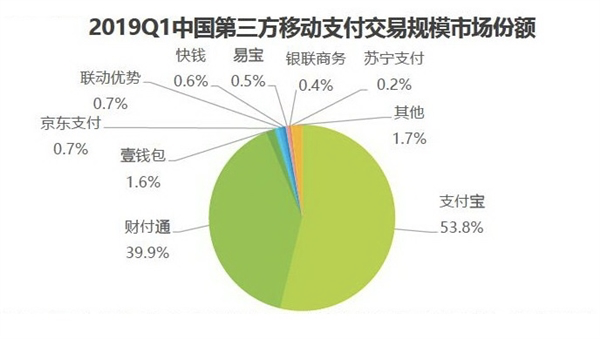 As the largest social platform in China, WeChat is catching up with Alipay's leading position in mobile payment in just a few years, relying on its own number of users.

But in the opponent's social business, Alipay can be described as a "repeated defeat." Alipay has launched a number of social products in recent years, such as "communication", "circle" and so on, most of which have had little effect. If we want to dig more life scenarios outside of society to improve the frequency of application use, user activity and so on, the sharing economy industry has undoubtedly become the best breakthrough at present.

Up to now, Alipay's credit free business has covered shared cars, sharing bicycles, renting materials, etc. According to Chen Libin, the current number of users of shared charging treasure is second only to that of shared bicycle. 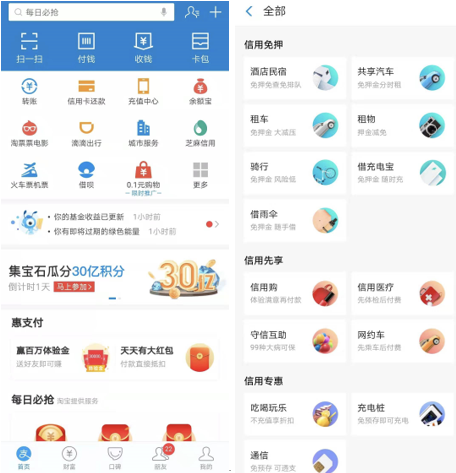 In order to speed up the development of the market, some industry sources said Alipay even in the process of working with a number of shared portable battery enterprises to "reverse paste." Portable battery, a company that has cooperated with Alipay, revealed that in order to promote sesame credit points, Alipay and the company cooperated in the "1 penny charging 1 hour" activity, although only 1 cent per hour was charged to the user, but it still paid 1 yuan per hour to the enterprise, which also meant that Alipay paid 0.99 yuan per hour for this purpose. However, this statement has not been recognized by Alipay.

The industry also said that in addition to the support of marketing activities, Alipay is still trying to match the merger of two head companies that share the rechargeable treasure industry. And in April of this year, news came out that Alipay's parent company ant clothing was coordinating the merger of street electricity and small electricity. If the merger was successful, the ant's gold suit would be injected into the new company to get more charging data.

From the enterprise background, street electric is the first company to share the charging industry with Alipay. According to the report of the Beijing News, Ant Golden Clothes also made adjustments to Street Electricity, but due to the patent disputes in Street Electricity, it finally disappeared.

In the view of many industry insiders, 2019 is a key year to share portable battery industry, not only the competition between brands intensifies, but also a lot of capital also pays attention to this industry, and the industry pattern will change. It is not known which shared portable battery enterprise can laugh to the end, but for now, Alipay is already a stable beneficiary.

Related news
Sharing charging treasure is still fighting. Alipay has laughed.
Google renamed airdrop like quick sharing to nearby sharing
Alipay pushed "shared medical expenses" has donated over 100 million yuan.
Android will have the'blanketed' feature, tentatively named'Nearby Sharing'
Samsung wireless charger charging trio more details exposure: up to 9W power
Hot news this week
Too many questions! Apple has changed the timing of the official release of iOS 16 series
Monkey acne cases have ranked first in the world that the United States has announced the emergency state of public health
Tencent and Logitech cooperation of the cloud game console Revelations: equipped with Android system configuration is low
Credit card points rule intensive adjustment online transaction points more "valuable"
High reserves and low cost experts: calcium ion batteries replace lithium batteries to stand up to the daily
Alibaba executives interpret financial results: the focus of the consumer side is no longer to attract new, but to do a good job in stratified operation
Losses in a single quarter of $ 23.4 billion a record, SoftBank did not carry the plunge of technology stocks and the devaluation of the yen
Sources say Samsung's Galaxy Z Fold4 is going up in price: a 512GB top unit will cost more than 13,000
The prevention and control of the American Monkey epidemic has failed. What should I pay attention to?
Is the micro -business headache? WeChat friends are suspected to have a big move: 7 can only be posted a week
The most popular news this week
After selling Tesla for $6.9 billion, Musk said he was not selling it, but a survey said he was still selling it. The title of the world's richest man may not be guaranteed next ye...
Distributed database OceanBase announced 4.0 product release, single -machine deployment performance is super mysql
The three major indexes of the US stocks opened sharply: ROBLOX fell more than 4%, Twitter and Tesla rose more than 3%
Japan has confirmed that China has overtaken the US for the first time in the world's top three indicators of scientific papers
A wake-up call for Apple? Foxconn says it is feeling the sting of slowing demand for smartphones
Joining Chip Alliance could serve as bridge, says South Korean Foreign Minister
Joe Biden also mentioned Chiplet? An unexpected A-share buzzword in A White House briefing
Nio Li Bin responds to mobile business rumors: This should be the definition of other people's imagination to us
Amazon is pushing a feature called "swipe to pay" that scans your palm to pay in seconds
Text message color, picture quality compression! Google calls out Apple for improving cross-device messaging