The strongest duel in history! The pre-sale of Huawei Mate30 in line for the iPhone 11 is booming

Micro-blog shows that the apple store on Nanjing Road Pedestrian Street in Shanghai still has long queues at 20 p.m. at 5 p.m., on average, it needs queuing for half an hour to about an hour, and the invoice still needs to be lined up. In addition to the dark green version can not be bought on site, other models of color can be bought.

According to Securities Times e, there is still a long queue outside the apple store in Yitian Holiday Square in Shenzhen, mainly fruit fans who have already booked new planes to pick up the goods, and the store is also very noisy and popular. 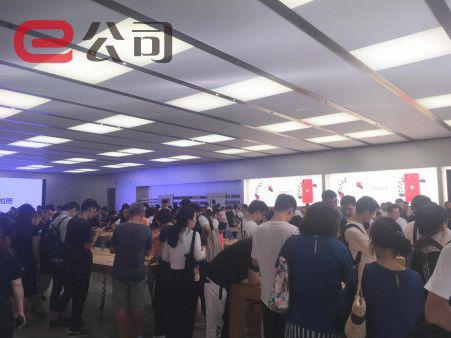 At Wangfujing Apple Store in Beijing, there was a queue of "fruit powder" at 7 a.m. Because it is an appointment machine, there are not many people waiting in the first line, about 20 to 30 people. 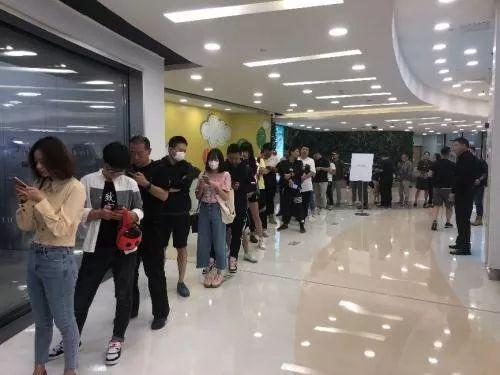 In fact, in China, such as Chengdu, Hangzhou, Ningbo, Guangzhou, Hong Kong and other cities, Apple stores outside the queue. 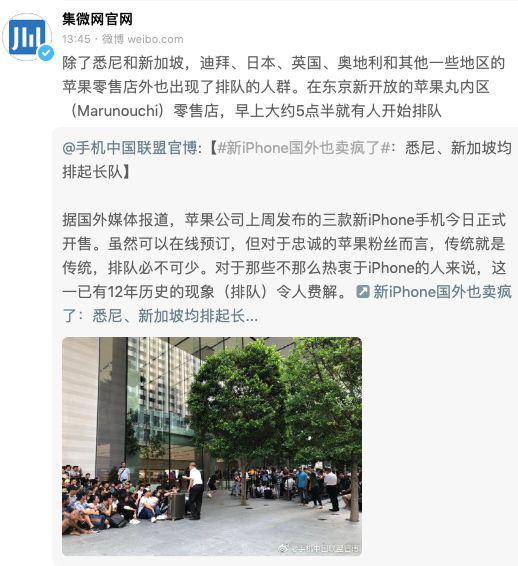 According to foreign media reports, Apple's new modelIPhone11 seriesMobile phoneAfter the official sale, there are signs of a recovery in demand for Apple phones. "the queue at Apple's flagship store in New York is up about 70 percent from last year, and demand looks strong," Wade Bush Securities analyst Dan Ives (Dan Ives) wrote in a report to investors. Another positive sign for Apple, Mr. Ives said, was that consumers buying the new iPhone "lined up until the afternoon."

Sean Harrison (Shawn Harrison), an analyst at Longbow Research, a market research firm, said Apple was likely to see "rising demand for iPhone" and that "the trend of attention to the latest iPhone is surprising."

At 20:00 on september 13th, the iphone 11 line opened for sale at tmall. According to data released by Tmall on September 16, the opening night of the sale a minute turnover of less than 100 million yuan. Among them, the iPhone 11 Pro Night Green was several times emptied, Apple Tmall flagship store overnight replenishment four times. Sales on the first day of iphone 11 sales rose 335% from the iphone xr, according to tmall.

At 8:00 a.m. on September 20, the new products of the iPhone 11 series went on sale at the same time all over the world. Five minutes later, Mr. Chen of Xiasha, Hangzhou, received a new machine from the hummingbird brother, and became the first person on the platform of the Skycat "iPhone 11". 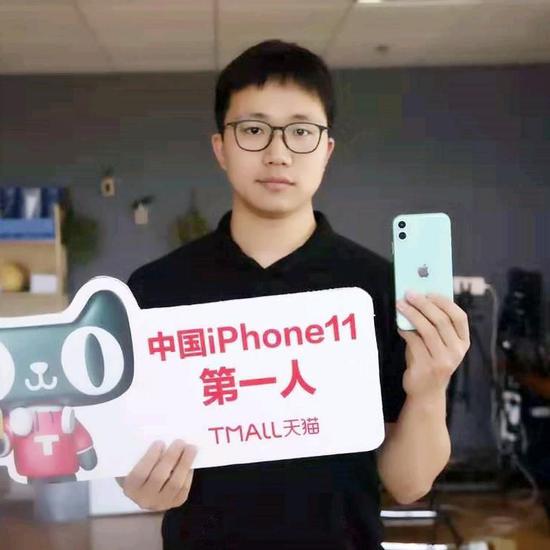 According to data released by JD.com Mall on Sept. 14, iPhone 11 series pre-sale opens for one minute and orders are placed at 341cities across the country. In just five minutes, the iPhone 11 Pro series sold out. Overall, pre-sale sales on the first day of the iPhone 11 series were 480 percent higher than last year's iPhone XR series.

Another evidenceSUNINGAccording to official data, the new product of the iPhone 11 was launched simultaneously in 4,000 Suning retail Yunmen stores nationwide, and the total number of reservations for the three new machines on the platform of the Suning eBay Online has exceeded 3 million. Of all the reservations, the most popular is the green version of the iPhone 11 Pro (256G), with a single model reservations exceeding 500,000.

According to the Beijing News, the first batch of customers to buy an iPhone is generally green. In addition, it learned from the Apple dealer in Zhongguancun, Beijing that the current dark-night green version of the iPhone 11 Pro and the iPhone 11 Pro Max is the most sought after, and it has to pay nearly 1,000 yuan to buy, while other colors do not need to be increased for the time being. 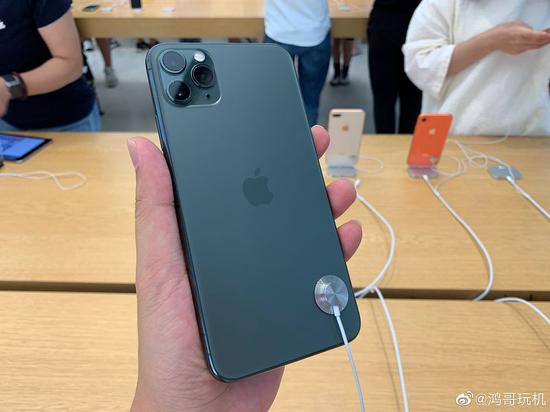 As of 20 June, the official ecommerce platform, such as JD.com and SUNING, had sold out the dark green version of the iPhone 11 Pro series, according to the news agency. The channel is in stock, but the premium is at least 500 yuan. IPhone 11 is green and purple is also out of stock.

Release time of 5G version to be determined

On September 19, the day before the launch of the 11-series, Huawei officially launched the new Mate30 series and started pre-sale. In the past, Huawei's new product launches were held in October. The move triggered speculation that Huawei was going to have a hard-fought competition with Apple?

On September 19, Munich time, Huawei launched the 2019 flagship mobile phone Mate30 series, a total of two models: Mate30 and Mate30 Pro. So what are the highlights of this series? The fund is sorted out as follows: 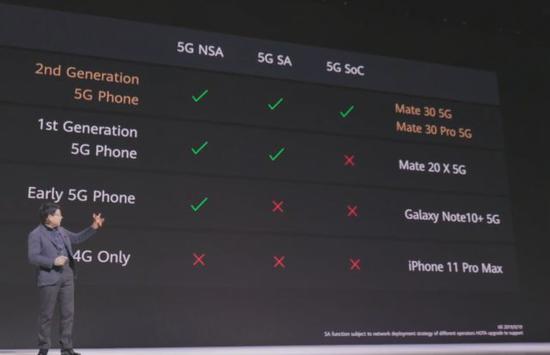 Yu Chengdong, CEO of Huawei's consumer business, also mocked Apple's new product at the launch, even though it did not have 5G functionality.

2. Four pictures of the film

The camera setup is no longer a "bath bar" but more like a "black hole" and looks a bit like a card camera from behind,Huawei says. However, some netizens believe that Huawei the back of the new machine like "roller." Washing machine". 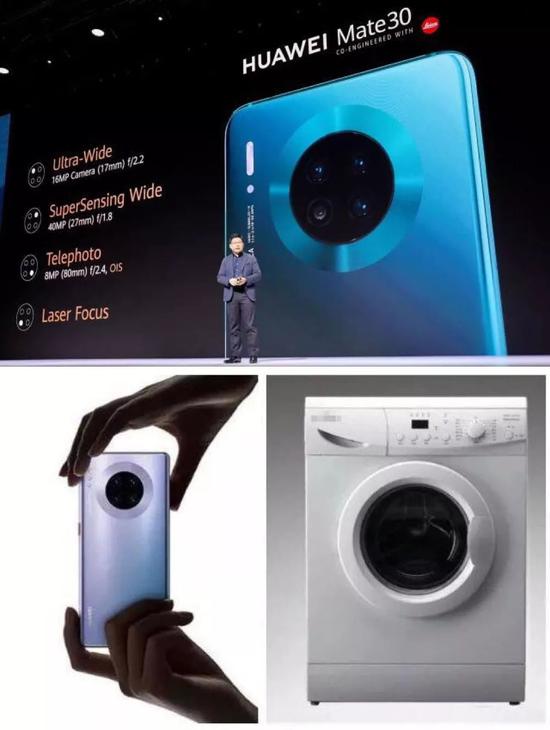 Yu Chengdong also made fun of the array of cameras on Apple's new mobile phone, the iPhone 11, which imitates the design of Huawei Mate 20, saying that square cameras have led the industry's design trend and become a landmark design.

According to the introduction, Huawei mate30 series uses digital touch instead of physical keys to adjust the volume on the side screen. Only one power key is reserved, which brings full touch interaction and makes the whole machine very simple.

In terms of batteries, Huawei Mate30 series opens the era of wired and wireless super fast charging, with 4500 mAh batteries built into the thin fuselage to enhance the endurance experience and support 40W wired charging and 27W wireless fast charging.

However, instead of using Huawei's own operating system, the Mate 30 series uses an open source version of Android, when the Mate 30 series will not be able to use Google's GMS service. Yu Chengdong said Huawei will provide its own mobile service HMS.

It is also noteworthy that the forthcoming Mate 30 series is still a 4G version, and the 5G version is expected to be released around November. For this reason, many netizens wrote messages under Yu Chengdong micro-blog, saying they looked forward to the 5G version, and even some netizens called "PPT 5G". 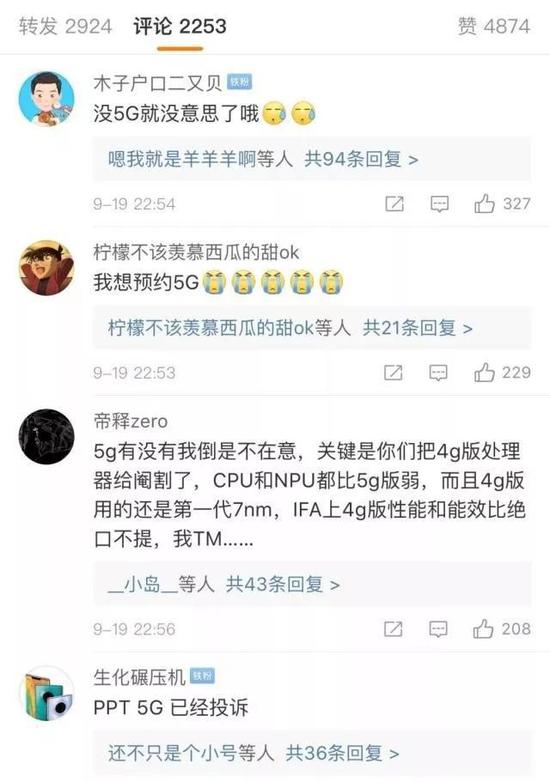 It is understood that the domestic price will be announced at Huawei's domestic conference on the 26th. It is estimated that each model will be about 2,000 yuan cheaper than that of foreign countries. It will be officially launched at Huawei Mall and online authorized e-commerce platform, Huawei authorized experience store and offline authorized retailers at 18:08 on the same day.

That is to say, Tianmao Jingdong two platforms Mate30 overall pre-sale has exceeded 120,000 units. In addition to other platforms and Huawei's official website, which has unpublished pre-sales volume, pre-sales in more than a day obviously exceed 120,000 units, or even 200,000 units or better! In a previous report released by Guo Mingpi, an analyst at Tianfeng International, Huawei Mate 30 series estimated shipments of about 20 million units in 2019.

The new products of Apple's iPhone 11 and Huawei's Mate30 series have also attracted the revelry of the industry chain.

Yesterday, stimulated by the release of Huawei's new aircraft, the Huawei concept index opened high in early trading, a number of stocks hit the limit, and finally closed up 0.63 percent. 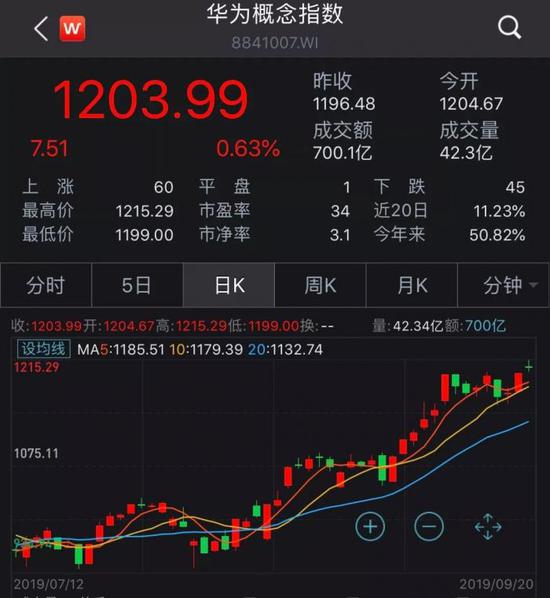 Huawei concept stocks have been strong since August, and the index has surged 30% in the past month or so.

Apple's shares have risen 4.31 percent since September, as expected at the launch. Apple shares hit an all-time high of $226.42 on September 12 th after the launch. 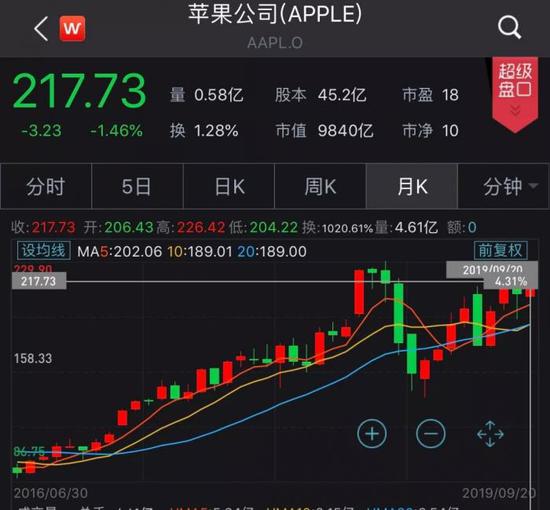 Guo Mingpi of Tianfeng International said in a previous research paper that the market demand for high-end models of the iPhone 11 in the United States is still strong, and its share in the Chinese market is expected to gradually improve. Upgrading the shipment of the iPhone 11 series to 70-75 million units in 2019, the industry chain is expected to grow steadily in the fourth quarter of 2019.

However, Guo Mingpi is still optimistic about the sales of Mate 30 series. He believes that the shipment of Mate 30 series is expected to reach 20 million units. The main reason is that about 70% of Huawei's high-end mobile phone shipments come from the Chinese market, and the lack of Google GMS has limited impact on sales.

Mr guo expects the Huawei to adopt two strategies in 2020 to reduce the risk of potential recession in non-china markets: the possibility of reducing prices for older models for non-china markets, and efforts to boost china's market share to offset the non-china shipping slump.