A few days have passed since the launch of the 11-series, and it is believed that the first-time subscribers have used their new phones. With the launch of the iPhone 11 series, many new testing projects have come up, including speed testing.

Recently, the foreign "UP Master" was filmed andupload A test video comparing the running speeds of the three models of the iPhone 11 Pro, the XS and the X shows the results.IPhone XS runs even faster than iPhone 11 Pro。 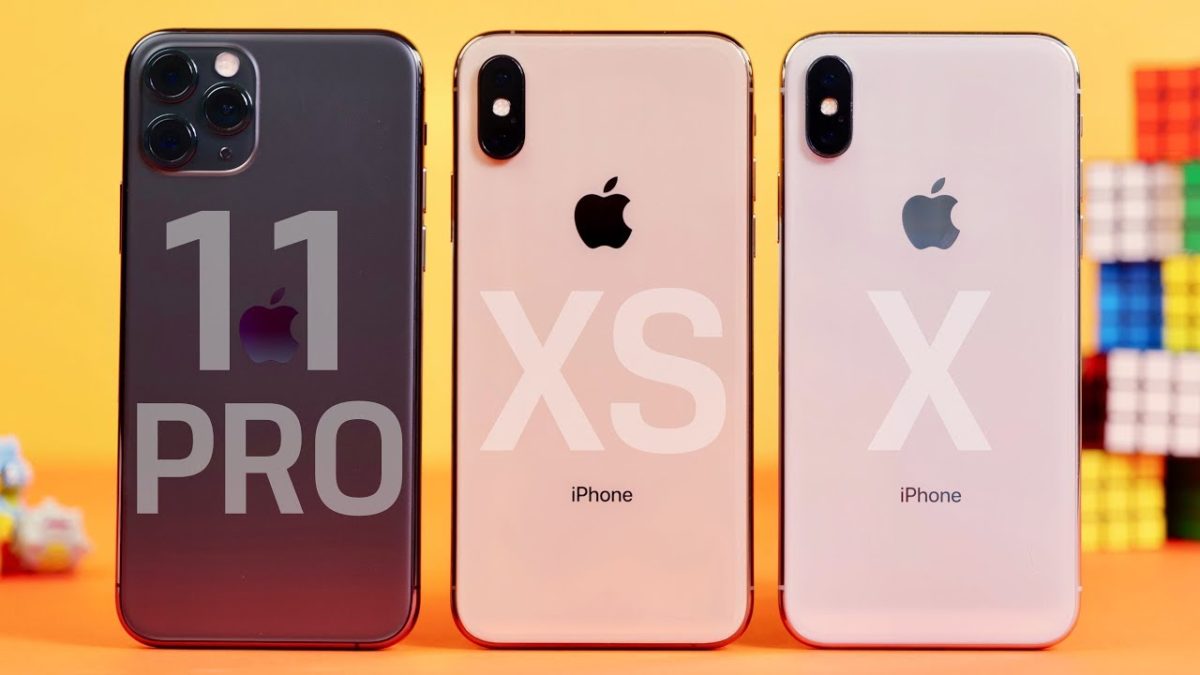 From the video, the UP host runs the same set of "App startup speed tests" on three phones, running two rounds of tests in the same order and step on iPhone 11 Pro,iPhone XS and iPhone X, which run iOS 13.0.

Applications for testing include 16 different types of applications, including Snapchat, Instagram, native camera, PS Express, PUGB Moblie, etc. (Clock applications for timing are excluded). The steps of testing are also relatively uniform. For social applications like Snapchat and Instagram, only mobile phones can be loaded into the home page. For some creative late-stage applications, such as PS Exprss and Video Shop, the time of importing and exporting materials will be counted. Hand-based applications will wait for the progress bar to load. It's done as soon as it's done.

After a full run, the results of the three models are as follows: 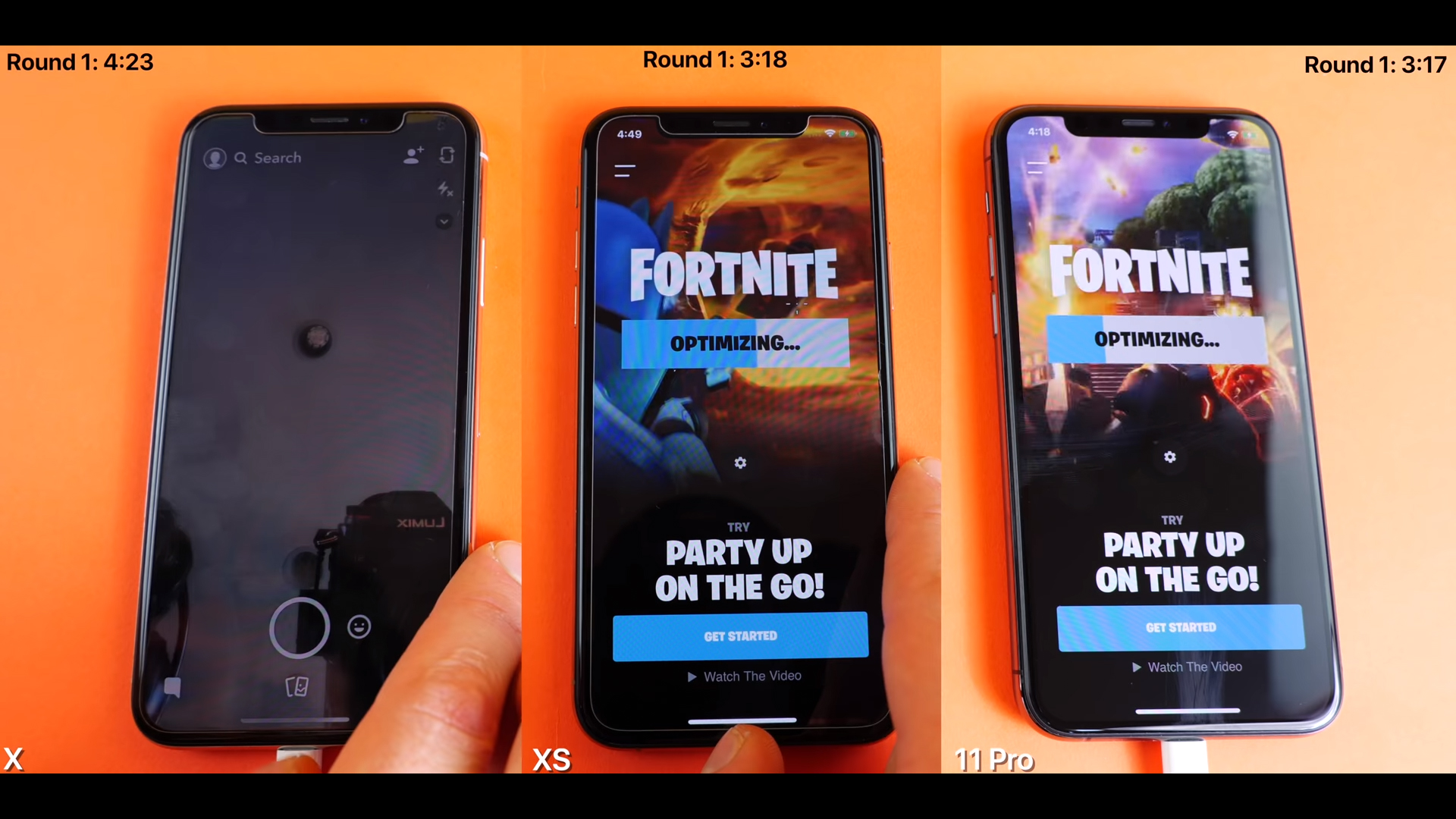 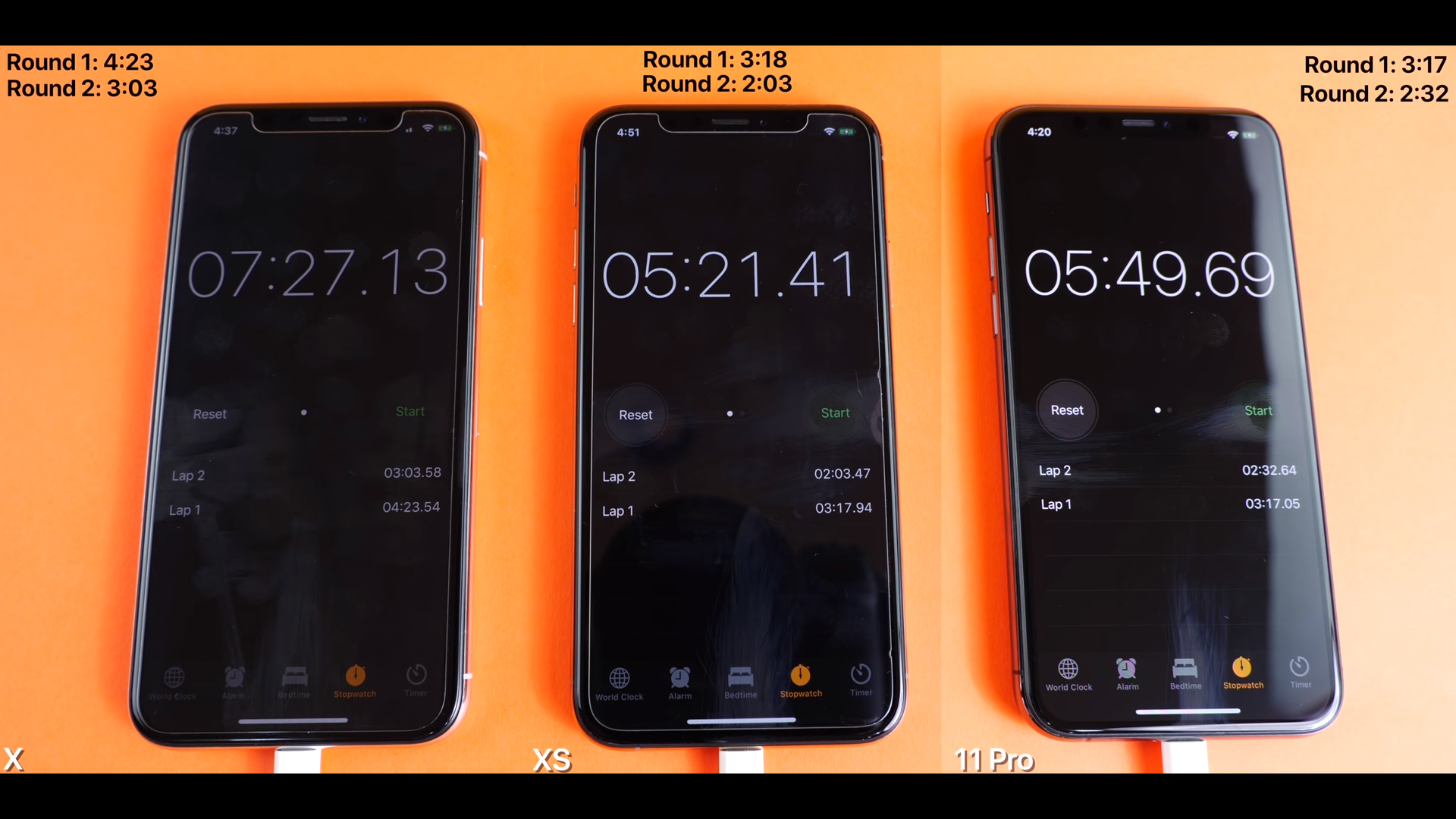 Although Apple claims that the performance core of the A13 bionic chip runs 20% faster than that of the A12 bionic chip of the iPhone XS, the test results do not show the advantage of A13. In addition, the use of 4GB RAM in both the iPhone 11 Pro and the iPhone XS may also be a major reason. After all, memory has a direct impact on the "retention rate" of the application background. And,purportedly The camera application of the iPhone 11 Pro has been redesigned to take up more memory in operation, resulting in memory pressure.

Related news
Overseas, the signal of the iPhone 11 Pro series is better, but there is still room for improvement.
Disassembly confirms that the iPhone 11 Pro Max has only 4 GB of memory particles
What is the ranking of the running speed of the three models compared with the iPhone 11 Pro
The iPhone 11 Pro Max was named the best in Consumer Reports
Comparisons of Phone 11 Pro vs. Huawei Mate 30 Pro Cameras
Is it necessary to replace the original charger? Charging Evaluation of the iPhone 11 Pro
Recycle treasure photo mobile phone maintenance index to check the best value of iPhone Pro Max
iPhone 12Pro、Pro Max will have 120 Hz high screen: the most fluid iPhone eve
Hot news this week
Synergy Research released 2020Q1 China public cloud market report Baidu Intelligent Cloud stable third
Wechat has not done this function for N years! Use this app to make up for the defects of wechat
2020 wechat Dragon Boat Festival travel big data: the number of wechat payments increased by 43% year on year, and the post-90s most like to travel
Gree's response to "being disqualified from winning the bid": a mistake made by the bidder in sorting out the materials
NASA's face touching Necklace: vibration warning to prevent the spread of new coronavirus
IPhone 12: it's more like throwing away the charger
Microsoft official free data recovery tool windows file recovery experience
Apple wants to know: what do you do with the charging head of the old iPhone?
This design Chinese old man Le Du suit! Norwegian one-car push mini-stepping car: human electric two powe
Amazon cancels disposable plastic products in India
The most popular news this week
TSMC 5nm was snatched by Huawei and apple this year
India's telecommunications minister said it had decided to move Huawei out of the country's 5g network construction plan
Huawei mobile phone new patent exposure: camera equipped with "SLR Lens"
5000mAh large battery and 65W super fast charging! These phones help you get rid of charging anxiety
Source: Samsung Galaxy note20 or series is the most expensive
Huawei Hongmeng 2.0, EMUI 11 all mobile phones, television, PC platform
59 Chinese apps banned, India's Internet appears a lot of vacuum zone
Google, iqiyi invested in the $1 billion "small giant" still did not support.
Samsung Galaxy note 20 ultra effect picture exposure: new color
Xiaomi 10 customized ice sealed heat dissipation back clip BR11 disassembly: the secret of cooling to 15 ℃ in 1 minute