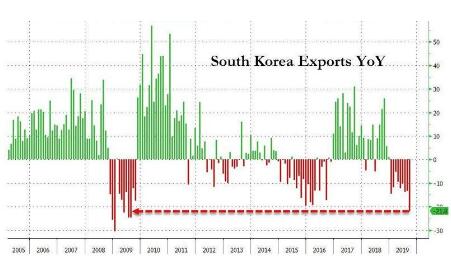 Kyobo Securiti economist Lee Young Hwa said: "Export declines are likely to continue for the rest of the year, which will put pressure on South Korea's economic growth and the won."

SK Securities economist Ernst & Young said: "The main question is whether chip sales have improved. If the number of large companies in China and the United States increasesThe serverSpending may benefit South Korea from chip supply, but we need to continue to see if this opportunity will become a reality.

The decline in global demand has damaged South Korea's corporate investment and recruitment, making the country's economy the slowest expansion since the global financial crisis, according to an analysis by the Associated Press. As there is no sign of an end to international trade tensions, the contradiction between South Korea and Japan over export restrictions has deepened and confidence in key supply chains in Asia has been undermined.

Most economists believe the Bank of Korea will ease its policy in October or November to help boost economic growth. The bank cut interest rates for the first time in three years in July, cutting them to 1.5%, only 25 basis points higher than its historic low.

South Korea is the first major exporter to publish trade data every month, so it can give people an early understanding of global trade. As the world's leading exporter of computer chips, ships, automobiles and petroleum products, South Korea's September data are a major danger signal for the accelerated decline of the global economy (and global stock earnings expectations).