The special model name is actually a customized product for the latest Atos supercomputer Bull Sequana, which is another achievement of the second generation of Xiaolong in the field of supercomputing. 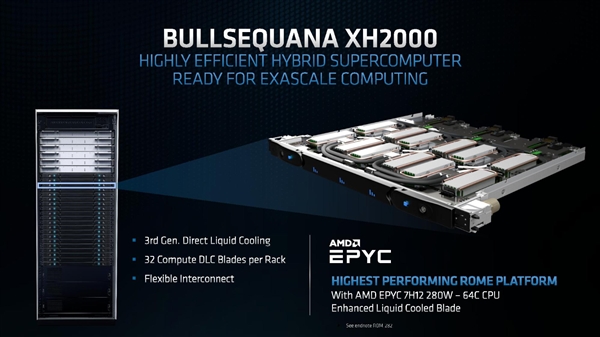 Atos also announced almost synchronously that it had set four new world records with the new Xiaolong 7H12.—— At the beginning of the second generation Xiaolong's publication, there were more than 80 world records. Now there are more than 100, and they are increasing.

Although the increase is small, every point is precious in the field of high performance computing, and Atos praises Xiaolong 7H12 for its high energy efficiency. Although its thermal design power consumption has increased by almost a quarter and liquid cooling has been used for new overruns, this is not a problem for power-insensitive and performance-hungry overruns.

AMD also stressed that Xiaolong 7H12 can reduce the total cost of TCO ownership of customers.