Through the program, Winfrey will interview selected writers throughout the series and premiere a new play every two months.

In fact, when the Apple TV was released in March, Apple hinted that the Oprah Book Club would log on to Apple TV.

For the first issue of Book Club, Winfrey chose Ta-Nehisi Coates's "Water dancer" (The Water Dancer). The episode will premiere on November 1, the first day of Apple TV's launch. 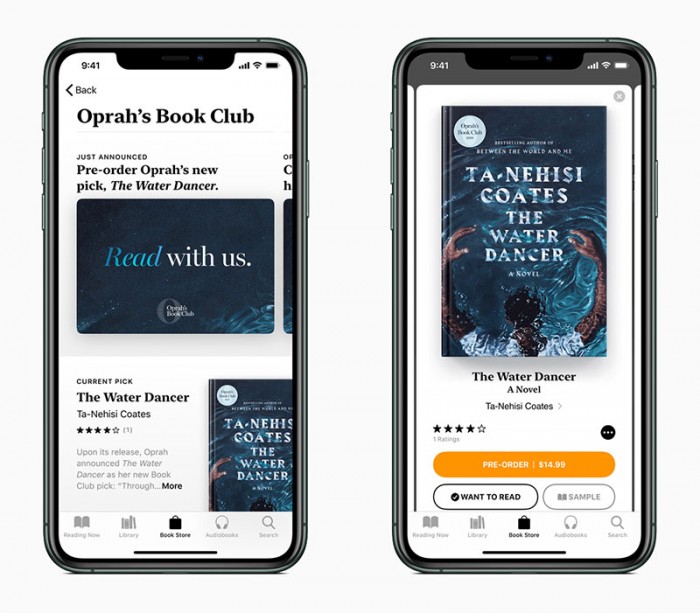 In response, Apple CEO Tim Cook (Tim Cook) said in a statement: "few people in the world can bring us together like Oprah, and her compassion and grace in solidarity with the power of books are unparalleled. We are honored to provide a new platform for the Oprah Book Club. "

This is not the only partnership between Winfrey and Apple. Earlier this year, Apple said in its Apple TV release that Winfrey would release two documentaries on the service.

Apple announced earlier this month that the, Apple TV, which costs $4.99 a month, will be launched in 100 countries. Users who buy new Apple devices will be given a free Apple TV. For one yea

Related news
Apple Reveals Apple TV App: Preparing for Streaming Media Subscription Service
Apple TV wins talk show Queen Oprah's Book Clu
Comedy sci-fi thrillers watch Apple TV's new play
The new play on Apple TV was renewed before it was officially broadcast
How do you collect Apple TV's free wool for a year?
How do you collect Apple TV's free wool for a year?
What's the year free "wool" for Apple TV?
Hot news this week
Britain and China are discussing involving Chinese enterprises in the construction of high-speed rail in the country
Amazon employee No.1: the giant is unstoppable, but there is evidence for the split
100% full screen? Samsung Galaxy note 20 first exposure: or in July
Xiaomi tmall super brand day ultimate battle report: the first sales volume of 61 items sold for 300 million yuan!
US announces import tariff on EU aircraft Airbus: Eventually will be paid by U.S. passengers
It's worth a try to use the mobile phone with homogeneous appearance
Paper clip Cope millet 10: Why is your home's Wi-Fi so slow?
Musk confirmed that the new Tesla Model s and model x range increased to 630 km
[multi figure] learn about the windows 10x system for dual screen devices
Fold for fold: is Motorola Razr really a 100% mobile phone?
The most popular news this week
The failure lesson of Baidu's sky price acquisition case
In order to resume Foxconn's "big move": the reward for new employees is more than 7000 yuan
Can recording sound make money? Facebook pays users to help improve speech recognition
The global sales volume of Volkswagen Group in January was 837000, with a year-on-year decline of 11.3% in China
Mattel announces the remote control version of Tesla cybertruck
Nail households finally take off their hats! Xiaomi 6 users change Xiaomi 10: Lei junbixin
U. S. cellular will use Samsung devices to promote 4G LTE and 5g networks
Netflix's rapid growth in the U.S. market slows down, aiming to seize the opportunity in the international market
Google to further update redesigned Google Maps
Reports claim the Trump campaign bought a headline ad space for YouTube on Election Day