After the price dive of the iPhone 11 Night Green, speculators are eyeing Huawei Mate 30

According to Qianjiang Evening News, a digital square in Hangzhou business. Mobile phoneXiao Wu, of the business, said that on Sept. 21, the strongest dark green version of iPhone "broke down", and other versions of iPhone 11 had long since fallen below official online prices. Xiao Wu said,

Why did the wholesale price of the late-night green version of the iPhone suddenly drop by 700 yuan yesterday? Xiao Wu said,Because the market suddenly arrived a large number of dark green version of iPhone, everyone sold, resulting in a big jump in prices.In addition, many digital speculators have been targeting the release of 26 days.Huawei Mate 30 series.

It is worth mentioning that some of the users who received iPhone 11 said on social media that their phones were hot and signal-poor.

"Apple's iPhone 11, released last week, is not so much a mobile phone as a camera," according to a recent report by CNBC, a financial media in the United States. Because Apple spends a lot of time and energy promoting its camera features.

Both the iPhone 11 dual shot and the iPhone 11 Pro/Pro Max show Apple is working on the iPhone camera. One of the main reasons Apple has focused on camera improvement this year is that consumers care about camera quality and more users like to take pictures on their mobile phones. IPhone is the most used photo-shooting device for Flickr users, according to an analysis of uploaded photos by Flickr, a photo-sharing site.

Julie Ask, an analyst at Forrester, said: "one of the goals of consumers upgrading smartphones is to get better photography.

Because there is little positive change between the iPhone 11 series and last year's iPhone Xs series, in outdoor advertisements and advertising campaigns, Apple has begun to focus on the changes in the design of new mobile phone physical cameras as one of the few ways to distinguish between the iPhone 11 and the iPhone X.

Sebat predicted last week thatThere will be a strange phenomenon in the future, and the number of cameras on the back of the iPhone will become a social signal." 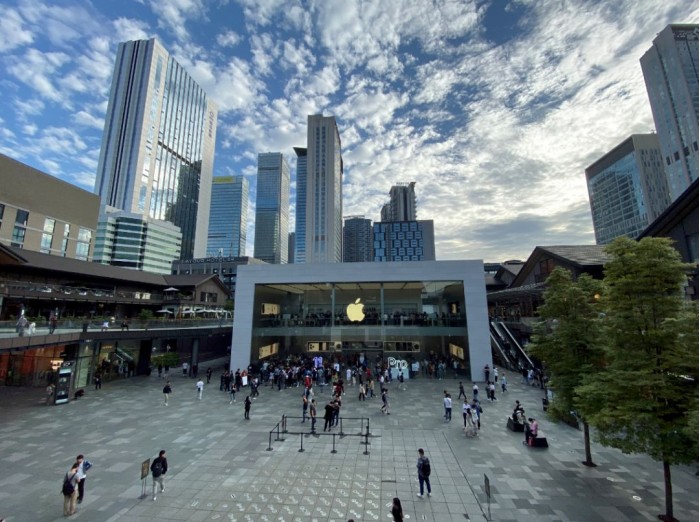 On September 20, Taiguri Apple Store in Chengdu (every photo taken by Zhao Yun)

The first batch of iPhone11 was exposed to severe feve

According to the headline client in Beijing, with the launch of Apple's iPhone 11 series products, the first batch of user experience evaluation of the iPhone 11 has come out. Actual testing shows that the iPhone 11 series is the most wrestling-resistant iPhone in history, but some users say that there are problems such as fever and poor signal when using the mobile phone.

At present, the more concentrated problems include slightly larger heat generation, general signals and some minor problems in the iPhone 11 series, but there are no serious quality control or quality problems.

Many users feedback in the purchase comments. The iPhone 11 series A13 processor has a higher calorific value, including no operation fever, playing games and so on, especially when backup and activation are more serious, and even some users Tucao, they are just like starting a warm hand treasure.

According to the information of Apple's press conference, A13 bionics uses a new generation of 7 nanometer technology of TSMC, which integrates 8.5 billion transistors. The overall performance of A13 is 20% higher than that of previous generation A12. With the same process level and performance improvement, the calorific value is bound to be greater. In addition, the iPhone 11 series is all designed with a double-deck motherboard, and its heat dissipation is not as good as some built-in liquid-cooled Android phones.

As for the problem of signal difference, the iPhone 11 Pro still uses it.Intel Baseband, indeed, is not as stable as Qualcomm baseband. Signals in underground garage and other scenarios do not perform as well as Huawei and other mobile phones, but compared with the iPhone Xs has improved.

In addition, Sogou CEO Wang Xiaochuan complained about Apple on Weibo a few days ago because of his iPhone upgrade to the iOS 13 system, the camera did not work. 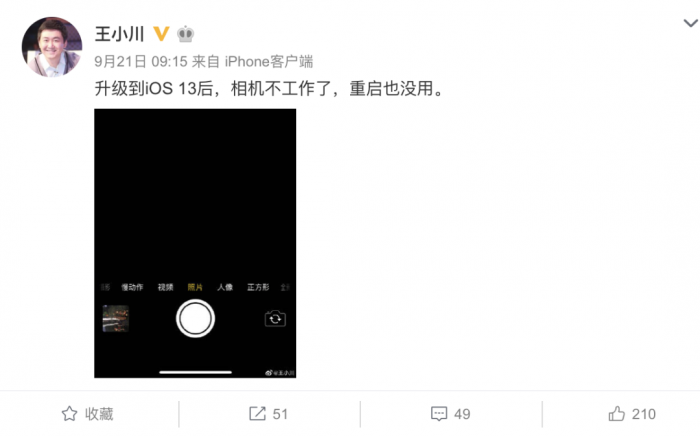 Wang Xiaochuan said that because his iPhone upgraded iOS 13 system, the camera did not work, and restart was useless. At the same time, he also said that similar upgraded cameras can not be used in a few. And there are two other phenomena, one is that the torch can not be used, the other is that the face recognition is broken.

Apple has said it will release the official version of iOS 13.1 on September 24, when they may address user feedback Bug. in the new system

According to Qianjiang Evening News, many digital speculators have already focused on the Mate 30 series issued on September 26.

First of all, we can see the popularity of Huawei Mate 30 from the pre-sale data:

The second important factor is price:

It is understood that domestic prices will be announced on september 26Huawei domestic press conference, each model is expected to be about 2000 yuan cheaper than foreign prices, and on the same day 18:08 in the Huawei mall and online authorized e-commerce platform,Huawei authorized experience store and offline authorized retailers and other official sales.

Guo Mingpi, an analyst at Tianfeng International, said in a previous research paper that the market demand for high-end models of the iPhone 11 in the United States is still strong and its share in the Chinese market is expected to gradually improve. Upgrading the shipment of the iPhone 11 series to 70-75 million units in 2019, the industry chain is expected to grow steadily in the fourth quarter of 2019.

However, Guo Mingpi is still optimistic about the sales of Mate 30 series. He believes that the shipment of Mate 30 series is expected to reach 20 million units. The main reason is that about 70% of Huawei's high-end mobile phone shipments come from the Chinese market, and the lack of Google GMS has limited impact on sales.

Of course, the final sales of the iphone 11 and Huawei mate 30 will depend on consumer choice.