China's basic technology will break the monopoly of foreign countries.

Honor belongs to the king.

This achievement also broke down by American companies.Oracle(Oracle) has a world record of nine years, becoming the first Chinese database product to top the list.

Li Guojie, academician and computer expert of the Chinese Academy of Engineering, praised: 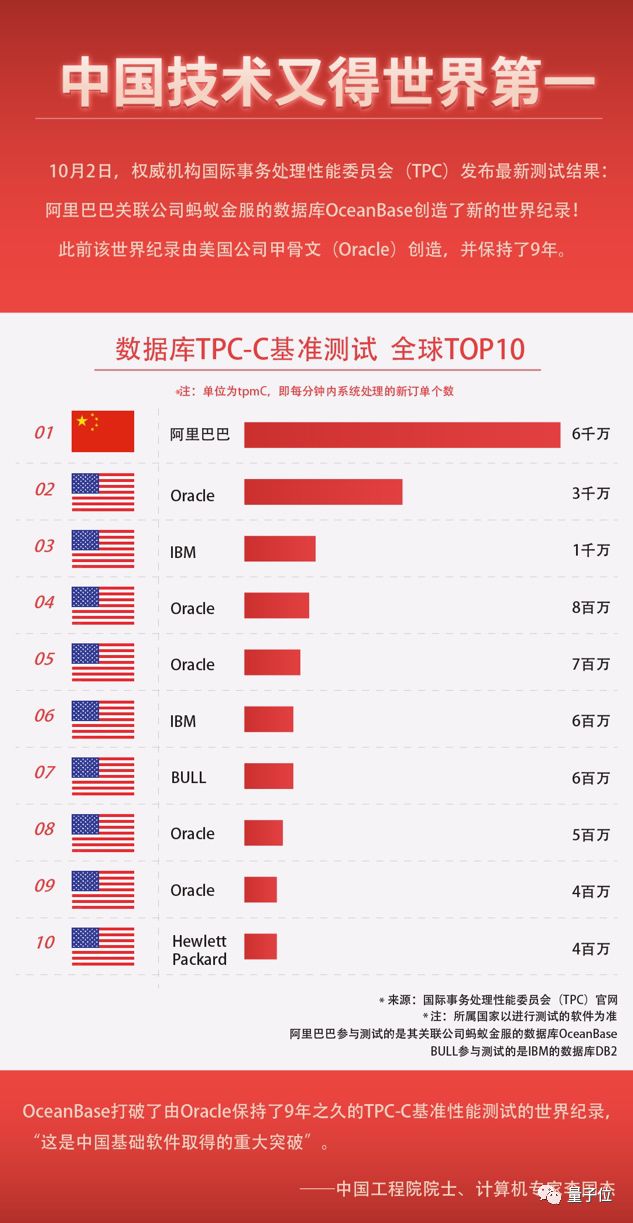 The OceanBase, which is fully developed by Alibaba and ants, is the first distributed relational database used in the financial core business in the world. Its new OLTP world record is more than twice Oracle's best.

Previously, the domestic database market has been dominated by Oracle, IBM and other surgical technology companies for a long time, which not only leads to the high cost of software services, but also has hidden dangers of information security in many key areas. The emergence of Ali and Ant Golden Clothes broke the monopoly.

So what exactly is it?

Be at the top of the authoritative test list 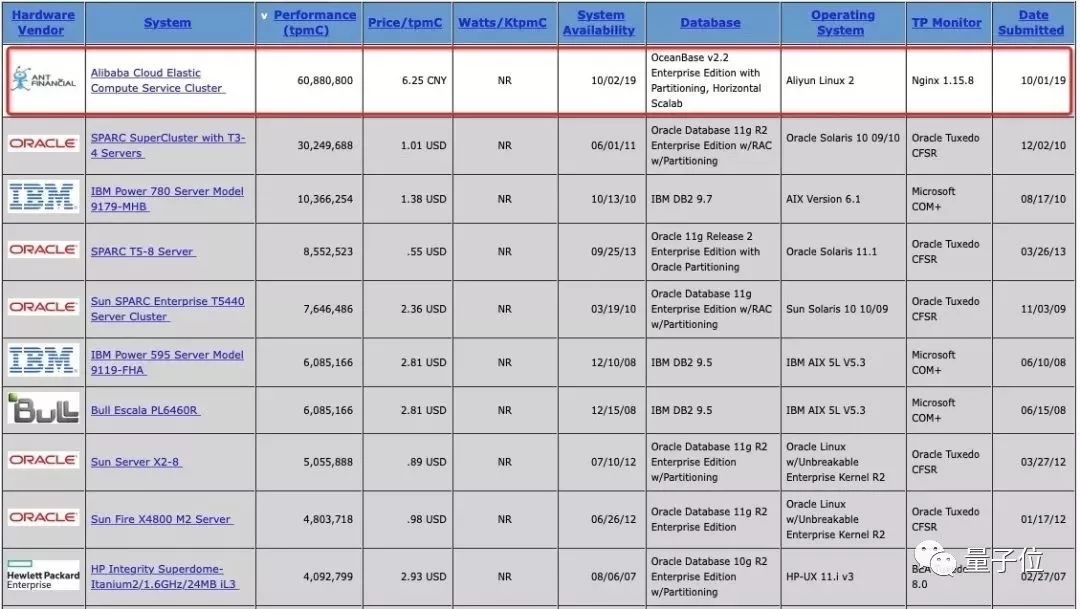 TPC-C performance is measured by the number of new order transactions per minute. The main indicators are the transaction rate (tpmC), and the associated price per transaction ($/ tpmC).

TPC-C standard simulates the classic commodity sales payment scenario for testing, and evaluates the performance and cost-effectiveness of the database by creating new orders per minute. Ocean Base set a new world record for online transaction processing system (OLTP) with 60,880,800 tpmC (the number of new orders processed per minute).

Over the past few decades, TPC-C has been a competitive stage for overseas traditional database manufacturers, and OceanBase is the first large database product to be fully developed by Chinese companies, which is at the top of the TPC-C list.

The Science and Technology Daily commented that:

From Endangering Disbandment to World Leadership

The database has been around for decades since it was born, but basically its market structure has not changed much, and the earliest manufacturers still dominate today.

Because the database is very difficult to replace, it is at the bottom of the whole product or industry chain. The risk of replacement is very high, but the benefits are much smaller. That's why IBM, and other such successors can't take the place of Oracle. This has led to the database has become a very high threshold, strong field, the latter is difficult to live up to. 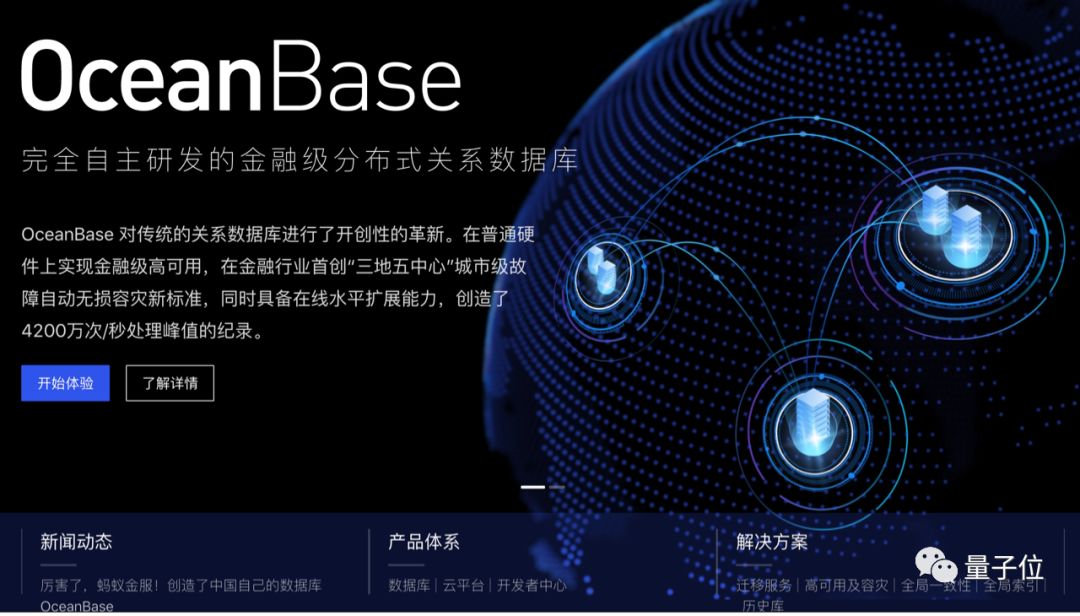 Nevertheless, thousands of sails passed by the side of the sunken boat, and thousands of trees were in front of the sick tree.

At the end of 2012, OceanBase ushered in an opportunity to be reborn, when Ali transferred the team to Alipay.

It belongs to the financial field, and the database challenge will be bigger than other businesses. This is equivalent to giving the OceanBase team a chance to start from scratch.

Alipay started in 2013That is to say, Oracle database, IBM minicomputer and EMC storage are removed.

Especially in recent years, with the rapid development of the Internet in China, some foreign technology companies have not faced a special situation, which has become the key to stimulate the growth of domestic databases.

It is precisely because of these special conditions that China's Internet companies are promoting higher performance and lower cost data storage and processing schemes. Ocean Base, a new generation of database based on cloud computing, emerges as the times require. 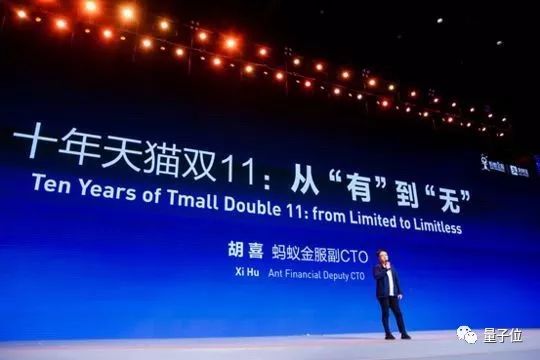 After this test, Ocean Base received more recognition and support. In 2015, the team won the CEO Award of Ant Golden Clothes, which was also the first time that the technical team won the Award.

In the end, OceanBase achieved a comprehensive replacement of oracle bone inscriptions in Ant Financial Services Group, successfully supporting the past five years.

Ocean Base is not only used internally by Ali, but also began to be used externally. Since 2017, OceanBase has landed in dozens of commercial banks, including Bank of China, Zhejiang Commercial Bank, Bank of China, health insurance, etc.

According to Ali's official introduction, OceanBase helped the mutual fund open platform jointly built by the Bank of China to enhance the processing capacity of loan transactions by 10 times. The average daily processing time is less than 1 second.

China's market size and population base provide a huge stage for innovation and technological revolution.

Only if you have the strength can you win respect.

It is worth mentioning that with Ocean Base breaking the monopoly news.

Another story of the past was turned out. In 1997, Oracle founder Larry

China, however, dares not to speak because our database technology relies entirely on oracle bone inscriptions. Almost all of the domestic finance and telecommunications are using Oracle technology.

Fate is under the control of man, and it is natural that it cannot be controlled by man.

With the rapid development of science and technology in China, the old technology companies are proud of China on the one hand, and on the other hand are alert to the rise of Chinese technology.

Elyson has said China is America's biggest competitor. Many years ago, in an interview, he said: 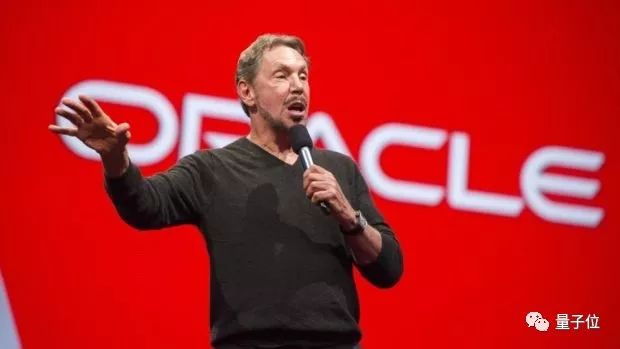 In May this year, Oracle fired 900 Chinese employees for political reasons for the tense relationship between China and Oracle.

Today, Chinese technology companies are already using power to speak back, using landmark technology to fight back, breaking the monopoly of American companies.

In addition, it is gratifying that OceanBase's

Before science and technology innovation was centered on the US and the United States, China followed suit, imitating technology and establishing business models to achieve success.

However, as China's market shows tremendous potential energy, a series of technology giants, such as a series of mature business models, have begun to make new breakthroughs and new progress in the field of basic technology research and development on the basis of big platforms, big data and R & D investment.

In addition to basic database, cloud computing and other fields, artificial intelligence and other frontier research and development, China's speed and accumulation have also become the focus, especially in the Chinese market, with considerable data base and diligent and pragmatic development attitude, which makes people feel confident about the future.

Perhaps there will be no more foreign business CEO to let Chinese partners wait for an hour in the cold wind.

Xiongguan is really like iron, and now step by step.

There should be more cases of OceanBase technology coming from behind, but not without confidence.

Related news
Cinno research: in 2020, the sales volume of intelligent machines in China market will decline by 44.5%
Synergy Research released 2020Q1 China public cloud market report Baidu Intelligent Cloud stable third
UBI research: China becomes the largest buyer of OLED panel for smart phones
Counterpoint Research： Samsung Expands Market Share Gap for Huawei Smartphones
Game UI database, the birthplace of game design inspiration, went online
Counterpoint Research: Apple's 25 percent market share in China in October was its highest ever
Hot news this week
A small plane in the US has crashed into a 30-metre high voltage power line and got stuck: 80,000 people affected
Can recording others' wechat chat records be used as evidence? The Beijing Internet Court has an answer
Alibaba launched a new cross-border e-commerce platform in Spain, aiming to operate independently in the middle and high-end market
It's not just Huawei! Beidou has penetrated more than 20 industries and applied more than 15.5 million products
When pure water is used in China team to solve the problem of seawater hydrogen production: it is expected to become an original industry
A Tesla crashed into two cars in Taizhou, Zhejiang province, killing two and injuring one, police said
The appearance of Xiaomi's mini console is revealed for the first time: an all-metal body with a strong apple smell
Breaking the spell of "Android 3 year must card", the new Breguet mobile phone will be sold for the first time tomorrow: from RMB3499
Be careful with your phone for a long time! The aunt played with her mobile phone so much that her fingers got stuck
Google's Project Zero team accuses vendors of slacking after ARM GPU bug exposes Android upgrade woes
The most popular news this week
Why is the Apple Pencil 2 not supported? iFixit takes apart the iPad 10 to find out
Zte's experience proves that there is no way out of appeasement and peace can only be fought out
China's growing presence in the global high-tech sector is unacceptable to the US
Us to investigate Lapsus$hack, Microsoft, Nvidia and others were breached
From January to October this year, the number of global travel app downloads approached 2 billion, with China's Amap, Baidu Map and Railway 12306 taking the top three places
With the acquisition of Pulse, Mozilla will develop a new approach to machine learning
Did the United States achieve its goal? More than 40 suppliers went to the United States with TSMC
Microsoft may not be able to offer its Microsoft 365 service in German schools after two years of efforts failed
A record $50 million in compensation! In the final judgment of the dispute over the infringement of Minecraft by Mini-World, NetEase won the lawsuit
Manufacturers like Samsung and Xiaomi have been affected. Google has revealed a dangerous flaw that threatens millions of Android devices