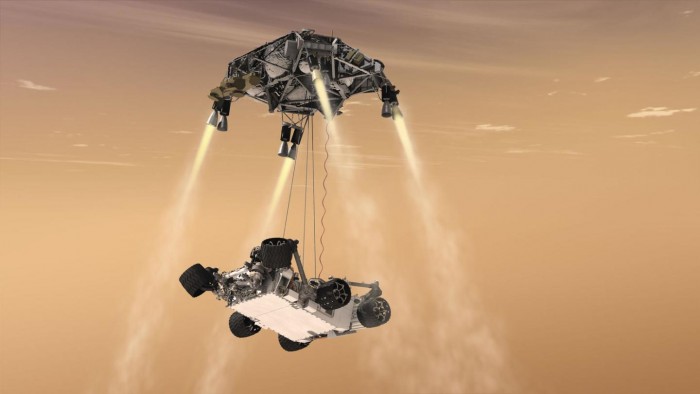 When the Mars 2020 probe enters the Martian atmosphere, a series of complex events will be involved at the last minute before landing, while using 2 more advanced technology than the Curiosity probe.

When the probe reaches the upper atmosphere of Mars at hypersonic speed, it will be protected by aerodynamic insulation plates and shells, which will not only block the heat entering the atmosphere at deceleration, but also provide some lift. When it drops to supersonic speed, the parachute system will slow it down.

After the spacecraft dropped its cruiser and insulation at an altitude of 1 mile (1.6 km), the lander would fly at a speed of 170 mph (274km / h). At this time, the detector and its connected downcomer are detached from the shell in the state of free fall.

Shortly afterwards, eight reverse rockets on the descent platform will ignite. Not only will it slow down and land safely, but it will also be able to use its terrain relative navigation (TRN) system to find a safe landing site and move toward it -- the first time such technology has been used to land on Mars.

When the ship is at an altitude of 66 feet (20 meters), it drops at 1.7 miles per hour (2.7 kilometers per hour). At this point, Sky Crane began to appear. The explosion bolt detonates and the rover is separated from the landing platform.

After the separation, the four rocket engines were shut down. When the lander wheels touched the ground, the rope was cut off by more pyrotechnics and the descent platform flew at least 492 feet (150 meters) away from the landing site. 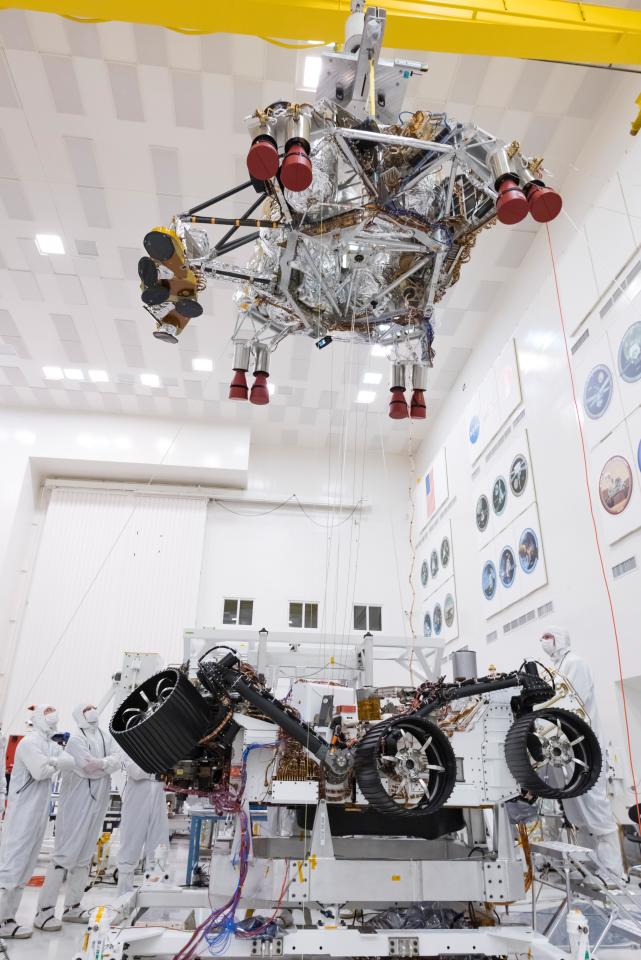 NASA said that once the JPL hardware and computer tests were completed, the detector and descending platform would be sent to Cape Canaveral Air Force Base in CHO and paired with the ULA Atlas V launch scheduled for launch in July 2020.

Related news
NASA begins to fuel the nuclear power plant of the Mars 2020 Mars
What is the Mars 2020 Mars Rover? Go to the NASA assembly room and have a look.
NASA installs new landing sensor components for Mars 2020 rover to improve safety
NASA Engineers Install Sample Cache System on Mars 2020
NASA completes separation of Mars 2020 landing platform
NASA Mars 2020 probe completes the first "stand up"
NASA's'Moon to Mars'project may face huge changes
NASA is finally going to unveil the official name of Mars 2020
Hot news this week
Samsung and research team found a new semiconductor material: amorphous boron nitride (a-bn)
What does Huawei mean to Chinese semiconductor?
Attack Tencent hinterland byte jump start long video Secret War
The Facebook Regulatory Committee, which came into operation this fall, could overturn Zuckerberg's decision
Amd releases driver update for radon 20.7.1 to introduce new error reporting tool
Oxford University expert: the new coronavirus has been sleeping all over the world, not originated in China
Microsoft stops win10 update in May: for users using storage pool function
"Shandong Xiaomi Finance" lost Lu Weibing praise legal team: recently very powerful
Successful development of new coronal vaccine in the United States? The subjects said they had antibodies: they were vaccinated two months ago
Training time is expected to be shortened to a few minutes! TSMC or will produce Cerebras "super" AI chips
The most popular news this week
Amazon ordered tiktok to be banned for seconds: hand skating?
The light of domestic products! BYD's customized version of Huawei P40 released
Galaxy S21 internal code, hardware details exposure price configuration may both decrease
A device called LG K31 is exposed: or will it be released in the next few weeks
Asian media say Samsung Galaxy Note 20 may actually be cheaper than expected
HMD plans to launch Nokia 2.4, also known as wolverine, equipped with eight core Helio P22 processor
ROG game mobile phone 3 is certified :6000 mAh battery with 30 W fast charge
has submitted a submission to the US side! Can TSMC and Qualcomm resume supply to Huawei?
"Reprisals" by the United States against France in the digital tax dispute, Expert: limited impact
Raise the price as much as you can! NVIDIA RTX 20 series production stopped