Under the impact of Huawei Kirin 990, Qualcomm Paragon 865 was released in November.

IT Home October 9 Digital chat Station revealed that under the impact of Huawei's latest flagship chip Kirin 990 series, Qualcomm's Cellon 865 chip is likely to be released ahead of schedule in November, including Samsung, OPPO,vivo, Xiaomi and other head manufacturers will also show off the sample-based Snapdragon 865 Snapdragon X55 baseband high-performance 5G phone. 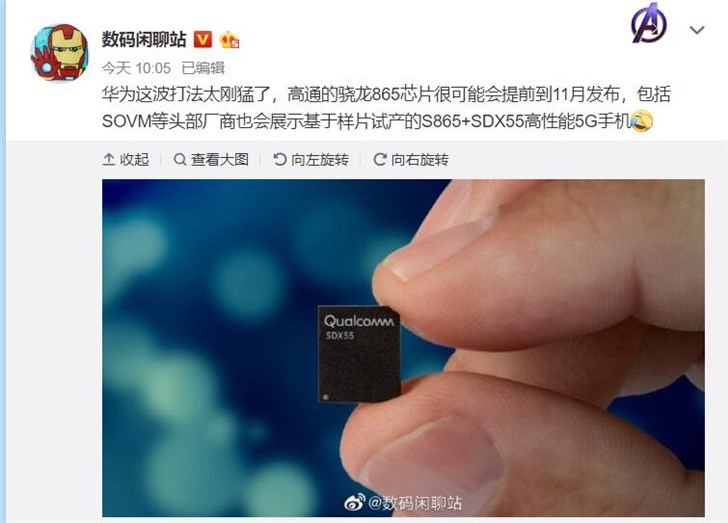 At present, there are two solutions to support 5G in the market. Huawei Baron 5000 and Qualcomm X50/X55. Qualcomm said that 5G mobile phones integrated with the base band of Mulcomm X55 would be launched on a large scale in early 2020. But now, Qualcomm has obviously accelerated the speed of entering the market of Mulcomm X55.

Huawei Mate30 Series 5G model will be on sale in November. For the existing MX 50 baseband 5G mobile phone, the impact is inevitable. The news that Huawei and Apple will officially launch processors based on 5nm process in the third quarter of next year is not good news for Qualcomm.

At present, the release of the MYL 865 processor in November is ahead of schedule. For the 5G mobile phone manufacturer of Qualcomm, at the same time, the consumers who have already started MYL 855 series 5G mobile phones will not have much comment. Of course, publishing is one thing, commercial is another thing, in general, buy early and enjoy early.