After the release of the V8 version of Antu Rabbit, the running score of each model has increased to a certain extent (not the performance improvement), so the cost-effective ratio has also improved. However, due to the changes in the scoring system, the performance-to-price ratio of V8 version and V7 version can not be compared. 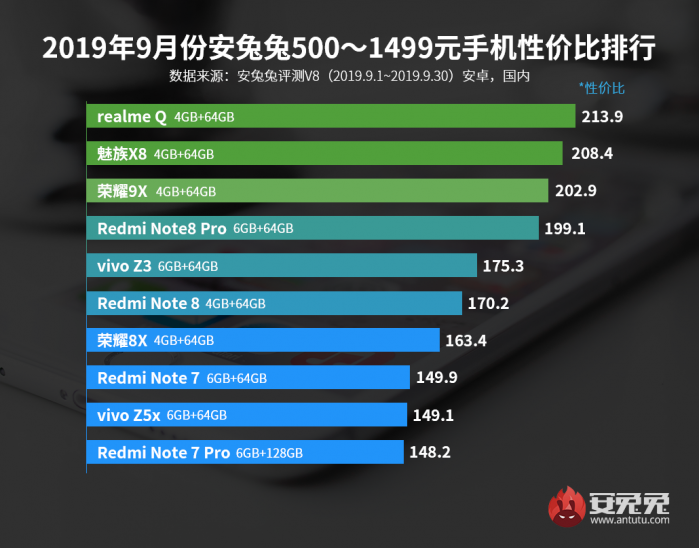 Realme released a new 1000-yuan machine called "Four-camera Raptor" in early September. It is equipped with Qualcomm 712 chip, all standard UFS 2.1 flash memory, 48 million pixels (Sony IMX 586), 4035 mAh battery and VOOC 20W flash charge. The starting price of this configuration is only 998 yuan, which directly pushed the Meizu X8 out of the list last month and occupied the first place in the price list. One.

From this point of view, 48 megapixels basically came to the 1000 yuan machine, the next function or screen fingerprint recognition?

Meizu X8 belongs to an older model, but better than the price reduction promotion, 899 yuan can buy a good-looking phone carrying Cellong 710, which is also very cost-effective. In terms of configuration, the machine is a good model designed by Meizu with a special-shaped screen, which provides a front-facing 20 million pixel camera and a rear 12 million 5 million pixel dual camera, with a battery capacity of 3210 mAh.

In addition, according to official news, the Meizu X8 will be updated by Flyme 8 in December, when the fluency will be further improved.

The third is Glory 9X, which has the greatest advantage of carrying Kirin 810 chip. It has the performance of exceeding grade in the same price. From the ranking, it can be seen that Glory 9X is the highest running model with a score of 283891. It can not be denied that its performance is excellent. In other configurations, Glory 9X uses a 6.59-inch display screen, and uses a lift-and-drop proactive scheme to further increase the screen proportion.

Even so, Glory 9X is still a bit inadequate, that is, 10W charging, but in the face of high performance and price, that's not much to say. 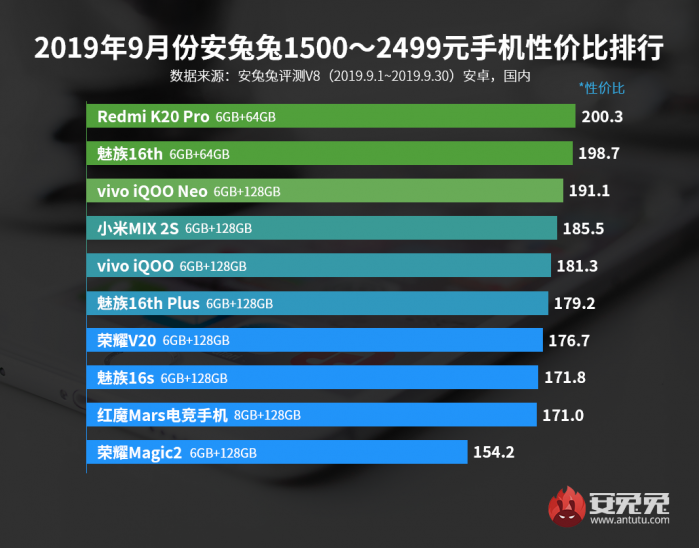 AsRed riceThe first real flagship mobile phone, K20 Pro naturally follows the concept of the best performance-price ratio of red rice. With the passing of the sales cycle, the machine began to reduce its price. At present, the price of the machine is 2099 yuan on the page of Jingdong, but it usually has 100 yuan coupon, that is, 1999 yuan.

In terms of configuration, the Redmi K20 Pro uses 6.39 inch anhydrous drop without bangs full screen, carries Snapdragon 855 chip, rear 48 million 13 million 8 million pixel three photos, battery capacity 4000 mAh, supports 27W wired fast charging. This price can buy a flagship plane that is not out of date, which can be said to be worth it.

Last month, the Meizu 16th was in the third place. This month, with a price reduction of 100 yuan, it rose to the second place. After all, the truth fragrance theorem is still very useful in front of the price. Meizu 16th has a full-scale screen design without Liu Hai pole created by Huangzhang. This design should be deeply loved by Huangzhang, so in subsequent models, it basically continues this appearance.

Configured, the Meizu 16th carries a Cellon 845 chip, which provides a front-facing 20 million pixel camera and a rear 12 million 20 million pixel dual camera, with a battery capacity of 3010 mAh, which may be a slight shortage of the machine, but its feel and design make up for it.

Vivo iQOO Neo is a special model, which was released in July this year. The reason why it is special is that it carries Gaotong 845 chip, a flagship chip of last year, and a price of less than 2,000 yuan, which will inevitably affect the sales of old flagships that have not finished inventory last year. 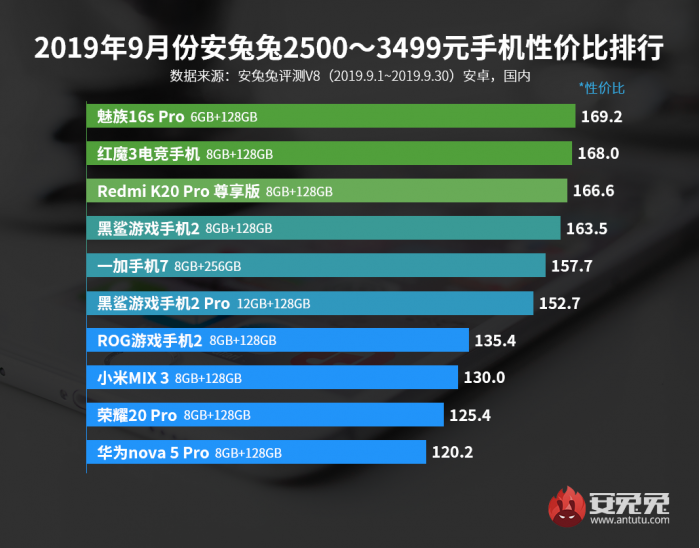 16S Pro is Meizu's latest flagship aircraft. Compared with 16s, it has a performance improvement. It has been upgraded from 555 to 855 Plus chip. The appearance of 16S Pro is to continue to use 6.2 inch full-scale polar edge screen and COF packaging technology. The chin is controlled at 4.2 mm, with 91.53% of the screen.

In terms of configuration, Meizu 16S Pro carries Gaotong Luan855 Plus chip, equipped with UFS 3.0 flash memory, the opening speed of APP is 40% faster than 16s, the system fluency is 30% higher, and the latest OneMind 3.5 support. Officials say that the comprehensive performance of 16S Pro has been improved by 40%.

From this we can see how much Huang carpenters like the 16 series of shapes. Of course, Meizu has a steady strength in handle and shape design, but the continuous doll will make users easily aesthetic fatigue. As for when to break the 16 series of shapes, it may be necessary to wait until the mobile phone enters a new form.

In addition, the screen refresh rate of Red Devil 3 competitive mobile phone is 90 Hz, which can be said to be a game artifact at this price.

In late September, Red Rice renewed its flagship mobile phone K20 Pro, mainly upgraded its configuration. The chip was upgraded to 555 Plus, which has higher GPU frequency and stronger performance than that of 555. The price is set at 2699 yuan, which can be said to be very conscientious. 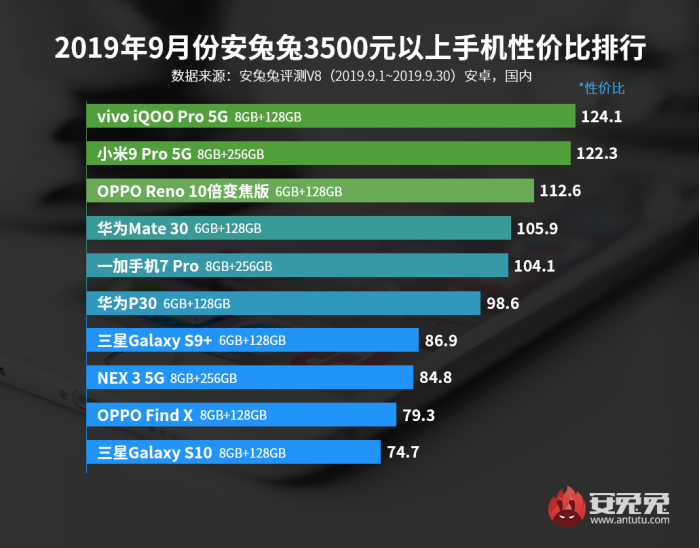 At this time point, domestic mobile phone manufacturers have basically taken out their own 5G flagship. Compared with last month's list, 5G mobile phones appeared in September, such as vivo iQOO Pro 5G, which ranked first in price. Once sold, it became the cheapest 5G mobile phone at that time.

On the configuration, the, iQOO Pro 5G uses 6.41 inch Super AMOLED water drop screen, carries Cellon 855 Plus mobile platform, supplemented by UFS 3.0 flash memory, battery capacity 4500mAh, supports 44W fast charging, provides front-facing 12 million pixel front-facing camera and 48 million 13 million 2 million camera, although the configuration is not very bright, but the machine does not have a lot of slot points, coupled with support for 5G network, it can really be called true fragrance.

The second is Xiaomi 9 Pro 5G, which is the second 5G mobile phone of Xiaomi's flagship. It is more competitive in selling price. It is equipped with the high-pass Teflon 855Plus chip, and the XL VC liquid cooling module is customized. The heat dissipation area is 1127 mm. Oempty VC liquid-cooled 5-layer graphite high-heat-conductivity copper foil heat-conducting gel three-dimensional heat-dissipation system. The core temperature of the CPU is reduced by 10.2 ℃. It is called "VC liquid-cooled 5G core" and provides a 12GB RAM 512GB ROM with a battery capacity of 4000 mAh.

The only pity is that the machine is not equipped with UFS 3.0 flash memory, but Xiaomi 9 Pro 5G has a triple fast charge, 40W wired fast charge (48 minutes full of 4000mAh) 30W wireless fast charge (69 minutes full) 10W reverse charging, which makes up for the defect.

The biggest highlight of the machine is the camera, which uses the "connecting rod" to achieve 16-160mm "full focus coverage", while meeting the requirements of 10 times hybrid optical zoom, ultra wide angle, portrait, etc.4KVideo recording and other omni-directional image creation needs, support 10 times hybrid optical zoom, 60 times digital zoom, users who like to take photos should be considered.

Above is the ranking of this month's Antu Rabbit Performance-to-Price Ratio List, you can choose according to your own needs.

Finally, we can predict the future Android mobile phone performance-to-price list, we can see that 5G phones have already appeared in the flagship aircraft. I believe that in the next few months, 5G phones will go below 3000 yuan, and more phones will enter the ranks of real fragrance.