Who is the future king of cloud computing in China?

Aliyun has started to lay out cloud computing as early as 2009, which has a pioneering advantage. According to statistics, 40% of China's top 500 enterprises, nearly half of China's listed companies and 80% of China's technology companies are customers of Aliyun. Based on Tencent's strong position in games, videos, social networking, travel and other businesses, Tencent Yun has been catching up all the way, and its market share has been expanding. This paper will make a comprehensive comparison from five aspects: strategic layout, market share, business income, technical ability and product cost performance.

Tencent Cloud entered the market later than Aliyun. It has more layout in games, social networking, video and other fields. It is different from Aliyun's playing method. Tencent Cloud chose to build moats in different fields, and then dig deep into vertical track users. 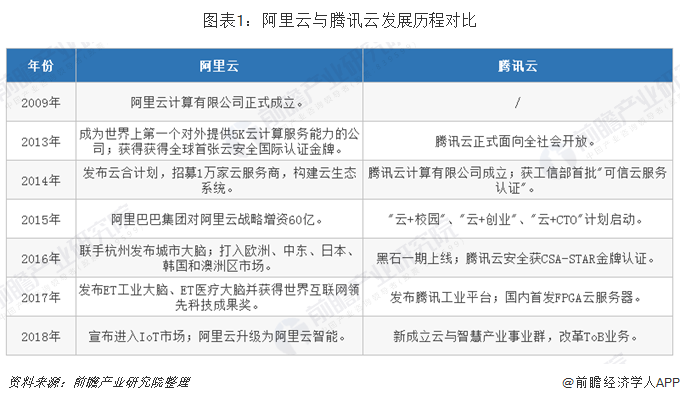 Aliyun's positioning is the enabler of small and medium-sized enterprises. Therefore, Aliyun focuses on the basic equipment of the business society and the Internet of Things world, hoping that cloud services can benefit small and medium-sized enterprises and government departments around the world. In addition, out of thinking about the application prospects of cloud services, Aliyun focuses on three strategic industries: new retail, new finance and digital government.

Tencent Cloud's positioning is an inter-industry linker. Tencent Cloud is based on QQ, WeChat, Tencent games and other massive business technology training, from infrastructure to fine operation, from platform strength to ecological capacity building, Tencent Cloud integrated it and face the market, so that it can provide enterprises and entrepreneurs with cloud computing, cloud data, cloud operation in one of the cloud service experience. Ma Huateng mentioned in public: 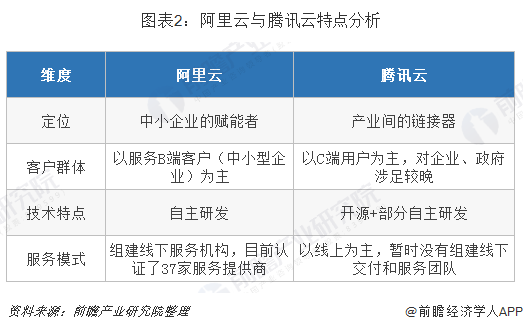 From the perspective of global infrastructure layout, Aliyun and Tencent have great enthusiasm for entering the international market and expanding overseas cloud business, both of which are equally well matched. At present, Aliyun operates 56 usable areas in 19 geographical areas around the world; Tencent has opened 25 geographical areas and operated 53 usable areas. 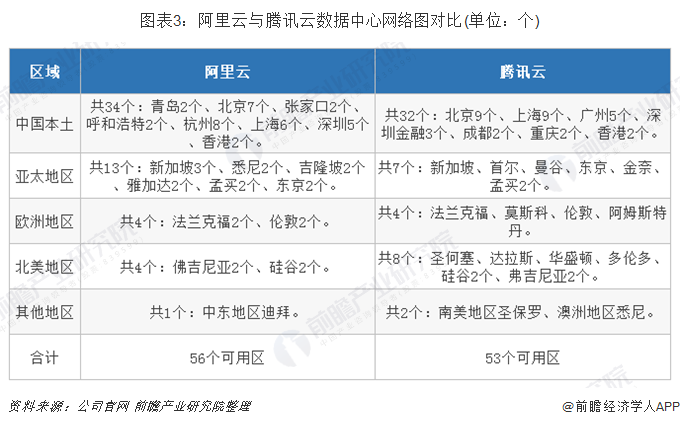 According to reports issued by IDC over the past years, the market share of Aliyun reached 43.2% in the first quarter of 2019, ranking first in the Chinese market and leaving behind domestic competitors. IDC's data report on China's public cloud market has been ranked first in China's market for three years since 2015. But Tencent cloud development momentum can not be underestimated, according to IDC statistics, in the top 10 cloud service providers in 2015, there is no Tencent cloud figure. Tencent has been catching up all the way in recent years. Its market share accounted for 12.2% in the first quarter of 2019, and its growth rate is astonishing. 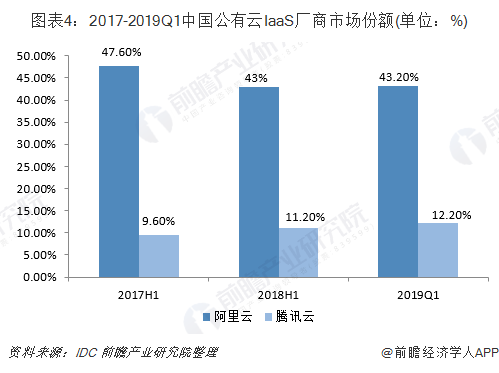 Over the past year, Aliyun has expanded China's market leadership to overseas markets. At present, Aliyun has the largest cloud computing infrastructure in Asia-Pacific, and has established regional nodes such as Singapore, Australia, Malaysia, Indonesia, India and Japan. According to Gartner's global IT service market report for 2018, Aliyun ranks first in the Asia-Pacific market in cloud computing infrastructure, with a market share of 19.6% in 2018, surpassing Amazon AWS (11.0%) and Microsoft Azure (8.0%) combined. Not only in 2018, Aliyun's market share in the Asia-Pacific region was 14.9%, AWS 11.2% and Azure 7% in 2017. That is to say, Aliyun has been ranked first in the Asia-Pacific region for two years.

Tencent Cloud, with a 5.4% share, surpassed Google's 4.3% share for the first time in 2018, ranking fourth. From the perspective of cloud computing infrastructure, Tencent cloud still lags behind Aliyun. However, it is worth mentioning that Tencent Cloud's growth rate in IaaS (Infrastructure as a Service) and IUS (Infrastructure and Utilities Services) in 2018 reached 128%, and its overall market share rose from 18 in 2017 to 6 in 2018, ranking first in the world. 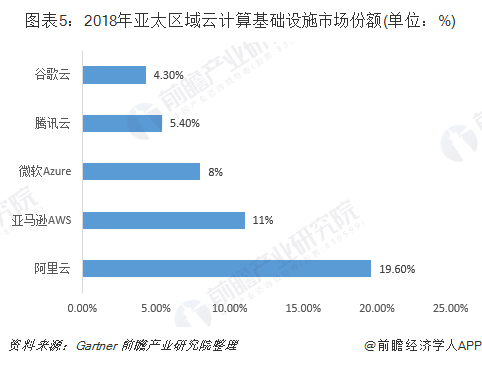 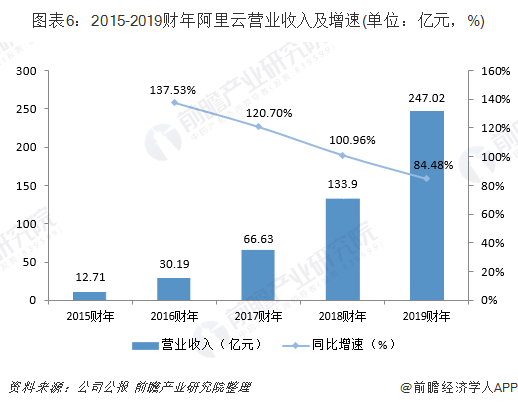 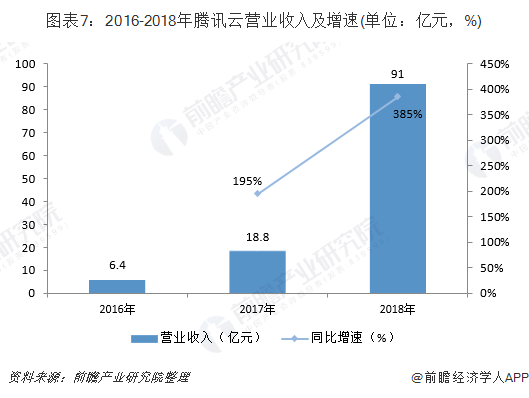 Overall, Aliyun and Tencent's business revenue has been growing at a high speed for many years, but the latest financial reports show that the gap between the two is still large, and Aliyun's overwhelming revenue of 24.7 billion occupies an absolute advantage.

Cloud service is an industry that pays equal attention to both assets and technology, especially technology. For users, stable and powerful use experience is the most critical. Next, this paper compares Aliyun and Tencent cloud from the basic capabilities of six cloud service providers: flexible computing, database, storage, artificial intelligence (big data), CDN service and domain name service. Generally speaking, Aliyun has good stability and strong AI technology, and Tencent has strong scenario ability, but it has a little difficulty in technology research and development. Details are shown in the table below. 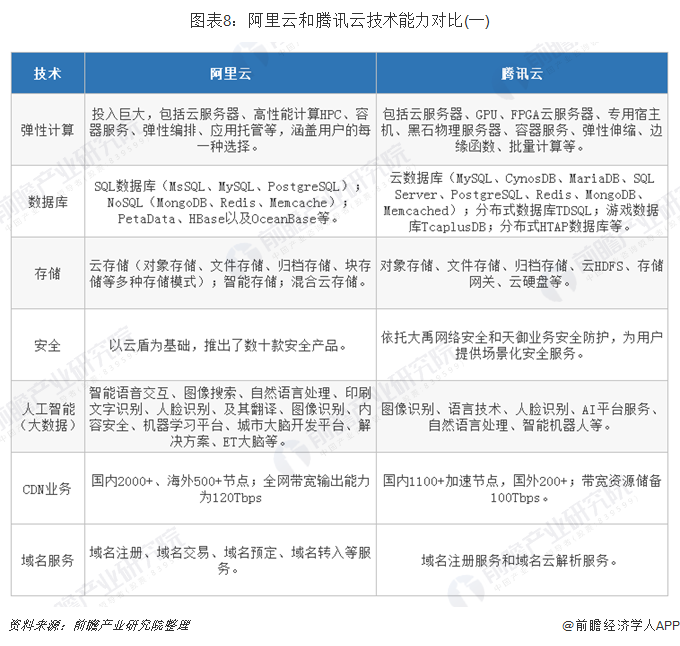 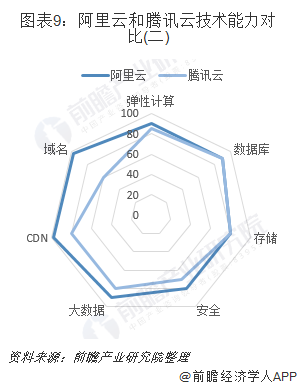 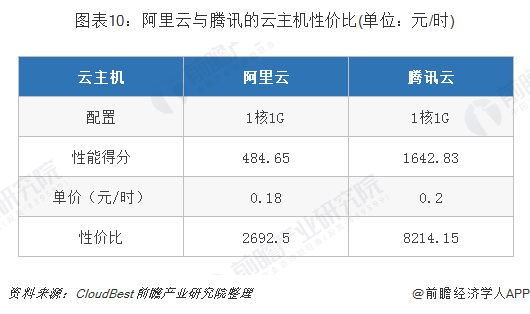 Note: The time range of evaluation is from December 2018 to May 2019, in which cost performance = performance score / unit price.

Forward-looking point of view: Ariyun is from China

Aliyun began to lay out the cloud computing field in 2009. It has a first-mover advantage. Its market share and business income are much higher than Tencent's. In addition, Aliyun's independent R&D model and To B business process are also ahead of Tencent cloud. But Tencent itself is the market leader in games, videos, social networking, travel and other businesses, and has a strong position, so Tencent cloud solutions in these areas have strong competitiveness.

The Goldman Sachs study points out that the market penetration of cloud computing will break through 10% for the first time in 2019, reaching 11.3%. Research shows that once the permeability of a technology exceeds 10%, it will enter the stage of accelerated growth. There is no doubt that the incremental market of cloud services will enter a higher growth stage, and there will be more variables.

To sum up, Ariyun is currently from China.