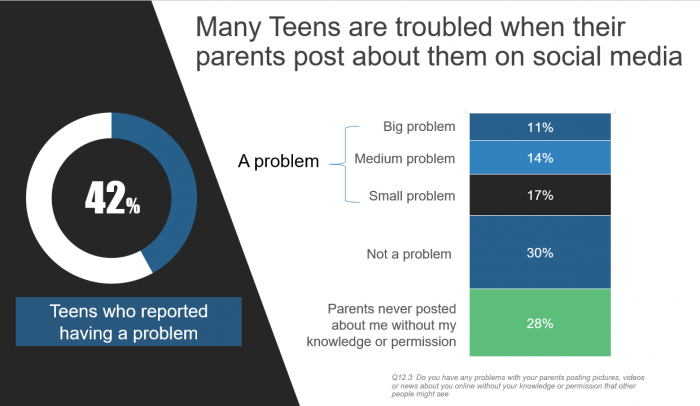 These findings come fromMicrosoftThe latest research on digital civilization--encouraging all people to engage in a safer, healthier, and more polite, online interaction. In a study called Mobility, Safety and Direction Online-2019, Microsoft conducted a survey of 21 different network risks for adults aged 13-17 and adults aged 18-74. Similar surveys have been conducted in 2016 and 2018. This year, a total of 12,520 people participated in the survey. The full results of the survey will be announced on February 11, next year, the International Internet Security Day.

What is the relationship between "sharing" and network risk?

While microsoft's research does not explore any direct link between parents'online behavior and the potential risks to young people, academic researchers and financial experts have warned that such sharing can potentially threaten children's online privacy and safety.

Sharing or not sharing is a family decision, but parents should exercise discretion when choosing to share, rather than unintentionally revealing too much about the child's real full name, age, date of birth, family address, favorite sports team, pet's name and photo, etc. On the one hand, these fragments of personal identity information may be abused in social networking projects, making children and other adolescents the target of network fraud or identity theft, and even in some extreme cases may lead to network abduction.

So whether online or offline," careful sharing "should be a rule for everyone to remember.

Teenagers continue to seek help from their parents

In 2019, teenagers continued to turn to their parents and other trusted adults for help on the Internet, consistent with last year's survey. Nearly half (48 percent) of the teenagers surveyed this year said they had reflected their concerns about online activity to their parents. This is another 6 percentage points higher than in 2018. Just two years ago, less than 10 percent of teenagers said they had sought online risk help from adults.

In addition, when asked about the best example of cyber civilization and respect behavior, adolescents overwhelmingly pointed to their parents (80%), followed by teachers (49%), and other adults, athletes and celebrities were 22%, 17% and 15%, respectively.

In this regard, Microsoft encourages adults to become familiar with and participate appropriately in young people's online activities, to accept and discuss their online life openly, to listen to and pause for judgement when young people come into contact with online problems, and to agree on any action plan together.

Three new countries have joined the study in 2019

Related news
Microsoft Build Conference: Windows Retreat, Microsoft Rebirth
The Netherlands calls for the discontinuation of Microsoft Office Online and mobile applications
Microsoft: Teenagers think parents share too much information online
Microsoft Microsoft 365 Creative Upgrade: Multilingual Writing So Easy
Hot news this week
Samsung and research team found a new semiconductor material: amorphous boron nitride (a-bn)
What does Huawei mean to Chinese semiconductor?
Attack Tencent hinterland byte jump start long video Secret War
The Facebook Regulatory Committee, which came into operation this fall, could overturn Zuckerberg's decision
Amd releases driver update for radon 20.7.1 to introduce new error reporting tool
Oxford University expert: the new coronavirus has been sleeping all over the world, not originated in China
Microsoft stops win10 update in May: for users using storage pool function
Huawei: 5g hardware not affected by White House sanctions can be supplied to the UK in the next five years
Successful development of new coronal vaccine in the United States? The subjects said they had antibodies: they were vaccinated two months ago
"Shandong Xiaomi Finance" lost Lu Weibing praise legal team: recently very powerful
The most popular news this week
Amazon ordered tiktok to be banned for seconds: hand skating?
The light of domestic products! BYD's customized version of Huawei P40 released
Galaxy S21 internal code, hardware details exposure price configuration may both decrease
A device called LG K31 is exposed: or will it be released in the next few weeks
Asian media say Samsung Galaxy Note 20 may actually be cheaper than expected
HMD plans to launch Nokia 2.4, also known as wolverine, equipped with eight core Helio P22 processor
ROG game mobile phone 3 is certified :6000 mAh battery with 30 W fast charge
has submitted a submission to the US side! Can TSMC and Qualcomm resume supply to Huawei?
"Reprisals" by the United States against France in the digital tax dispute, Expert: limited impact
Raise the price as much as you can! NVIDIA RTX 20 series production stopped