Is the Ali database really better than Oracle?

But Lei Feng found that there was a lack of information in the process of communication. It is undeniable that Ali Ocean Base's efforts, but we should also correctly view the test itself. By synthesizing multiple messages, Lei Feng hopes to present the original appearance of the test and the significance of the test.

What is the TPC-C benchmark?

TPC (transaction processing performancecouncil), known as the transaction performance Committee, is responsible for defining things such as TPC-C,TPC-H

Records are dusty for nine years, not because they can't break through.

Lei Feng learned from the database industry that the preparation of the TPC-C benchmark test takes at least six months. Ali also disclosed in the subsequent information that the Ocean Base team spent more than one year in preparation. Only two of the three official auditors in the world participated in the test audit.

And in the past nine years, not just Oracle, other database vendors have not selected to refresh the list, just because Oracle's performance has been leading the other nine years? Price/ performance is a factor that has to be raised.

How much tangible or intangible returns can be generated by breaking through this test is a practical issue that manufacturers need to consider. From the media supersize point out that in the TPC-C official list of more than 370 lines, only ant Jinfu test results are white background, other companies because they are all grey background. The list reads: "All grey background test results are overdue due due to software and hardware upgrades."

According to the industry, Oracle may also feel that the pure brush list is of little significance, and it takes time and effort to prepare the test itself. The results of the nine-year test also show that it is difficult to overturn the Oracle from a hard index. The test results show that the performance of the Ali database can reach a certain value, but it is not appropriate to misrepresent it as a game.

Despite the list, Ocean Base is also the first tier.

So, is it necessary for OceanBase to refresh the list? Lei Feng net thinks it is still necessary. In the past, the industry has been discussing when the domestic database can cross the mountain of Oracle, but now we have at least seen the mountain road. 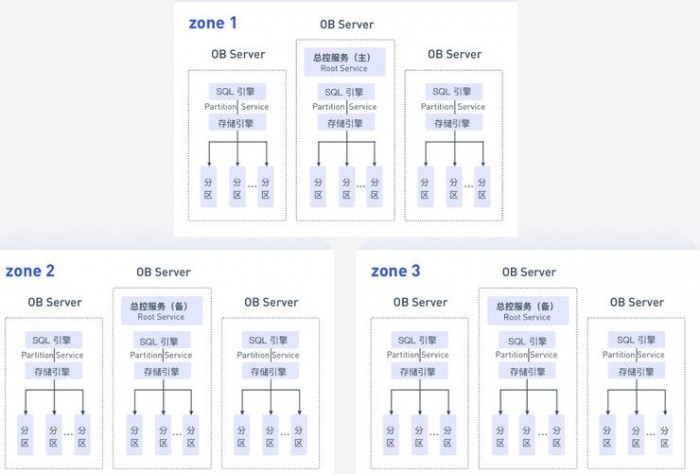 Alipay also used Oracle database before its research. Ali went to the IOE tide. In 2016, OceanBase replaced the Oracle database in Alipay's core accounting system. OceanBase realized the user data received by the front desk under the process of OLTP online transaction processing, and it could immediately be transmitted to the computing center for processing and processing results in a short time.

Ocean Base and POARDB also have some competition within Ali, but they are all working for the next generation of databases in general. OceanBase achieves high availability of financial level on ordinary servers, supports "three places and five centers" city-level Fault Automatic Non-destructive disaster tolerance, and has the ability of online horizontal expansion.

From the practical point of view, the servers and storage used in the test may not be the real user scenarios, such as full flicker and flicker, servers using old products directly, Oracle's test results are also optimized, Ali Ocean Base's results are enough to meet the performance requirements of most scenarios, and the important thing is that the price is low. For example, in the oceanbase test, the hardware cost only accounts for about 18% of the overall cost, only considering the cost performance of the hardware is significantly better than the centralized database.

In this regard, Ali may not have expected the development of the situation, will be in the direction of "China's self-research database to break the Western monopoly", Ali insiders also said to Lei Feng that the internal test results did not respond too much.

Earlier, industry experts told Leifeng. com (public number: Leifeng. com) that the cloud native database market may erupt in the next two or three years. The growth rate of the public cloud market has slowed down, and the original cloud database is more in line with the market demand. At present, the technological monopoly of foreign database manufacturers has been gradually broken, and the rising momentum of domestic database is expected to further develop.

The database market is about to start the second half of the competition. Cloud vendors are the new variables affecting this battle. It is a long process to match with Oracle and achieve Oracle, which is not realistic at present. How to use the understanding of database market, or the advantage of database technology, to impress the market customers worth 2-4 billion yuan, is a real problem for database manufacturers.

The positioning of Alibaba and Oracle database is different. The advantage of OceanBase is that it adopts distributed architecture, with lower hardware cost, better availability and linear expansion. However, the performance of OceanBase stand-alone is quite different from Oracle and DB2. Therefore, it is required to focus on optimizing the performance of stand-alone storage.

In addition, OceanBase is positioned to support both OLTP and OLAP services in the same engine. At present, OceanBase's OLAP processing capability is not as good as Oracle's. In the follow-up, we need to strengthen the storage module's processing capability for large queries, and support OLAP operators to be pushed down to the storage layer or even to do OLAP computation directly on compressed data.

Related news
Oracle cuts off the flash storage department and lays off at least 300 people!
Is the Ali database really better than Oracle?
Amazon completely removes Oracle Database: migration completed
Thinking behind AWS abandoning Oracle
The death of commercial database: Oracle facing difficulties
Oracle Wu Chengyang: Oracle is a cloud player
Hot news this week
A small plane in the US has crashed into a 30-metre high voltage power line and got stuck: 80,000 people affected
Can recording others' wechat chat records be used as evidence? The Beijing Internet Court has an answer
Alibaba launched a new cross-border e-commerce platform in Spain, aiming to operate independently in the middle and high-end market
It's not just Huawei! Beidou has penetrated more than 20 industries and applied more than 15.5 million products
When pure water is used in China team to solve the problem of seawater hydrogen production: it is expected to become an original industry
A Tesla crashed into two cars in Taizhou, Zhejiang province, killing two and injuring one, police said
The appearance of Xiaomi's mini console is revealed for the first time: an all-metal body with a strong apple smell
Breaking the spell of "Android 3 year must card", the new Breguet mobile phone will be sold for the first time tomorrow: from RMB3499
Be careful with your phone for a long time! The aunt played with her mobile phone so much that her fingers got stuck
Google's Project Zero team accuses vendors of slacking after ARM GPU bug exposes Android upgrade woes
The most popular news this week
Why is the Apple Pencil 2 not supported? iFixit takes apart the iPad 10 to find out
Zte's experience proves that there is no way out of appeasement and peace can only be fought out
China's growing presence in the global high-tech sector is unacceptable to the US
Us to investigate Lapsus$hack, Microsoft, Nvidia and others were breached
From January to October this year, the number of global travel app downloads approached 2 billion, with China's Amap, Baidu Map and Railway 12306 taking the top three places
With the acquisition of Pulse, Mozilla will develop a new approach to machine learning
Did the United States achieve its goal? More than 40 suppliers went to the United States with TSMC
Microsoft may not be able to offer its Microsoft 365 service in German schools after two years of efforts failed
A record $50 million in compensation! In the final judgment of the dispute over the infringement of Minecraft by Mini-World, NetEase won the lawsuit
Manufacturers like Samsung and Xiaomi have been affected. Google has revealed a dangerous flaw that threatens millions of Android devices