The operating system is designed to run on any components and devices that can be easily found. Simplicity and reproducibility are two major features of Collapse OS. It needs to run on the smallest and simplest machine. It can edit text files through simple interfaces, compile source files for MCUs and CPUs, and read and write from various storage devices. In addition, while Collapse OS has the ability to replicate itself, the goal is to be as independent as possible. With a copy of the project, capable and creative people should be able to build and install operating systems on machines they design without external resources (i.e. the Internet). 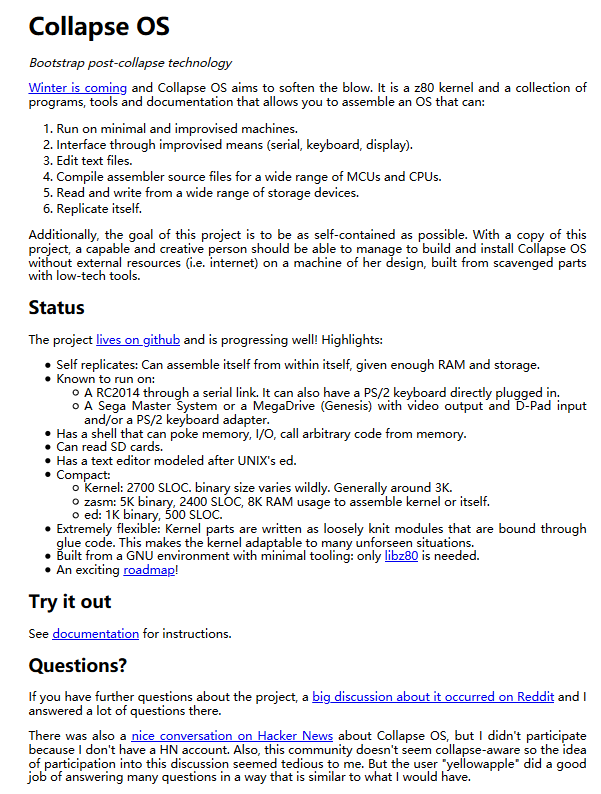 Dupras believes that the biggest problem for post-apocalypse technicians will be microcontrollers, the microcomputer embedded on the circuit board that controls the function of the computer system. Collapse OS wrote: "in a few decades, the computer will crash, it will not be repaired, and people will no longer be able to program microcontrollers. To avoid this fate, we need a system that can be designed through existing parts and microcontrollers. "

So Dupras decided to adopt a Z80 8-bit microprocessor for Collapse OS. heexplainZ80 has 9,000 transistors, which is obviously easier to replicate on a large scale than any modern CPU with millions of transistors, so it's better to design a system that works well on simpler chips.

The idea of Collapse OS has sparked a lot of discussion on sites such as Reddit and Hacker News. Dupras talked on Reddit about another reason for choosing Z80. "it has been produced for a long time and has been used on many machines, so people have a good chance of trying to use it."

Collapse OS can currently run on Z80-based homemade software RC2014. The development of the operating system is still ongoing, and Dupras has done a lot of software archaeological work for it. Of course, "The Age of Great Collapse" and so forth are his personal ideas, which may sound the same as building Noah's ark for the end of the world. Dupras himself knows that Collapse OS is not viable enough. He claims that the project is meaningful only in the case of a suitable collapse, too weak to work, too serious to work. But he insisted on the collapse hypothesis and said that even if it turned out to be futile, it would be interesting to try.