Google announced a new plan to expand the campus to accommodate 25,000 employees at its second headquarters in San Jose. 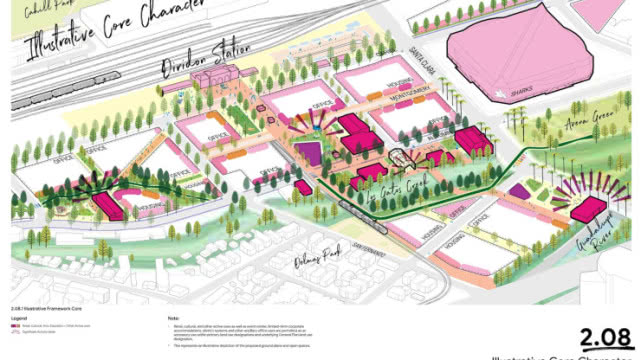 The formal application comes at a critical moment when Google needs more space for its rapidly growing workforce, and its existing Mountain View headquarters and surrounding offices have become overcrowded.

Google also faces pressure from local voters who fear that its growth will further exacerbate supply constraints in the local real estate market, which is one of the most expensive in the United States.

Google expects the new park to accommodate up to 25,000 employees, which has aroused strong opposition from community members who fear more displacement. Some residents protested at the company's annual shareholder meeting in July, even after the company announced a $1 billion housing commitment across the San Francisco Bay area.

This week, Google bought 16 hectares of land in Gilroy, Calif., and said it would plant trees and flowers for its park. The company also said the San Jose project would include about 6 hectares of parks and green spaces. In addition to offices and parks, the company also plans to launch retail.

The project will also include a large intermodal transport centre, the mayor of San Jose, Sam

Google has also been trying to free the city from building height restrictions so that it can expand upwards rather than outwards, which will be different from the traditional Silicon Valley architecture. The company is still soliciting community feedback and will conduct an environmental impact assessment before submitting the proposal to the City Council for final approval next year. (Tencent Technology Revision/Jinlu)

Related news
How does Google recruit talent?
Google bought Yahoo's headquarters for $1 billion
Hot news this week
Wechat has not done this function for N years! Use this app to make up for the defects of wechat
2020 wechat Dragon Boat Festival travel big data: the number of wechat payments increased by 43% year on year, and the post-90s most like to travel
Gree's response to "being disqualified from winning the bid": a mistake made by the bidder in sorting out the materials
Microsoft official free data recovery tool windows file recovery experience
NASA's face touching Necklace: vibration warning to prevent the spread of new coronavirus
IPhone 12: it's more like throwing away the charger
Apple wants to know: what do you do with the charging head of the old iPhone?
Amazon cancels disposable plastic products in India
How long can "Laoganma" carry on after winning Tencent?
Tencent magic change Yang surpasses video self mockery: I'm a simple and honest fake spicy sauce lost 16 million
The most popular news this week
The severity of the epidemic in the United States is greatly underestimated, or the actual number of infected people is 10 to 24 times higher than the existing data
China's Tesla owners humble Rights: fully automatic driving nearly killed! The muck truck merged the line, and even accelerated to hit it
HP spectre folio experience: leather and limited, trying to get rid of homogeneous laptops
"Operation Wizard" has pushed 5.9 monthly fee members, 88vip and Jingdong plus members have something to say
Microsoft's new windows Preview: push new fluent start menu
TSMC 5nm was snatched by Huawei and apple this year
India's telecommunications minister said it had decided to move Huawei out of the country's 5g network construction plan
Huawei mobile phone new patent exposure: camera equipped with "SLR Lens"
5000mAh large battery and 65W super fast charging! These phones help you get rid of charging anxiety
Source: Samsung Galaxy note20 or series is the most expensive