Samsung QD-The first step of the plan is to transform its L8 LCD substrate factory in tangjong, South Korea, into a qd-oled substrate production site. Starting from the first quarter of 2021, monthly production capacity is expected to reach 30,000.

In the long run, Samsung will transform all its eight generation LCD production facilities into qd-oled, increasing its monthly production capacity to 100000, so as to improve the competitiveness of qd-oled.

It is reported that QD-OLED technology is expected to simplify and reduce the OLED-based scheme.televisionAnd display production costs to achieve a wider gamut.

As a contrast,Display's modern WOLED panel, which uses a OLED emitter stack based on blue or white (yellow and blue), uses a WRGB color filter system at the top, and there are various additional layers between them, after and before. 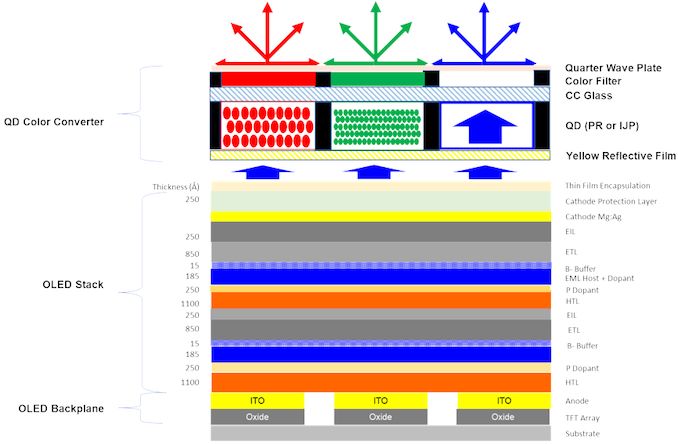 In contrast, the QD-OLED panel uses a OLED emitter stack with a quantum dot RGB color filter (QDCC) system at the top.

In addition, the current OLED panel is up to 22 layers, while the qd-oled panel is expected to be reduced to 13 layers. This means fewer deposition stages, lower materials, production costs, and higher yield.

However, Samsung must solve the optical management problem until then, so the popularity of QD-OLED technology still faces great challenges.

Related news
Return to the OLED TV battlefield? Samsung or restart large-size OLED investment
The size of the OLED screen must be eaten by Samsung? I don't know if LGD will panic.
Why is the OLED screen all over the mobile phone and the display almost invisible?
OLED is behind! Samsung's new qd-oled panel will be launched next year
Better than OLED! Samsung Strong QD-OLED Development
The father of LCD switch to OLED! Where does sharp go
Samsung will produce large OLED panel with quantum dot technology: beyond existing OLED Technology
Hot news this week
Wechat has not done this function for N years! Use this app to make up for the defects of wechat
Gree's response to "being disqualified from winning the bid": a mistake made by the bidder in sorting out the materials
Microsoft official free data recovery tool windows file recovery experience
NASA's face touching Necklace: vibration warning to prevent the spread of new coronavirus
IPhone 12: it's more like throwing away the charger
Apple wants to know: what do you do with the charging head of the old iPhone?
Amazon cancels disposable plastic products in India
How long can "Laoganma" carry on after winning Tencent?
Tencent magic change Yang surpasses video self mockery: I'm a simple and honest fake spicy sauce lost 16 million
Windows file recovery tool on Microsoft Store
The most popular news this week
Linus Torvalds, father of Linux: I didn't program for a long time. My job is to say no
Android version of the Firefox browser to remove the preview version to solve the confusion of the version number
The severity of the epidemic in the United States is greatly underestimated, or the actual number of infected people is 10 to 24 times higher than the existing data
China's Tesla owners humble Rights: fully automatic driving nearly killed! The muck truck merged the line, and even accelerated to hit it
HP spectre folio experience: leather and limited, trying to get rid of homogeneous laptops
"Operation Wizard" has pushed 5.9 monthly fee members, 88vip and Jingdong plus members have something to say
Microsoft's new windows Preview: push new fluent start menu
TSMC 5nm was snatched by Huawei and apple this year
India's telecommunications minister said it had decided to move Huawei out of the country's 5g network construction plan
Huawei mobile phone new patent exposure: camera equipped with "SLR Lens"