Huawei hopes to build VR / Ar into the next smartphone industry 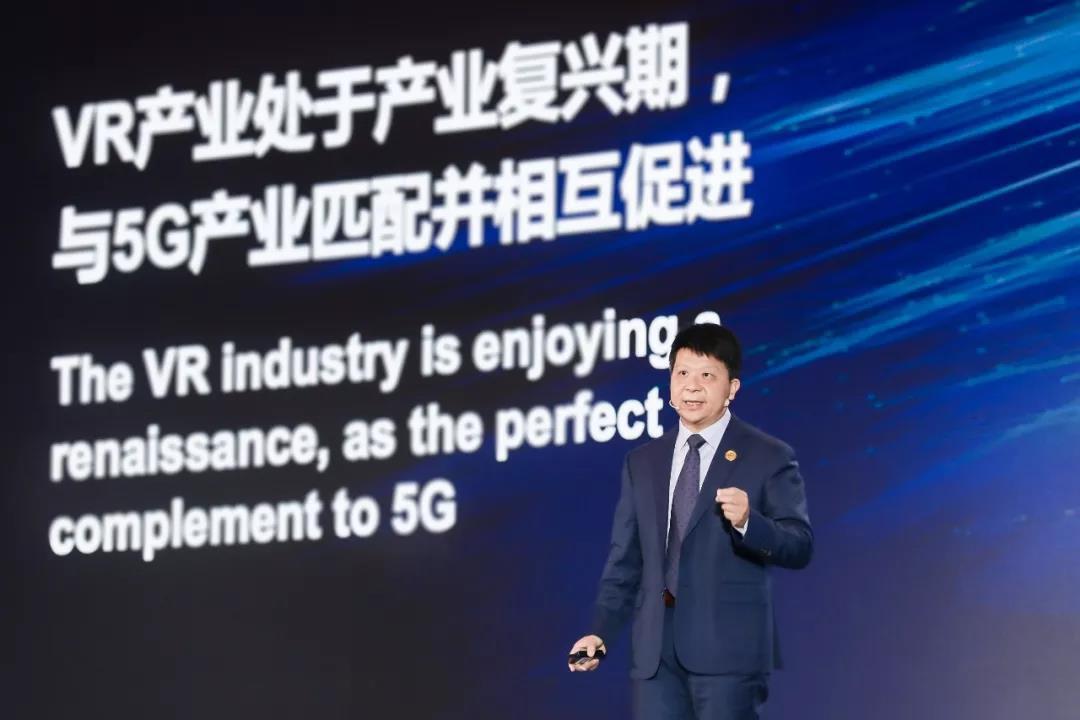 Guo Ping also said that VR / AR is a revolution in human-computer interaction and a revolutionary upgrade in computing power, connectivity and display.

At present, Huawei hopes to build a good VR / AR highway, from terminal engine, pipeline to cloud computing, to support the prosperity of the whole industry, and to build VR / Ar into the next smartphone industry.

The following is the full text of the speech:

Dear guests and friends, good morning. It's my pleasure to attend the world VR industry conference.

Over the past two decades, the Internet has brought about a change in our lives. If we compare the system of the internet to the information highway, a variety of vehicles running on the road, the telecom operator is the operator of the highway, and the Huawei is one of the main builders of the global information highway. We're in the 5G era, with our neighbor's 5G commercial 69-day break through 1 million users, with VR users accounting for 45%. VR/ AR will be the first 5G applications, and Huawei wants to work with industry partners to build VR/ AR

VR / AR is the revolution of human-computer interaction experience 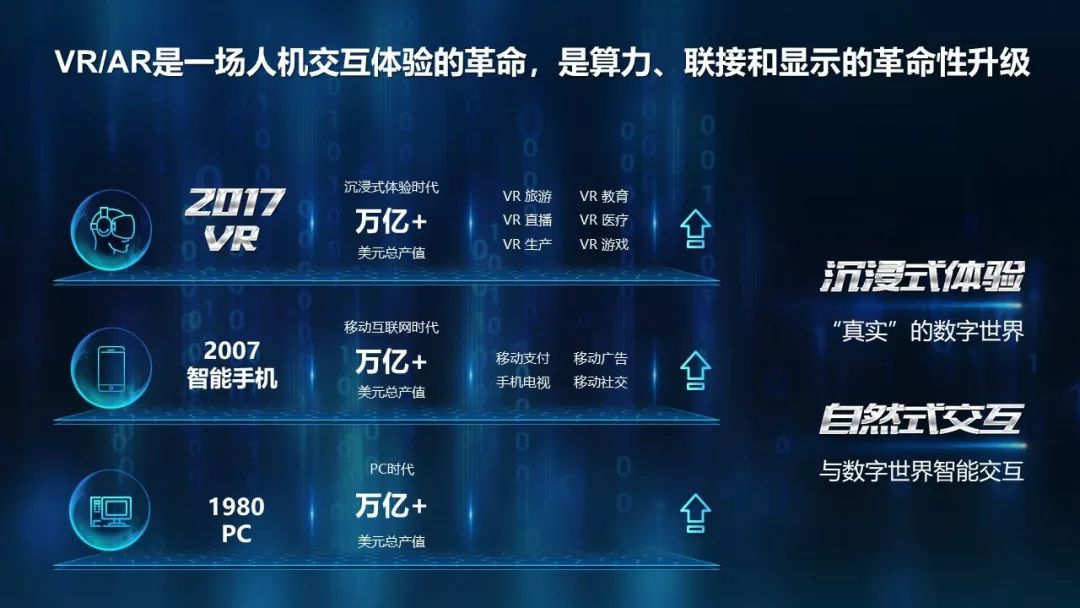 VR / AR is the next generation of experience revolution and computing platform, the advanced integration of digital world and physical world, and the revolutionary upgrade of computing power, connection and display. VR / AR will open the era of immersive experience, break through the limit of plane vision experience, enter the stage of three-dimensional space experience and introduce more sensory dimensions including touch.

VR industry is in the period of industrial rejuvenation

Match and promote with 5g industry 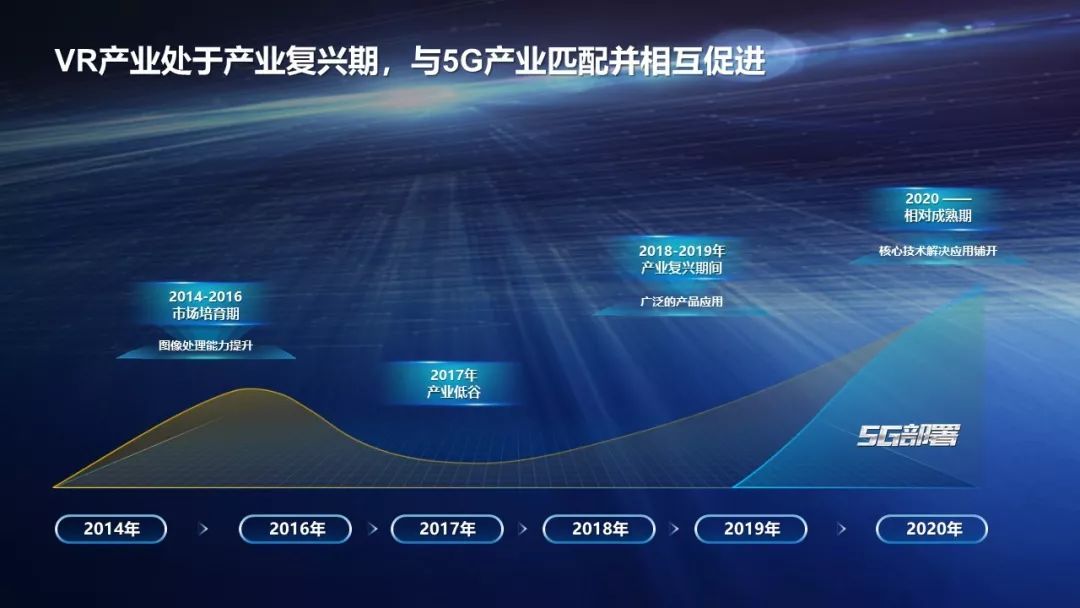 After experiencing the peak of industrial speculation, the VR industry fell to a low point in 2017. now, the innovation of VR terminal products and the commercial deployment of 5G are driving it out of the industrial trough. 2019 is the recovery period of the industry.

5g and VR are highly matched in industrial rhythm. The practice of a South Korean operator shows that the coincidence of 5g and VR reaches 45%. VR puts forward higher requirements for mobile networks, while 5g with large bandwidth and low delay makes VR possible in mobile scenes. Telecom operators are about to start 5g scale construction, and the two will promote each other. 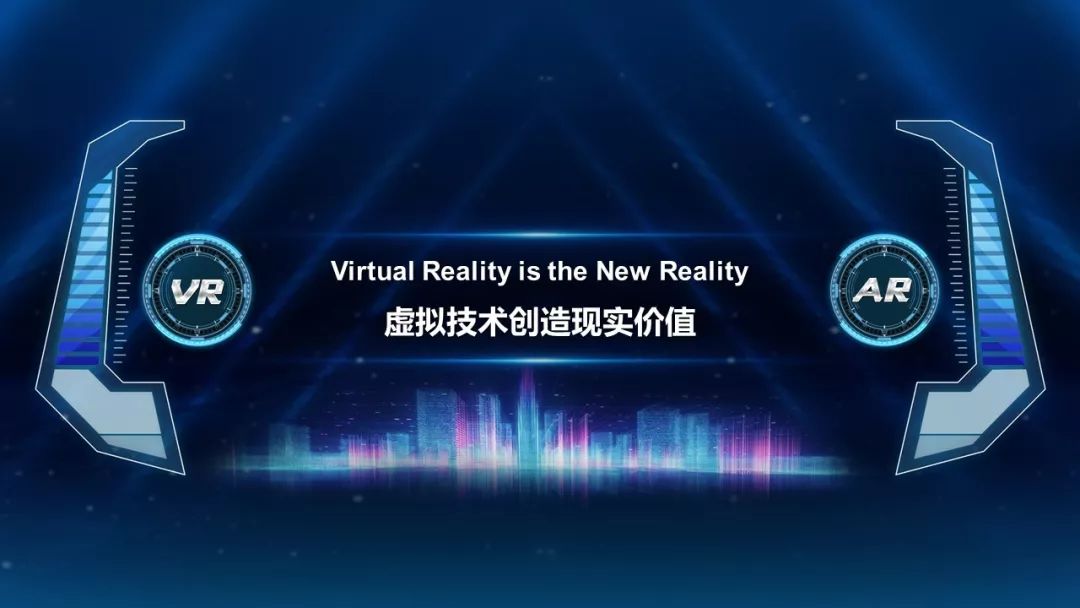 Virtual reality is the new reality.

Most of the future ornamental content does not have to be present in person, and the interactive experience will be gradually replaced by VR/AR.

VR enters the experience with 5G 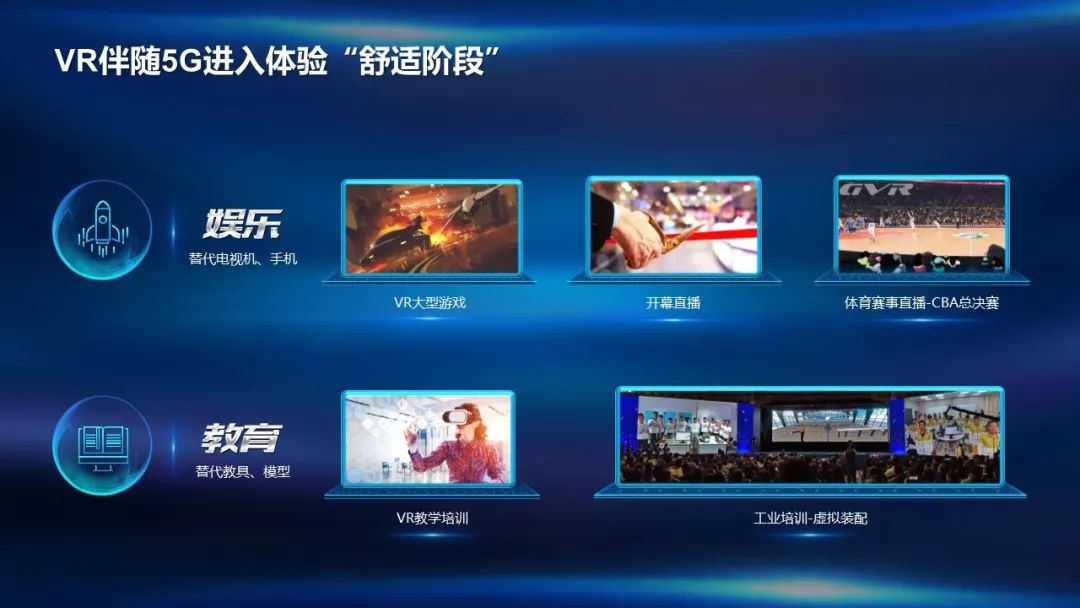 The VR experience is entering

VR education is becoming more and more popular. With VR, students in remote villages can learn the geographical features of Australia in a short distance by wearing glasses. They can also travel through the human body to learn the transmission of blood in the human body. This kind of experience greatly improves learning interest and is gradually applied to engineering training and other fields.

AR is a big business 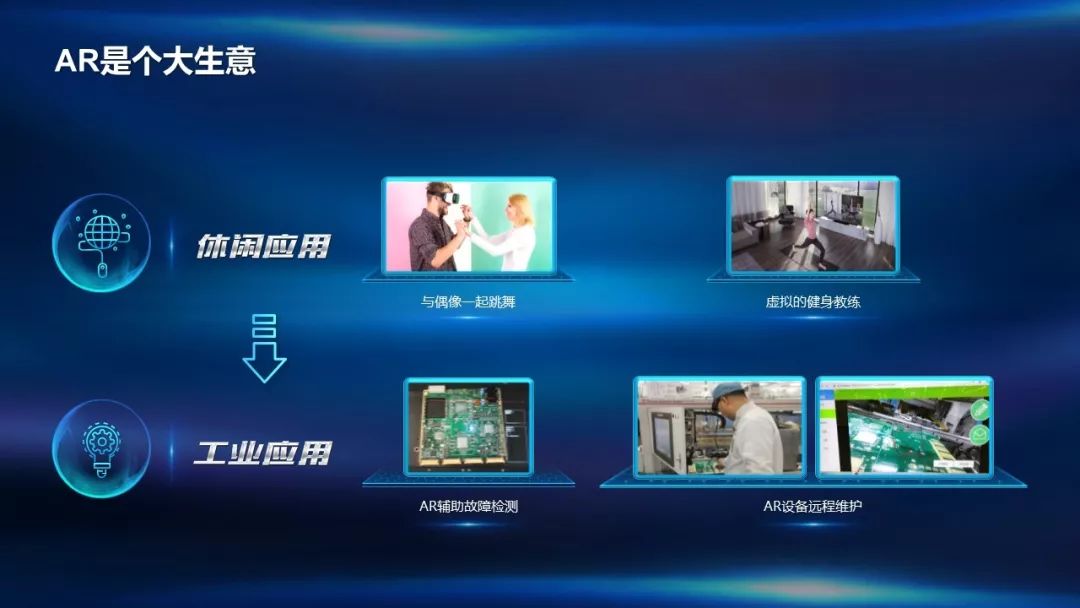 ar is a bigger business than VR. After a few years.

The imagination space of AR application is huge, some foreign operators even use AR to train shop assistants how to deal with robbery, and use virtual reality to let employees learn how to deal with emergencies. 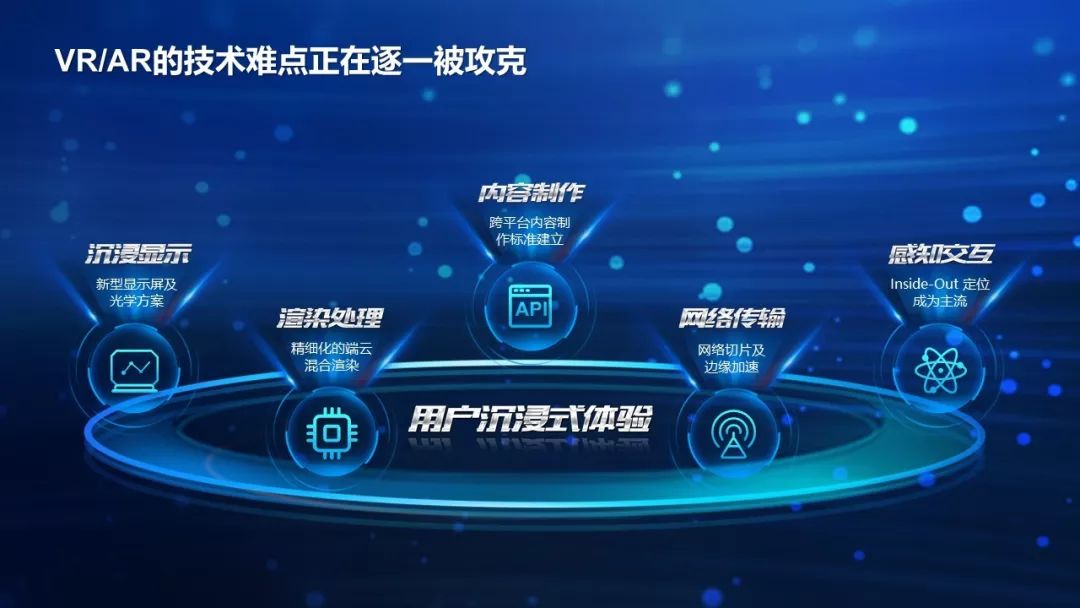 VR is not a new technology in itself, said Negroponte, a famous professor at MIT. He has been focusing on VR, in recent years since 1969, and it is technological advances in other adjacent areas that have brought VR/AR into the attention of the general public.

VR / AR covers five related technical fields, from display to content. These difficulties are being overcome one by one.

For example, in the field of immersive display, plane display to 4K/8K stage has approached the visual limit, VR/AR drives the accelerated innovation of new display screen and optical module.

In the field of network transmission, to meet the low delay experience of VR / AR transmission, network slicing and edge computing, chip transmission technology has become a hot spot of innovation. 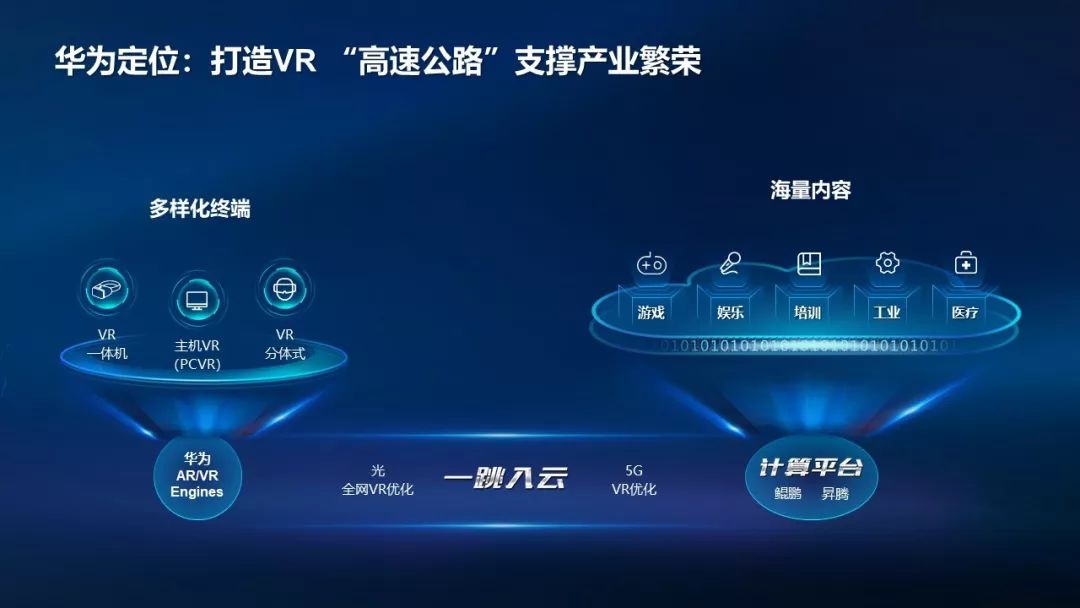 As a technology supplier, Huawei's positioning is to break through various technical difficulties, build a good VR highway, from terminal engine, pipeline, to cloud computing, and support the prosperity of the whole industry. 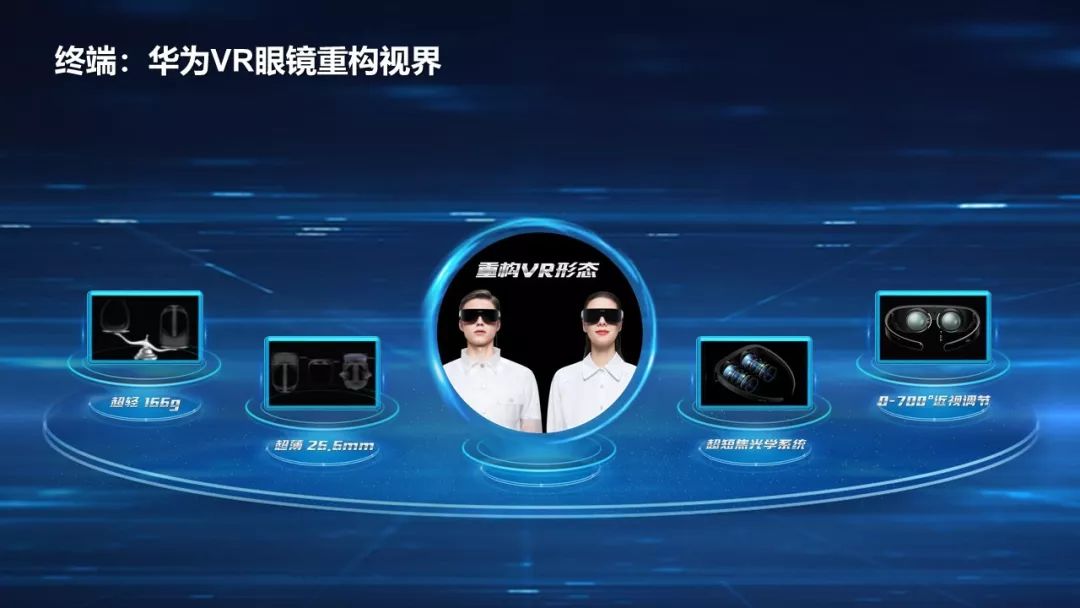 As you know, young people are less and less watching TV now. They spend more time on mobile phones, but the experience of large screen is not satisfied by mobile phones. VR will replace the large screen and give people a personalized immersive space.

In the future, VR/AR terminals will gradually introduce more voice, gesture and other interactive methods to further liberate our hands. The lighter, thinner and cooler Huawei VR Glass will lead the way.

VR / AR occupies people's eyes and enhances audio-visual senses, which may be the last hard screen used by human beings. 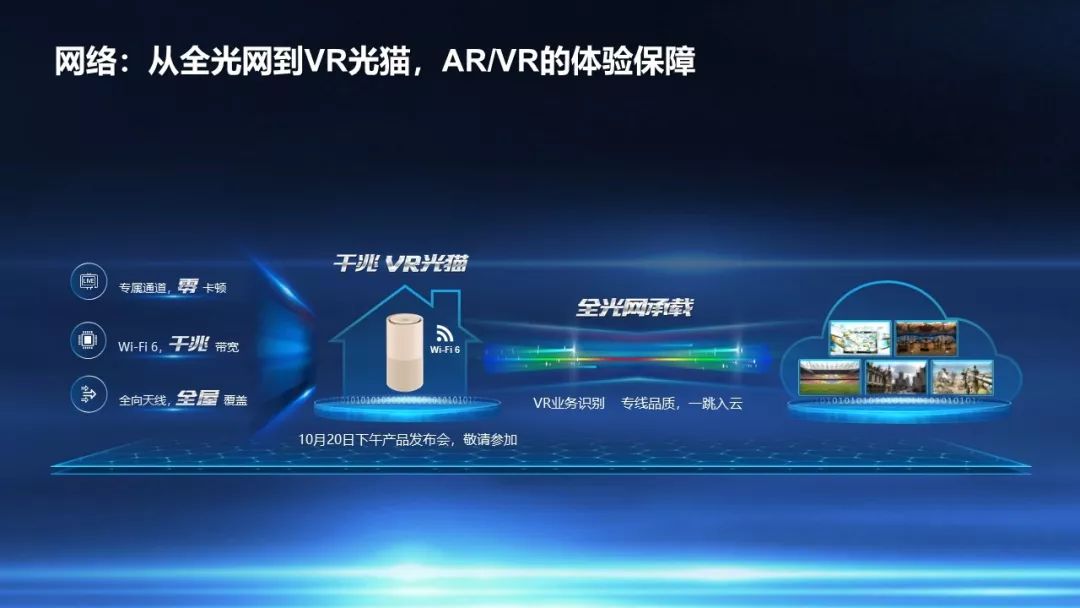 AR/VR service puts forward new requirements for the network: the network speed should be fast, can not lose data. To this end, Huawei has built an all-optical network solution architecture to ensure.

The problem of home network is the most prominent. We are assisting operators to solve the last 1m experience guarantee. Huawei has also designed a new optical cat, which can identify users using VR services and provide targeted Gigabit bandwidth guarantee. 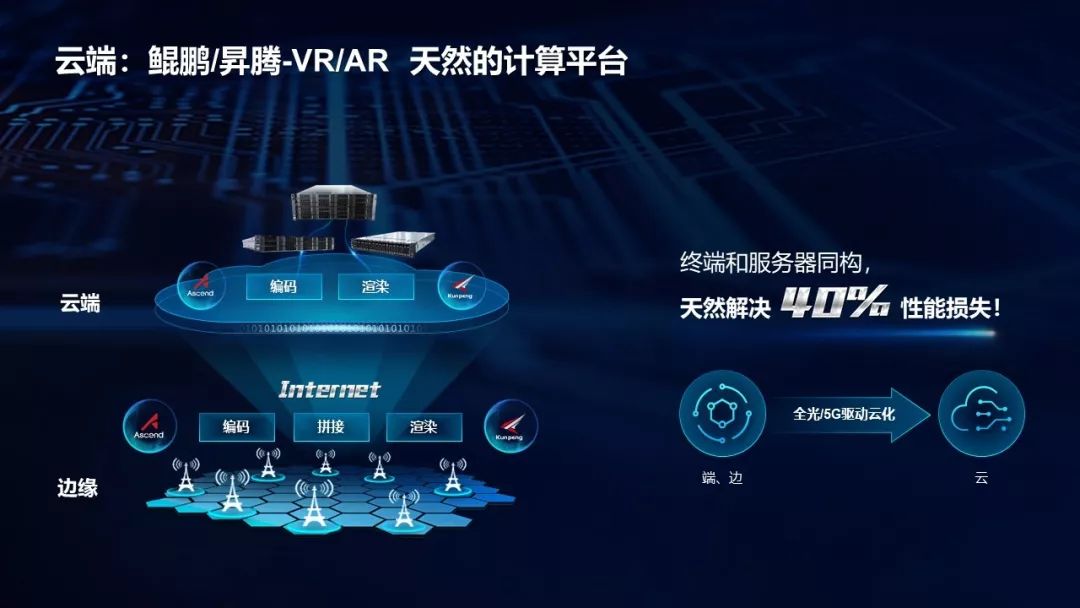 Finally, services in the cloud.

As you know, after the network speeds up, the VR content will be placed on the cloud in the future. Just as it was popular for netizens to download videos 20 years ago, almost all of them are on demand now.

Computing power is involved in the cloud on VR software. At present, most of the applications are developed based on arm. To the cloud, instruction translation is required, and there is a performance loss. Huawei's Kunpeng architecture is a natural computing platform for VR applications, avoiding 40% performance loss caused by this handover.

From the cloud to the edge, Huawei Kunpeng / Shengteng will become a powerful support for many applications. 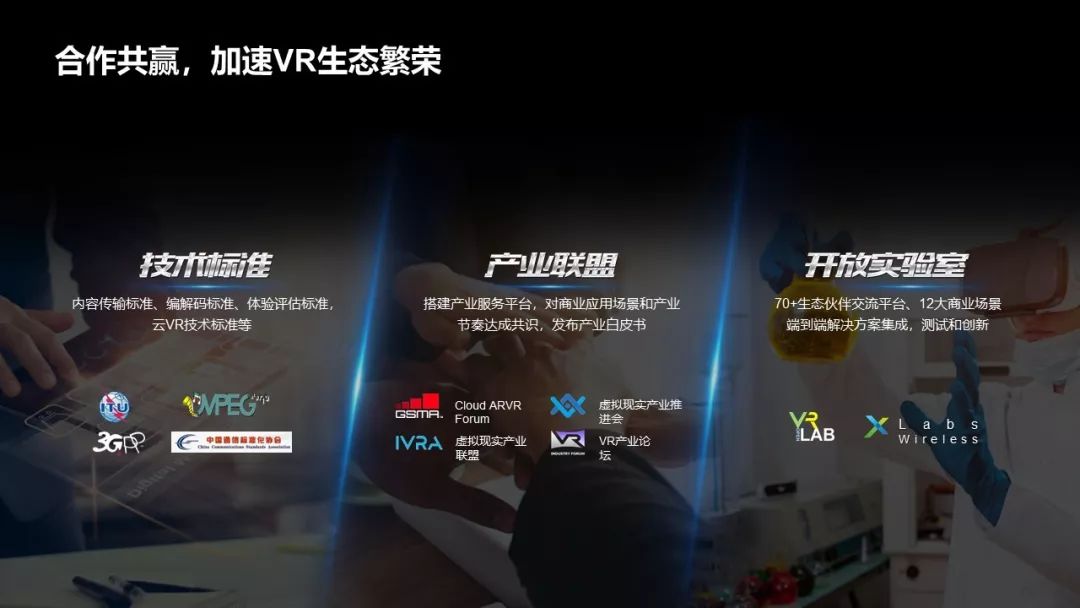 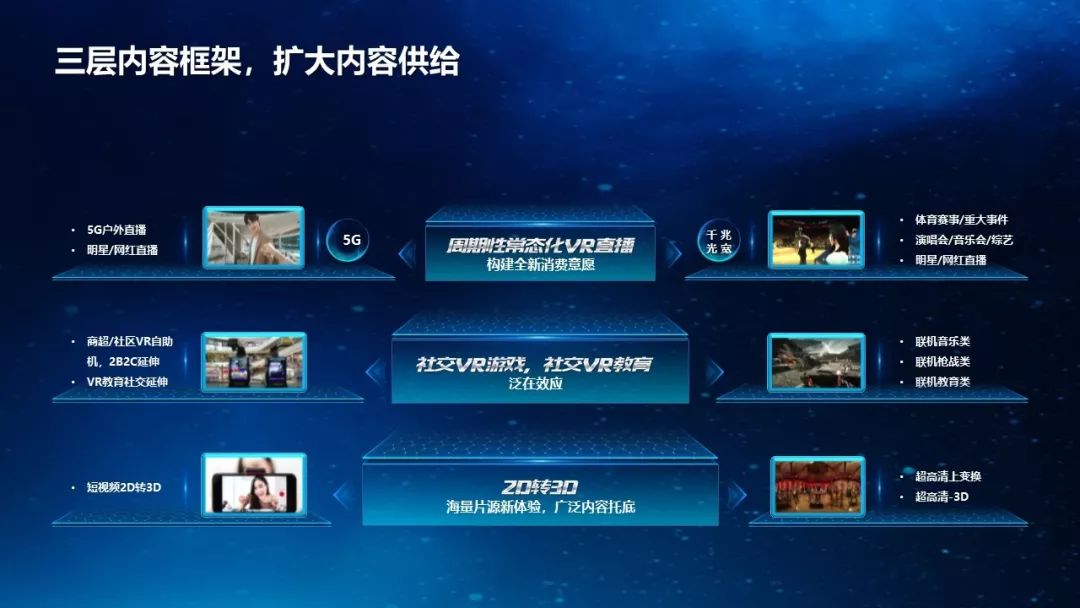 At present, the biggest pain point of VR is the extreme lack of content sources. There are millions of mobile applications, while there are only thousands of high-quality VR content in the world.

Based on the understanding of VR users and the actual deployment experience, Huawei puts forward VR.

Let developers develop at one time and access at will 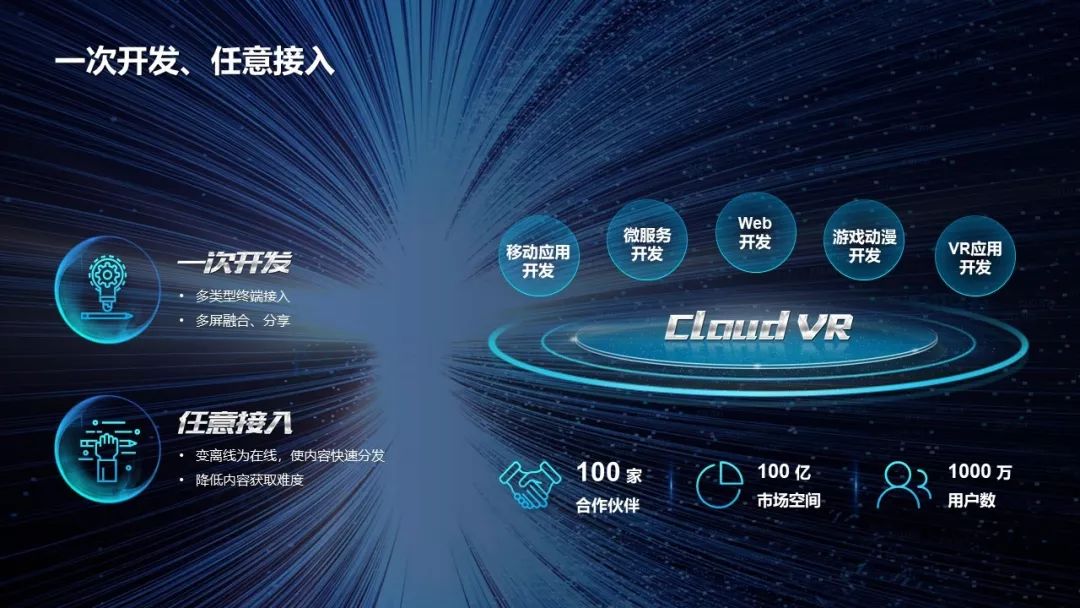 At Huawei, we provide developers with Cloud VR

Facing the future, Huawei continues to be committed to the construction of information superhighway, and hopes to work with its partners to build VR / Ar into the next smartphone industry.

Related news
Huawei Guo Ping:VR is expected to be the next smartphone industry this year.
Huawei hopes to build VR / Ar into the next smartphone industry
Huawei and apple meet on a narrow road, why VR is not on and AR is on?
Samsung lags behind Apple in the AR and VR space because of its obsession with foldable smartphones
VR/AR global invention patent ranking TOP100: Samsung, Tencent, baidu top 3
Hot news this week
The developer of the dating app Tinder has reached an agreement with Google over billing rules for its app store
Still did it! Canada has banned Huawei and ZTE from participating in the country's 5G network on "national security" grounds
Red Elf Lightning erupts in the Himalayas Spectacular Spectacle: Experts Reveal What Exactly Is This?
The founder of the Internet Quick Hand Su Hua was taken away for investigation, and the fast hand responded: the news was not true
Wang Xiang, president of Xiaomi, explained that a shortage of low-end chips is a major challenge in overseas markets
Or for Studio Display Pro, the release of Apple's 27-inch Mini LED-backlit Display has been delayed by October
Tencent Q1: The business service business has "slightly decreased" year -on -year, and resource centralized video cloud and network security | View financial report
One picture to understand! Blue Factory has issued 3 new machines in a row: self-developed chip blessing, the narrowest lower border
Sony released the active noise-canceling headphones WH-1000XM5, equipped with 2 chips and 8 microphones
Tencent established a smart technology company in Chengdu, and its business scope includes Internet data services
The most popular news this week
Xiaomi's first Leica flagship! Xiaomi Mi 12 Ultra's latest appearance map: the screen ratio is amazing
The founder of Xiaopeng Auto! He Xiaopeng uses "Keda Duck" to ask for help online
Not afraid of merchants "first rise and then fall"! 618 Taobao launched a new feature: one-click refund of the price difference
How does the Internet make People Copy each other
Fed Vice Chairman: The future digital dollar may complement the coexistence of stablecoins and commercial bank currencies
ZHANG Pingan, CEO of HUAWEI CLOUD: The value of data governance in China has not been fully tapped Data and AI should be accelerated
Shenzhen Atmosphere! The sales price of mobile phones, computers and other products is subsidized by 15%
Microsoft shows third -party components: Win11 chicken rib function is saved
No need to grab it! Sony announced an increase in PS5 shipments
Audi advertising poster photos only sell for 8 yuan? Photographers question the unreasonable use of the photo purchase