Microsoft Xbox All Access subscription rights may be back soon 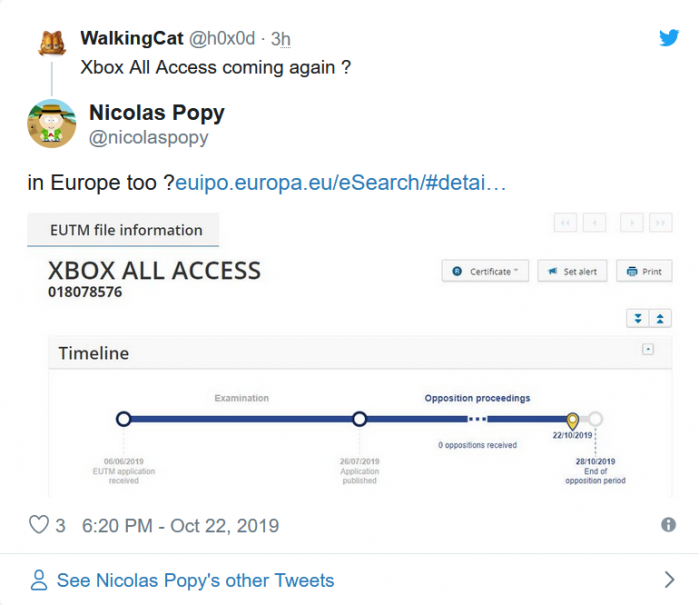 The Xbox All Access subscription service is limited to the United States and the price varies depending on whether you rent Xbox One X or Xbox One S.

The plan was closed as early as December 31, 2018, but the Xbox team promised it would return in a bigger and better form in 2019. Twitter whistleblower h0x0d has posted a message confirming that the Xbox All Access subscription service is set to return by the end of 2019.

Interestingly, Twitter user nicolaspopy replied to h0x0d's tweet, saying, "will it be in Europe, too?" with a screenshot of the application process for the Xbox All Access European trademark. This may mean that the return of Xbox All Access will also take users in Europe.

In addition, project xcloud may be included in the new plan in some way.

Related news
Microsoft Surface All Access Plan for China Online: 24 Interest-free Stage Benefits
Microsoft Xbox All Access subscription rights may be back soon
Some Microsoft 365 services are down Xbox and windows 10 activation are also affected (Figure)
Xbox series X will launch all access installment
Windows 10 may 2020 ready to launch: inventory of major new features (Figure)
Microsoft may release next generation Xbox low configuration version in August
Hot news this week
Wechat has not done this function for N years! Use this app to make up for the defects of wechat
Gree's response to "being disqualified from winning the bid": a mistake made by the bidder in sorting out the materials
IPhone 12: it's more like throwing away the charger
Microsoft official free data recovery tool windows file recovery experience
Apple wants to know: what do you do with the charging head of the old iPhone?
Tencent magic change Yang surpasses video self mockery: I'm a simple and honest fake spicy sauce lost 16 million
Luo Yonghao comments on ideal one: Tesla Model 3 is not a car of a level at all
A 400-brand evacuation Facebook： the internet giant strangled?
How long can "Laoganma" carry on after winning Tencent?
The dotcom bubble? U.S. technology stocks surpassed their 2000 highs relative to the S & P 500
The most popular news this week
Dong Mingzhu, the first elder sister in the battle
What does Tencent do with game derived content authorization and commercialization innovation?
Remote sensing data show that lakes in China have become clear as a whole
Glory Magic 3 coming? The blogger released photos suggesting that Huawei Kirin chip is still used
Microsoft transforms Android: customized for surface Duo
199 yuan millet router 4 pro on shelves Jingdong: dual Gigabit / 5 antenna
The first batch of "digital shopping centers" was launched on the line of Huarun, which moved the shopping center into Alipay.
Someone discovered the unpublished game of Nintendo NES 30 years ago and restored it from 21 floppy disks
Review of Sony PS2: the highest selling game console in history and the hot memory of post-80s / 90s
Xiaomi Youpin's first smart door crowdfunding: 10 Inch Touch Screen never power off