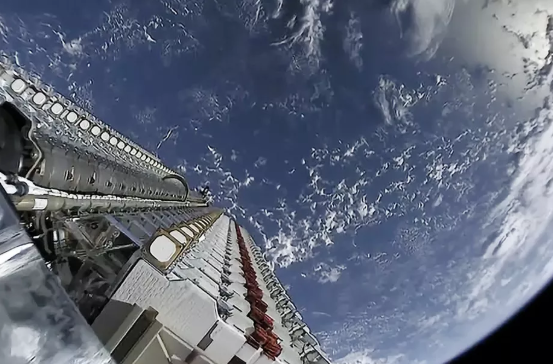 SpaceX could eventually launch tens of thousands of Starlink satellites designed to operate at low altitude above Earth and launch Internet coverage to the lower ground. So far, SpaceX has obtained permission from the Federal Communications Commission to put nearly 12000 satellites into orbit. Just last week, the company submitted another request to (ITU), the international regulator, for spectrum arrangements for an additional 30000 Starlink satellites. That means the company hopes to launch about 42000 satellites into orbit.

In a statement on ITU's new filings, a spokesman for the company said SpaceX is taking steps to responsibly expand Starlink's total network capacity and data density to meet user expectations as global demand for fast, reliable Internet continues to grow.

To date, SpaceX has launched only 60 Starlink satellites in a launch in May, three of which did not operate as expected. SpaceX also sent the remaining two satellites out of orbit to prove the company's ability to move it out of space if necessary. However, the remaining satellites will be elevated to a higher altitude and appear to be working. SpaceX CEO Elon Musk said Monday night that he had successfully sent a post through the Starlink network and said, ``The plan really worked! ! ``.

But there is still a lot of work to be done before people can access the Internet from Starlink. In addition to launching satellites, SpaceX still needs to complete the development of its user terminal, a small device that customers will use to receive broadband signals from satellites. According to SpaceNews, the company also needs to figure out how to launch the service. Hotwell believes it is possible to provide the service directly to customers, and in some countries customers will need to register with telecommunications service providers.

According to spacenews, "this is a completely different business for SpaceX," says shotwell. "It uses space technology, but it's a consumer business."

Related news
SpaceX started building Starlink Internet Satellite Constellation
Starlink Internet Satellite Enters Test Stage
SpaceX plans to provide Internet coverage through Starlink constellation by mid-2020
SpaceX has again successfully launched more than 60 satellites for its Starlink satellite internet constellation
SpaceX have put more than 350 Starlink Internet satellites in orbit
SpaceX successfully launched 60 Starlink satellites into the space Internet Era
SpaceX concessions to Amazon to reduce Starlink height to avoid overlap with Amazon's satellites
SpaceX makes concession to Kuiper, an Amazon satellite company, to reduce the orbit altitude of Starlink constellation
SpaceX accused Amazon of trying to slow down the deployment of Starlink
SpaceX is preparing to launch its new fleet of Starlink laser Starlink satellites to provide wider Internet service coverage
Hot news this week
During the quarter, we signed a multi-year intellectual property patent licensing agreement with a major licensee. This positive result enables us to obtain more 5G patent licensin...
Win10 digital version will be discontinued: free whitewash is still available Microsoft has not been under the dead hand for 7 years
Microsoft posted $17.4 billion in non-GAAP net income on revenue of $52.7 billion in the second quarter of fiscal 2023
YouTube complained about: using offline return-to-work policy to illegally block contract workers from unionizing
India receives Radio Signals from Galaxies 9 billion light-years Away Astronomers: Aliens not involved
Beautiful country semiconductor ushered in the winter, US high enterprises inverted, our country market doesn't buy it!
Cybertruck skipped tickets again! Mass production of Tesla electric pickup truck will not wait until 2024.
Apple will relax measures to deal with COVID-19 's epidemic and encourage employees to go back to work
Huawei P60 Pro latest configuration chart revealed: variable aperture and satellite communications are on the list
Intel: 14 generations of Core in the second half of the year, and build a new architecture from zero next year.
The most popular news this week
The iPhone is No. 1 in China! Why do people prefer Apple to Android?
China develops starch and protein synthesis technology for corn stover: Costs drop dramatically
Technology tree point crooked? Toyota's new patent: hold the door handle can be sterilized
Eight satellites in eight hours! China rushed to Venezuela's relief efforts
Apple bet on mixed reality, but the selling point of the product is not enough.
Baidu is reported to launch an AI chat robot service similar to ChatGPT in March this year.
The most powerful SSD becomes the last song Intel retired Aoteng hard disk: 6 years of performance is still leading
Don't wait for the entry-level Tesla! Extreme Krypton 003 prototype revealed: or 160,000 starting price
Apple's car accident detection function has been misreported constantly, and the rescue department has been tortured.
To accelerate electrification, Honda China's technical research Technology and production technology companies merge