publicly rejected by the Chinese and Russians

Fish and sheep from the temple of aofei

In 9102, it's over. It's even more open to the technology company to limit the recruitment on the basis of nationality and place of residence.

And by naming a public statement: China and Russia.

This is not from someone unknown, but from someone else.GitLaThe world's second-largest source-source hosting platform, the open-source unicorn of Google's heavy-gold investment, is one of its key customers. 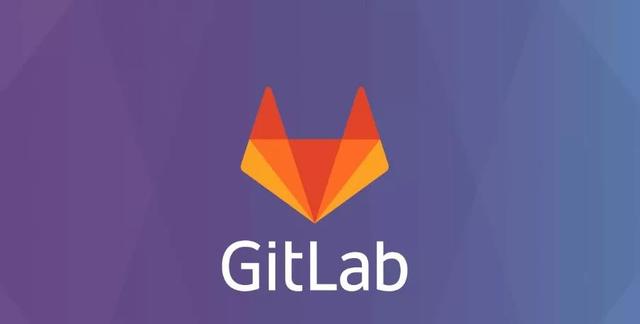 But in the latest public statement, saying he had been following the situation of the industry in general practice, not to Chinese / Russian citizens, "and who has a right to access the customer data of employees, Now also cannot be moved to China or Russia.

even also heavy features, this scheme is in fact veryhumanity. Because in this way, they do not have to divide the employees into three, six or nine classes, all employees can perform 100% of their duties, do not have to worry about the lack of access to the data!

As soon as the news came out, it reached nearly 200 discussion fever on Hacker News in just two or three hours.

Even the GitLab's own global risk and compliance director was stunned:

What happened? Why pick these countries? There's no law for us to do that, is there?

Before that, when its competitor GitHub cut off Iran and Crimea, gitlab was still strong for a time, and was considered as the "father's wind" of Google, a major shareholder.

However, today the whole of moths, so absurd, so don't know whether to laugh or cry.

start - up of the "blockade"

As mentioned in gitlab's recruitment information, gitlab's team is a diversified global team, which is committed to recruiting talents on a global scale and its members span dozens of countries.

Now, however, China and Russia may have to be crossed out of this "globalization".

In the official issus of the GitLab.com, this is the case:

We decided to enable for team members who have access to customer data"Job family country block".

There are only two countries on the blockade list: China and Russia.

According to gitlab, this means:

The company said such a measure, on the one hand because the enterprise customer data access rules, the countries of the regional policy is concerned.

On the other hand, it's also"The general practice of the industry in the current geopolitical climate".

In addition, Candice ciresi, gitlab's director of global risk and compliance, said she was told that China was on the list because Google exited the Chinese market. Google is crucial to gitlab's operations.

But Candice ciresi is obviously not satisfied with this reason: then why do we restrict Russia?

is not the exception, is the "new sanctions"

There are a lot of friends all in the exclamation of transparency, but it showed the trend:

In the current geopolitical climate, this is a common practice in the industry.

In the science and technology industry, there are indeed various similar events.

In July, for example, GitHub suddenly cut off accounts in Iran, Crimea and other places without warning.

The CEO, Nat Friedman, explained that this was to comply with U.S. sanctions and had to impose restrictions on the accounts of Iran, Syria and Crimea. 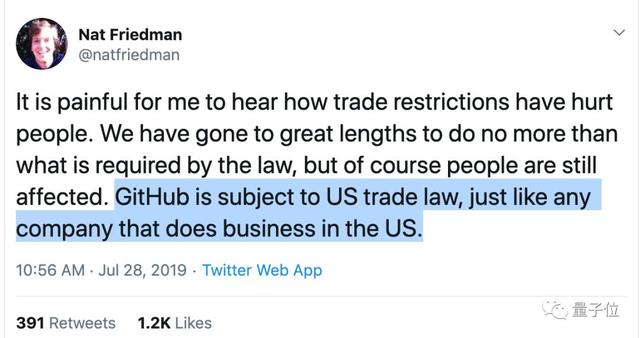 At that time, gitlab also received a lot of praise, because it was not so radical, but informed users of relevant issues in advance, and has not disabled any repo.

From the disclosed information, but is now more "aggressive", according to the nationality of the employees performed limited access.

This approach, in the view of many netizens, as an open source platform, such behavior is really strange. Others simply offer a very troublesome scenario:

Consider the case of loyalty and the excellent performance for a long period of employee Bob married with Su, who is a native of China. They live and work. In Su's parents became critically ill, her family decided to move back to china to take care of them, about one to two years, maybe more. Then, Bob must make the following selections: (a) (b) forced the resignation of long - distance (c) and his wife were divorcing was company policy to interfere with important life decisions, I think this is very dangerous.

But look at the practices of the United States, also already to sanctions as a means to compete with.

Not long ago, members of the US Senate also aimed their sights at the overseas version of tiktok, calling on newspapers to investigate it.

The reason is that this popular Chinese application among young people "may threaten the national security of the United States".

Moreover, it's not just a survey application.

Reuters reported that the U. S. government has launched a "National Security Review" of byte-out, re-examining the musical.ly. of the $1 billion purchase of social media in the first two years

But the current practice of America, which boasts of being a beacon, is ironic.

After all, in the case of a deal, the American company's Shearse bought the Chinese AI chip company's deep appreciation, and has not been under the pretext of any "Geopolitical situation".

Many reviews that say this is a nervous, not confident. Some netizens even also accused the US of the practice, arguing that this is a double - wins.

All natural: to what specific areas. This atmosphere but also to the academic realm.

Scientific research, which used to have no national boundaries, is now also set up.

Here, their weapon is "visa".

The latest example occurred at the end of October. The International Astronautical Congress 2019 (IAC) was held in the United States. The IAF Hall of fame award was presented to Qi Faren, a Chinese scientist.

But at the time of the award, the podium was empty - because the US did not issue visas in time.

Many people are confused, why give award, unable to let the people go up to collect the prize?

There is also the autumn school opening season this year. Nine Chinese students returned to school, but were searched, closed in black houses at Los Angeles International Airport, and then repatriated.

What's more, after the pressure from the University and public opinion, the response from the US Customs is still in a fog - nine Chinese students were refused entry because of the information found in the process of entry inspection.

However, there is no explanation as to where it is irregular. For a while, there was a lot of questioning on social media.

Since the beginning of this year, including UC Berkeley, Stanford, Yale and MIT, and the like, the highest it has ever representative at the time, defended the right of free academic atmosphere, and don't appeal to Asian, Chinese face of teachers and students to get special treatment.

But the basic reason for this statement, and perhaps there has been a special phenomenon exists even where we have to emphasize the disclosure statement.

The president of MIT, L. Rafael reif, has also publicly expressed that he was "heartbroken" to hear that MIT researchers and students were unfairly censored, stigmatized and nervous when dealing with government agencies, just because they were Chinese. 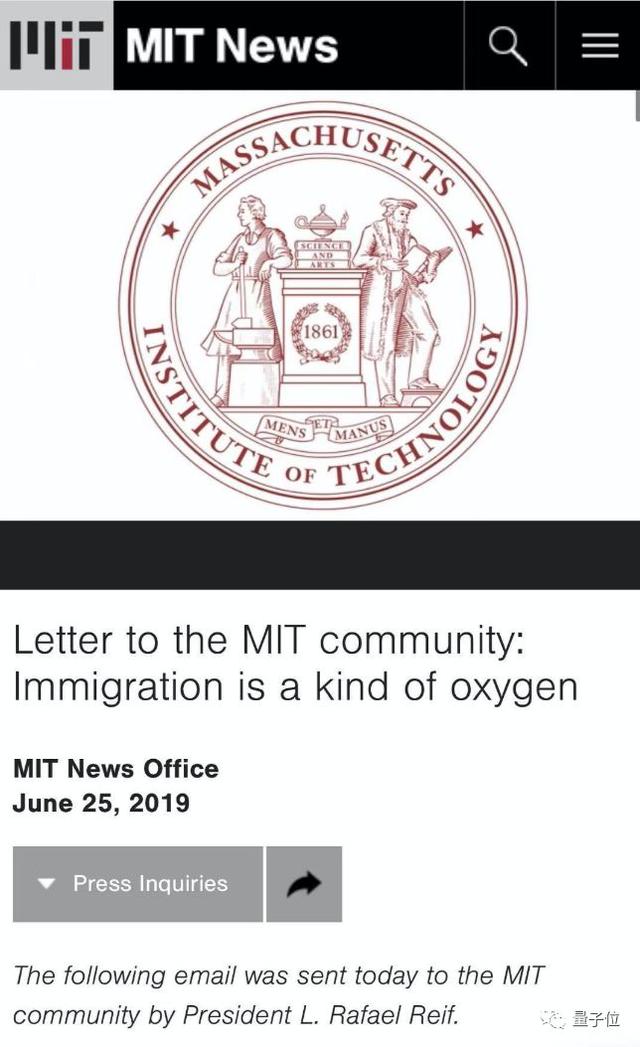 He also made an appeal, not spying on the academic production of paranoia and fear of harmful atmosphere, which may play a role in "grave long - term consequences".

But M.I. T. 's principal does not further said that, in the light of the consequences is bidirectional, it hurts.

And the consequences are beginning to show.

The international academic top ICLR meeting has been held in the developed countries of Europe and the United States, but because the U.S. visa is so difficult, the organizers decided to move the ICLR 2020 to Africa and to Addis Ababa, the capital of Ethiopia, under the lead of the New Jin Turing Award winner, Yoshua Bengo.

In a word, from industry to academia, from traditional fields to technology and Internet companies, the globalization of "global village" that was once expected is becoming realistic and distorted.

The development of the Internet has changed everything, because there are believers from all over the world who believe in the power of open source.

But now, even the open source code hosting platform, which uses open source as the business model, has made such a ridiculous move.

What do you say?

Related news
Release of annual report of global e-commerce: online shopping of Chinese goods at foreign scientific research stations in Antarctica
The English name of Chinese liquor has been changed: Chinese Baijiu has been officially launched
A heavy blow to the spurt: no swearing on Russian social networks and penalty for violators
Meta allows the publication of violent speech against Russia The Russian Federal Investigation Commission has criminally filed a case against him
PayPal will block the electronic accounts of all Russians on the 18th
Tesla's Chinese Rivals See Record Monthly Delivery on Further Recovery from Covid
Hot news this week
With the NIL technology, Canon wants to provide China with a lithography machine comparable to the EUV
The Long March 9 is basically confirmed: the low-orbit carrying capacity of 150 tons can carry the entire space station into space
A small plane in the US has crashed into a 30-metre high voltage power line and got stuck: 80,000 people affected
Alibaba launched a new cross-border e-commerce platform in Spain, aiming to operate independently in the middle and high-end market
Can recording others' wechat chat records be used as evidence? The Beijing Internet Court has an answer
Google is concerned that Microsoft's acquisition of Activision Blizzard will affect the ChromeOS experience
When pure water is used in China team to solve the problem of seawater hydrogen production: it is expected to become an original industry
It's not just Huawei! Beidou has penetrated more than 20 industries and applied more than 15.5 million products
The second generation Snapdragon 8 flagship! Mi 13 toughened film appeared: four sides and other narrow screen accounted for a stable ratio
A Tesla crashed into two cars in Taizhou, Zhejiang province, killing two and injuring one, police said
The most popular news this week
Intel says key issues with U.S. chips have been resolved
RTX 4090 card into PPT 3A game masterpiece apology urgent update patch
Transsion will be holding a launch event in Dubai in addition to mobile phones and laptops
The first Snapdragon 8 series phone in the popular colors of 2023 hits the shelves: a stunning 5600 yuan design
Why do laptops need more memory?
Increase production capacity! Apple speeds up iP14 Pro shipments: Arrive as soon as New Year's Day 2023
What a fan! Netizens spend ten thousand yuan to get three mobile phones at once: beautiful
A bachelor's degree is needed for a New York City rat control manager who earns 1.2 million yuan a year
4090/80 Take that! Third party pre-orders for AMD RX7900: The most expensive over 11,000
Mi 13 series press conference preview: It is likely to start 3999