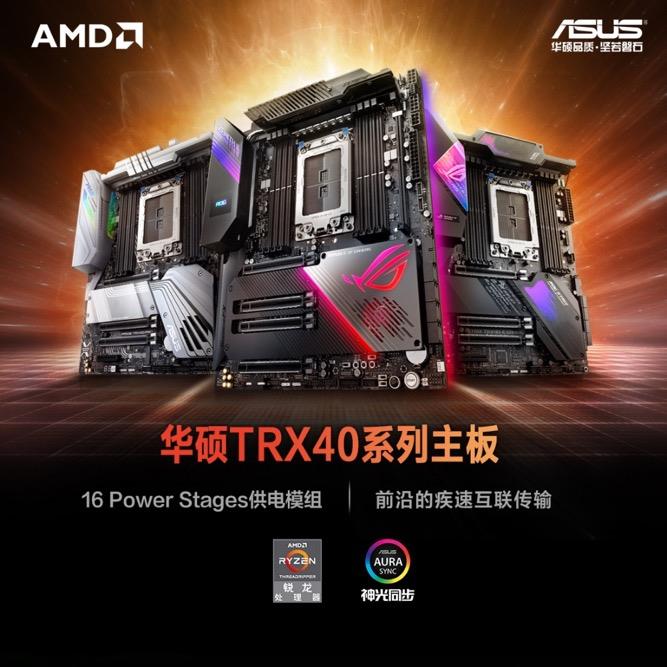 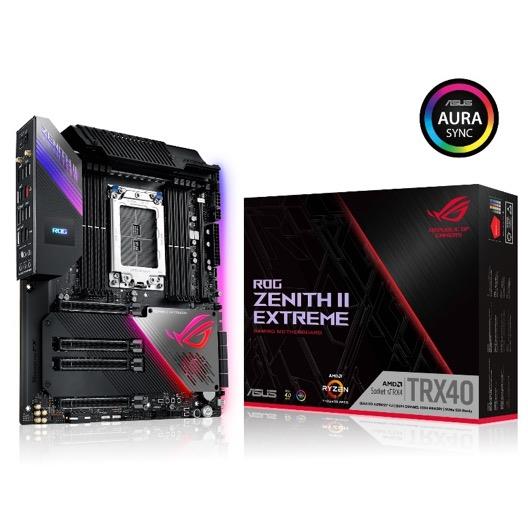 The Rog zenith II extreme motherboard is specially designed for the e-sports players who pursue the ultimate performance. As the flagship motherboard, it has top-level configuration, first-class technology and innovative aesthetics, which can make the third generation AMD threadriver processor run faster, higher and achieve a smoother game experience. 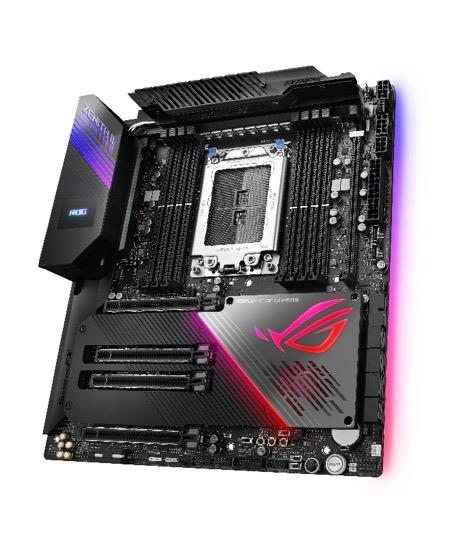 The appearance of the main board is cool and the lighting effect is beautiful, which is deeply liked by game players. It can also turn off the lighting effect as required, low-key and luxurious, and meet the needs of users who like the simplicity and non lighting effect of industrial machinery. Large area all aluminum metal armor and I / O protective cover have cool aura RGB lamp effect. The powerful and hierarchical lamp effect makes this dream flagship motherboard more shining! Support aura sync, and with the help of the on-board programmable light with a pin, you can get a dazzling light effect beyond your imagination. In particular, its full-color livedash OLED system display can display a lot of information, including post code, important information of the system, as well as customized animated GIF graphics. And the metal back plate design provides strong protection and heat dissipation, all-round heat dissipation design, bringing better heat dissipation effect. 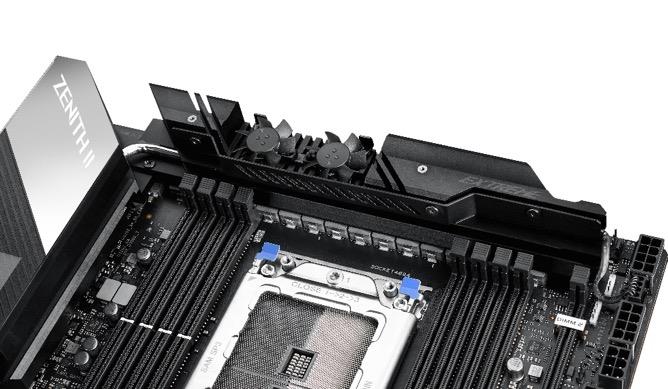 The ROG ZENH II EXTREME motherboard is designed with a reinforced 16 Power Stage power supply module, which can fully meet the power supply requirement of the limit overfrequency. In order to ensure that the high load is still stable, the ROG ZENH II EXTREME main board has an all-round heat dissipation solution, which provides a solid foundation for the user to build the strong electric competitive equipment, and can lead to stronger performance and lower operating temperature. The super-large heat dissipation armor with the built-in two hidden heat dissipation fans can be intelligently controlled and stopped, and the heat conduction pipe is also provided to improve the heat dissipation efficiency when the temperature reaches 60 DEG C. In addition, a heat pipe is connected with the main VRM radiator and the auxiliary radiator under the I/ O back plate to further enhance the heat dissipation. 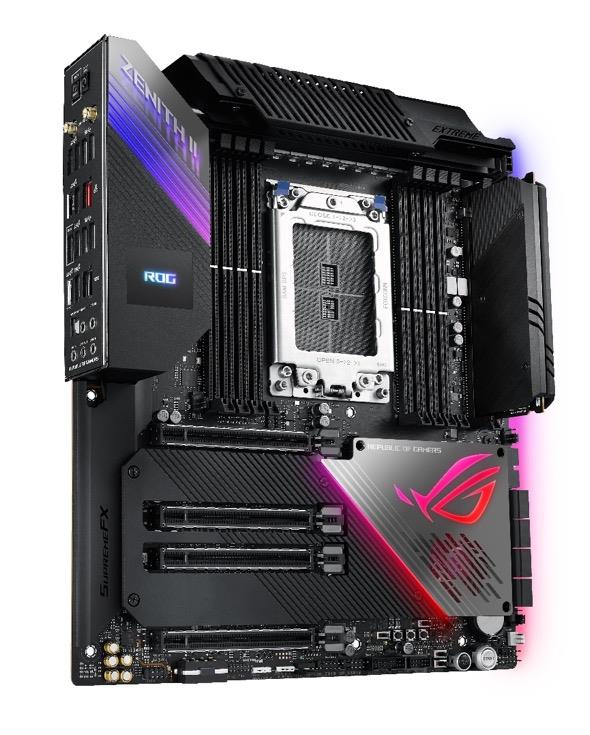 The Rog zenith II extreme motherboard is equipped with up to five m.2 slots, each of which uses up to four PCIe 4.0 channels, providing excellent storage performance. Including 3 m.2 interfaces on board, and with the help of the upgraded Rog dimm.2 expansion card, 2 additional m.2 interfaces can be provided. In addition, eight SATA interfaces are provided to meet the requirements of mass storage.

Workstations and high-end desktop computers often involve the transfer of a large amount of data, so network performance is critical. The ROG ZENITH II EXTREME motherboard has an avant-garde network connection performance, in Intel 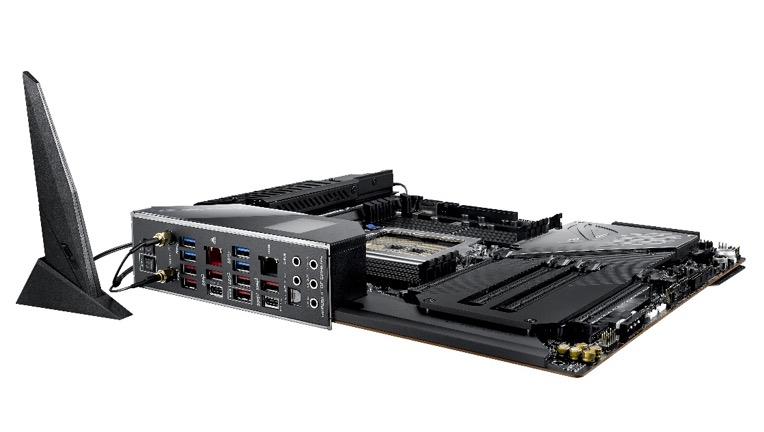 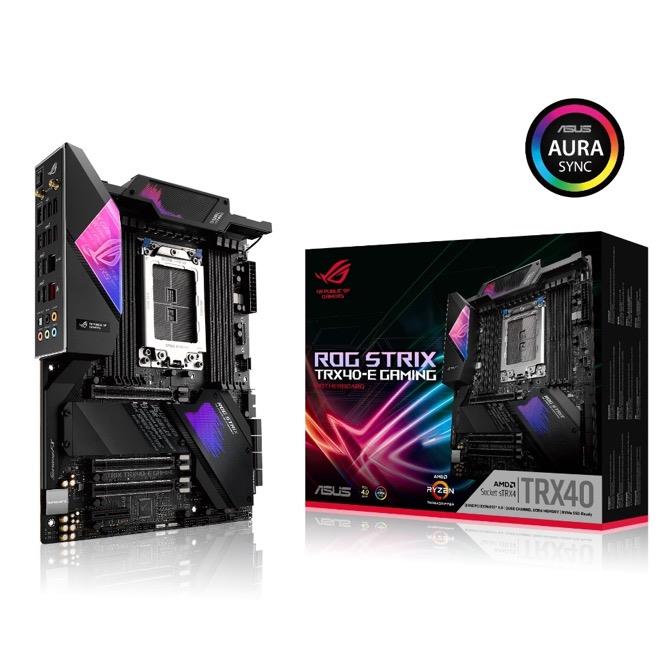 Rog Strix trx40-e gaming is a powerful motherboard. Based on the standard ATX version design, it has a series of powerful functions and requirements corresponding to the high-end desktop platform. It has the fashionable and avant-garde electric competition totem and the innovative 1.3-inch livedash OLED system display screen, which can display system information and custom graphics or animation in real time. In particular, its m.2 and audio module areas are equipped with full coverage heat radiation armor, sharp and smooth line design and aura RGB lamp effect, presenting a unique trend aesthetics.

As a new product of the Rog Strix Raptor series, the Rog Strix trx40-e gaming motherboard is equipped with a 16 power stage power supply module design, and two hidden intelligent temperature control start stop VRM cooling fans are built in the super large cooling fins, which can effectively dissipate heat and meet the stringent requirements of CPU extreme overclocking. There is also the procool II power supply interface with a special solid structure, which helps to efficiently and stably provide power support to the third generation AMD threadriver processor, and it is covered with metal armor, providing additional heat dissipation. 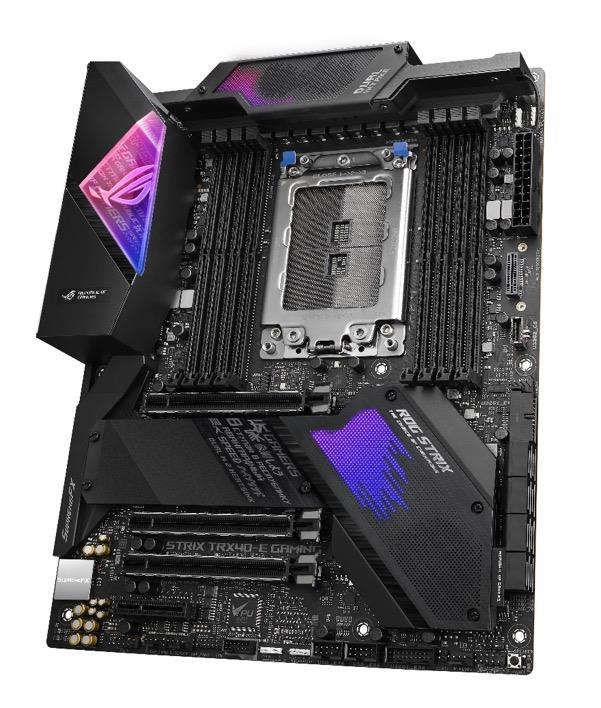 The motherboard also has strong expansibility. There are 3 m.2 interfaces on board, which provide PCIe 4.0 x 4 bandwidth, and 8 SATA interfaces. It also has 8 USB 3.2 Gen 2 interfaces with 10Gbps bandwidth, including one type-C interface, one USB 3.2 Gen 2 front-end interface and four USB 2.0 type-A interfaces, providing fast transmission experience. In addition, the Rog Strix trx40-e gaming motherboard provides a wealth of standard fan pins, as well as integrated water-cooling and water pump pins, all-round control. 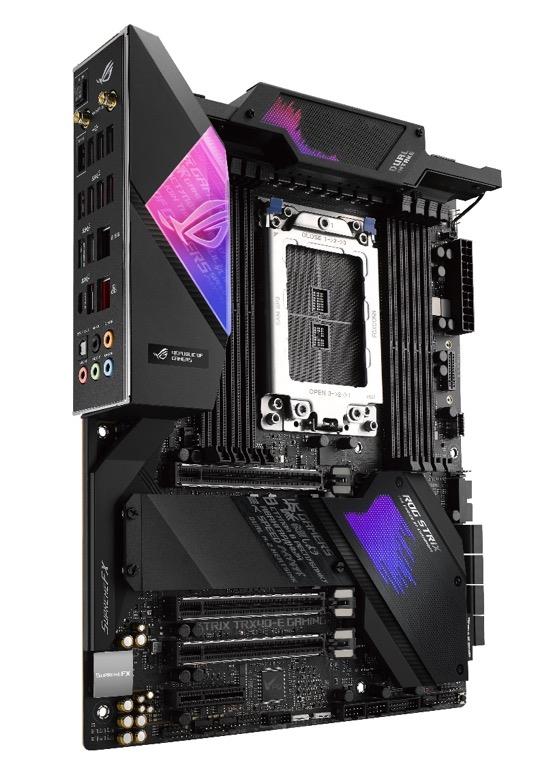 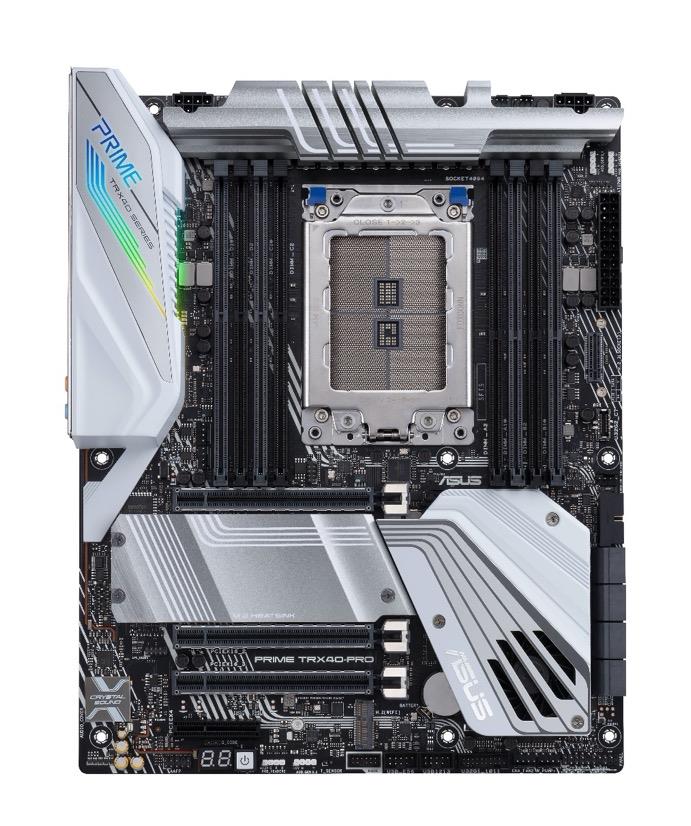 Prime trx40-pro is a product specially designed for content creators (such as video editors, 3D renderers) and DIY enthusiasts. It is a reliable choice to build a multi-core platform with the deep research of Asustek's technology for decades. It adopts the 16 power stages power supply module design and the super large VRM heat sink fin designed by metal drawing, which is not only simple and beautiful, but also can provide efficient heat dissipation. Three PCIe x16 safeslot high-strength graphics card slots are provided to support the latest PCIe 4.0 technology and x16 / x16 / x16 mode operation. 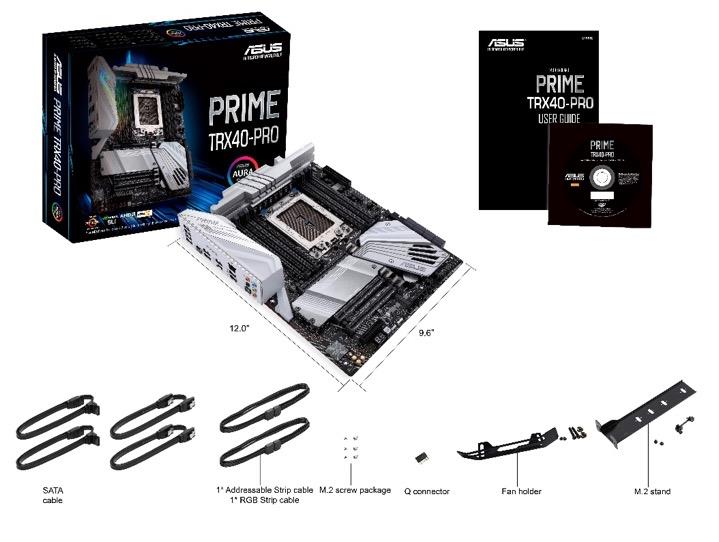 The prime trx40-pro motherboard carries three m.2 interfaces and supports PCIe 4.0 X4 mode. By building a multi nvme SSD RAID array to provide fast transmission speed, superior performance accelerates the efficiency of content creators. Two of the interfaces are equipped with metal heat sink, which can effectively reduce the temperature of m.2 SSD and ensure the efficient and stable operation of the equipment. In addition, SSD can be installed vertically through m.2 bracket to make full use of nearby air flow for cooling. 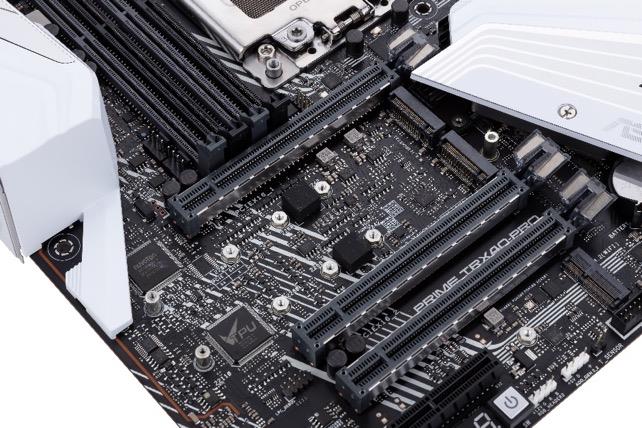 In addition, the PRIME TRX40-PRO motherboard is equipped with three USB 3.2 Gen 2 Type-A and a USB 3.2 Gen 2 Type-C interface, up to the speed of 10Gbps so that the transmission can be completed in a twinkling of an eye. It also has a rich and comprehensive fan and cold pin, which can be set up through Fan Xpert 4 intelligent fan control to achieve the best heat dissipation effect. The M.2 (Key E) interface is on board, which supports Type2230 Wi-Fi/ Bluetooth type device, and Intel Gigabit network card provides fast wired network environment. Using the latest Realtek S1220A audio chip, with professional audio shield and independent audio partition line, to provide pure sound quality. Support for DTS:X at the same time