Amazon AWS recently announced a product called deepcomposer, which has both software and hardware. Its positioning is the world's first machine learning composition keyboard for developers. Through AI composition, programmers can learn and master how to develop machine learning technology, especially how to use generation versus network (GAN).

As long as you use the keyboard to input a short melody, deepcomposer can adapt it into different styles such as rock, pop, jazz and classic, generate an original music with similar rhythm, and support sharing to the Soundcloud platform. If add some personal creativity and code, it can also learn and realize the music style created by users themselves.

At present, Amazon only announced the existence of deepcomposer, and the specific technical details and release date have not been announced. 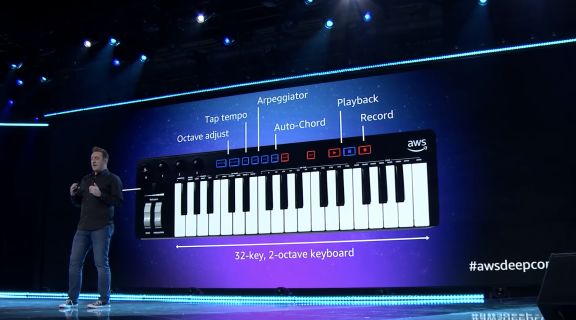 The official saidThe product needs to rely on Amazon AWS cloud service. After the official launch, there will be a dedicated deepcomposer console on the cloud platform, as well as relevant tutorials, demonstration codes and training data.

Since the AI composition model has been pre trained, developers can try it directly without writing any code at the beginning of the introduction. For example, AI has mastered the melody of the nursery rhyme "Twinkle, twinkle and crystal".

During the official demonstration, a 32 key entity keyboard with AWS logo was used, on which 11 led buttons, 3 knobs, 1 volume adjusting knob and 1 encoder were installed. What's more, for many programmers who are not good at melody, many chords have been preset and can be played and mixed automatically.

The keyboard is powered by USB. It needs to connect with the computer and upload music data to AWS in real time. Even if you don't buy a physical keyboard, there is a virtual deepcomposer keyboard available on AWS. 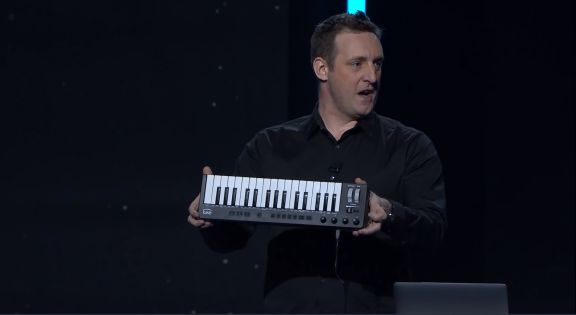 Deepcomposer currently supports rock, pop, jazz and classic four preset styles, all of which are trained by the generation of counter network (GAN). Amazon calls the algorithm behind it asGenerative AIOne of them.

After being familiar with the basic principle and framework of Gan, developers can also write new code in the console, adjust the super parameters of the model, such as tone and speed, and use the sagemaker tool to customize the model architecture. This is also the significance of Amazon's development of AI compositor keyboard.

Gan is a method of unsupervised learning, which can be learned and trained by two neural networks.It can deal with many complex tasks such as image generation and video processing, so it is widely used in machine learning in recent years. 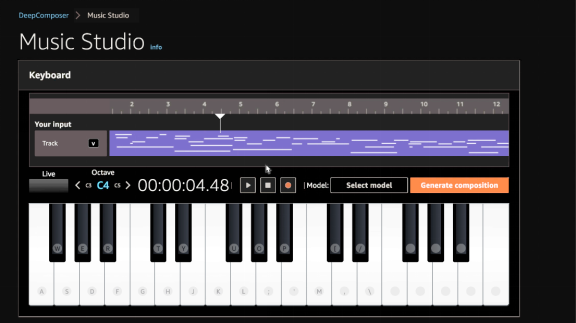 Amazon said,We hope to provide a simple way for more developers interested in machine learning and Gan with the help of deepcomposerWhether they have relevant background or not, they can create music happily while learning Gan and machine learning skills.

This is not the first time Amazon has launched a similar machine learning training product. It has launched deepelens in 2017 and deepracer in 2018. The former supports face recognition and object recognition, while the latter is an autonomous training vehicle with enhanced learning.

Related news
Demystifying the rise of Amazon AWS: from free services to market leaders
Amazon AWS Chief Cloud Computing Enterprise Consultant: We are going through a technology shift period
Heavy! AWS China celebrates female coach: Zhang Wenzhao
Amazon launches the AWS quantum computing service brand
Amazon AWS launches an AI keyboard that can compose music to make programmers fall in love with music
Amazon sagemaker, the golden tool for machine learning on AWS cloud, officially landed in China
Hot news this week
Too many questions! Apple has changed the timing of the official release of iOS 16 series
Monkey acne cases have ranked first in the world that the United States has announced the emergency state of public health
Tencent and Logitech cooperation of the cloud game console Revelations: equipped with Android system configuration is low
Credit card points rule intensive adjustment online transaction points more "valuable"
High reserves and low cost experts: calcium ion batteries replace lithium batteries to stand up to the daily
Alibaba executives interpret financial results: the focus of the consumer side is no longer to attract new, but to do a good job in stratified operation
Losses in a single quarter of $ 23.4 billion a record, SoftBank did not carry the plunge of technology stocks and the devaluation of the yen
Sources say Samsung's Galaxy Z Fold4 is going up in price: a 512GB top unit will cost more than 13,000
The prevention and control of the American Monkey epidemic has failed. What should I pay attention to?
Is the micro -business headache? WeChat friends are suspected to have a big move: 7 can only be posted a week
The most popular news this week
After selling Tesla for $6.9 billion, Musk said he was not selling it, but a survey said he was still selling it. The title of the world's richest man may not be guaranteed next ye...
Distributed database OceanBase announced 4.0 product release, single -machine deployment performance is super mysql
The three major indexes of the US stocks opened sharply: ROBLOX fell more than 4%, Twitter and Tesla rose more than 3%
Japan has confirmed that China has overtaken the US for the first time in the world's top three indicators of scientific papers
A wake-up call for Apple? Foxconn says it is feeling the sting of slowing demand for smartphones
Joining Chip Alliance could serve as bridge, says South Korean Foreign Minister
Joe Biden also mentioned Chiplet? An unexpected A-share buzzword in A White House briefing
Nio Li Bin responds to mobile business rumors: This should be the definition of other people's imagination to us
Amazon is pushing a feature called "swipe to pay" that scans your palm to pay in seconds
Text message color, picture quality compression! Google calls out Apple for improving cross-device messaging