I'm afraid we can't keep our hands from chopping. Steam's autumn sale is all these games that anyone wants to buy 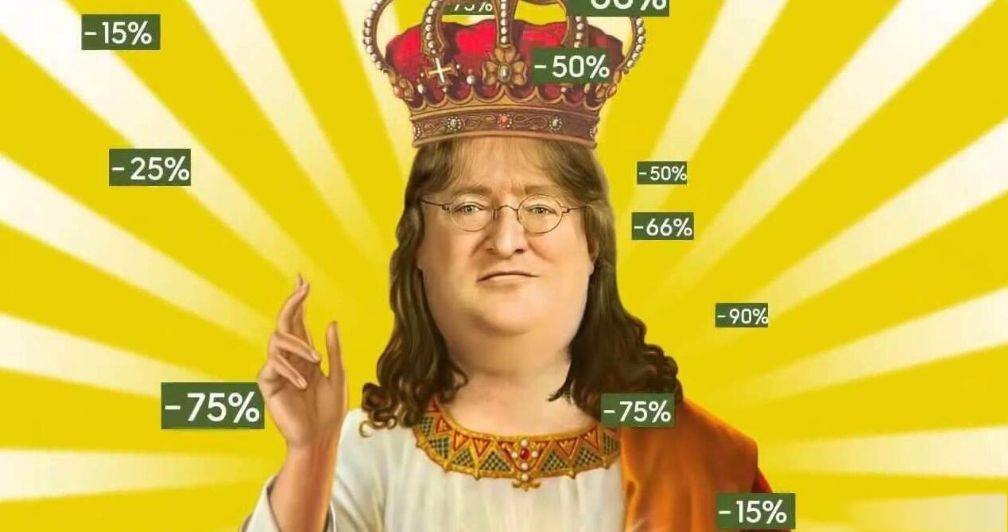 Not much nonsense, direct entry to the subject, Steam's fall in the fall, will give the players a big discount on the game, this year's also no exception, November 27

Next, I would like to recommend some games worth buying.

Close to the end of 2019, many high-quality game masterpieces have been released this year, and these games have accompanied the players to spend a lot of happy game time.

1. Not every kind of cold rice is fried. The biochemical crisis 2 reset edition is really delicious! 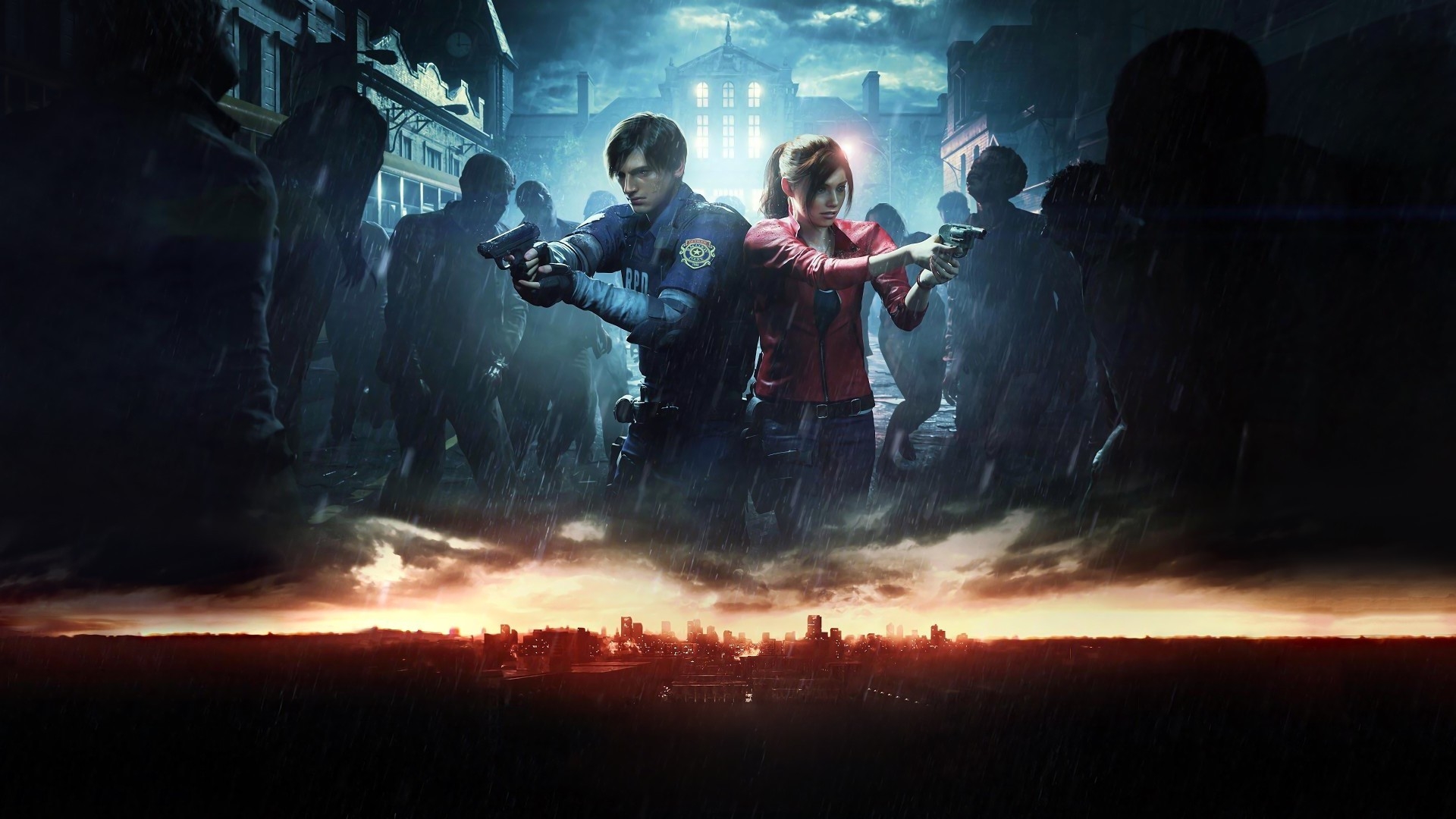 But 20 years later, Kapp dreamt of using "biochemical crisis 2 reset edition" to bring this brilliance back to full bloom in the new era. This is not only feelings, but also ambition and courage! 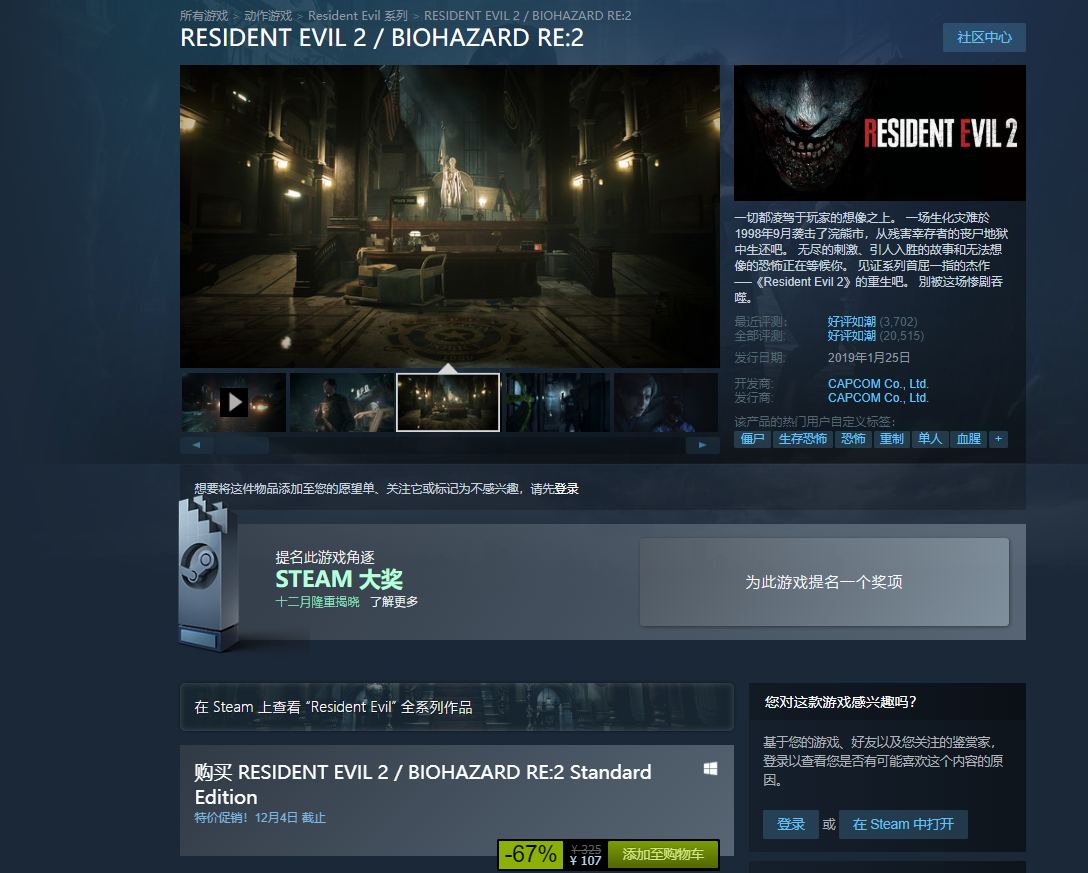 2. In turbulent times, there are disputes and strategizing strategies. The war of Three Kingdoms is a happy one! 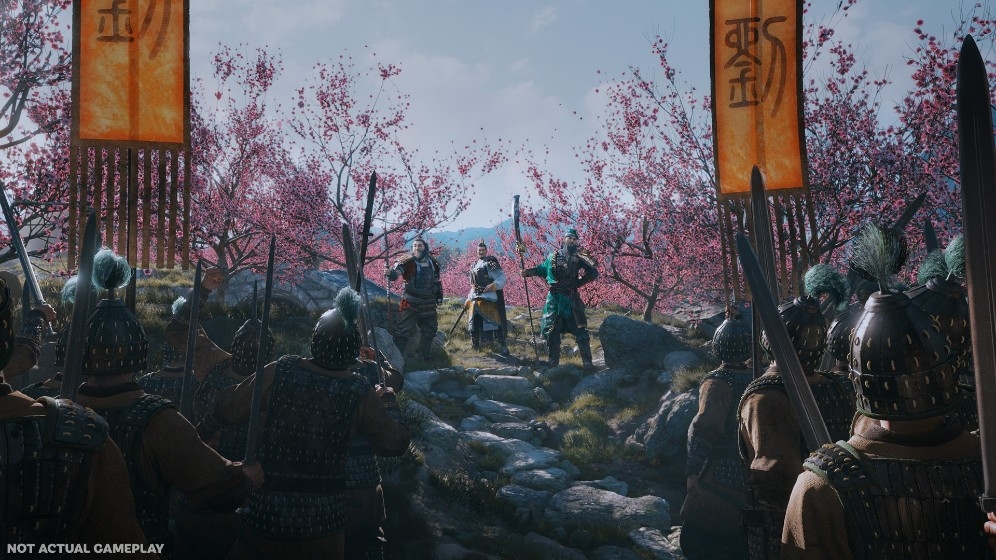 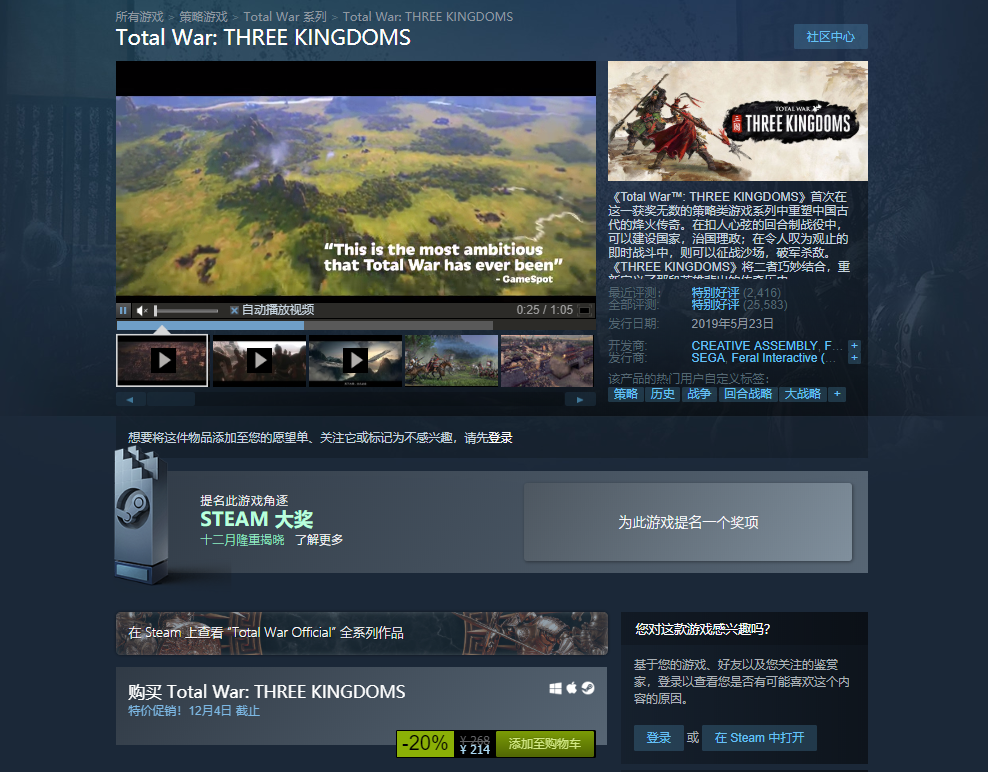 Three, pain and joy," a wolf: shadow two dead "how one. 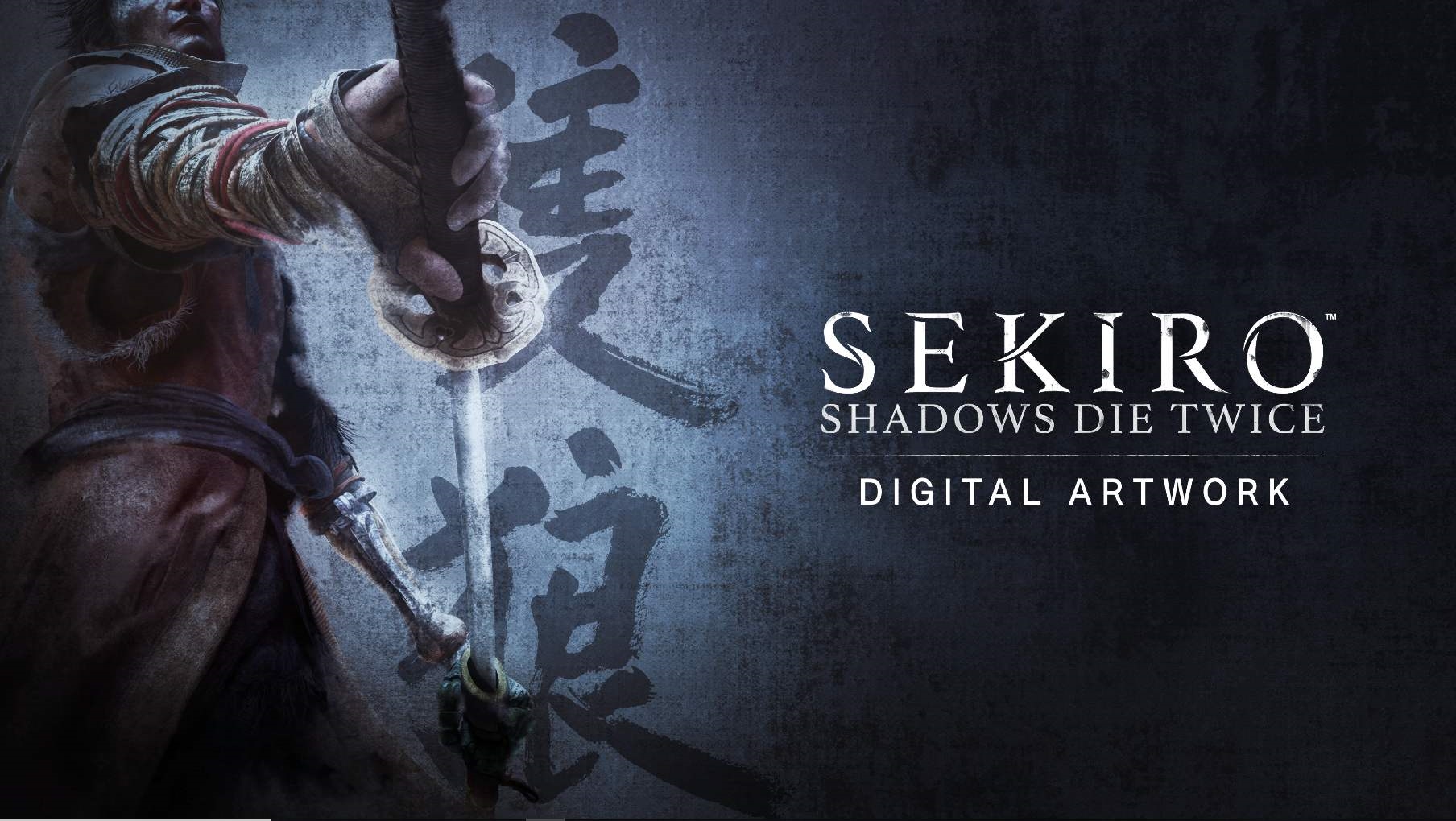 At about the time of Wolf's release, many players'computer screens were dominated by a word of fear. 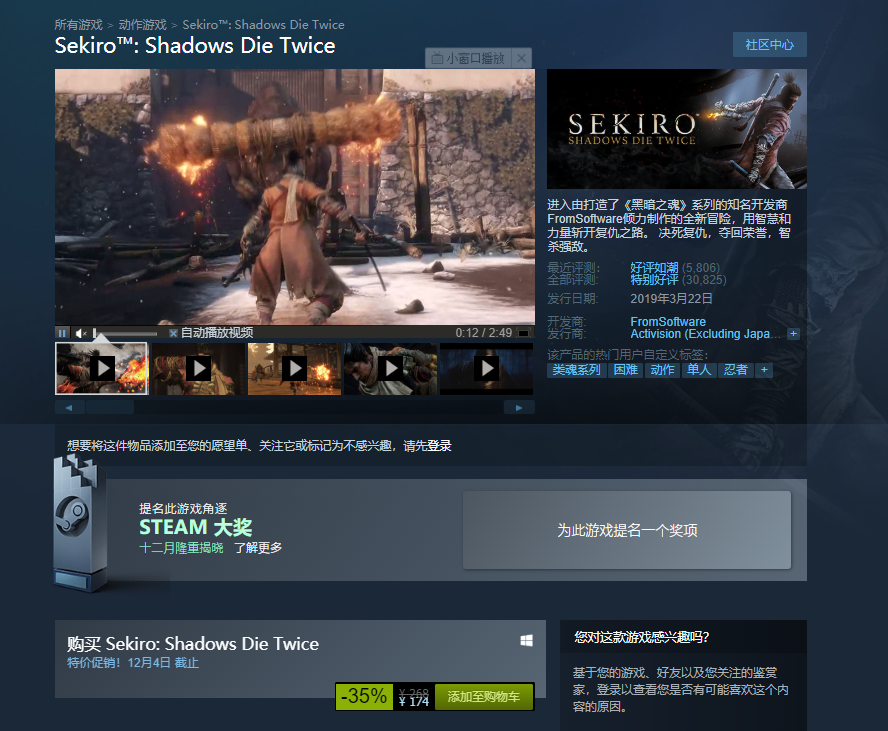 4. NBA: 2k20 is mixed, but it is still the most fun basketball game 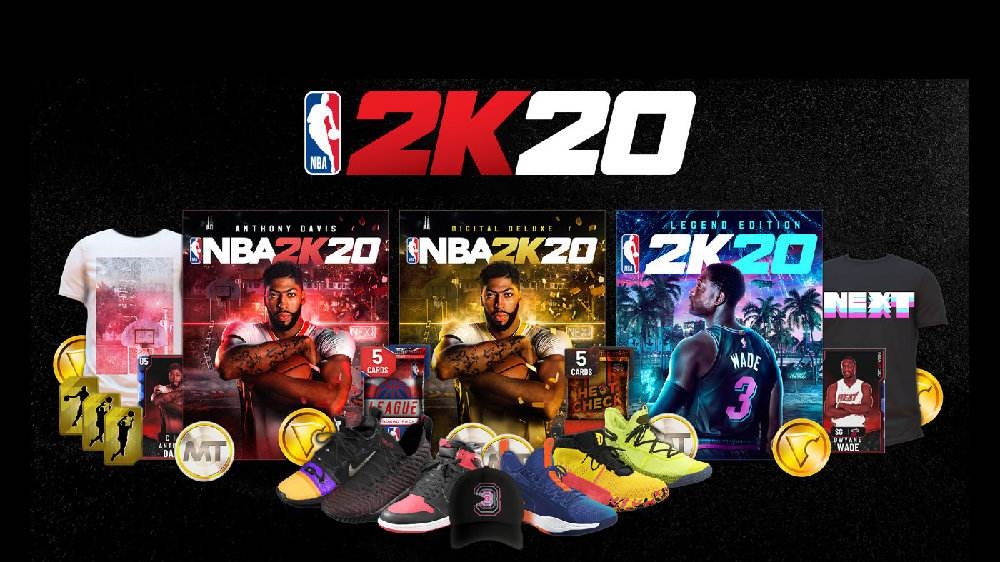 For basketball fans, "NBA 2K" series will never be new. NBA 2k20, a new year's product, is one of the games that basketball fans must play. Although the "NBA 2k20" is not well evaluated by the players after its release, its quality and position in the basketball game cannot be shaken. Squeezing toothpaste has become the norm of the NBA 2K series. However, in addition to some small BUG and some of the optimization problems of NBA 2K20, gameplay has been upgraded, especially in the past years. So if you want to experience the cultivation of NBA stars, hurry to start. 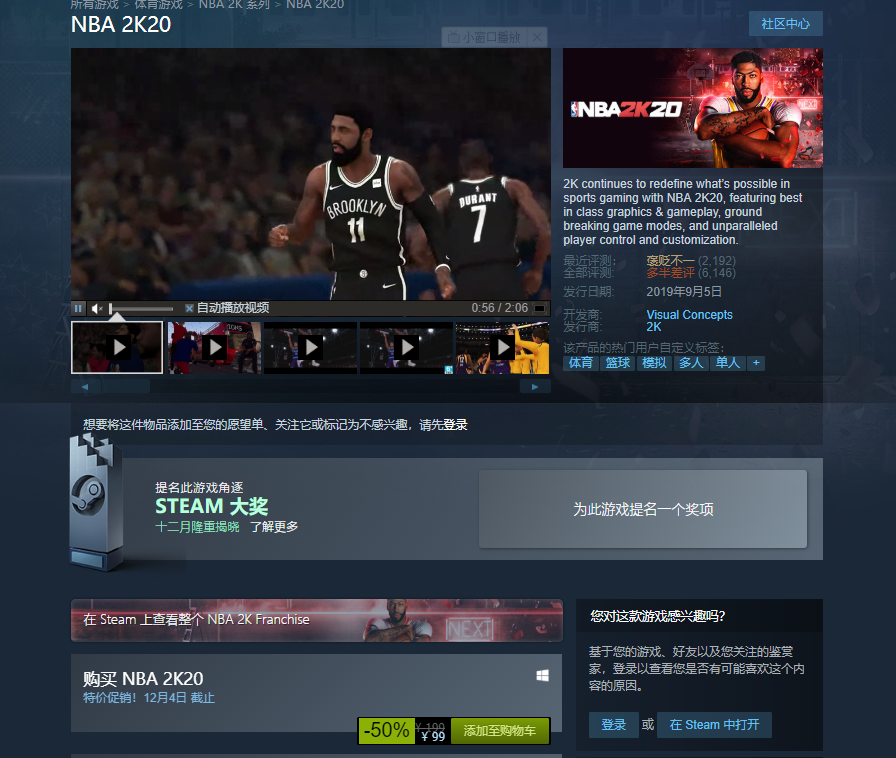 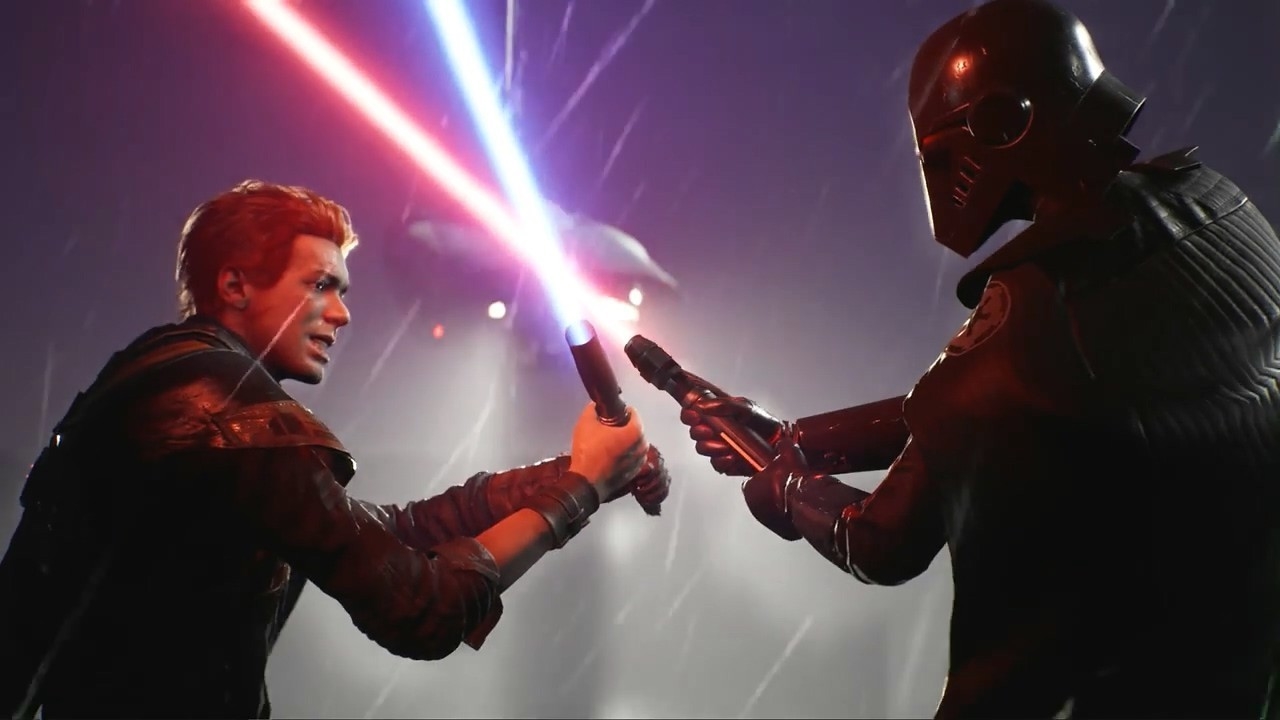 Unfortunately, the game didn't get a discount in this promotion 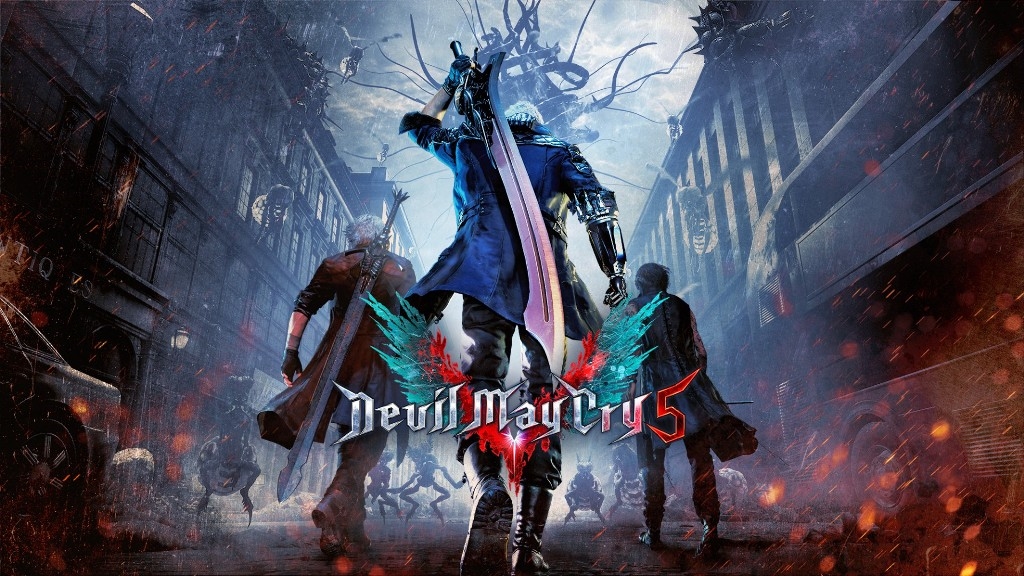 "Ghost cry" has a history of 18 years. It is the classic game IP of Capcom. The series has shipped more than 16 million sets in the world. The series of gorgeous combat performance, fascinating scene atmosphere, ups and downs of the game plot all attracted countless loyal fans, the classic "ghost Cry 3" is the childhood memories of countless old players. This year's release of "ghost cry 5" was made by Capcom headquarters, and the game was made with the same re engine engine engine as "biochemical crisis 7" and "biochemical crisis 2 remake", and this work was specially enhanced. The new game engine has raised the screen to a new height, full of realistic character design, amazing lighting, environmental effects and gorgeous combat special effects, bringing fans a visual feast. 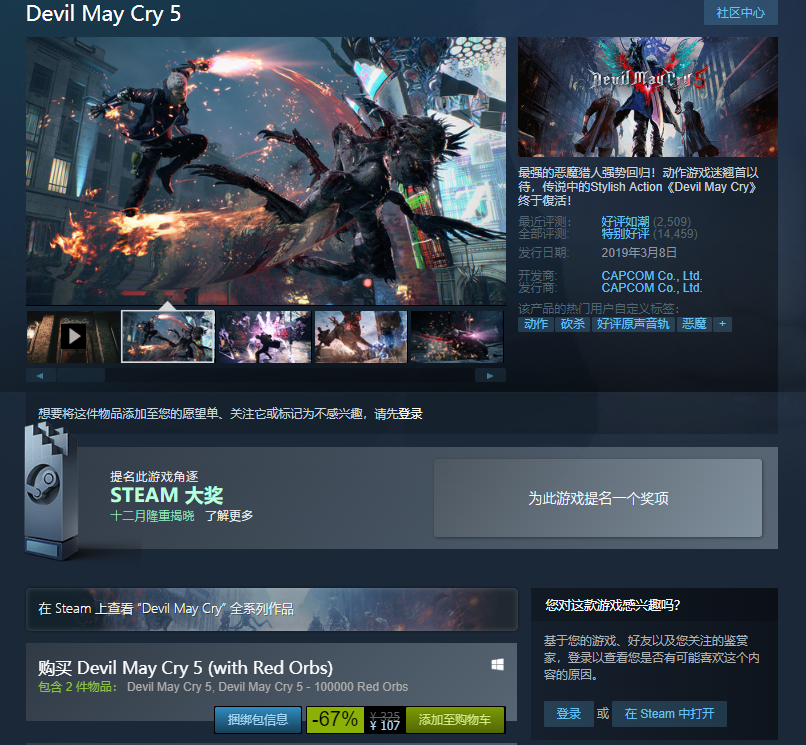 Some other excellent game masterpieces in 2019 are not available on steam platform, so we will recommend them later. Here are some classic series of old games worth playing in the autumn promotion of steam

1. R star classic, which will appear in gta5 in the sales list every time it is promoted

Gta5 was released in 2013 and officially launched on the PC platform in 2015. However, six years later, it is still the cash cow of R star. Every time it is promoted, it will appear in the sales list. It can't blame the players. It's just weird. How can it be so fun? Don't blow anything about this game. You may want to play once in a while. If you want to make up tickets, you can also make up a ticket. 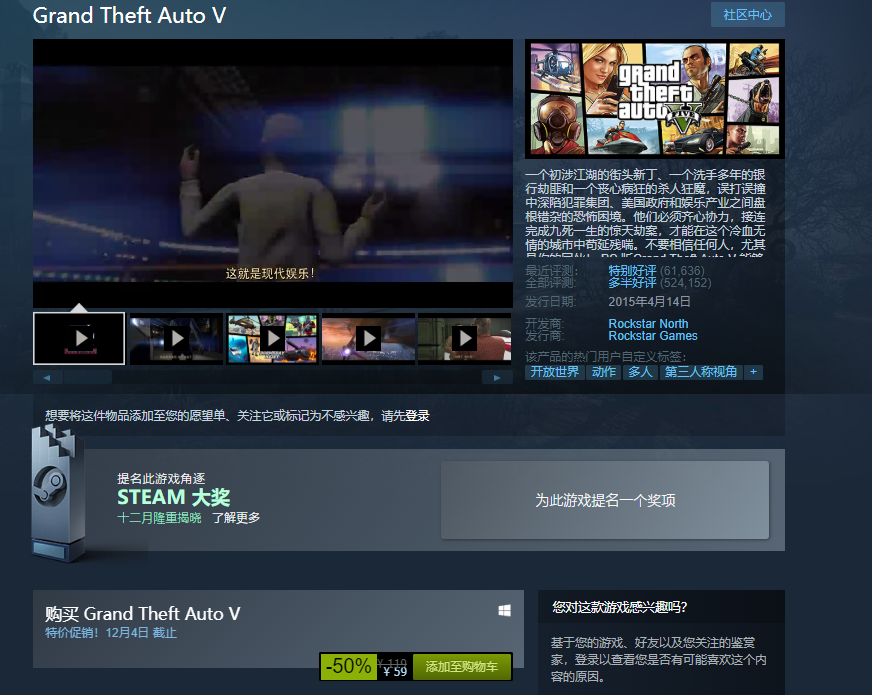 2. 90% of the pirated tickets will be reissued. What impresses you is the quality of wizard 3 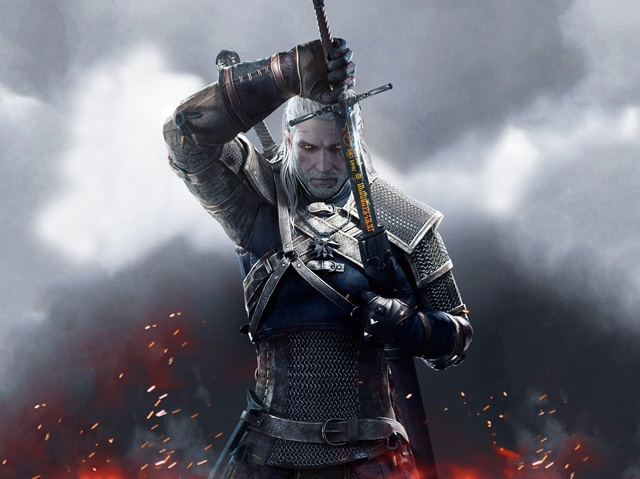 3. We work in the dark and serve the light. Assassin's Creed series 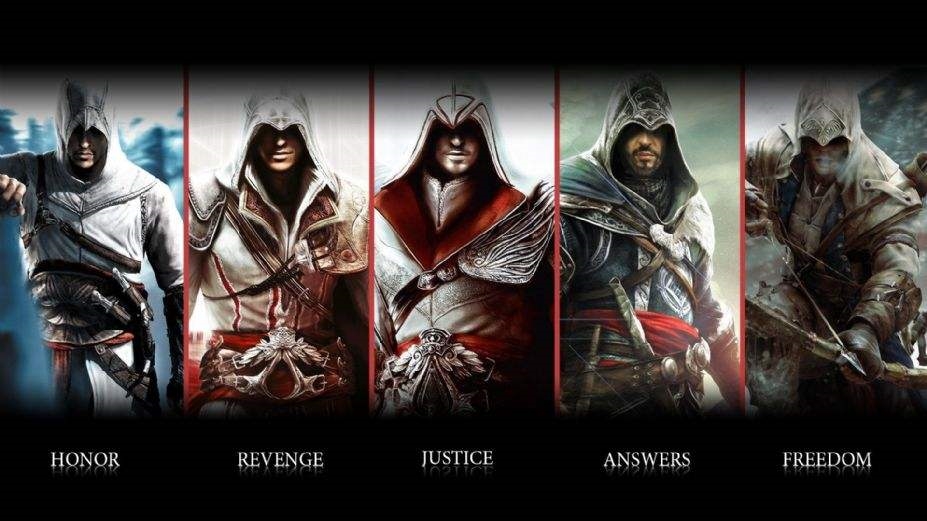 Assassin's Creed series, a series of games accompanying the growth of many players, has brought us surprise, excitement, blood and excitement; has also brought us disappointment, regret and even gradually numbness; it has been brilliant and lonely; it carries a lot of memories of the players and reposes many feelings of the players. If you want to ask the assassin's Creed series whether it's fun or not, maybe the fans of the series will answer you, have played and expect! 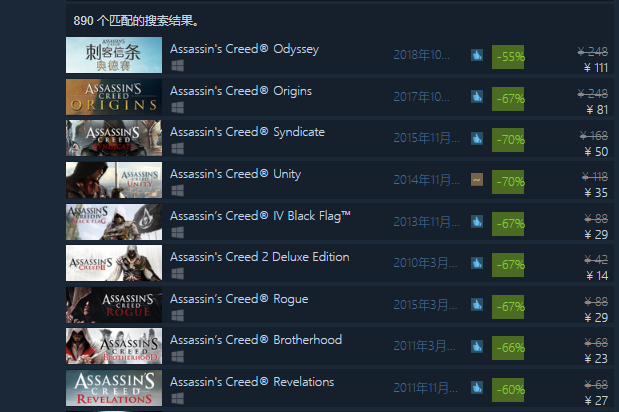 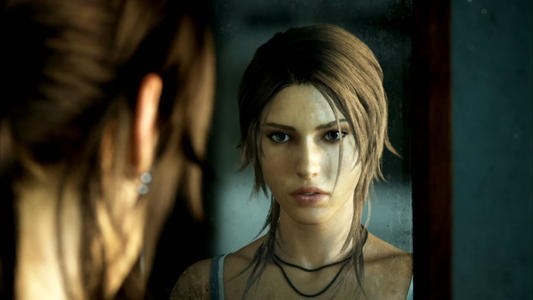 Tomb Raider is an old game IP, and Laura's little sister is also a classic game character in the game. Tomb Raider series has a history of 23 years since 2006. Since Tomb Raider 9, the trilogy after reset has a very high playability, which is one of the rare excellent games of tomb exploration and decryption. 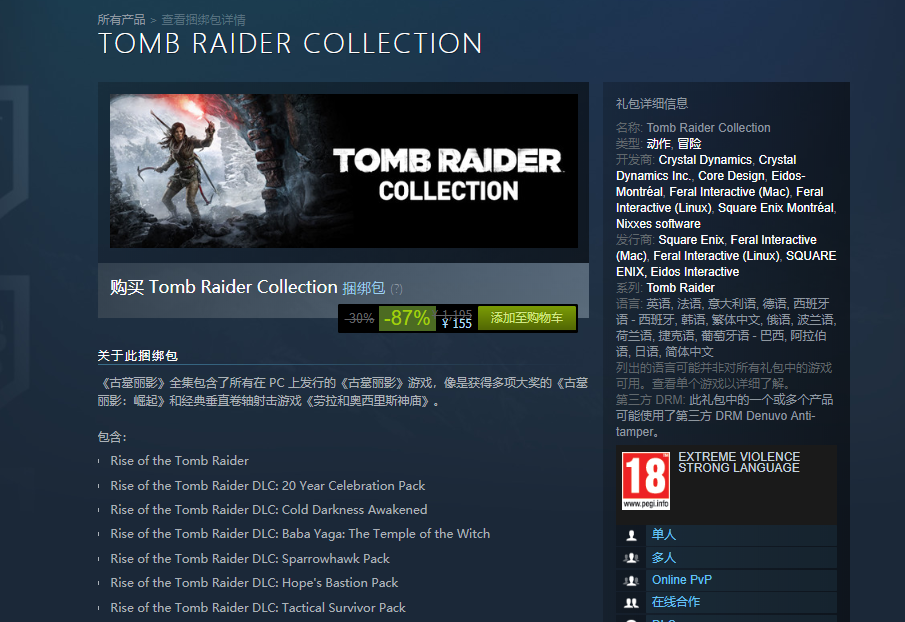 At the beginning, in addition to the steam platform, many other platforms also joined in the promotion of the black five. In recent two years, the epic platform that has just a positive relationship with steam has been on sale. In addition, several single game masterpieces released in 2019 have gained the unique share of epic. 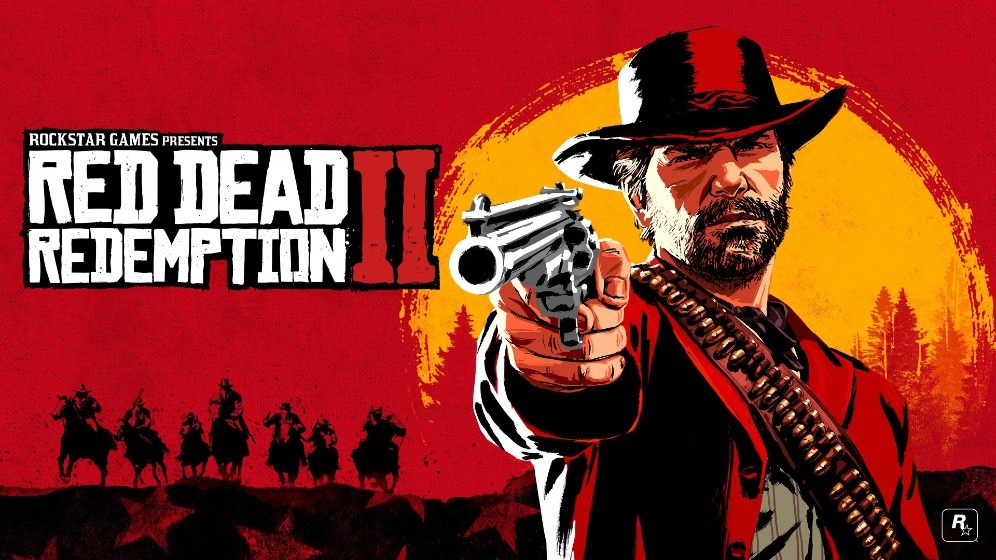 Nearly a year later, "wild escort 2" finally landed on the PC platform, earlier than expected, and was granted the exclusive privilege of starting by epic, which has not been put on the shelf in steam. The PC version of "wild escort 2" has a more realistic picture quality, which makes the players feel more immersed in the game. Naturally, the game quality is needless to say. The product of R star must be a masterpiece. Last year, the mainframe version was blown up when it was released. Although the PC version of this year had some small problems in the early stage of release due to some optimization and bug problems, after R-star was repaired in time, the problem has been solved. Or the familiar r star, or the interesting open world!

The special price of epic shopping mall in the national district of "wild escort 2" is 27.99 US dollars, converted into RMB: 196 yuan. It's only been on PC for a month, and the discount is full of sincerity. 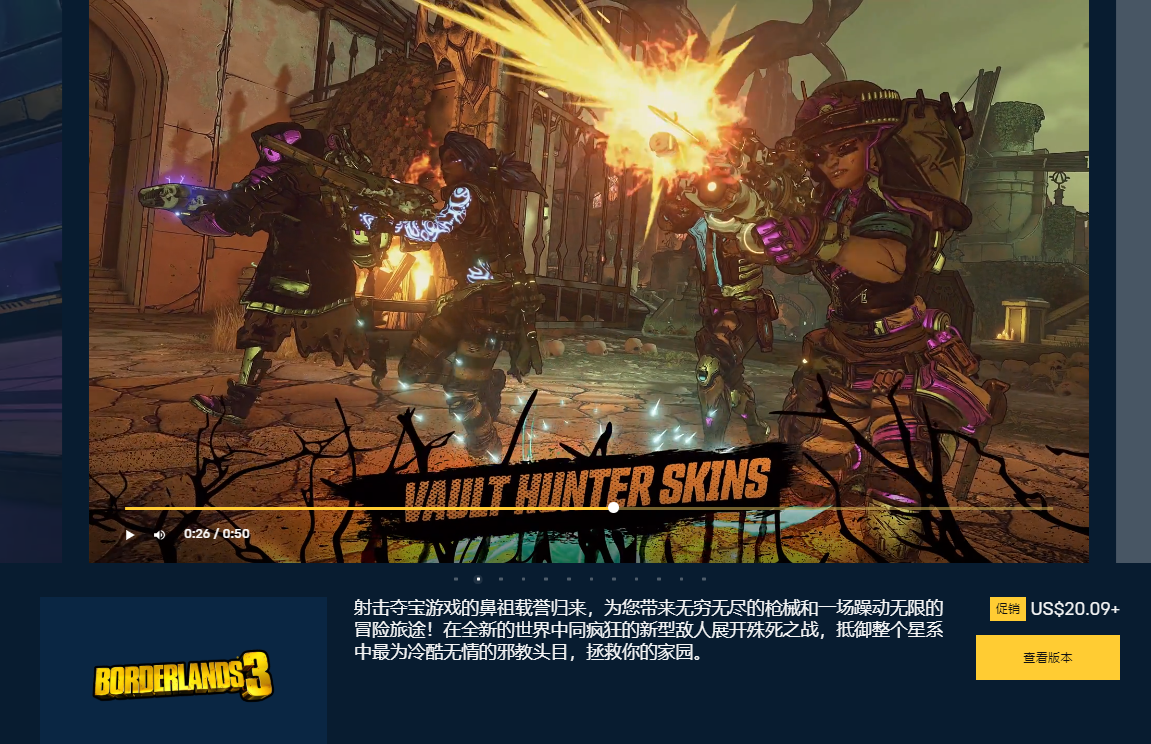 The latest works of "land without owner" series games are released by 2K games. The former works of this classic series game works are of excellent quality, while the "land without owner 3" after 7 years is more outstanding. If you have to ask how much fun it is, the sales volume has exceeded 500W in three days after the sale, and the media players are highly praised, maybe this is the best proof of its quality. Open sandbox FPS game play method, not only shooting feel is very good, but also the fun of free exploration is absolutely out of your control.

3. Radiation version of the RPG exploration masterpiece of the extraterrestrial world 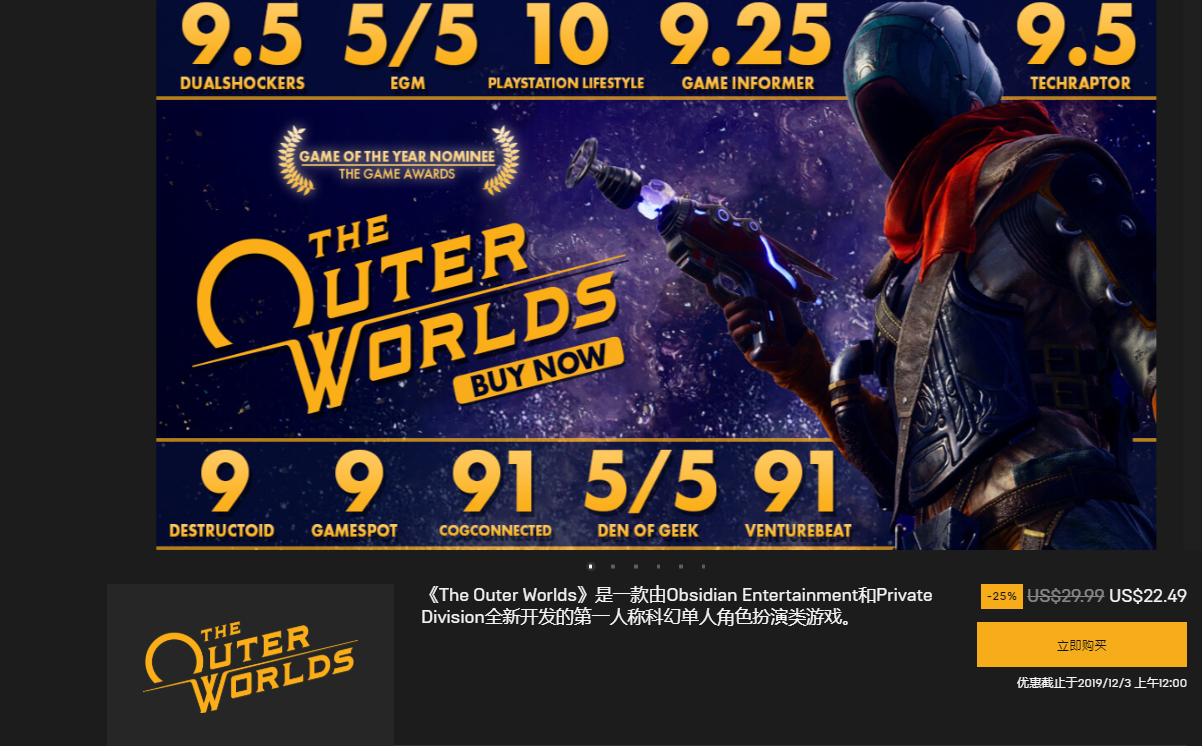 "Extraterrestrial world" is very much like an extraterrestrial exploration "radiation" game, which is created by the original team of "radiation" Obsidian studio. It is a first person shooting game. This work is excellent in scene shaping. Under the background of the extraterrestrial planet, both full of imagination and fantasy colors and modeling Aesthetics are in place. And it's full of the familiarity of the original radiation. If you are an old fan of radiation, you will be touched a lot. The setting method of multi story ending is also what Obsidian company is best at. The story trend is diverse. What kind of story trend and story ending depends on the player's own choice, that is to say, each dialogue can create multiple different consequences through your choice. Well, the outer space version of radiation, it's really great! 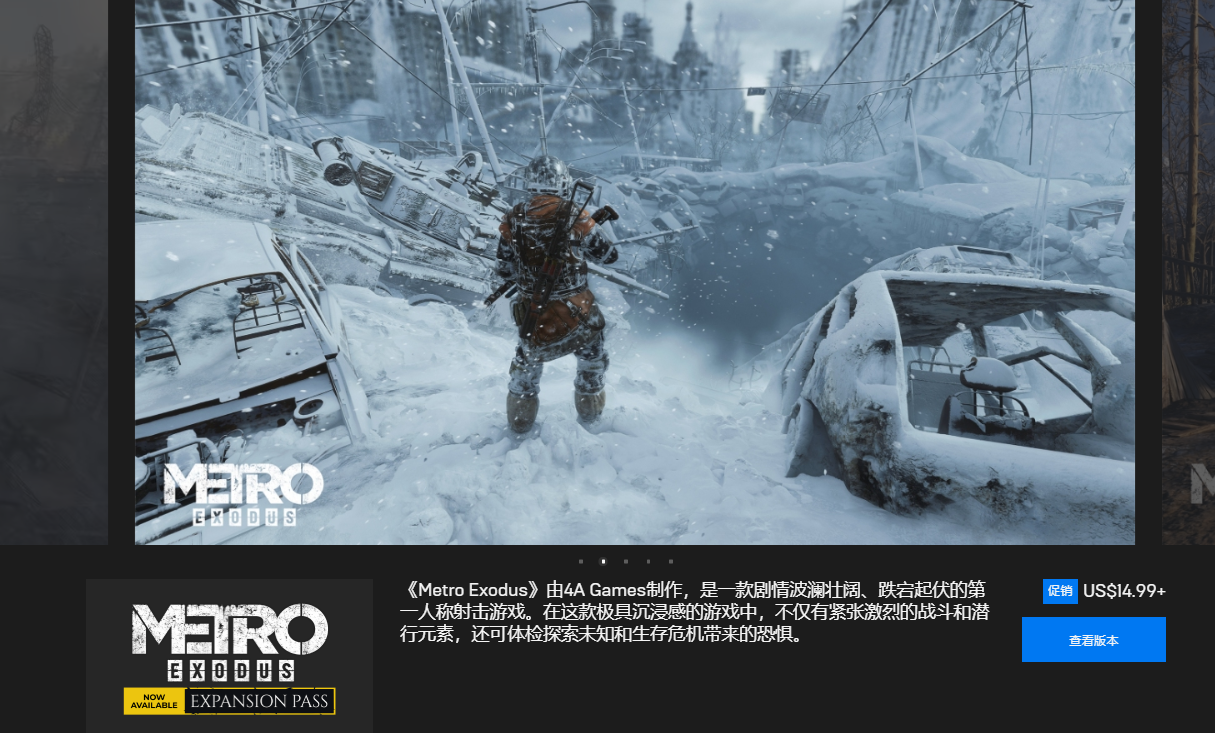 Subway: escape is not a popular game, but people who like it will like it very much. "Metro: Escape" should be the most unlike "Metro" series of games, but does not prevent it is the best "Metro" series works. Subway: Escape has a great improvement in the game screen, adding the latest light pursuit and DLSS technology. In terms of playing methods, it has carried out a comprehensive optimization and upgrade on the basis of inheriting the style of the series of works, and highly restored the inherent characteristics of the series. In terms of story narrative techniques, it is promoted by semi open exploration of story play, and every detail is handled in place. Players who like to explore and experience the story are still worth playing.

Battle.net platform also has a great work this year, "call of duty 16: modern war". The restart and production of this modern war series have been widely praised after sales.