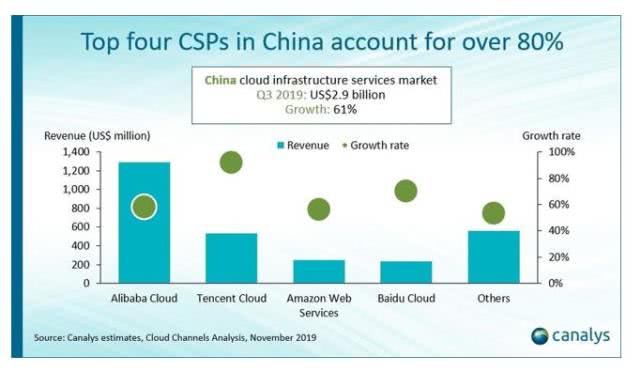 On December 2, canalys, a market research organization, released the latest data report on China's cloud computing infrastructure spending. According to the report, in the third quarter of 2019, Tencent's cloud sales increased 91.6% year-on-year, with a market share of 18.6%, the fastest growth among the five cloud service providers.

According to the Q3 financial report released by Tencent on November 13, Tencent's single quarter revenue is 4.7 billion yuan, more than 50% of the total revenue in 2018. According to the financial report, the increase of Tencent cloud revenue is mainly due to the increased use of existing customers, as well as the expansion of customer base in education, finance, people's livelihood services and retail industry. As the fastest-growing cloud service provider, Tencent cloud's annual revenue in 2018 was 9.1 billion yuan. In the past four years, Tencent cloud's revenue scale has maintained three digit growth.

Behind the rapid growth of performance, Tencent cloud is speeding up the construction of self-developed technology system from the infrastructure layer to the application layer, with more diversified product structure. Meanwhile, with C2B as the starting point, Tencent cloud is actively expanding the development opportunities of industrial Internet. In the third quarter of 2019, Tencent cloud won many awards in government affairs, finance, culture and tourism, industry and other fields, and its ability of comprehensive solutions has been significantly improved.

Wong Yih Khai, senior analyst at canalys, said that driven by the demand for artificial intelligence services, the market demand for cloud computing infrastructure services in China continued to grow rapidly. According to canalys report, in the third quarter of 2019, China's total expenditure on cloud computing infrastructure (i.e. market size) increased by 60.8% to US $2.9 billion. In this quarter, China's cloud computing market accounted for 10.4% of the global total, becoming the second largest market after the United States.

Related news
Canalys: Q3 Tencent's cloud growth rate is 91.6%, the fastest among the five cloud service providers
Canalys: last year, Amazon ranked first in the global smart speaker Market with 29.9%
Canalys released the second quarter data of domestic mobile phone market: Huawei's market share was 44%, and Apple's growth rate was the first
Canalys: 278 million 5g smartphones to be shipped in 2020
Tencent Q3 financial report: Tencent conference users exceeded 100 million, cloud business accelerated benchmarking
Canalys released the second quarter China Cloud Computing Market Report Bath Sitting in China Four Clouds
Canalys: Apple shipped 21.5 million units domestically in q4
Canalys: Apple's iPhone shipments in North America grew 19% in q1 to reach 51% market share
Hot news this week
China has found 35 known cases of the new zoonotic virus Langya
Losses in a single quarter of $ 23.4 billion a record, SoftBank did not carry the plunge of technology stocks and the devaluation of the yen
The prevention and control of the American Monkey epidemic has failed. What should I pay attention to?
Is the micro -business headache? WeChat friends are suspected to have a big move: 7 can only be posted a week
Kuaishou launched a self-developed cloud intelligent video processing chip: The chip has been streamed successfully
The new product of Xiaomi MIX is coming: both internal and external dual -screen has been upgraded to make up for the previous generation.
A new zoonotic virus, Langya, found in China has not yet been confirmed to be transmitted from person to person
Ministry of Public Security: Single telecommunications network fraud continues to cause 40 % of all electrical fraud cases
Special price "kill ripe"? Bike-sharing platforms have different prices for the same package for different users
A tech company in Shanghai has been fined 220,000 yuan for swiping orders to improve its ranking on Yelp
The most popular news this week
Yuyuki Kobayashi joins NetEase game! He worked on Devil May Cry 4 and Resident Evil 4.
Cyber violence governance needs the concerted efforts of all sectors of society
WeChat releases a new specification for the public account avatar setting, and the official news reminder is prohibited
After the U.S. chip bill takes effect, the manufacturer's snatching subsidy war is even more intense
Thousands of flights in the United States are delayed or canceled: User collapse extreme weather is frequent
Off the shelves one after another! The Sogou search App followed in the footsteps of Sogou Map
Xiaomi MIX flagship top with price reduction: consistent with the price of 12S Ultra
Semiconductor industry burst! Us Orders' Mother of All Chips' banned
Tesla suddenly accelerated out of control into a wall tragic: the owner of the right pedal and drive assistance
Lei Jun was splashed with cold water