For windows insider members of fast and slow channels at the same time, Microsoft today launched the windows 10 build 19035 version update. This version update is closer to the RTM version of windows 10 version 2004, which means that Microsoft has put the development work on 20h2. 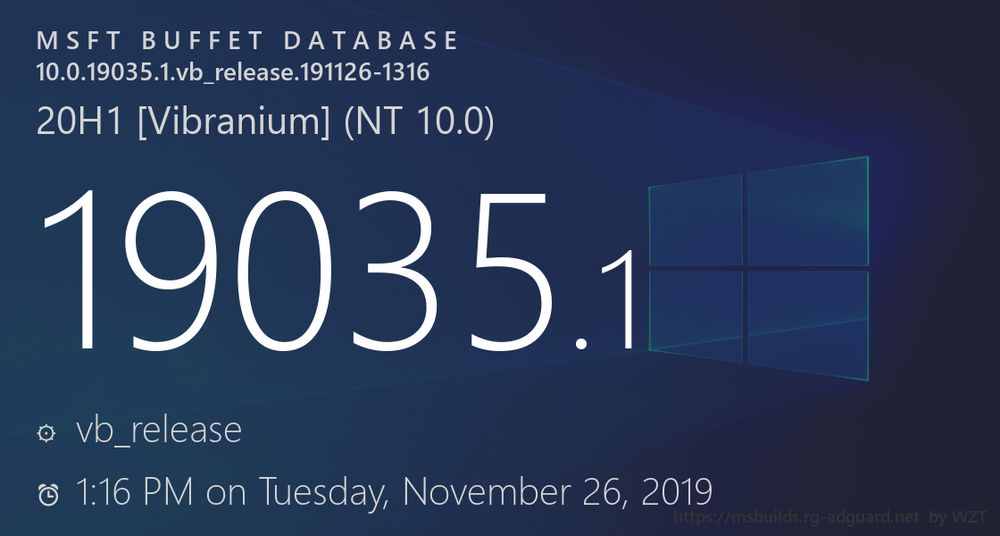 In the update of windows 10 build 19035, a significant change is that Microsoft no longer moves Notepad to Microsoft Store. Microsoft plans to migrate notepad and other core applications to the Microsoft Store for faster updates.

Thank you for your feedback on the store version of Notepad. At this stage, Microsoft has decided not to provide this function to users. Members of windows insider may have noticed some changes, and Microsoft has removed this adjustment in this version.

If you previously fixed Notepad to the taskbar or start menu, you need to re fix it after upgrading this version

If you have set some file formats to open with Notepad by default, you will be prompted when you try to open this type of file again after upgrading this version, and you need to reselect Notepad.

● this version no longer displays the version watermark in the lower right corner of the desktop. But that doesn't mean Microsoft has done it

Microsoft has completed an experiment on how to drive updates through Windows Update distribution. The devices involved in the experiment will no longer display Settings

● Microsoft has resolved a problem that may cause the fingerprint (if enabled) to sometimes not be available as a login option after waking the device from sleep.

● Microsoft has solved a problem that may cause some apps to fail to start the first time they attempt to start after resetting the app through settings.

● due to the adjustment of some insider preview versions and some battleye anti cheating software versions in the operating system, battleye and Microsoft found incompatibilities. To protect insiders who may have installed these versions on their PCs, Microsoft has applied compatibility reservations to these devices to prevent affected versions of windows insider preview. For more information, see this article.

● some insiders report that when trying to install the latest version, the installer rolls back and returns error code 0xc1900101. In some cases, the update completed successfully in subsequent attempts. If you encounter problems, make sure to submit feedback in the feedback center.

● Microsoft reports that the update process was suspended for a long time when investigating the installation of the new version.

● Microsoft is investigating reports that some external USB 3.0 drives did not respond to start code 10 after connecting.

Related news
The Windows notepad has now been put on sale in the Microsoft Store (chart)
New windows is coming! Microsoft Windows 10x details
Windows 10 build 19035 release: suspend Notepad distribution for store (Figure)
Hot news this week
Wechat has not done this function for N years! Use this app to make up for the defects of wechat
Gree's response to "being disqualified from winning the bid": a mistake made by the bidder in sorting out the materials
IPhone 12: it's more like throwing away the charger
Apple wants to know: what do you do with the charging head of the old iPhone?
Luo Yonghao comments on ideal one: Tesla Model 3 is not a car of a level at all
A 400-brand evacuation Facebook： the internet giant strangled?
ASUS main board leads Rog day fans Carnival highlights
How long can "Laoganma" carry on after winning Tencent?
The dotcom bubble? U.S. technology stocks surpassed their 2000 highs relative to the S & P 500
Tesla's warranty service suddenly shrinks: touch screen and media control unit halved to two years
The most popular news this week
6.6 billion domestic mobile phone number has been cancelled! Chairman of sailin automobile's first response after going to the United States
Samsung Galaxy book s, the inspiration carrier of China Mobile
Cellon 865 release Meizu: change too fast, continue to polish Cellon 865
Apple intends to raise its price! IPhone 12 requires full line standard OLED screen
Volume only 1 L Lenovo release P340 microhost :64 GB memory 2 solid state
Ps5 / xsx host: no mid-term upgrade style
After Ancestral fingerprints return to Google pixel 5 exposure: digging screen / snapdragon 765G
The surface duo will be equipped with Android 10 and is trying to pass Google's compatibility test (photo)
Italian media said the government was considering abandoning Huawei 5g
serious shortage big price increase! NVIDIA、AMD graphics cards togethe