Four times, he was interrupted by wechat backstage, but he could not stop his passion for transferring money to cheaters

Lin Wu works as a sailor on an oil transport ship. He is still single at the age of 30 because he has been on the ship for a long time. On the morning of November 1, Lin Wu added a netizen nicknamed "really beautiful" through wechat after work,Lin fei'er, 28, is divorced for half a year and runs a dance yoga training shop in Futian, Shenzhen. 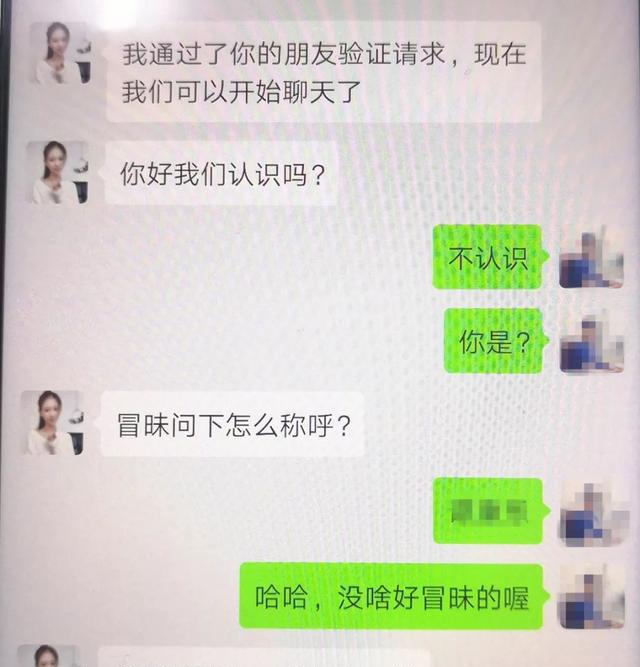 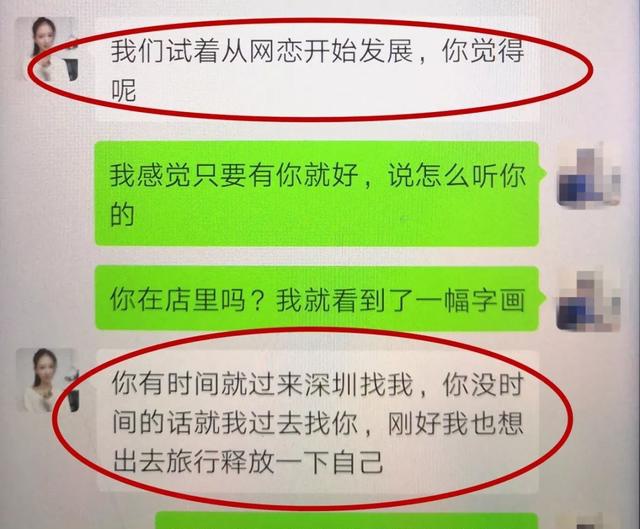 "It's my birthday after 12 o'clock tonight. If you could be with me now, how happy you would be."On the evening of November 4, Lin Wu received Lin fei'er's wechat, which made a ripple in his heart. 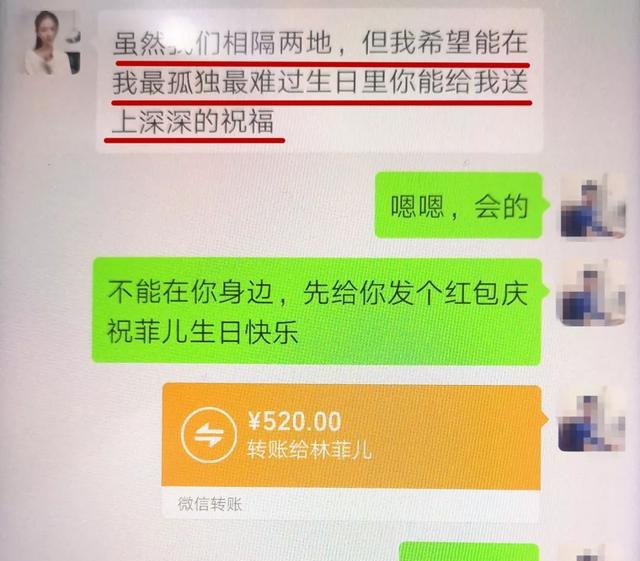 "At that time, the other party did not respond to me, and the money transferred by wechat was not received."Afterwards, Lin Wu said that he thought Lin fei'er didn't receive the money, which showed that the other side really liked him.

What Lin Wu doesn't know is that it's just a trick set up by a liar to cheat for more money and fish with a long line.

"Would you like to live with Phil?"At about 9:00 on November 5, Lin Feier sent a wechat to Lin Wu.

"Of course I will."Lin Wu said that seeing this wechat, he felt that he was the happiest person in the world.

"Then can I have a 3344?"See the time is right, Lin fei'er begins to ask Lin Wu to transfer money.

Lin Wu has been confused by "love" for a long time. Without much thought, he immediately used the wechat transfer function to start the transfer operation of 3344 yuan. 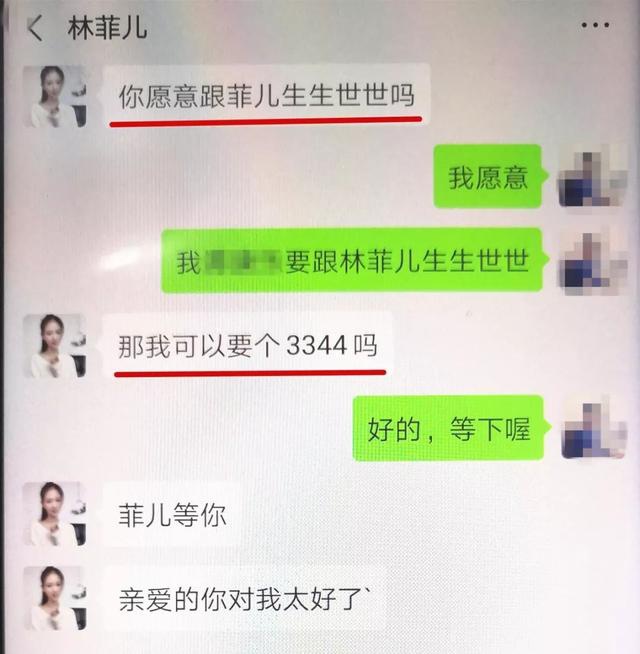 "There is a risk in the transaction and this operation has been interrupted for the sake of your capital safety."At this time, the wechat background stopped Lin Wu's transfer operation and sent him a risk reminder. 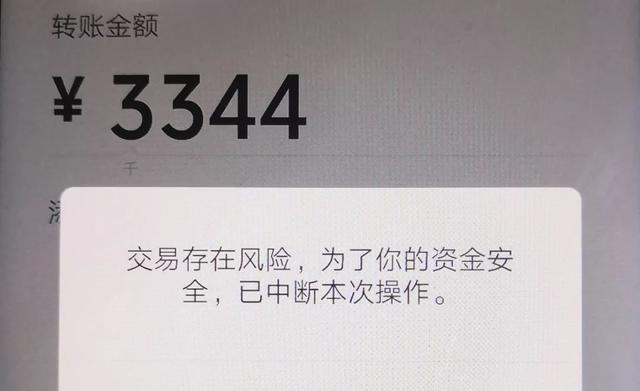 "Why not?"The Risk Reminder didn't wake up Lin Wu's vigilance. He sent the screenshot to Lin fei'er and asked why he couldn't transfer money.

"Then transfer it to my uncle's brother, who will transfer the money to me."At this time, Lin fei'er sends Lin Wu a QR code and asks him to scan the code for transfer. 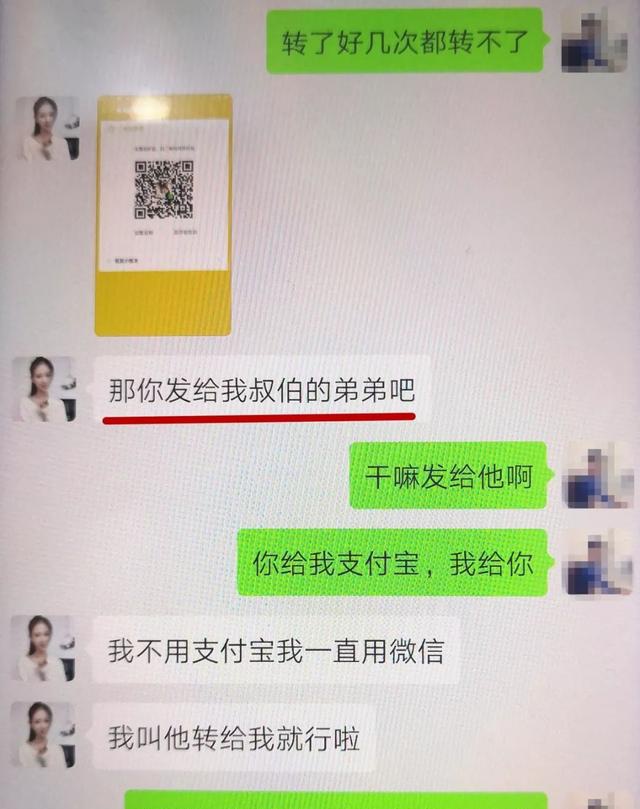 In the process of code scanning transfer, the wechat background stopped Lin Wu's transfer and sent a risk reminder again.

But unfortunately, Lin Wu, who was immersed in love, didn't take it seriously at all.He took another screenshot and asked Linfield why.

In fact, the swindler's wechat account is limited by the official background of wechat because of frequent transfer, but this has not attracted Lin Wu's attention at all. 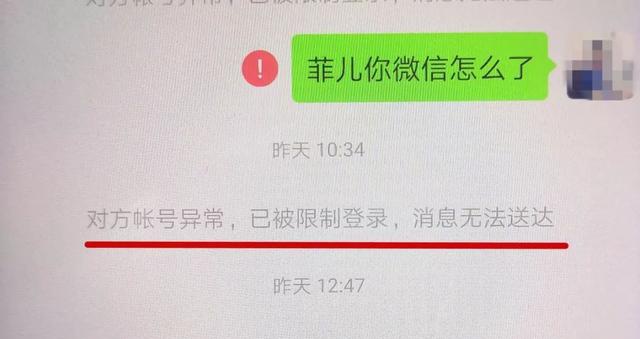 "The other party's account is abnormal, and login has been restricted. The message cannot be delivered."

At about 10:00 on November 5, when Lin Wu chatted with Lin fei'er via wechat, he found that the news couldn't be sent. At the same time, the official background of wechat sent him another reminder.

But Lin Wu had been blinded by "love" for a long time and didn't realize the risk at all.

Racking his brains, Lin Wu thought of the QR code of the previous transfer.

"Do you know Phil? I can't reach her. My phone number is... "Lin Wu swipes the code, transfers 3 yuan to the other side, and tries to leave a message "find Fei Er". 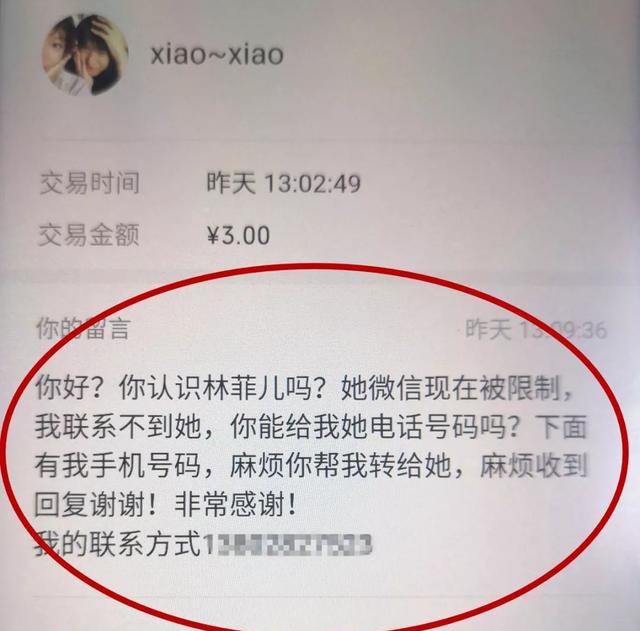 "Her other micro signal is XXXXXX"One and a half hours later, the payee replied to Lin Wu,

Lin Wu quickly adds the wechat provided by the other party as a friend. 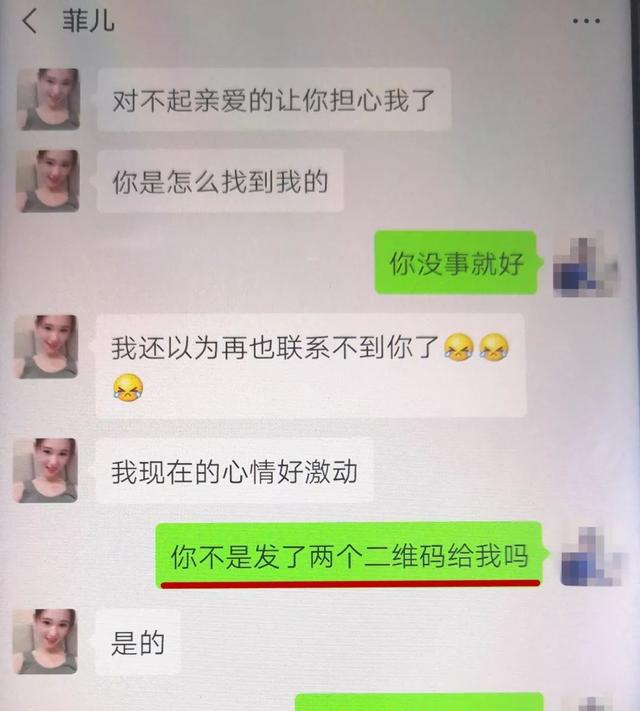 "Honey, the money will be returned to you then."During the chat, Lin fei'er told Lin Wu this way.

"It's OK. I'm afraid I'll lose you if I have no money to earn."Lin Wu tells the other side. 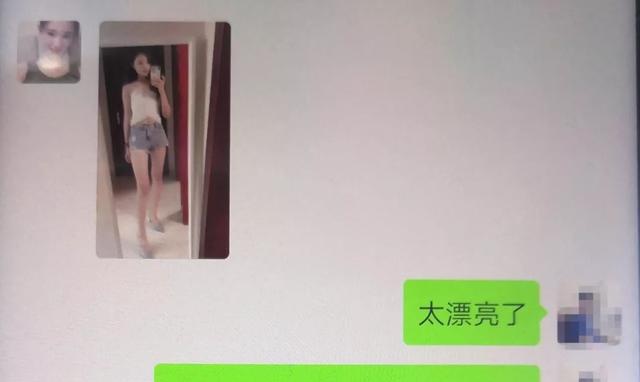 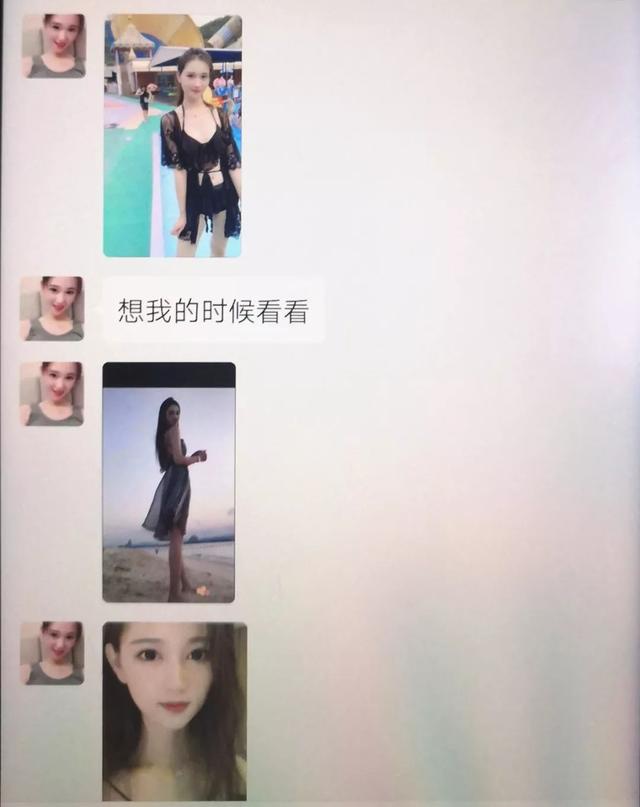 "Would you like to send me a 5200?"Seeing Lin Wu's initiative, Lin fei'er asked him to remit money again.

As last time, although the wechat background reminded me many times, Lin Wu still collected the money by scanning the QR code.

At this time, Lin Wu didn't have so much money, but in order to please his lover,After he borrowed 4000 yuan from the Internet, he collected 9999 yuan and remitted the money again by scanning the code.

"I really don't have any money now. I'll remit it before I get paid?"Lin Wu said that he could not raise money 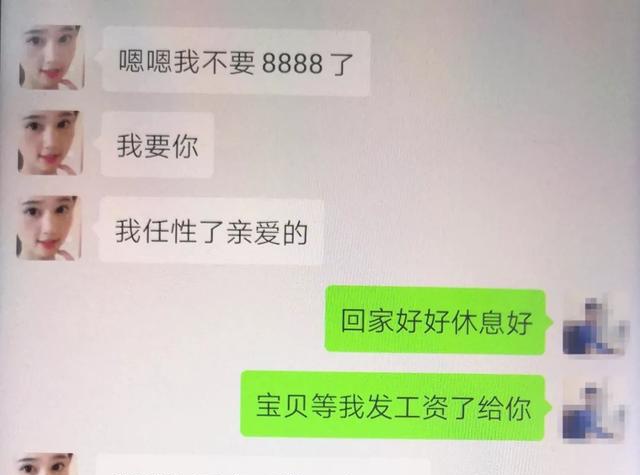 However, when Lin Wu contacted Lin Fei via wechat on the morning of November 6, he found that he had been blackmailed by the other party. 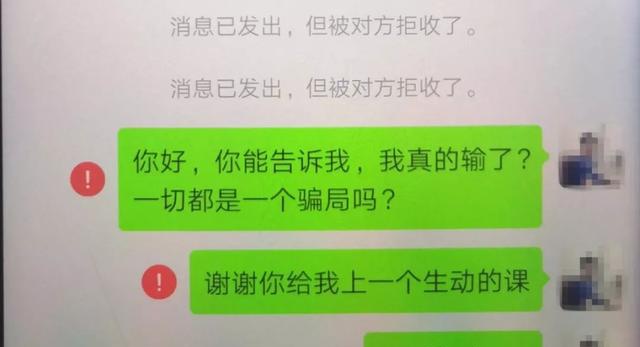 Finally, seeing that Lin Wu has no room to continue to squeeze, the cheater directly pulls it black. Poor Lin Wu does not wake up until this time.

In this case, Lin Wu's loss could have been avoided, but he was trapped in a "sweet trap" and ignored the risk warning.

In such scams, cheaters oftenMake up one's identity, play one's role, falsely claim to be successful in one's career, but the love road is bumpy and the emotion twists and turns,Looking forward to finding a reliable life partner. They contact the victims online in the name of making friends and falling in love,After deceiving the trust, the victim's money will be drained for various reasons.

What we should do is to improve our awareness of self-defense. When encountering unusual enthusiasm and short contact time, the person who actively requests to establish a relationship needs to be vigilant, keep his or her normal heart and guard against the trap behind sweet talk.

Related news
DO U ALWAYS GET MONEY BUT WONDER HOW IT VANISHES CALL ON +27
Money Spells to Attract Money Instantly +27836633417
+2349025235625 I want to join occult for money
+2349031459947 %%π¶ I want to join occult for money ritual
+2349031459947 ## Where to do money ritual in Nigeria....
Hot news this week
13-year-old Chinese hacker capture a big Bune APP 3.5 billion users were sentenced: official response
Huawei applies for "Daxie" trademark, which has been applied for trademarks such as Cangli, Pangu, Luban, Hongyi
20 new e-commerce platform enterprises released the "China's new e-commerce industry healthy development initiative"
Buy chips on the black market at 800 times the price? Ideal Car denied that it had previously been exposed to a shortage of radar chips
Market Supervision Bureau: Improve the standardization of e-commerce main body
Director of the State Post Office: China will achieve the establishment of village express direct investment within three years
More than 550 suspects have been arrested after police cracked down on a gang known as "Ditui", which maliciously registered and sold online accounts
Is the card slow after upgrading Win11? Win11 has performance issues: Teach you to fix them
Net-a-world Liu Chuanzhi annual pension of 100 million yuan, Lenovo Holdings dispelled rumors: serious misrepresusion
Huawen: Increase IPv6 + Technology Innovation Helps my country's continued leading the next generation of Internet innovation
The most popular news this week
Transsion Infinix Note 11 series release: Equipped with Mediatek Helio G96 chip support 120Hz high brush
Another overtime route? Tencent announced that employee dinner was free and that it would be reimbursed for taxis after 10 p.m
Apple's "fake donation" has been trending. Is there any information on the donation claimed by Apple?
China Xinxong Institute: "Star Fire · Chain" master chain completed and EtherCoufi cross chain interoperability
Xiaomi appointed Li Xiao Shuang as a vice president of Xiaomi Motor, CFO Lin Shiwei, and the CEO of Stars
Meizu and SONY Xperia reach strategic cooperation: Flyme will provide app adaption for SONY phones
iPhone13 or reduction of 10 million depreciation of chip shortage: Apple supplier is denyed
Google releases Android 12: Hardware standards OEM response
"Jinshan drug bully" was interviewed by Beijing Cyberspace Administration
Google's Pixel 6 series uses Snapdragon chips instead! Qualcomm voice