Although some domestic companies strive to replace x86 with processors such as arm as their own controllable choice, as AMD CTO said, x86 is irreplaceable, and a large number of codes and software accumulated over the years are doomed to such a result.China is also actively developing its domestic x86. In this respect, there are two companies, Haiguang and Zhaoxin. The former is AMD Zen technology licensing, and the latter is cooperating with via. At present, it has entered the stage of independent development.

Two days ago, megacore announced its x86 processor development plan, mainly involving two products. One is the kh-4000 Kaisheng series processor, which is scheduled to come out in 2021. It has a new independent CPU micro architecture design, based on the 16nm process, and continues to use the SOC scheme. The number of CPU cores of a single processor is four times that of the existing Kaisheng kh-30000 series processor. Meanwhile, kh-40000 will continue to support two-way interconnection, i.e. up to 64 cores in the system, DDR4 memory and PCIe 3.0.

This processor is the follow-up model of kh-3000 series at present. The latter has used 16nm technology and 8-core architecture, with a frequency of 2.7ghz, and supports AVX / SSE 4.2 instruction set.

Many readers don't understand that kh-4000 is still using 16nm technology two years later. In fact, the pursuit of KH Kaisheng series is not the ultimate performance (although the official propaganda is for the high-performance server market). The key point of kh-4000 is multi-core. According to the official introduction, it can achieve a single-channel 32-core architecture, which is the key point. In the announcement of megacore, the successor of kx-6000 series is kx-7000, and the process technology is 7Nm and below. A new independent CPU microarchitecture will be adopted, and the SOC design scheme will be continued,The integrated graphics card supports directx12. In terms of memory, USB, PCIe and other specifications, it will also aim at the international mainstream level in the same period. 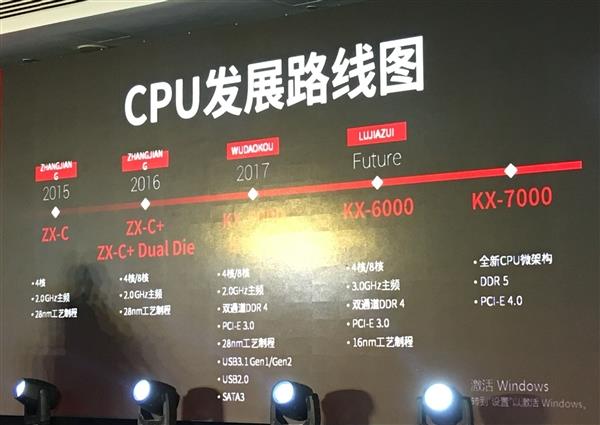 But don't forget that the single core frequency of AMD and Intel processors has generally reached 4.5-4.9ghz, which is higher than the kx-7000 of 2GHz. The calculated average is 2GHz. The IPC performance of kx-7000 can almost reach 80-90% of that of core and sharp dragon 7, which is a great achievement.

Overall, in addition to developing the CPU architecture, the challenges of the KX-7000 family are the most difficult manufacturing processes, and that is progress. Officials did not mention the timing of KX-7000 this time, depending on the situation before 2021 should not be possible, when the 7nm process 4-8 cores, 4.0GHz above, then there is no pressure to replace most X86 processors, especially some government and enterprise markets, industrial markets, and so on.