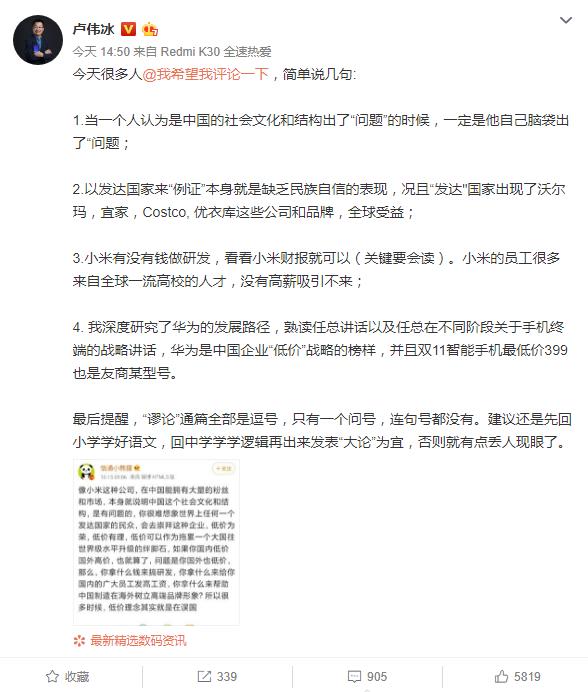 Lu Weibing said“Take the developed countries as an example, which is a sign of a lack of national self-confidence, and "developed.""

As for Xiaomi's research and development, Lu Weibing said that he could read Xiaomi's financial report (the key is to be able to read it). Xiaomi's employees are many talents from the world's first-class universities, who can't be attracted without high salary.

Lu Weibing's anger has been praised by netizens, and Xintong panda has deleted this micro blog or made it visible to itself. What do you think about this?

Related news
Lu Weibing's Talk about Redmi and Mimi's "Left-right Interaction": A Comparison of Walking After a Long Time
Lu Weibing's reply to Yu Chengdong: Is it worthwhile to sell more than 10,000 foreign license plates on mobile phones?
Millet's low price misses the country? Lu Weibing: developed countries also have Wal Mart, IKEA and UNIQLO
Hot news this week
Yao Ting, a "gifted girl" who won Huawei's 1.56 million yuan annual salary, responded: what does salary not mean
Qualcomm lobbied the US government to lift the ban on the sale of components to China
Tencent re racing e-commerce, but does not want to make the next pinduoduo
Tencent's response to wechat ban issued by the United States: under evaluation
HP shadow Genie 6 top equipped with sharp dragon version: the highest graphics card is still RTX 2060
Xiaomi 10 supreme commemorative edition press conference Lei Jun's live rehearsal
Wechat in Apple's Google App store may be banned. What if wechat can't be used on iPhone
Ali 88vip bought value: you can get Netease cloud music black glue annual card for free
Tencent launched the largest school recruitment in history, and these positions are most popular
The United States blocked tiktok and wechat one after another: This is the real purpose!
The most popular news this week
The latest statement by the founder of SMIC: the ability of the United States to restrict China is not so strong, but it should not be taken lightly
Don't do the next TikTok Zoom Give up China and choose India
Google: making 34 billion dollars a year can't stop the middle-aged crisis
Xiaomi 10 supreme commemorative version DxOMark results announced: 130 points won the first place in the world
Xiaomi's "black light factory" exposed: fully automated production of one million mobile phones a year
Lei Jun personally promised: surging chip did not give up!
120W wired, 50W wireless second charge: Xiaomi 10 supreme commemorative edition 40 minutes full
The Enlightenment of Microsoft's 28 year "Chinese style survival"
16GB memory, 120W second charge, 120Hz screen Xiaomi 10 supreme commemorative edition debut
Can SMIC get rid of American technology? Officials are speechless