The video memory is 128 bit wide, 4 / 8GB gddr6 is optional, the equivalent frequency is 14ghz, and the thermal design power consumption of the whole card is 130W. 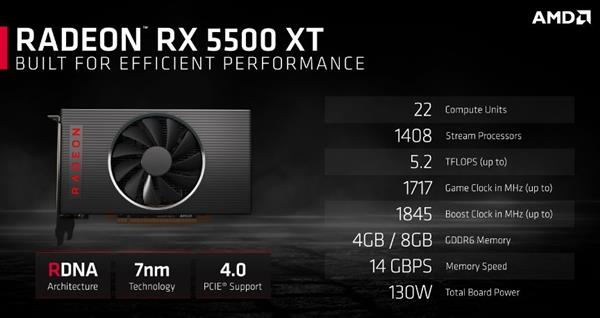 The Navi 14 core of Rx 5500 XT was agreed to use 7Nm, but amd didn't release specific information. Previously, it was speculated that it would continue to be commissioned by TSMC's 7Nm process, but today, fudzilla revealed that Samsung might commission the Navi 14 GPU chip of Rx 5500 XT graphics card.

However, they can't confirm which Navi 14 Samsung has commissioned, because there are many products in the RX 5500 series. In addition to the RX 5500 and Rx 5500 XT, the desktop version also has a complete version of the radeon Pro 5500m with 24 groups of Cu units, and many of this core is supplied to Apple's MBP 16 inch notebook.

If AMD is really looking for Samsung to manufacture 7Nm GPU chips, it's not hard to guess the reason. Either Samsung offers a lower OEM price, or TSMC's 7Nm production capacity is tight. The latter is more likely. At present, some models of AMD's 7Nm sharp dragon and Xiaolong processors are not available. After the GPU chip model is expanded, the production capacity will be even tighter.