The shadow behind Amazon Logistics:The first CFO was killed by its own delivery vehicle.

In the winter of 2010, a blizzard in the uk brought royal mail's delivery service to a standstill, forcing large numbers of christmas day gifts to be delayed. Amazon executives on the other side of the ocean, aware of the postal crisis, decided not to attach themselves to other logistics companies but to build their own logistics delivery network, which was better than Amazon's previous collaboration

In the six years since 2013, Amazon has established a large-scale, efficient and fast logistics system in the United States from scratch. But like both sides of a mirror, the other side of rapid expansion is "haste is not speed.".

On December 23, a nonprofit media agency investigating abuse of power

Accidents that have been "hidden" for six years

Just six months after the establishment of the logistics network, Amazon had its first accident that hurt people's lives.

On September 18, 2013, a truck carrying an Amazon package hit and killed a cyclist on the outskirts of San Francisco. This truck is not Amazon's official distribution vehicle, but belongs to ONTraC, a transportation contractor. In order to quickly develop the logistics network and control the cost, Amazon outsourced the transportation link to low-cost contractors, so as to control the link from storage to delivery to home.

Coincidentally, this unfortunate passer-by is exactly joy covery, Amazon's first chief financial officer. She joined Amazon in 1996 and persuaded Wall Street to believe in the company's vision during the company's total loss. After leading Amazon's successful IPO, covery left in 2000 and became a professional investor and philanthropist. Six years later, it was first reported by propublica. 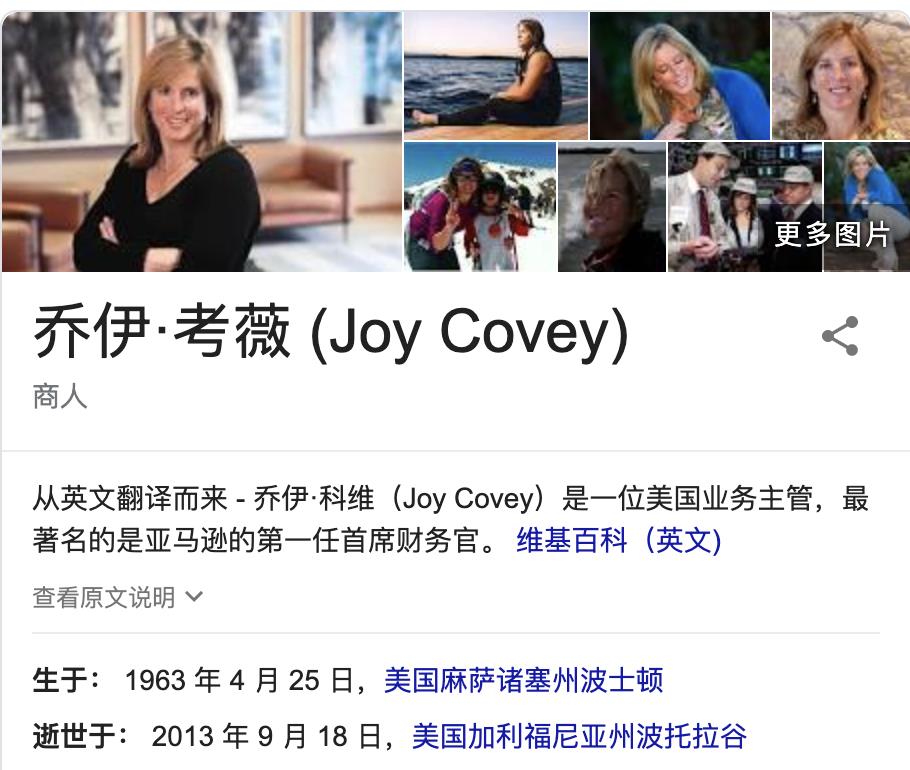 But Amazon denied, "the reports of propublica and buzzfeed are untrue. For us, nothing is more important than security. Amazon also provided a set of data: last year, the company provided more than 1 million hours of safety training for employees and logistics contractors, and implemented a total of $55 million "safety improvement project". But Amazon didn't say how many people participated in the training, and $55 million was less than two thousandths of the company's $27.7 billion in logistics spending last year.

Amazon said: "this kind of traffic accident has happened and will happen again, but these are all exceptions. Our ultimate goal is to achieve zero accidents. "

However, since this year, there have been more than 60 serious accidents involving delivery drivers in Kia Marson, 13 of whom have died. According to internal documents seen by propublica, Amazon has set up a company compensation agreement to deal with the death caused by the accident. According to current and former Amazon employees, delivery drivers and contractors, Amazon executives have repeatedly delayed or even cancelled safety training because they are worried that it will affect the delivery speed of drivers.

"How fast and good"

Amazon's corporate culture has always been in question. Among the five technology giants of faaam (Facebook, alphabet, apple, Amazon, Microsoft), Amazon is the most wolf like one. The founder pursues "customer first", "every day is the first day" and subversive culture. As the world's largest e-commerce and the world's fourth largest technology giant by market value, Amazon has been making rapid use of speed and efficiency to meet one challenge after another.

In the early days of logistics, Amazon executives discussed how to carry out security measures, one of which proposed: "give drivers more rest time and reduce the number of packages per shipment. However, the proposal was rejected by other executives, because the delivery cost of each package will be increased by 4 cents.

By the end of 2016, Amazon's logistics network across the U.S. had taken shape, and seemed to be getting closer to the initial goal of "faster, cheaper, more technical content".

But the first dangerous seeds have begun to "take root.". Amazon and its contractors clashed during the Black Friday, Christmas and new year's shopping seasons. Amazon has too much cargo for the contractor, and also expects the driver to deliver the package quickly. Amazon requires the driver to be more, faster, better and more economical, and a large number of drivers are overwhelmed, in response to resignation.

During the shopping festival, which lasts six weeks in 2018, Amazon shipped more than 1 billion packages, more than double its 2017 shipments. According to internal information, Amazon has temporarily hired 3,949 drivers in just a few weeks, many of whom have been hired directly. According to company documents and interviews, amazon quickly hired a driver with night blindness and a driver who admitted to "using marijuana for medical purposes ".

To improve delivery efficiency, Amazon requires contractors to use an app called rabbit to scan packages and navigate delivery routes. Unfortunately, the algorithm is not so perfect. In the face of reality, the car often "rollover". For example, the driver is not allowed to have a rest time in the planned route, and the navigation direction is often wrong.

When the audit team evaluated the contractor, it found that some contractors did not have enough insurance for drivers or did not pay drivers legal overtime. After the audit team reported the situation to amazon, amazon turned its back on the issue and fired its head, and the team disbanded, people familiar with the matter said. In response, however, Amazon said:" This was due to problems with the audit process at the time and the team was incorporated into other organizations. The new leadership has improved audit efficiency and scope. 」

After the pioneer period, Amazon logistics network was basically formed, and security issues were put on the table.

At the end of the year, in order to welcome the holiday shopping festival of "black five to new year's Day", Amazon's internal management personnel had put forward a proposal to improve the security of Amazon's distribution network, which included a five-day driving safety course for drivers. After the course, drivers need to pass the assessment of professional organizations.

But the proposal was not put into practice. Amazon rejected the proposal internally, according to internal documents, and senior managers at amazon's logistics department say amazon doesn't conduct security training because it will stop it from pursuing the fast and economical pace. In the middle of the year, the delivery stations that were to be rectified were also a mess during the shopping season, with heavily understaffed delivery trucks and congested incoming routes and new drivers lacking safety training, but had to deal with many extreme road conditions in the winter 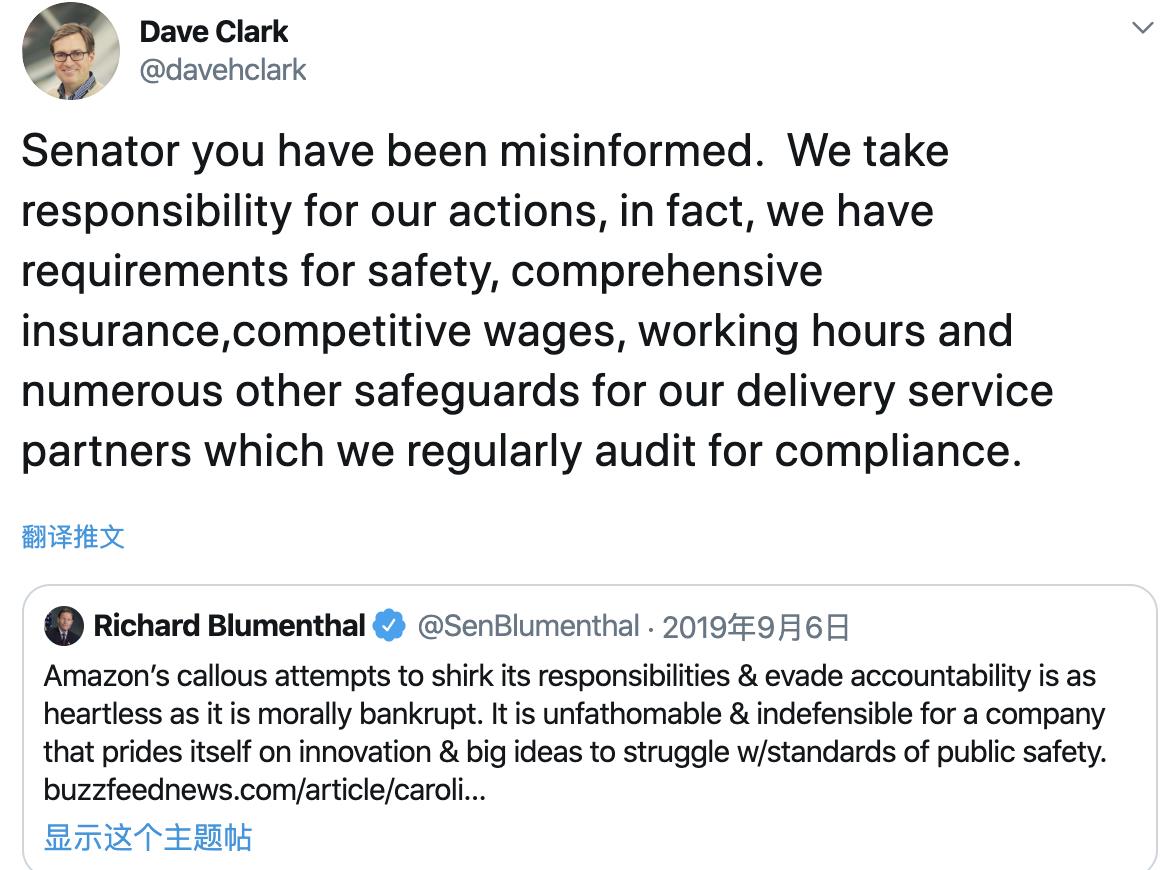 Last month, NBC reported that the "driver certification badge" in Amazon's articles of association was also in vain. People familiar with the situation, current employees and former employees said in an interview that drivers who have not passed the background investigation can also drive trucks with badges. In order to meet the company's demand for distribution volume, Amazon executives even acquiesced in this practice.

In the whole logistics process, not only the driver's safety cannot be guaranteed, according to the data of reveal and Atlantic Monthly, a non-profit news organization, the serious injury rate in Amazon's warehouse is twice that of the industry in the United States.

On the other hand, the accumulated labor costs and unavoidable human accidents have made Amazon explore the "unmanned" and "automation" of logistics.

According to wired's report in June, Amazon's own logistics system contains 40 planes and 30000 trucks. In the logistics and storage link, Amazon has laid more than 200000 robots for handling shelves, loading pallets, sorting and packaging. Scout is a part of the ground logistics of Amazon's unmanned delivery project. In addition to ground logistics, Amazon has been exploring UAV airdrop delivery technology, such as the prime air UAV developed by Amazon. 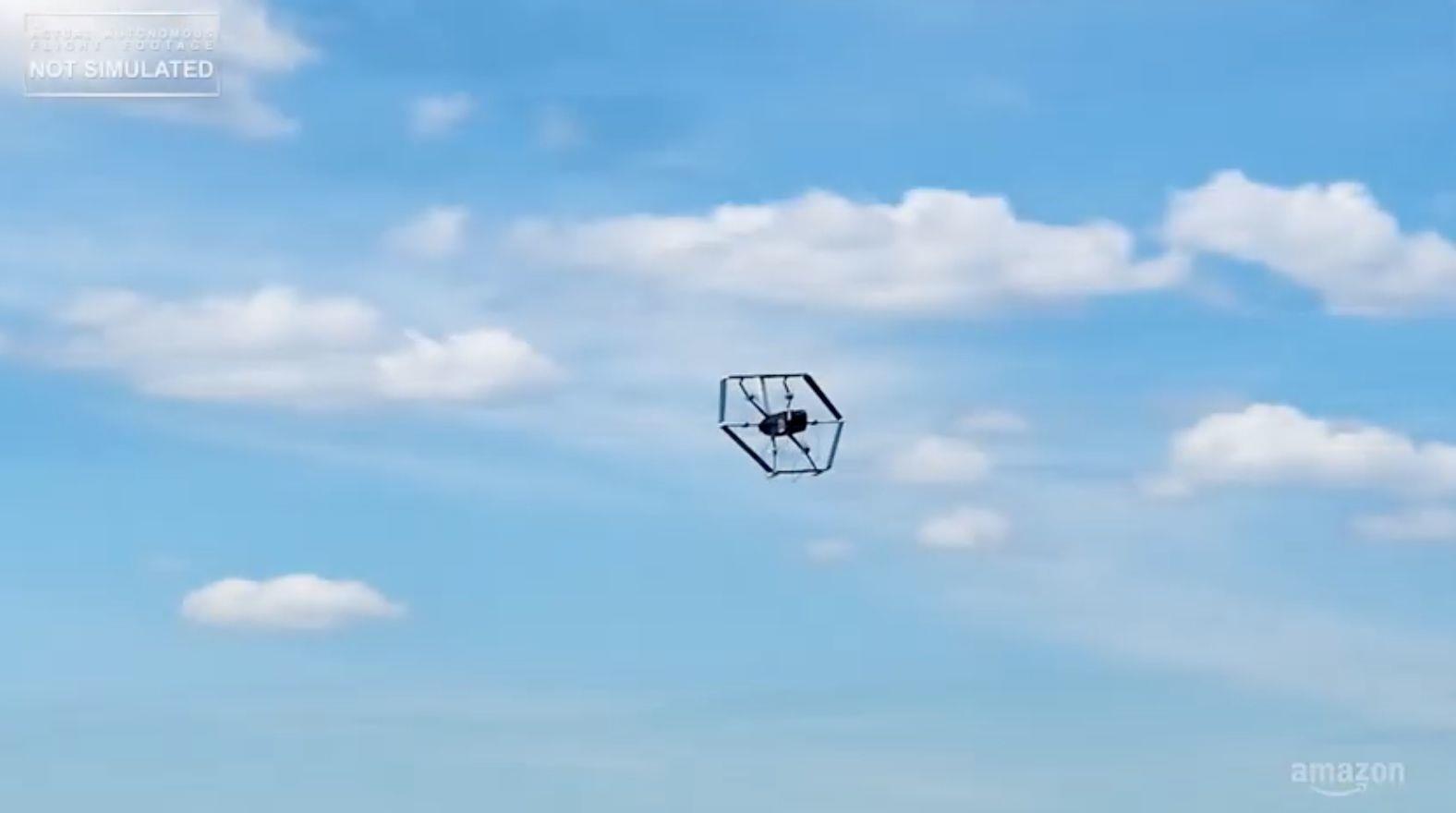 But the brilliant unmanned distribution technology doesn't mean that Amazon has uprooted that dangerous seed. At least now, Amazon still has more than 250000 logistics employees and thousands of contractors with outsourcing partnerships in the United States. How to solve their hidden dangers and protect their interests is a problem facing Amazon.

Amazon, which pursues user first, increased its investment in the logistics system in April this year, reducing the delivery time of prime members to "next day delivery".

This is obviously good news for users. But the Contractor's drivers see a different side.

"You have no lunch break. There's no time to go to the toilet. Some people urinate with bottles in the car. In order to drive faster, you have to run the red light in the community. This job is not usually done by humans. " 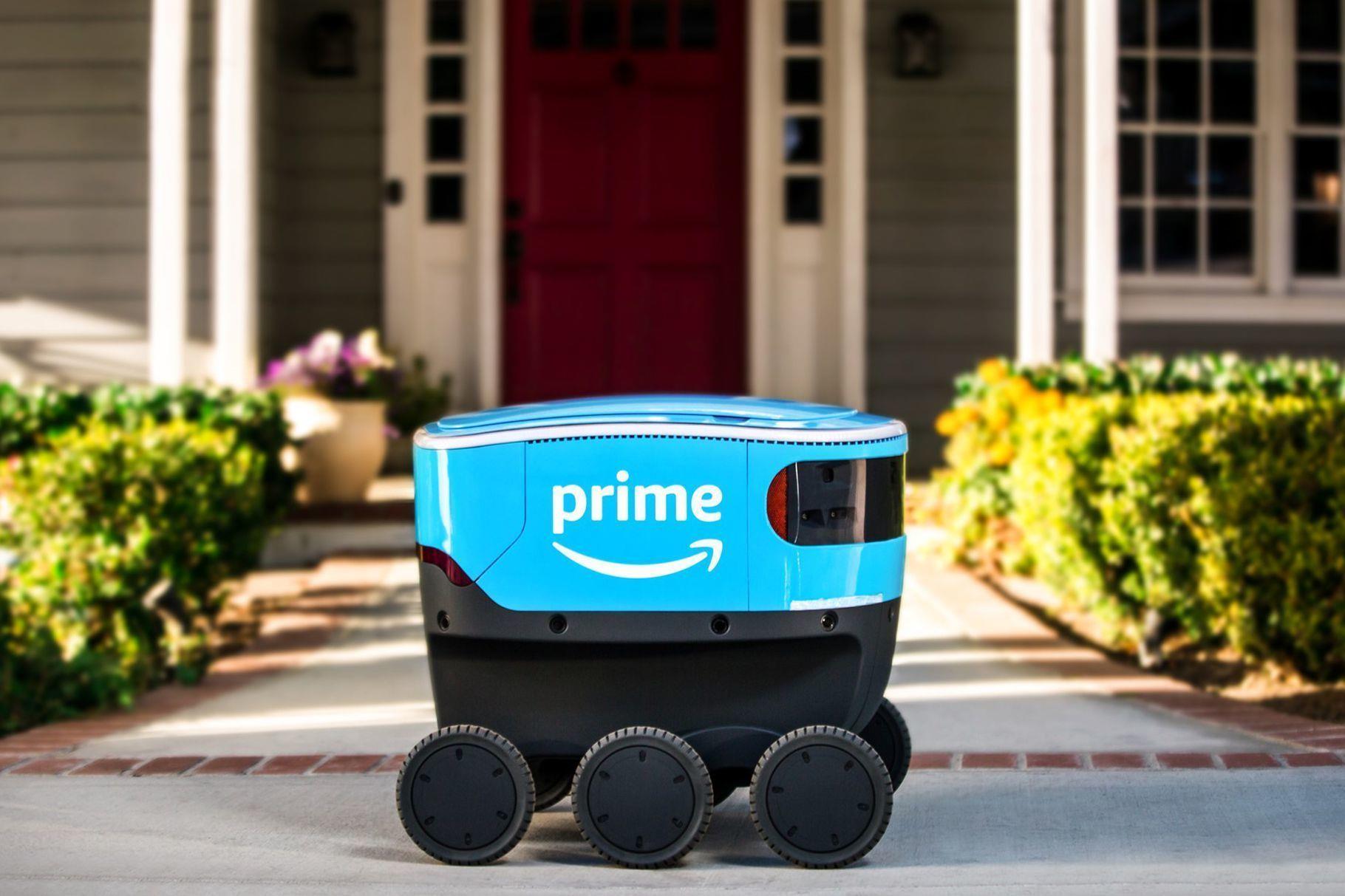 Related news
Follow the Amazon eBay Program to launch the Managed Delivery logistics service (Figure)
Successful Water Trial: Wal-Mart Delivery Unlimited will expand to more than 200 cities in the United States
Amazon's former CFO died in a car accident six years ago
The shadow behind Amazon Logistics:The first CFO was killed by its own delivery vehicle.
Amazon sagemaker, the golden tool for machine learning on AWS cloud, officially landed in China
Hot news this week
The developer of the dating app Tinder has reached an agreement with Google over billing rules for its app store
Still did it! Canada has banned Huawei and ZTE from participating in the country's 5G network on "national security" grounds
Red Elf Lightning erupts in the Himalayas Spectacular Spectacle: Experts Reveal What Exactly Is This?
The founder of the Internet Quick Hand Su Hua was taken away for investigation, and the fast hand responded: the news was not true
Wang Xiang, president of Xiaomi, explained that a shortage of low-end chips is a major challenge in overseas markets
Or for Studio Display Pro, the release of Apple's 27-inch Mini LED-backlit Display has been delayed by October
Tencent Q1: The business service business has "slightly decreased" year -on -year, and resource centralized video cloud and network security | View financial report
One picture to understand! Blue Factory has issued 3 new machines in a row: self-developed chip blessing, the narrowest lower border
Sony released the active noise-canceling headphones WH-1000XM5, equipped with 2 chips and 8 microphones
Tencent established a smart technology company in Chengdu, and its business scope includes Internet data services
The most popular news this week
How does the Internet make People Copy each other
Fed Vice Chairman: The future digital dollar may complement the coexistence of stablecoins and commercial bank currencies
ZHANG Pingan, CEO of HUAWEI CLOUD: The value of data governance in China has not been fully tapped Data and AI should be accelerated
Shenzhen Atmosphere! The sales price of mobile phones, computers and other products is subsidized by 15%
Microsoft shows third -party components: Win11 chicken rib function is saved
No need to grab it! Sony announced an increase in PS5 shipments
Audi advertising poster photos only sell for 8 yuan? Photographers question the unreasonable use of the photo purchase
Twitter spent $150 million to settle privacy and security lawsuits with the U.S. government
Hong Kong Hang Seng Index Opens 0.5% Baidu Hong Kong Stocks Open More Than 2%
Amazon's new CEO participated in a shareholders' meeting for the first time: to restore normal profit, ready to cut off the excess warehouse