At the beginning of 2020, Tesla will surprise the electric market. At the end of 2019, Tesla announced the delivery of 15 domestic model 3 in Shanghai Super factory, and on January 3, Tesla's domestic model 3 released the price reduction news. Tesla officially adjusted the selling price of the domestic model 1313 to 323800 yuan (including basic auxiliary driving function) from 355800 yuan. 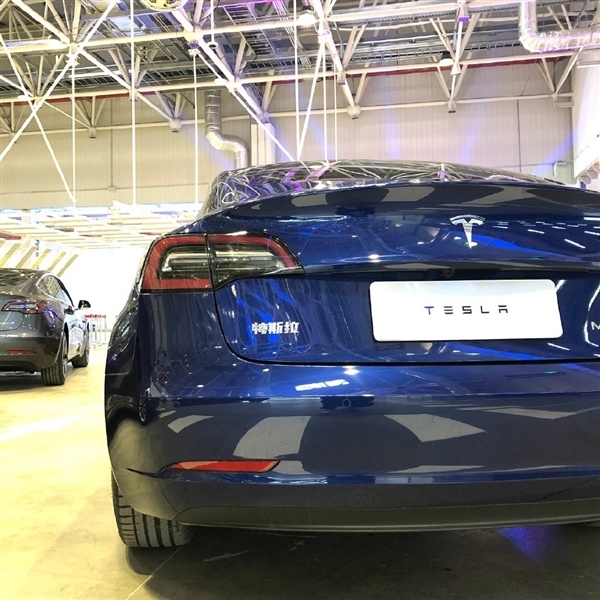 In addition to the official preferential policies, the purchase of the car can also enjoy the exemption of purchase tax and the state subsidy policy, with the subsidy amount of 2475 yuan. Therefore, the current subsidized price of the car is 29905 yuan.

Even if the price reduction is very strong, there is still room for further exploration.

According to industry analysts, Tesla Model 3 still has room for a price cut of 4-5 million, and if further cuts are made, then it will have a huge impact on the competition pattern of the entire auto industry.

Is there room for a reduction in domestic Model 3?

According to Deng Yongkang, an analyst at Anxin securities, localization of Tesla parts is imperative, and there is still room for price reduction in the future. Tesla plans to reduce the cost by purchasing more domestic parts, so as to reduce the import of parts to avoid tariff cost. It is expected that the localization rate will be increased to more than 80% in the third quarter, and the gross profit rate of single car will even exceed 30%. With the synchronous production of model y in the third quarter, the future will bring new growth points, and the global sales volume is expected to exceed 500000 in 2020.

Tesla's batteries are supplied by Panasonic. As Panasonic integrates the manufacturing of power cells into the super factory, Tesla will purchase materials independently, which may be replaced locally. In terms of motor and electric control supply chain, Tesla currently switches from AC asynchronous motor and traditional IGBT inverter to permanent magnet synchronous motor and SiC inverter, and the materials of permanent magnet motor will probably be purchased in China. If Tesla introduces more Chinese suppliers, the cost will be greatly reduced, and there is still room for price reduction in the future.

According to the analysis of public information, at present, Chinese suppliers are mainly concentrated in the three fields of powertrain system, central control system and charging system, and they have not entered the core supply chain system of domestic model 3. 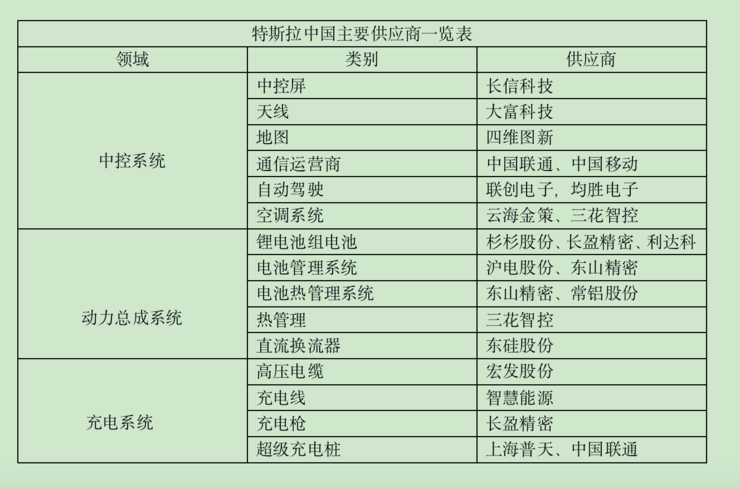 Although there is a large gap in new energy vehicles in China, there is no strong market-oriented demand, and the market will be slightly weaker as policy stimulus shrinks. At the same time, China has not yet formed a mature new energy auto industry chain, and whether Chinese suppliers can support Tesla's ambitions is unknown.

Domestic model 3 takes power battery system, automatic driving technology and FOTA technology as the core, as the key to support its competitive advantage.

The powerful cell jointly developed by Tesla and Panasonic, as well as the battery management system and battery cooling system independently developed, have built a moat in the core field of electric vehicles.

The power battery, as the power source of the electric vehicle, is the core part of the whole industry chain, and the domestic Model3 power battery system accounts for 32.4% of the total vehicle cost.

From 18650 battery to 21700 battery, Tesla and Panasonic have achieved independent research and development of battery monomer, and achieved a breakthrough in energy density, reaching 260-280wh / kg. Leading the Ningde era and BYD. (Ningde times and BYD are both 200-240wh / kg)

tesla battery cost is ahead of the industry and has fallen to $111/kwh at the end of 2018 and will be further reduced to $100/kwh. In the industry marks the total cost of electric vehicles will be close to or even lower than fuel vehicles, which is a milestone for the future of Tesla products and even electric vehicles.

In terms of autopilot, the domestic model 3 is equipped with autopilot system, camera as the leading hardware, hardware 3.0 chip, 8 cameras, 12 ultrasonic radars and 1 millimeter wave radar.

In addition, Tesla on the one hand, through the hardware system's powerful preemptive autopilot, on the other hand, through the FOTA air upgrade way to update the software, to ensure that the hardware system optimization potential can be realized. Compared with the OTA of other car enterprises, FOTA technology can iteratively carry out the underlying system, directly push the software patch to the relevant ECU, and complete the functional upgrade. But the vast majority of car companies can only achieve the vehicle system OTA upgrade

Then look at the competition pattern of China's new energy automobile market. At present, the most representative new energy vehicles in China are Weilai and Xiaopeng, and the two are also announced in public many times to the standard Tesla.

On the NiO day in 2019, the price of the new ec6 launched by Weilai has not yet been announced. Li Bin said: "Tesla has not yet announced the price and hopes to give ec6 some freedom."

Some analysts said that if the price of Tesla's domestic model 3 is further explored, the domestic new energy vehicle market will probably have a strong recovery under the leadership of Tesla. With the introduction of new joint venture models such as model 3, the supply side will be further enriched, and the cost performance improvement of b-end taxis and C-end independent brands are expected to bring increment, and the annual output is expected to resume high growth, which is expected to reach 160-1 800 thousand.

Related news
NVIDIA gives up Tesla brand in a low-key way: because of its name collision with famous electric vehicles
NVIDIA classic computing card series Tesla to be renamed: too confusing with Tesla
Hot news this week
The 560m Chinese woman who bought luxury homes has also been involved in JD.com's investments in Tuniu, Vipshop and Fafa Qi
Son's bet that ARM's listing will boost SoftBank's stock price?
China's first "smart factory" for offshore oil and gas equipment manufacturing has been put into operation
The largest professional wholesale market was granted an Internet payment license, and 449 million yuan became the actual controller of Fastlink
'We're all going to die' if South Korean government doesn't fix Semiconductor industry, former Samsung executive says
Us' sour Fox 'launched cyber attack on China, experts say, raising doubts it is preparing for a bigger cyber war
Safer than traditional invasive! China's first successful animal test of self-developed interventional brain-computer interface
More than 2.3 billion wealth management products exploded, and the big game factory suspected to step on the Thunder Wutu Mine Trust
AMD is expected to increase the power consumption of its RX 7000 graphics cards under pressure from rivals
Xiaomi invests in the establishment of semiconductor technology companies. Is the pine cones surging chip live?
The most popular news this week
The 5G version of "Huawei P50" is here: Snapdragon 888
China's top manufacturing standards! Hongqi N701 real car debut: only 5 annual output
The total amount is 200 million yuan! The consumer coupon of this place is grabbed at noon today: the picture of the strategy of the use of the strategy to understand
Apple's former top lawyer has pleaded guilty to insider trading using earnings data to make $4 million in illegal profits
Reporter investigation: "replace China"? What's going on behind India's chip ambitions?
The worst quarter of the American technology giant: Amazon plummeted 35% of Tesla's breaks below the record
How does Nvidia also "China Recruitment" facing online ransom attack companies to prevent problems before they occur?
Apple updates CarPlay this autumn: can buy gasoline directly through the vehicle screen
Twitter poached a new co-head from NBC Universal
Apple, Samsung pull out as Chinese smartphones take two-thirds of Russian market