Can the AI chip company make Siri smarter when it's bought by apple for $200 million?

According to the report of PWC in the fourth quarter of 2019, the field of artificial intelligence is the second highest emerging field in terms of trading activities, second only to financial technology.

The acquisition of AI start-ups and the enhancement of their talent and product competitiveness have long been the tacit fact of the giants. Technology companies, including Google, alphabet, Facebook and Microsoft, have long preferred acquisitions to expand their AI talent pool. Apple is no exception.

According to a source, apple recently bought xnor.ai, a start-up company, for about $200 million. Although the two sides have no objection to the purchase, they are "dead.". It is understood that XNOR was founded in 2017 and is headquartered in Seattle. Its products can run on smart phones, cameras, drones and even embedded low-power mobile CPUs without relying on cloud computing, which coincides with the user privacy policy that Apple has repeatedly emphasized in recent years.

The layout of giants in the field of AI has never stopped.

Although apple and xnor.ai declined to comment on the news, apple said in an email to CNBC, the US financial media, "Apple will buy smaller technology companies from time to time, and we usually don't discuss our goals or plans." whenever Apple confirms that it has bought a company, it will make the same response. Currently, xnor.ai is based on This offline. 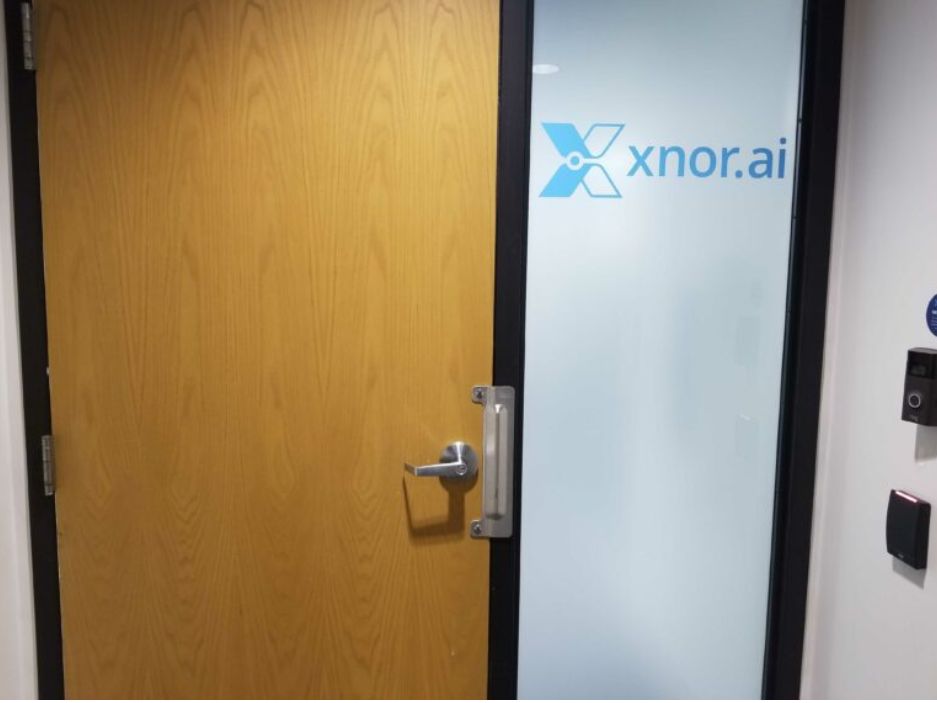 Founded in 2017, XNOR is headquartered in Seattle with 54 regular employees. 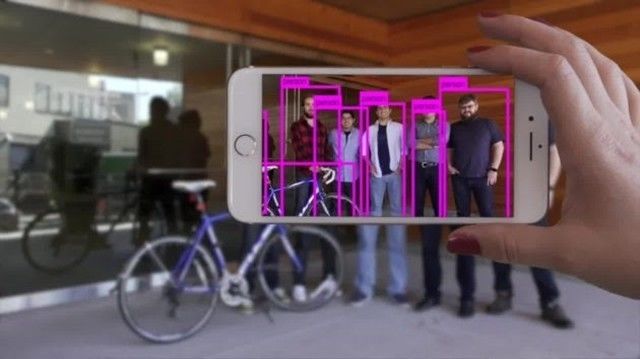 Before the acquisition, XNOR raised about $14.6 million from investors such as the madrona venture group in Seattle.

Xnor.ai's technology allows companies to run their software on devices with fewer computing resources, rather than in data centers with powerful computer clusters. XNOR promises to keep the data completely confidential, and its memory load and energy demand are low. Their products can run on smart phones, cameras, drones and even embedded low-power mobile CPUs without relying on cloud computing. 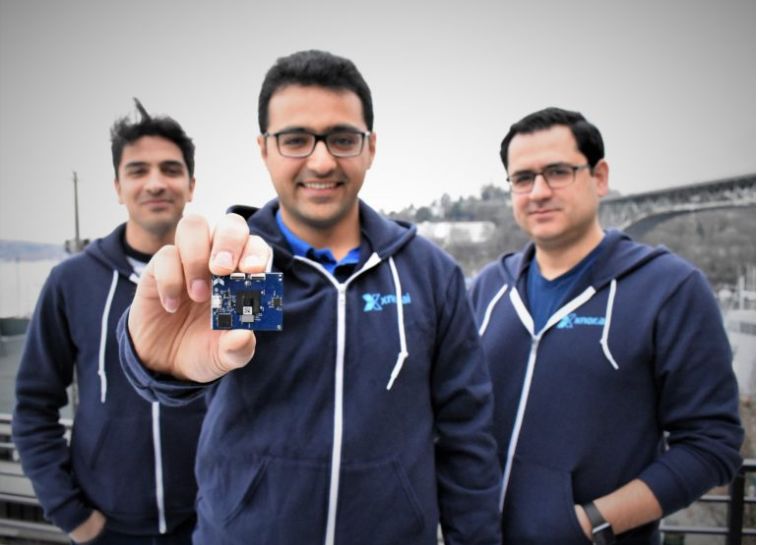 According to the source, Apple may integrate XNOR's technology into future iPhone models, improve Siri and other tasks based on artificial intelligence and machine learning, or use it to provide core edge computing capabilities for application developers, which is consistent with the company's interest in protecting data privacy.

In addition, XNOR has built a "self-service" platform to make it easier for developers to use AI code and data in their applications, which fully confirms the company's motto "Ai everywhere, for everyone".

In 2019, XNOR developed a stand-alone AI chip that can run on solar or coin sized batteries to automatically monitor gizmos on grocery store shelves. In addition, it reached an agreement with wyze labs to place its edge based human identification technology in the wyze labs low-cost security camera.

It is worth mentioning that because XNOR has excellent edge computing ability, the independent AI chip developed by them can run on a device with solar panels the size of coins for many years. Therefore, on the list of the most promising AI companies in the United States nominated by Forbes, XNOR ranks 44th.

In addition, it also shows that Seattle plays an increasingly important role in AI2 incubator, Microsoft, Amazon and other giants to cultivate artificial intelligence.

Given Apple's strong interest in privacy issues, it's no surprise that it has acquired technology to handle AI on its terminals. Apple has bought other similar AI companies in the past, such as turi.

Xnor.ai's work may be integrated into future iPhones to improve Siri and other AI - and machine learning based tasks on devices.

For a long time, technology companies including Google, alphabet, Facebook and Microsoft have been more interested in using acquisitions to expand the pool of AI talents and enhance their products, and apple is no exception.

In May 2018, Apple CEO Cook said in an interview that in the past six months alone, Apple has acquired 20 to 25 companies. In fact, Apple has been "ready to move" in the field of artificial intelligence in recent years. According to cbinsights, Apple has been far ahead of AI startups.

In the past few years, in the field of AI, Apple has acquired a number of start-ups, including lattice data, turi, emotain, etc. 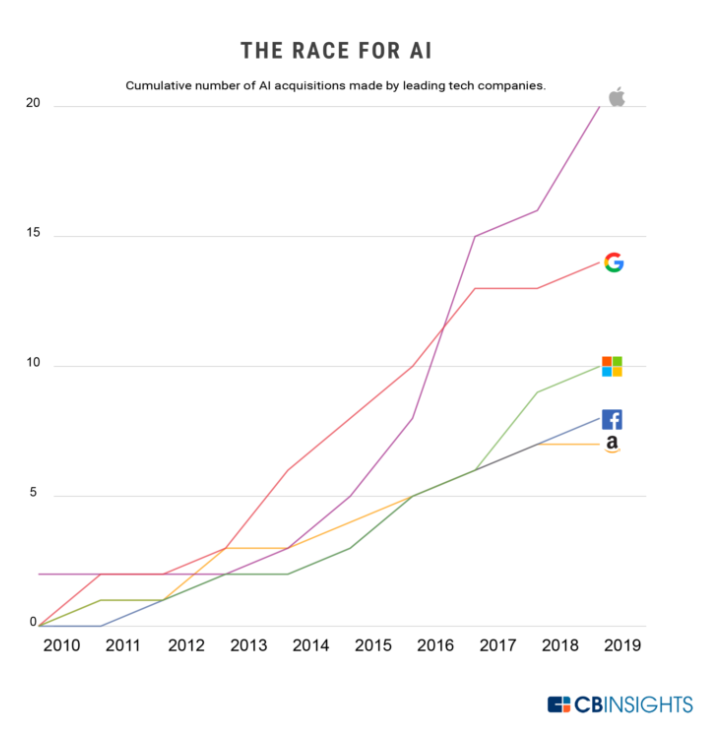 In May 2017, apple acquired lattice data, a silicon valley machine language start-up company. It is reported that the acquisition price is about $200 million, which is equivalent to the acquisition price of xnor.ai and turi. Lattice data uses the inference engine driven by artificial intelligence technology to transform unstructured "dark data" into structured data with higher availability. The so-called "dark data" refers to the large amount of unstructured data generated by the Internet digital world every day, which accounts for 70-80% of the total data.

With the addition of turi, for apple, the acquisition of turi and its technology will not only directly benefit Siri, but also bring more "intelligent" elements to Apple Music and app store.

In January 2016, apple acquired the artificial intelligence company emotient. Emotient mainly uses the camera to capture and record the facial muscle movement, and analyzes the facial expression according to its calculation model, and finally obtains the dynamic results about the expression. At present, emotient can distinguish basic expressions like joy, anger, sadness, surprise, etc., and can also analyze some more subtle and complex expressions, such as anxiety and depression.

In 2018, investors invested a record $9.3 billion in U.S. AI start-ups, almost double the previous year's total. According to the report of PWC in the fourth quarter of 2019, the field of artificial intelligence is the second highest emerging field in terms of trading activities, second only to financial technology.