According to data provided by Indiana University, the Big Red 200 supernumerary initial planning computing performance is 5.9P Flops (590 million floating-point computations per second), using the Tesla V100 acceleration card, but upgrading the next NVIDIA GPU to 8P Flops, and the number of GPUs required is even smaller, because the new architecture (that is,7nm Ampere) can bring 70-75% performance improvement!

70% of the performance improvement is already strong, but this may not yet be the real strength of 7 nm amperes, and the results calculated by twitter user dylan 522p are even more surprising because the 7 nm ampere gpu has improved its performance by more than 100%. 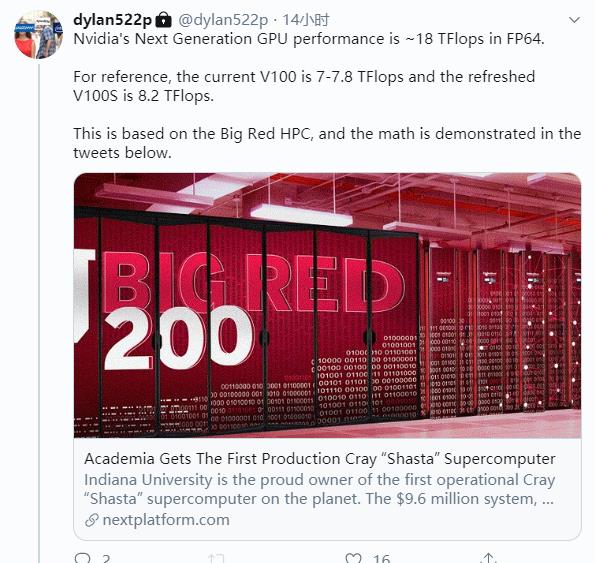 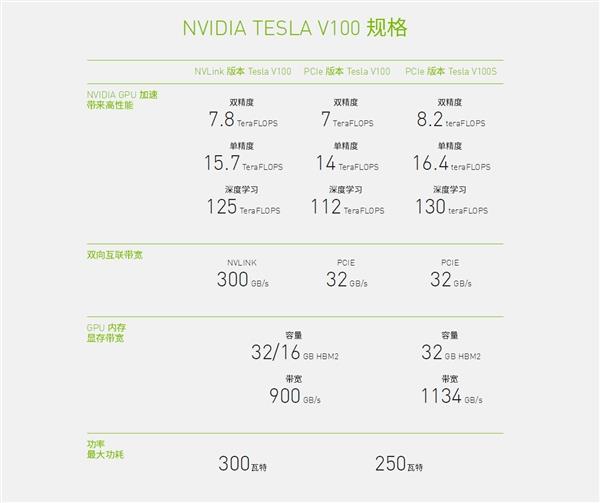 Among the Tesla series accelerators, fp32: fp64 is 2:1, that is to say, the fp32 performance of 7Nm amp graphics card can reach 36tflops, which is more than twice the current performance of my Tesla V100 series, and the latter is the strongest but 16tflops. 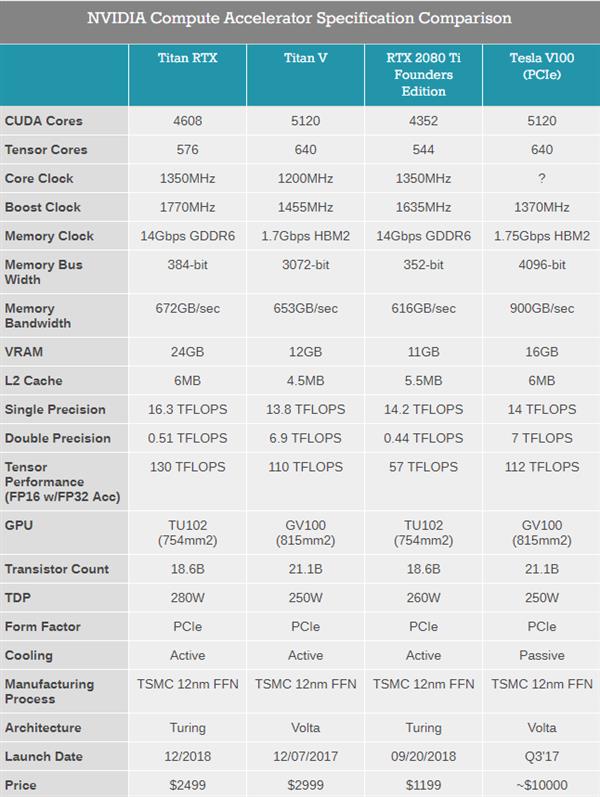 Of course, how game-level 7nm Ampere ended up is hard to say, because NVIDIA's recent generations of GPU Tesla and Ge Force series are separate, RTX graphics card for the 12-nm Turing GPU full version of only 4608 CUDA core, Volta is 5120, and game GPU's FP64 performance castrated to 1, comparable only FP32:32 performance, TU core with GV100 core FP32 performance almost all around 14-16 TFLOPS.

Related news
After Ampere Amp: NVIDIA's Next Generation Graphics Card Core or Code Hopper
NVIDIA has registered hopper trademark and the next generation of 5nm GPU is coming to light
NVIDIA's next generation GPU starts with ga100 core TSMC 7Nm process
NVIDIA is expected to release the new GPU core "ampere" in March this year: created by Samsung 7Nm
NVIDIA is not a dream to improve the performance of 7Nm ampere GPU with hydrogen bomb level by 100%
12 nm demobilized TSMC received NVIDIA 5 nm GPU order
NVIDIA releases 7Nm ampere: the biggest performance leap in the history of 54 billion transistor nuclear bomb and GPU
Nvidia reportedly chose Samsung's 8 nm process for RTX 3090 Ampere GPU.
Hot news this week
Female graduate students leave school to give birth to the hot debate is hype? The husband has set up a webcast company
How much is 4G than 5G! Huawei Mate50 network speed detailed measurement 6799 yuan to buy explosion money?
It's hard to find a machine! Huawei Mate50's first sales: oxen can not buy the price of 10,000 yuan to grab the price
Huawei City's proportion is the first! Survey: Northerners love to use folding screens more than southerners
Our global car he is a special car for China! Saic Volkswagen and FAW-Volkswagen are fighting each other
Chongqing Xiaomi Consumer Finance Co LTD has been fined 500,000 yuan for misappropriating consumer loan funds
Are they really aliens? The US Navy confirms there are multiple UFO videos: but they cannot be made public
The second phase of the main structure of Xiaomi intelligent factory is completed to see the delivery at the end of next year
In order to change the iPhone 14: Women's net red sells old phones and comes with a large number of private photos
4 million units are not enough! Huawei Mate 50 seconds sold out of the hack, the maximum price of 10,000 yuan to earn crazy
The most popular news this week
China's first pure electric convertible! Wuling Hongguang MINI EV Convertible Edition Listing: 99,900 yuan
Samsung applying for a dual -screen camera patent to support face recognition
There's a tidal wave of lying down, and ceos of big American companies are worried, saying, "Never seen anything like this."
Tesla sales response "disguised price reduction of 8000 yuan" : for the end of the quarter impulse, temporary activities
Apple iPhone 14 standard version is not good for sales, Lixun precision may face the risk of ordering orders
Billions of euros in investment, Intel Italy chip factory will be located in the Veneto region, sources said
China Mobile to develop 5G Tidal Smart Antenna: Where the crowd
Huawei Smart Screen New Products Tomorrow: Sub -looking 75 and 86 sizes of the sub -brand
Apple conscience: AppleCare+User iPhone can repair unlimited times
From January to July this year, my country's industrial software product revenue reached 121.9 billion yuan, an increase of 8.7% year-on-year